Trouble in the Nooksack River Watershed 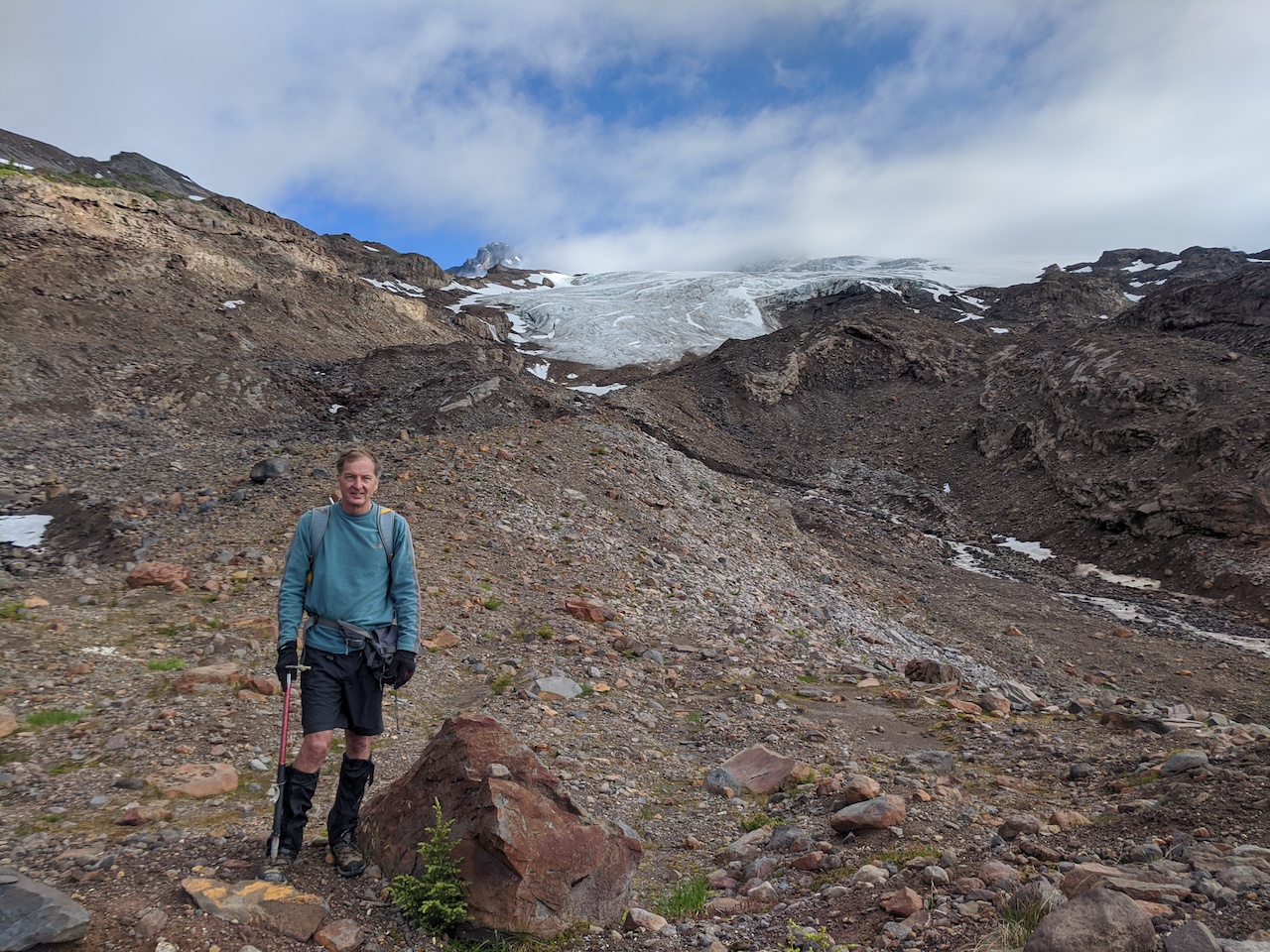 Dr. Mauri Pelto, director of the North Cascades Glacier Climate Project, in August of 2020, stands at the location at which the Easton Glacier ice terminated when he first took measurements at the field site in 1990.
photo: Mariama Dryak

For those of you who read Whatcom Watch, you will know that the North Cascades Glacier Climate Project (NCGCP), which has been tracking glacier change over the past 38 years, has recorded a significant loss of glacier ice on all monitored glaciers in the North Cascades — acting as an alarming indication of climate change in our very own backyard. How you may or may not have framed that glacier change in the past is in the context of its relevance to our local water resources.

Glaciers are an incredible natural resource that influence many things related to local climate and ecosystems critical to the Mount Baker and Mount Shuksan region as we know it today. Not only that, but, when considering the significance of glacier and perennial snowpacks to people globally, we find that 1.9-billion people rely on them as their main water resource (1). For context, there are 7.9-billion people on the planet, so that number is the farthest thing from insignificant.

With so many people reliant on snow and glaciers as their primary source of water, changes to these resources under climate change can have significant consequences to water availability for people in these regions. Water from glacier melt in the North Cascades acts as a resource for water uses related to hydroelectric energy production, fisheries, agriculture, and drinking water. Approximately greater than 50 percent of Whatcom County residents source their drinking water from the Lake Whatcom Reservoir, which is fed by rainfall within the Lake Whatcom watershed and meltwater from the Deming Glacier located on Mount Baker, flowing to the Middle Fork of the Nooksack River and into the reservoir (2). 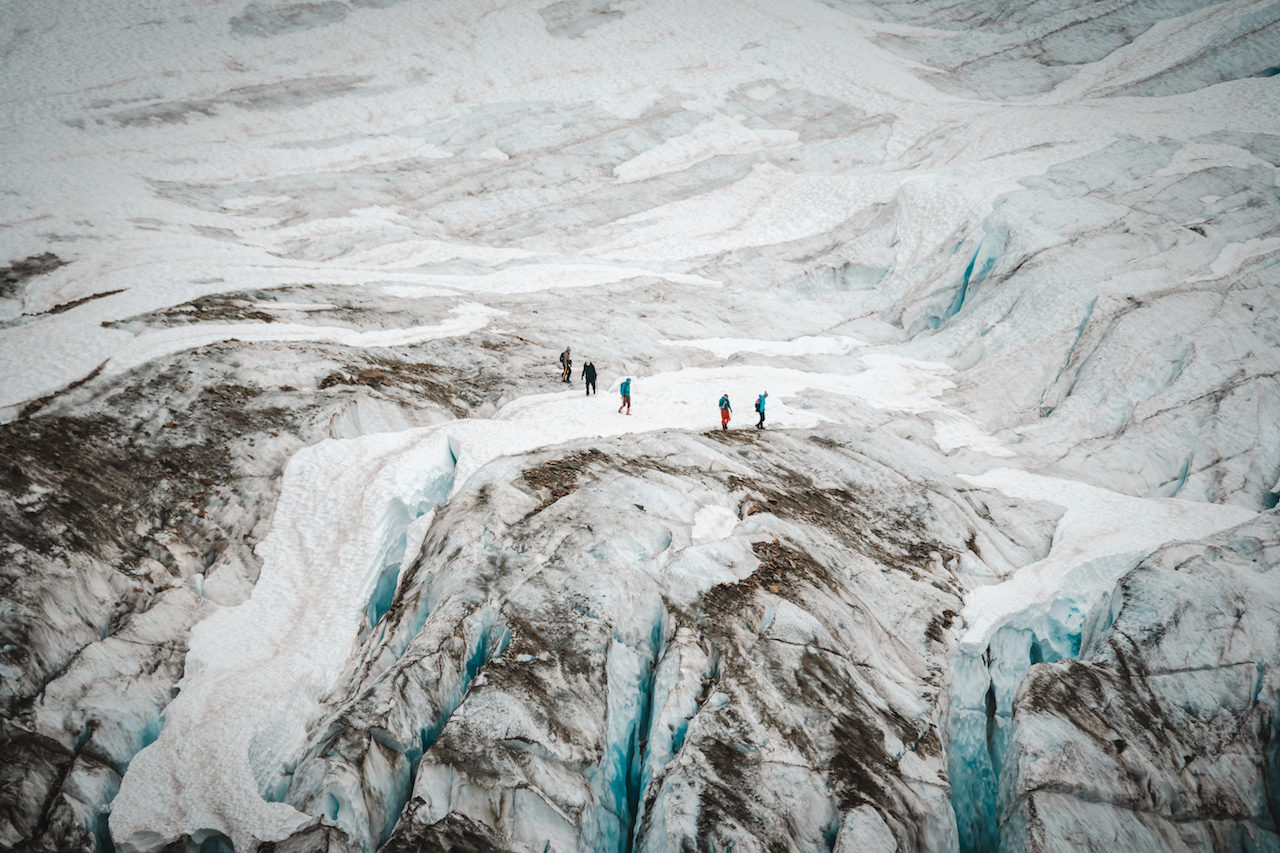 Peak Flow Earlier Now
With changes in climate leading to less snowpack and smaller glaciers, the timing at which snowpack and snowmelt-fed rivers reach peak flow in the western United States is shifting to earlier in the season in comparison to peak flow trends since the 1950s (3). This smaller snowpack is due in part to decreasing snow storage in the mountains, and snowmelt streamflow occurring earlier in the season (3).

In the context of the North Cascades, we know that glacier melt peaks in the summer, and, if there is less snow on glaciers to insulate them from melt, more glacier ice ends up being melted during summer heatwaves, contributing to continued glacier retreat. However, in the short-term, this glacier meltwater plays an important role in keeping river temperatures cool enough to support fish populations that can only tolerate temperature ranges that have previously been supported by snow and glacier meltwater runoff — such as the threatened species of Chinook salmon (4). 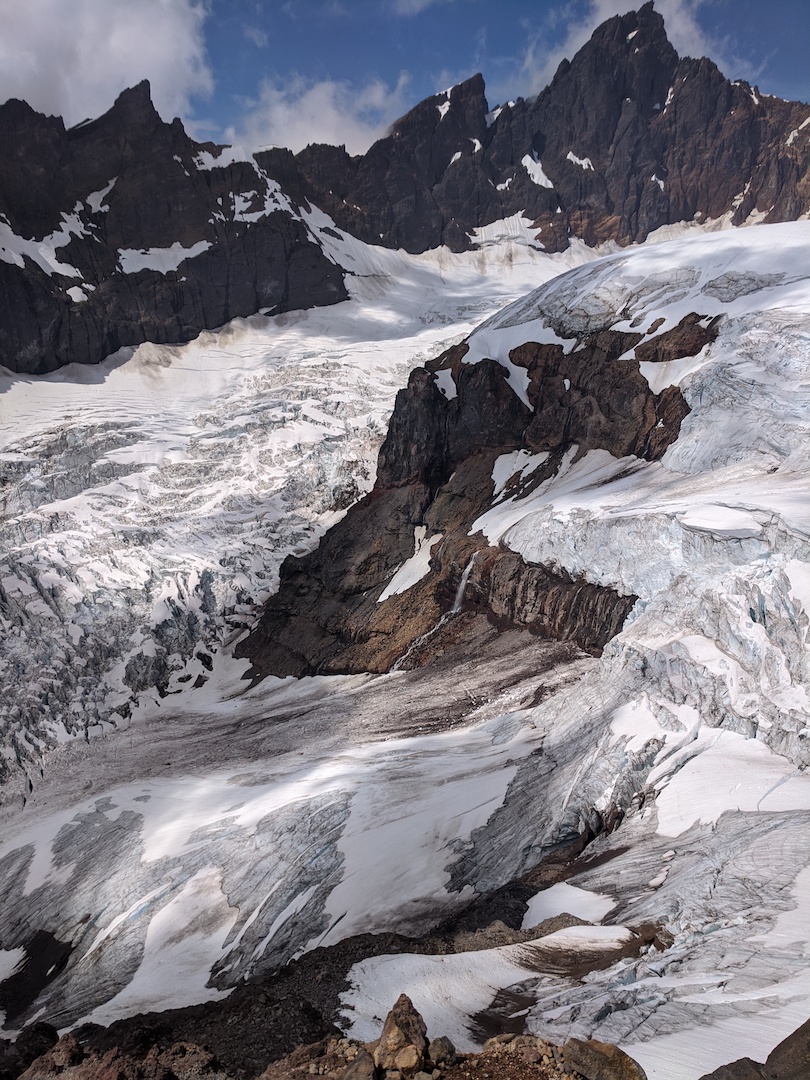 A striking view of the Deming Icefall that North Cascades Glacier Climate Project field assistants were greeted with after a couple days of taking glacier area and snowpack measurements on the Easton Glacier in August 2020. In recent years, this striking rock outcrop has become more visible over time as ice and snow no longer hide as much of it at the end of a melt season.
photo: Mariama Dryak

The presence of snow and glaciers upstream of a river can play an imperative role in supporting ecosystems that rely on specific water temperature ranges to be in balance. Recent research, conducted by the head of the NCGCP, Dr. Mauri Pelto, is sharing the critical importance of glaciers to keeping stream and river temperatures cool enough throughout the summer that they can support salmon populations, some of which are only able to survive in a temperature range of 12°C to 19°C (5).

Conversely, during heatwave events, flow rate volume decreased in the South Fork of the Nooksack River by an average of 20 percent (5). Overall, the study emphasized the importance of glaciers to maintaining flow rate volumes and temperatures in rivers important to sustaining threatened salmon populations (5).

An example of the ameliorating effect that glaciers have on river temperature was evident during the heat wave of September of 2021 that led to the die off of 2,500 adult Chinook salmon in the South Fork Nooksack River (6, 7), notably devoid of glacier meltwater influx upstream, when the North Fork of the Nooksack River remained cool, preventing a die-off of similar magnitude in that location. Predictable river water flow volume and temperature are imperative to maintaining healthy rivers and ecosystems along them as they have previously existed, as well as to keeping drinking water resources safe and flow rate consistent — to be usable by the humans who rely upon them in the same ways as they have been used previously.

Pelto’s recent research is supported by a study by Frans et al. which used a model to predict changes to glacier extent and streamflow between 1960 to 2099 (8). Their conclusions suggested that, in higher elevation areas, before glaciers become too small to support historic streamflow levels, meltwater from glaciers will help compensate for projected late summer streamflow (8). Their modeling also shows that, in lower-elevation areas, lesser snowpack and continued retreat of smaller glaciers will result in lower streamflow (8), as witnessed in the South Fork of the Nooksack River over the past decade by Pelto.

There is good news, and that good news is that the region (referred to as WRIA 1, which covers most of Whatcom County) has a Watershed Management Project in place. In 1998, the Washington state Watershed Management Act “required all participating local governments to address water quantity, with the option of addressing water quality, instream flows, and fish habitat” (9). The watershed management board for the region has a two-caucus structure, including one focused on salmon management, and another involving local government entities (9). The management of the former is driven by the Lummi Nation, Nooksack Indian Tribe and Washington Department of Fish and Wildlife, which have launched the WRIA 1 Salmon Recovery Program (10).

Why We Care About Salmon
Salmon have been a culturally significant part of livelihoods in the Nooksack Indian Tribe and Lummi Nation throughout time, and, as noted in individual letters from the nations to Governor Inslee in December 2021 in response to the Chinook salmon mortality events in September 2021: “harvestable fish and shellfish are critical to the … way of life” of the Nooksack Indian Tribe and the Lummi Nation (6, 7). Furthermore, if warmer water temperatures continue to be such that salmon habitat can no longer be supported in area and the species is lost, those alterations to one component of an ecosystem can have trickledown effects on other parts of that ecosystem. Such effects have the potential for continued change in ecosystems that starkly contrast how they have functioned previously.

Long-term monitoring programs, such has the NCGCP and data collected on surface water (temperature and discharge) resources using stream gauges by the United States Geological Survey (USGS), play a critical role in understanding how (eco-/earth-) systems have existed in the past and how they are changing through time. For, if we do not have the knowledge and data to understand the past, we lack data-based tools to understand how the present and future may be different, along with the information to comprehend the implications of those differences. Additionally, the context provided by long-term monitoring programs can help us build resilience to climate change. However, these things only hold true if we follow what these long-term data are telling us regarding action.

Given the mass die-off of Chinook salmon this past fall, caused by very warm water temperatures along with continued climate change, we know that action is necessary to prevent further ecosystem change. Conservation-based land management practices along riparian buffers — one such example of action — are critical to keeping river waters cool (11). This could and should look like many things, including but not limited to:

A. riparian restoration projects focused on promoting cool water refugia for fish species who need it;

B. riparian buffer tree plantings and maintenance to shade our rivers to cool the waters cool;

C. continued and new investment in ecosystem monitoring projects and modeling to understand the future;

D. financial and volunteer support for organizations who are already doing critical work to keep our waters and ecosystems within it clean, cool and healthy.

Necessary action is something not separate from you, but rather something in which you can take part — be it through advocating for aforementioned management practices, volunteering your time to make them happen, supporting long-term monitoring programs, and/or using your voice to suggest mitigative action against climate change now rather than adaptive action later. After all, it is not the voice and action of one or a few people or groups that will lead to positive changes for our ecosystems and water resources, but rather the collective voices and actions of many.
_______________________________

Mariama Dryak is a glaciologist, climate change scientist, and environmental educator drawn to the mountains and finding solutions to the global climate crisis. She worked with the North Cascades Glacier Climate Project field team in 2018 and 2020.