In response to an invitation to my sister’s housewarm­ing in San Francisco, Cindy said, “Let’s go!” At first I was taken aback by her quick response but it was proof positive that we were ready for one of our favor­ite things to do … a road trip! It was no surprise that I, as chief navigator/logisti­cian and lead birdwatcher, would immediately start the scouting process. This process usually involves everything from choosing a route and hotels along  the way to connecting the dots with potential stops for birds!

Our first day involved a dedi­cated effort to drive for twelve hours to put us into position for an easier second day and a more leisurely drive into San Francisco. In the back of my mind and draw­ing from past trips along the I-5 corridor, I knew that there was a wonderful place to do a little bird­ing just 50 miles down the road from our overnight stop in Red­ding — the Sacramento National Wildlife Refuge. Past trips to this refuge have made it a requisite visit, especially if you’re in the area anyway. 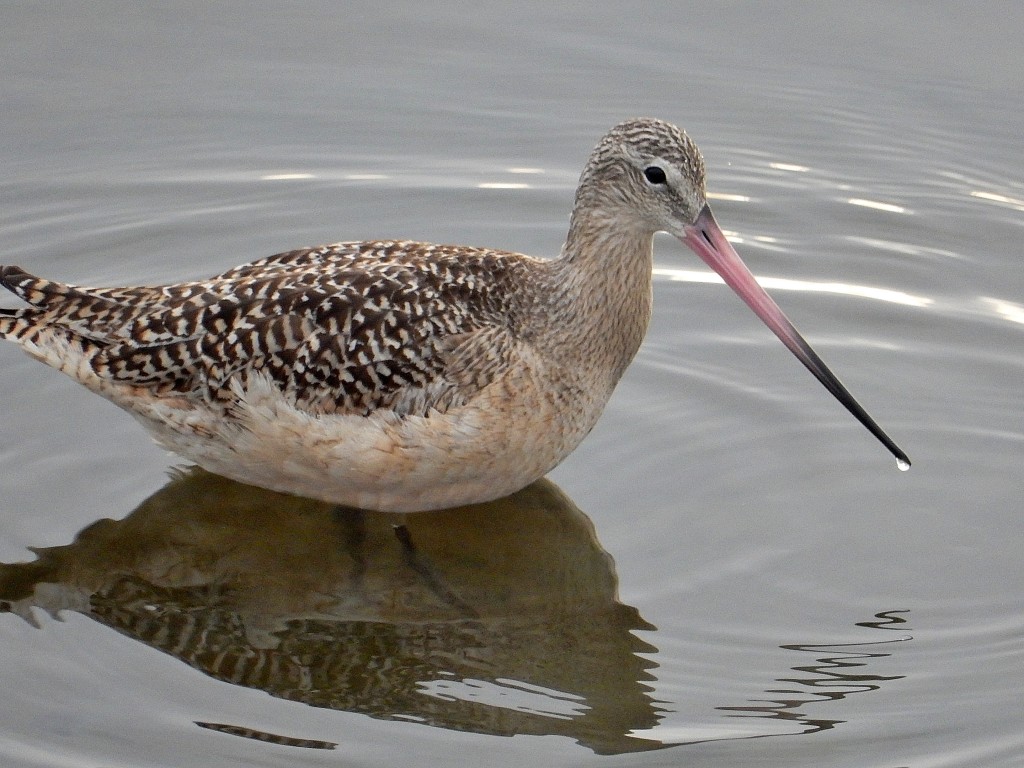 The refuge was established in 1937 to provide sanctuary and breeding habitat for migratory and resident birds. Part of the motivation for creating the refuge was to prevent crop depredation in the surrounding agricultural fields. More than a million waterfowl of several species utilize the refuge during the winter and numer­ous shorebird species rely on the protected wetlands as an integral stopover to and from their nesting grounds. It is part of a complex of seven different areas combining over 10,000 acres of wetlands, grasslands, and riparian habitats. This bird-friendly area is ap­proximately 70 miles north of the metropolitan area of Sacramento, the capital city of California. The part of the refuge that we visited is seven miles south of the town of Willows and is very accessible for as long a stop as your schedule allows.

There are plenty of trails for walking from the main parking area but the motor route that goes through the heart of the refuge is the best way to see a wider variety of birds. With reminders along the way, you’re encouraged to stay in your vehicle to maximize your chances of seeing more birds. At times, snow geese will crowd the road and slow traffic to a halt. On this trip we had great views of American avocets, black-necked stilts, western meadowlarks, and numerous waterfowl species. Cin­dy won the day with a sighting of a well-concealed great horned owl.

After a morning stop at this great refuge, we continued our way southwest to Tony Bennett’s favorite city by the bay. My sister had the entire weekend planned so we were wined and dined on our first night at a Cajun restau­rant near the civic center; then at her new West Coast residence on Russian Hill; and finally a Sunday morning brunch at my nephew’s place in Corona Heights. After six hours on foot exploring Fisher­man’s Wharf and the Embarcadero and the house warming Saturday night, I was ready to take on my sister’s newest favorite hotspot for birds on Sunday morning — the Crissy Field Tidal Marsh.

The very accessible area is one of many chapters in San Francisco’s unique history. Once a U.S. Army airfield, Crissy Field is now part of the Golden Gate National Recre­ation Area under the administra­tion of the National Park Service, which took control in 1994. The site was used as a hazardous waste dumping ground by the military so the primary goal involved a major cleanup, and by 2001 it was opened to the public. Many of the old buildings have been preserved and utilized for other uses, but the main appeal is the lure of open space to San Franciscans. With sweeping views across the bay to the Golden Gate Bridge and the somewhat infamous Alcatraz Is­land, this is an easy place to spend a few hours. If you’re a birdwatcher, you will need more than a few hours.

With coffee to go, we spent time at Crissy Field on Sunday morning and the birding was fantastic. The birds are obviously habituated to the area and the admiring humans that stop to see them; although the majority of people were running, walking, biking, etc. Those of us who were there to see birds were not disappointed, especially yours truly. We had excellent views of shorebird species including long-billed curlew, marbled godwit, least sandpiper, and willet. Snowy egrets posed for us and were mostly oblivious to our stares.

True to the old adage, San Francisco is a wonderful place to visit. Crissy Field highlighted our weekend visit to the other city by the bay and it was with some re­luctance that we left, but a family brunch was on tap to see us off on our return trip northward. While we didn’t see any of the parrots of Telegraph Hill, I did hear a couple flying by as we ascended the Filbert Steps, an oasis of green in that larger-than-life city.

We spent the first night of our return trip in Eureka, about five hours north of San Francisco. If we had the luxury of time we would have chosen to travel north on the scenic Highway 1, which takes twice as long and is twice the mileage. From past trips, I knew about the birds and the scenery on that route but Bellingham was calling. There was, after all, more birding to do the next morning at the Arcata Marsh.

The Arcata Marsh Wildlife Sanctuary is 307 acres of marshes, mudflats, and grassland along the north­ern shore of Humboldt Bay. More than 270 spe­cies of birds utilize this unique refuge throughout the year. What makes it so distinctive is that the sanctuary is a part of the comprehensive wastewa­ter treatment plan for the city of Arcata. The interpretive center near the ample parking lot is a good place to begin your walking tour. Local envi­ronmental consciousness and hard work produced a model for many cities to embrace. Like the Crissy Field Marsh in San Francisco, this is yet another conservation/habitat res­toration success story that benefits everyone.

At the Arcata sanctuary, fresh and salt water combine with treat­ed water to create an ideal stopover habitat for migratory birds and prime nesting opportunities for a variety of other species. Gatherings of as many as 300 black-crowned night herons would be incentive enough for any birder to stop at Arcata. On our short, off-season visit we saw seven of these elu­sive birds, tucked in for the day. Pied-billed grebes, snowy egrets, and yellow-rumped warblers were augmented by large flocks of cack­ling geese flying overhead. Parts of this sanctuary provide open views to Humboldt Bay and open water species like loons and common murres. You can view a compre­hensive list of birds at the marsh along with more info through their website at http://www.humboldt. edu/arcatamarsh/birds2.

We left Arcata by mid-morning and headed north. Our plan to bird the Oregon Coast on the way home, however, was postponed due to a massive landslide that closed Highway 101 to all traffic north of Florence. Our only choice was to stop for the night in Bandon before heading inland to the Interstate and then home. On the windswept beach with pounding surf the next morning, two dozen black oystercatchers were out just after sunrise. The large, black birds behaved a lot like sanderlings, dodging the incoming waves while searching for morsels in the sand. The stinging rain and wind ended our run of fair weather and a storm was on the way. That storm fol­lowed us all the way to Bellingham.

In all, our relatively quick trip to San Francisco and back was quite rewarding in every aspect. Recon­necting with family and friends is always good to do, and visiting a few birding hotspots along the way adds to the enjoyment of a well-rounded road trip. Now, we can start planning for the next one, wherever that might be!