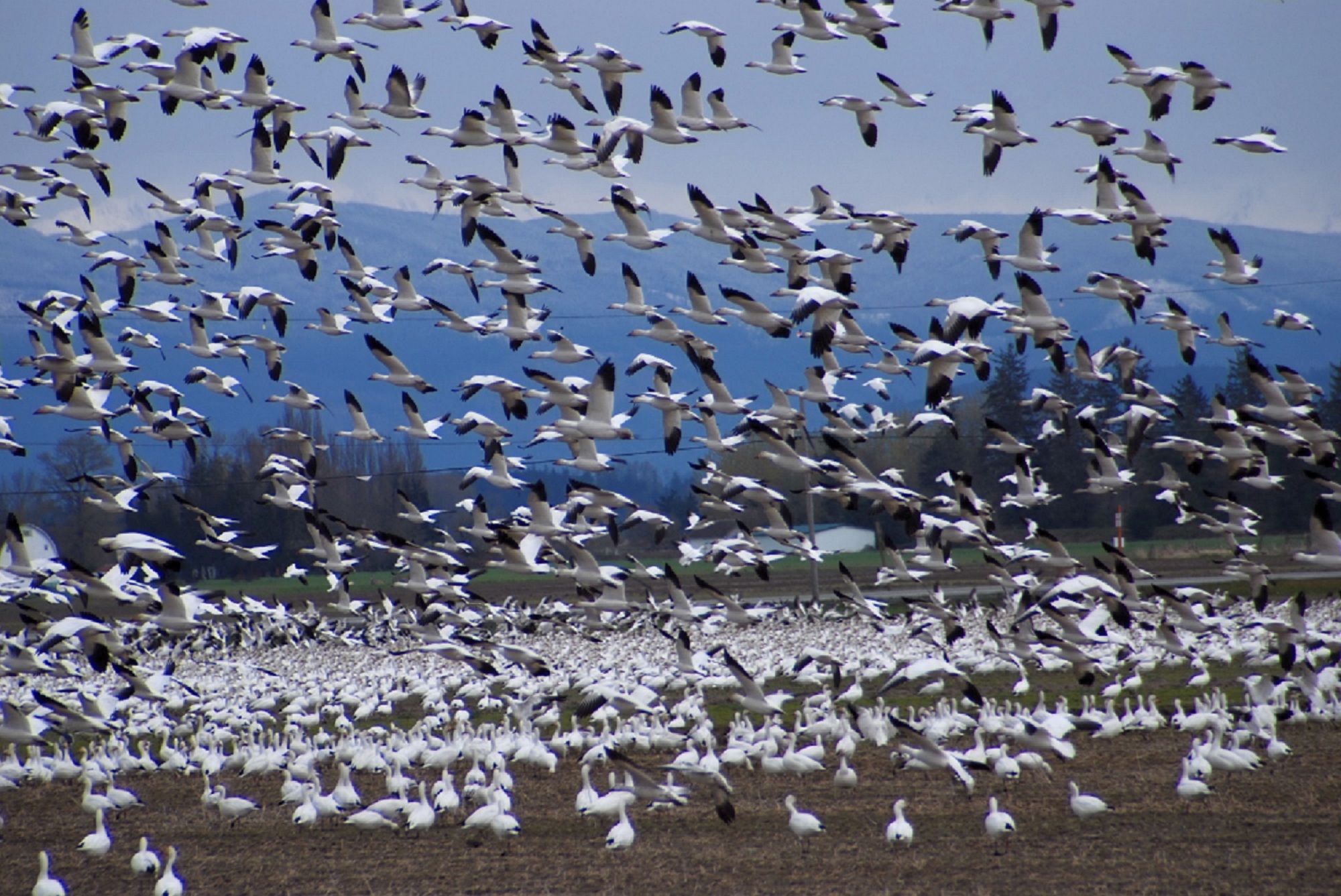 Annual rainfall is rising in Whatcom County, bringing with it big storms and increased water pollution in the form of heavy runoff from roads and hard surfaces (1). Runoff carries toxic crud such as oil, pesticides and fertilizers into the nearest water sources, including Lake Whatcom and Bellingham Bay.

Stormwater treatment is essential for the health of Bellingham Bay’s ecosystem and the various wildlife that call Whatcom County home. Each autumn, coho salmon swim up the Nooksack River to spawn. Studies by federal fisheries researchers (2) found that, when exposed to stormwater collected from a Seattle highway, coho became sick or died within four hours. Those that survived the initial four hours were dead by the end of 24 hours.

Runoff has also been linked to a number of human deaths. In 2015, a San Diego surfer died of a staph infection and two of his friends fell severely ill after going out in the water less than 72 hours after a major storm. Officials there warn locals not to enter the water for at least three days after a storm because of the amount of bacteria that collects in the ocean from stormwater runoff.

While Bellingham Bay might be too cold for us to take a dip at this time of the year, it’s easy to imagine the effect runoff has on plants and wildlife.

In an effort to curb the amount of stormwater entering local waters, the city has installed rain gardens and other green infrastructure. Bellingham has teamed up with Stewardship Partners (3) and Washington State University Extension to bring 12,000 rain gardens to the Puget Sound area. So far, 72 rain gardens have been installed in Bellingham.

“Even that’s a drop in the bucket” compared to the amount of water that enters the bay from streets and roads, said Freeman Anthony, a Bellingham engineer in charge of rain gardens and other clean-water projects.

Although this infrastructure helps absorb stormwater, the question remains whether the new developments will effectively protect our waters when Bellingham gets drenched by the next big storm.

Currently, stormwater is processed at the Post Point water treatment facility on Mackenzie Avenue near Marine Park and the Fairhaven Shipyard. A 2014 upgrade to the system enables the facility to handle up to 72 million gallons of water a day, which goes through a treatment process before being released into Bellingham Bay. The plant removes 95 percent of organic matter and solids before the water is released.

Rain gardens are typically placed in parking lots or other heavily used paved areas. When it rains, runoff drains into the garden, allowing the water to be filtered naturally through the soil rather than entering the sewer treatment system. The city built its first rain gardens in 2004, one in the City Hall parking lot and the other at the Bloedel Donovan Park parking lot.

The city looked at alternatives to rain gardens, the most effective of which was in-ground vaults. These vaults collect excess stormwater to avoid overflowing the sewer system. They are widely considered to be the best management practice for holding excess water, but they can be costly. The rain garden built behind City Hall cost $5,600, while the estimated cost to install an an in-ground vault was $27,600. According to the 2016 Comprehensive Plan for Capital Facilities and Utilities (4), the city favors low-impact development approaches for stormwater management to conventional storm drainage designs when feasible.

“The design matches the site,” said Jason Porter, a utilities engineer with the city. “In the future, we’re looking to use both low-impact development and conventional stormwater management techniques where they are best suited.”

Still, the city has yet to address the less-than-adequate sewer systems in older Bellingham neighborhoods. As rainfall increases, Bellingham sewage capacities are due to remain stagnant. According to the 2009 Comprehensive Sewer Plan, 14 percent of Bellingham’s urban growth area (5) (spanning Lake Padden to the Bellingham airport) was “unsewered.” Although the city has retrofitted existing sewage lines and replaced water mains, no additional sewage lines have been constructed in older Bellingham neighborhoods. Out of 26,000 properties served by the Bellingham sewer system, about 300 properties are not yet served. Older sewer systems often have no storm drains at all, so stormwater collected in paved areas drains directly into the nearest water source.

“There are either geographic, technical or cost reasons why the sewer has not been extended to a property that has been developed for a period of time,” said Eric Johnston, operations assistant director for the Public Works Department. “If you are at the top of a hill and you’re a couple of thousand feet from the road, it just doesn’t make sense to spend $50,000 or $60,000  to connect one house to the city sewer. Is there a long-term goal to connect everyone to the city sewer? Yes, but we’re not pursuing an aggressive policy to force people to connect.”

The Washington State Department of Ecology has issued Bellingham a Phase II Western Washington municipal stormwater permit. These permits dictate what stormwater programs cities are required to establish. Currently, there are two types of permits based on a city’s population: Phase I for larger cities and Phase II for smaller ones. A Phase II permit means Bellingham is not required to have a structural stormwater control program or a source control program for existing development, said permit writer Abbey Rockwell.
A control program requires cities to retrofit older stormwater controls or implement a plan to handle surface contaminates such as street sweepings. Source control requires cities to inspect a percentage — typically around 20 percent — of local businesses each year to make sure they are properly controlling stormwater runoff.

Yet, the city has made recent efforts to reduce the amount of stormwater entering local waters. One project in 2014 provided residents with free rain collection barrels; 166 homes participated in that project, and 330 collection barrels were installed. Bloedel Donovan Park on Lake Whatcom’s north shore has been equipped with pervious surfaces that allow water to slowly seep through pavement and concrete instead of running into the lake.

Old water mains nearing the end of their life cycle have been replaced on West Holly Street and E Street. The Flycatcher Museum installed a vegetated, or green, roof that absorbs stormwater and reduces waterspout overflows by 40 percent to 65 percent, according to a joint study (6) by the city and Sustainable Connections.

New projects have also been aimed at improving the water quality in Lake Whatcom, from where Bellingham residents get their drinking water. Construction began in November on a new facility at Whatcom Falls Park that will help the water treatment plant by removing suspended sediments like algae from the water before it enters the filtration system. Algae and other solids frequently block the treatment plant.

Surface levels of algae in the lake have significantly increased over the past 15 years, doubling in some areas, according to a monitoring project (6) conducted in 2011 by Western Washington University. The U.S. Environmental Protection Agency lists rising water temperatures (7) as a potential cause for the increase in algae blooms, but nitrates and phosphorus contained in fertilizers also run into the lake via stormwater drains and spur algae growth.

The new system will use dissolved air flotation, a process in which small air bubbles are pumped into the water, causing solids to rise to the surface where they can be skimmed off. The filtered water is then sent to the sewer plant, where it is further treated.
“Right now, the treatment system is essentially a one-trick pony,” said Anthony, the project engineer. “So you’ve got one line of defense, and you throw everything that comes off the lake at that, and it can handle it all. But in the summer, when you have increased suspended sediment, it doesn’t work very efficiently.”

Anthony said that at one point during a peak in suspended sediment, the current filter was able to run for only five hours before initiating a backflow process in which water being transported to the filter is sent back into the lake, which can contaminate drinking water.
“By taking the suspended sediment out, the main filters can work much more efficiently,” Anthony said. “We’ve increased the overall capacity of the plant by virtue of making it more efficient versus making it bigger.”

The project will cost $11.4 million and will be funded by a state loan to the city, which will be repaid through water utility payments by residents. The city considered alternative treatment methods but decided the dissolved air flotation process was the most effective. This approach looks not only at the cost of the system but also at future energy costs to run the plant and any additional staff that would be needed to operate it.

“We might pay a little premium on the front end” when constructing the new plant, “but when looking at all the social and environmental impacts, you might not go with the cheapest technology,” Anthony said.

Robert Johnson is managing editor at The Western Front at Western Washington University. A writer and editor interested in environmental policy and local government, he is working with the Whatcom Watch as an intern.