News Update: As of 2/27/18, the Whatcom County Council voted 7 – 0 to remove from the 2018 Planning Commission Docket the DNR suggested amendment to the Commercial Forestry zone. That suggested amendment would have permitted ORV trails on DNR lands. DNR’s planning process for non-motorized recreation on DNR managed lands continues. 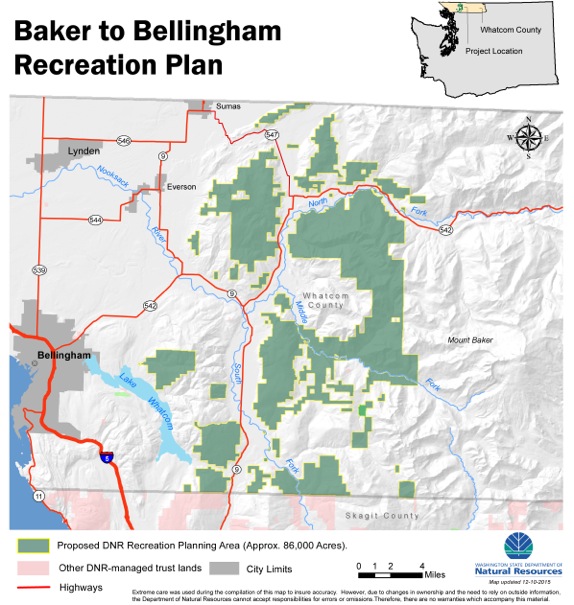 Imagine walking in the forest enjoying the solitude of tall trees, foraging for mushrooms, riding a mountain bike or horse, all while listening to the whispering wind, when suddenly the sound of off-road vehicles (ORVs) breaks the silence.

This is a possible future if a proposal by the Washington Department of Natural Resources (DNR) to open all of its lands in Whatcom County to ORVs motorized traffic comes into effect. That means dirt bikes, dual sport motorcycles, three-wheelers, ATVs and quads and other 4-wheel drive vehicles such as pickup trucks could compete with hikers and other quiet users for access to these areas.

The Proposed Amendment will be considered by the County Council in either late February or sometime in March 2018. Council members will decide whether to include the Proposed Amendment in the 2018 docket for the county Planning Commission. If included, the Ccommission will conduct a review and make recommendations, after which the proposed amendment would come back to the Ccounty Ccouncil for a final decision.

This isn’t the first time this has been proposed. The County Council in 1987 voted against the ORV proposal for Sumas Mountain. That Council decision came after a long and contentious fight against an ORV proposal sponsored by DNR and the Whatcom County Parks System.

DNR lands in Whatcom County are located primarily in the foothills of the North Cascades and comprise a checkerboard swath of the county from the Canadian border to Skagit County and east-west from Deming to Glacier.

A critical issue for the Ccouncil’s consideration is that DNR lands are zoned Commercial Forestry, and under current county zoning codes, any sort of “ORV park,” which currently encompasses all types of ORV uses and trails, is prohibited in Commercial Forestry zoned areas.

However, the language of the Proposed Amendment is wide open and if it is approved, would allow DNR, subject to compliance with zoning permit application process and SEPA review, to build Motorized Trail Systems on any DNR property in Whatcom County, whether in the North Fork, Middle Fork or South Fork areas, as well as DNR lands north of the Mt. Baker Highway.

There are many non-motorized recreation users who would love to use DNR managed lands for such activities as soaring, foraging, mountain biking, hiking, hunting, horseback riding, trail running and cross-country skiing. All of those existing and popular uses qualify for the statutory “multi-use” mandate for DNR managed lands.

There does not appear, however, to be a mandate that such multi-use must include motorized uses, which actually conflict with non-motorized uses, such as hiking and horseback riding to name a few. DNR’s own surveys, as well as the committee member comments, confirm that the public recognizes that such conflicts do exist with motorized uses. Including motorized uses in the DNR managed lands in Whatcom County will effectively shut out hikers, horseback riders and other quiet users.

Lands Currently being Considered for Motorized Trail Systems
DNR is now focusing its planning for motorized trail systems on Concept Map D and Concept Map E for Whatcom County DNR lands. Concept Maps D and E are being reviewed by DNR with its 17-member Advisory Committee, consisting of representatives of many recreation groups as well as tourism. 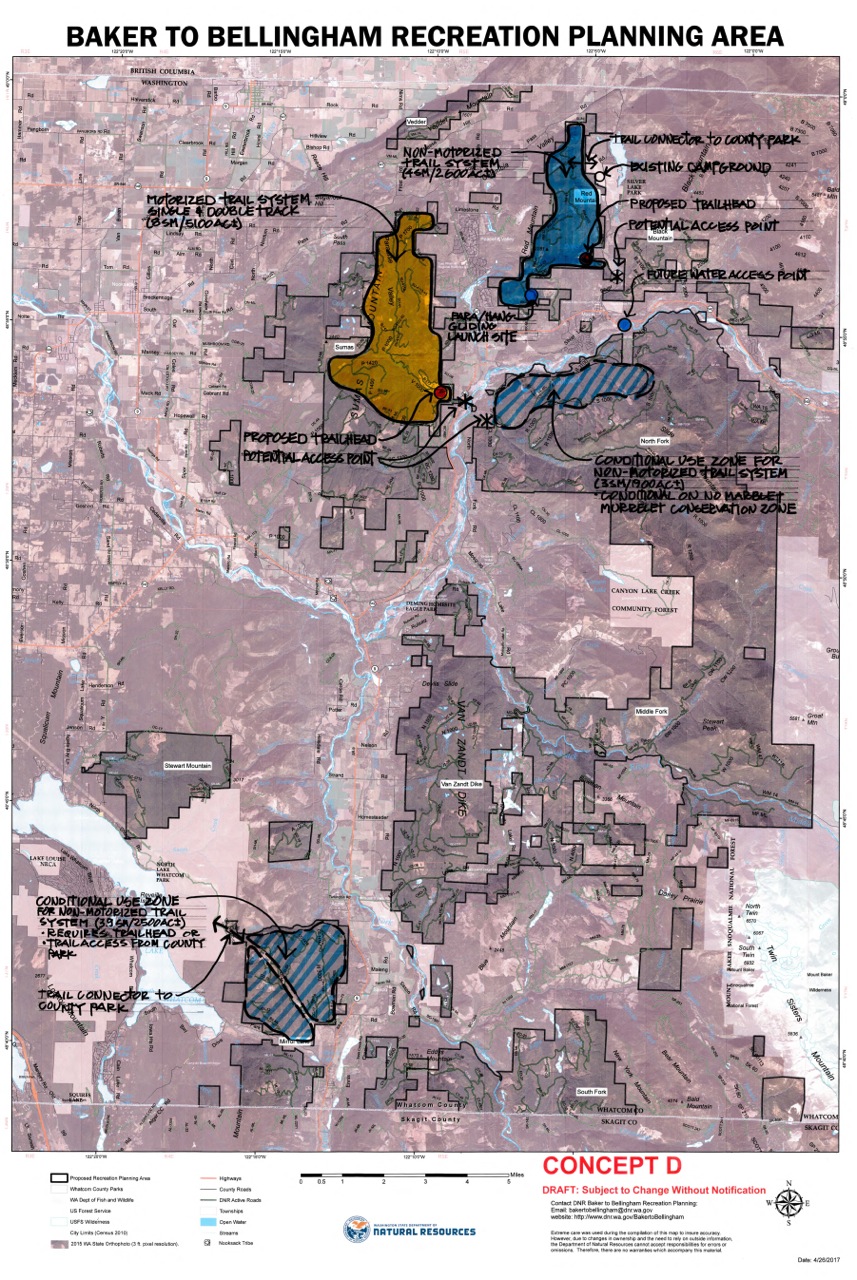 The primary focus of the Concept Map D map is Sumas Mountain, it would be the only location of motorized use proposed. Sumas Mountain, if chosen, would have 5,100 acres for motorized use. Key: 1. Motorized, single track and double track, on Sumas Mtn. 2. Nonmotorized on Red Mtn, paragliding launch site on south end of Red Mtn, and connector trail from Red Mn to Silver Lake Park. 3. Conditional use, nonmotorized zone for North Fork river front (conditional on no need for protecting Marbled Murrelets at that site). 4. Conditional use, nonmotorized zone for DNR land immediately north of Mirror Lake (conditional on trail access from North Lake Whatcom County Park). 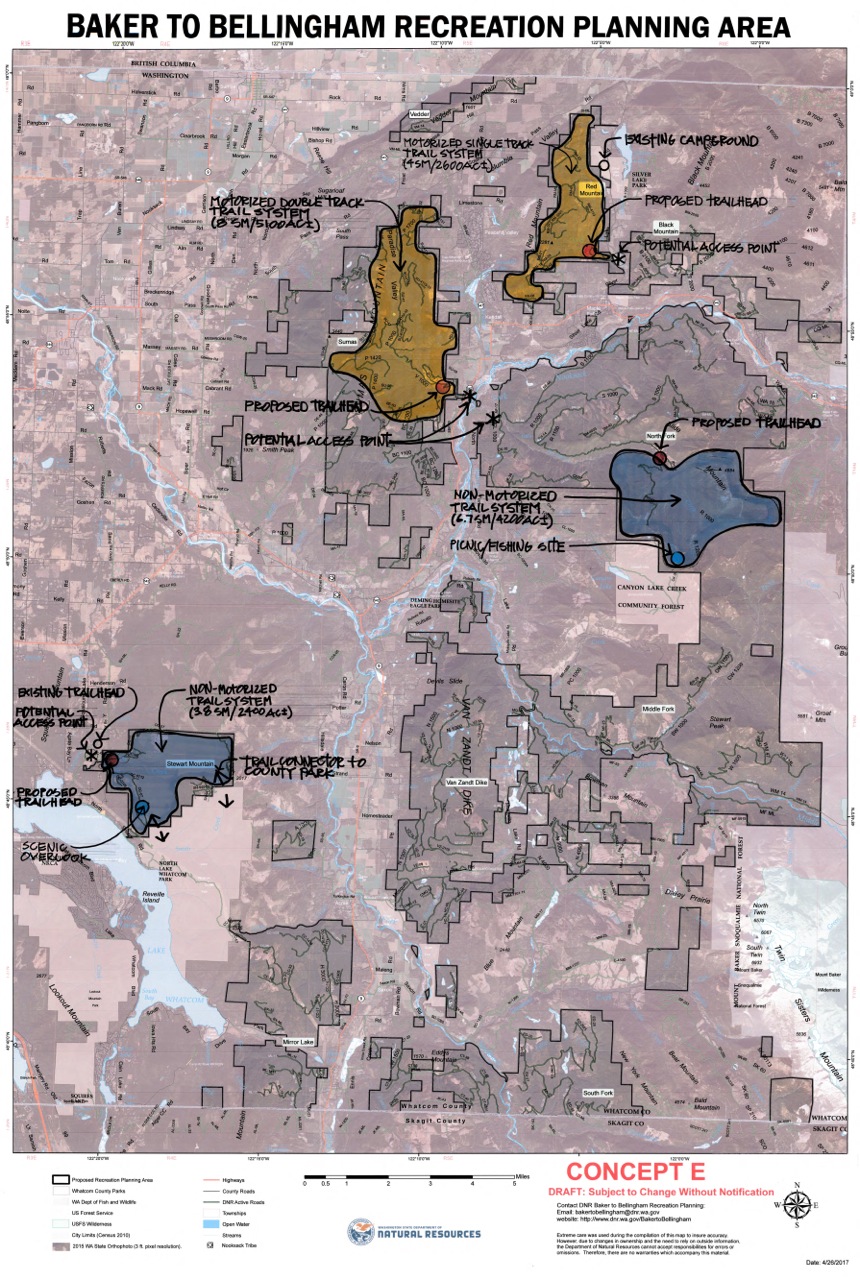 The maps clearly show that DNR considers those mountains as sites sites for motorized trails, both single track and double track, as shown by the notations on the maps. These motorized trails will be built by DNR with grant money still to be obtained. These will be unlike forestry roads or illegal existing trails, and the proposed new ORV trails will be professionally built to DNR’s specifications, effectively a commercial ORV trail system in the forest.

Environmental Concerns with Motorized Trail Systems
Motorized Trail Systems and their use by ORVs will cause environmental impacts. At a minimum there will be noise, disturbance of wildlife and their habitats, soil disturbance and erosion, and disturbance of streams and washing of disturbed soil into the streams. There are eagles, hawks, bear and cougar and deer on Red Mountain and Sumas Mountain, as well as many other species, which could be endangered by ORV noise and invasion of their habitats.

DNR has made two presentations about ongoing management issues and planning regarding the Marbled Murrelet, an endangered species that has nesting areas on Red Mountain, and a proposed management area on Sumas Mountain as well as nesting sites on other DNR lands. The Murrelet materials are on the DNR website for the meetings held June 14, 2016, and January 10, 2017.

These two maps show information that raises concerns with using the DNR lands for ORV trails. That information includes identification of locations of steep slopes, creeks, wetlands and wetland buffers, talus, caves, cliffs, bald eagles, riparian areas, open water, elk, high quality and rare plant communities, soils risk, poorly drained soils, alluvial fans and past land slide. DNR has indicated that it would take into consideration all of this information in making its decisions as to whether and where it would like to suggest ORV trails.

Similar ORV proposals in the past indicate other environmental issues that need to be addressed. In the late 1980s, several groups (including the Whatcom County Farm Bureau) weighed in on landslide issues as well as disturbance of salmon-bearing streams that likely would arise from potentially permitting ORV use on Sumas Mountain. Those groups concluded that the proposed Sumas Mountain plan should not be approved. The Whatcom Farm Bureau stated in 1987: “this proposal victimizes the people who live in the Sumas Mountain foothills.”

Community Services and Infrastructure Issues
A review of this Proposed Amendment should also consider the general welfare, safety, health and well-being of the entire community as a whole.

The fire and EMT departments in the other East County communities that border DNR lands may be impacted by the increased activity of the proposed DNR ORV trails. More people coming into the areas increase the likelihood of the occurrence of service incidents.

This is a dangerous sport, and injuries do occur.

The increased ORV activity under the Proposed Amendment would most likely increase demand on EMTs due to accidents such as the one reported in The Bellingham Herald on Jan. 16, 2018, where a teenager was badly injured and had to be rescued from Sumas Mountain by the local EMS and SAR from several service districts. It takes time to find an injured ORV rider, and specially trained folks and equipment to extract the injured person and to get them to needed medical care.

Any such demand on services could decrease, for the duration of that response, usual services to local residents that are already stretched. For example, medical emergencies that are handled now by the Kendall EMS are frequently transported to Bellingham by a shuttle of two vehicles: first, by a Kendall EMS vehicle meeting a Bellingham ambulance halfway to the hospital, and second, by transferring the patient to the Bellingham ambulance. Then, the Kendall EMS vehicle returns to Kendall, thus limiting the time that the entire Foothills area is without the presence of an EMS vehicle.

There will also be increased risks of grass fires from ORV use, such as a local wildfire of several acres just east of Kendall caused by dirt bikes in the summer of 2017, as noted by the DNR and the Kendall Fire Dept. Such fire risks will likely increase the demand on local fire departments, again leaving local residents facing possible greater risk.

And there could will be situations requiring the assistance of law enforcement that will go unaided by DNR given their lack of local personnel. DNR’s nearest office is in Sedro-Woolley, and there is only one enforcement officer for all of Whatcom County together with Skagit County.

Neighbors and abutters are concerned about how the DNR ORV rules will be enforced, who will keep the peace, and who will maintain the infrastructure at ORV parking lots and trailheads on DNR land.

There is a history in the Foothills of trespass and other violations of DNR’s lands by ORV users. Anecdotally, many residents who live on land directly abutting DNR’s Sumas Mountain lands have experienced these violations. They have gone on record in public meetings with these issues. In that event, the enforcement falls on the county sheriff’s office, which has only one officer available for the entire East County including South Fork Valley. There is concern that more ORV activity will bring more problems of the nature experienced by neighbors for many years. More activity requiring law enforcement means other reportable activity affecting local residents could go unaddressed.

These likely increased risks, should the Proposed Amendment be adopted, could impact local services’ ability to serve communities that border or are near DNR lands. The cost of local services involving DNR lands will fall on the shoulders of local taxpayers and local community and county services.
.
The Whatcom County Comprehensive Parks, Recreation and Open Space Plan of 2016 states that regarding “facility priorities” for local residents, “motorized trail facilities scored ‘very low’ ranking of all activities, with a scoring of 9 percent” (see page 45). The development plan priorities also scored such proposals “very low,” scoring only 11 percent.

If only 11 percent of County residents support motorized trails, DNR and the County Council should not ignore the desires of the majority of Whatcom County residents, voters and taxpayers who would have to live with the consequences of such a proposal.

The current Proposed Amendment is shaping up to be another fight where local residents, neighbors and abutters will resist having such mechanized trail systems that bring the noise, ground disturbance, damage to local streams that feed into the Nooksack River, and disturbance of wildlife habitat and corridors that would be caused by all manner of ORVs. In addition, ORV use in DNR forests will turn away many other recreation users either due to incompatibility or dislike of encountering noisy vehicles in the quiet of our woods and hills and mountains.

The current zoning was put in place to protect the well-being of all Whatcom County residents, the integrity of our water quality and the continued productivity of our Commercial Forest lands. DNR may want to bring back the zoning amendment proposal for 2019, so we need to remain vigilant to protect Whatcom County Zoning.

Information on Meetings and County Contacts
Please note that the DNR Advisory Committee meetings are held on the 2nd Tuesday of the month, and the next meeting is March 13. The DNR website (https://www.dnr.wa.gov/BakertoBellingham) will have information on place of the meeting and time. The website also has information on Concept Maps D and E.  If you want to make your concerns known about this proposal, contact the Whatcom County Planning and Development Services at: 360-778-5900 and the County Council at 360-778-5010.
_____________________________
Amy Mower is a retired attorney. She served on the Foothills Subarea Plan Advisory Committee from 2006 – 2010, and the Maple Falls Water Cooperative Board of Trustees from 2004 – 2007.