An Interview with Tom Chance, manager of the Lummi Nation Salmon Enhancement Program 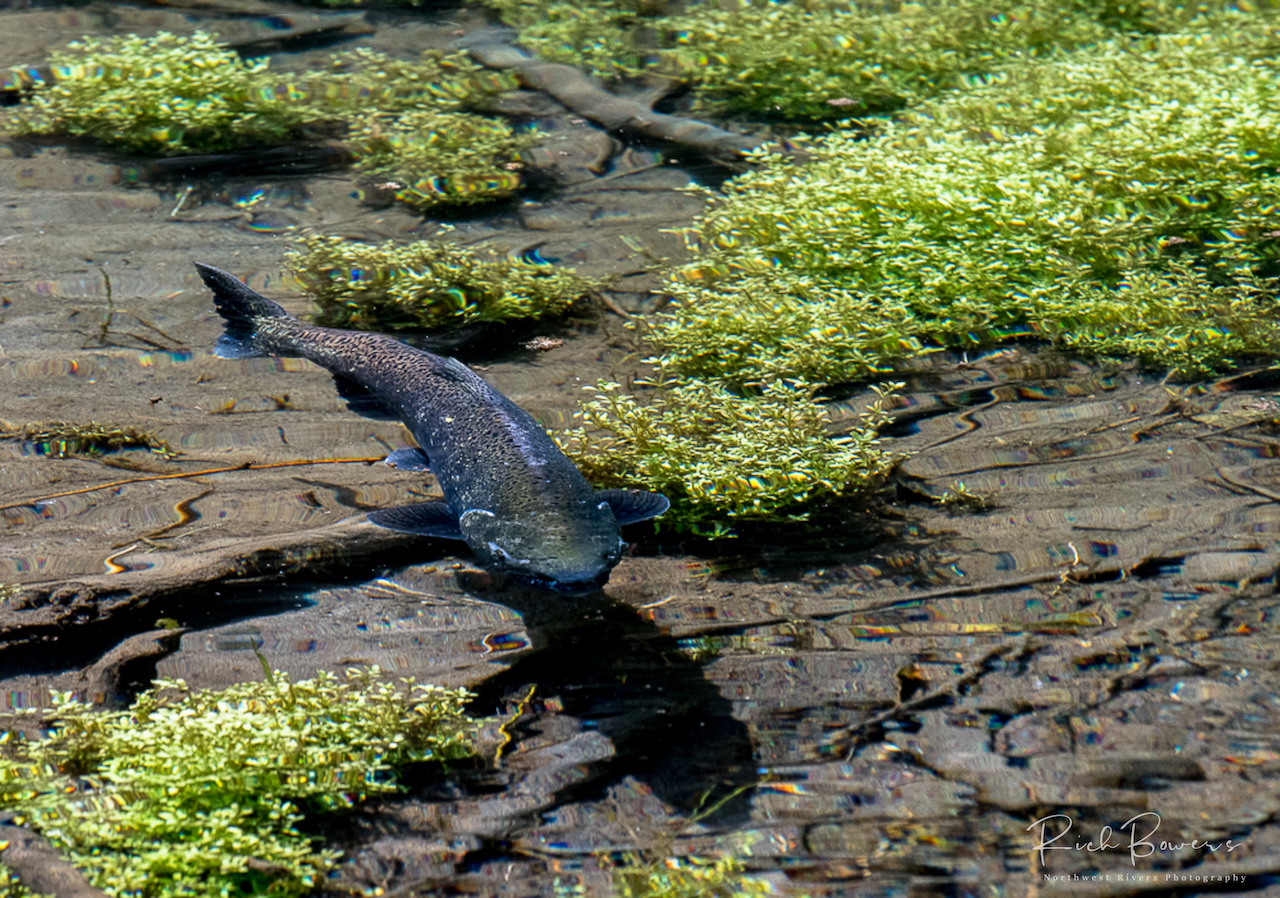 In September, the Whatcom Land Trust received a call from the Lummi Nation’s Salmon Enhancement Program Manager, Tom Chance. He called to share that Lummi Nation was preparing a last-ditch effort to rescue South Fork Chinook trapped below the Skookum Hatchery. A combination of low river flow, high water temperatures and limited habitat created a perilous situation, leaving hundreds of Chinook without access to their ancestral spawning grounds. Tom’s team planned to access the South Fork via Land Trust properties and capture stranded Chinook for transfer to the hatchery.

This operation would avoid a repeat of the South Fork Chinook die-off event that resulted from similar extreme heat and low flow conditions last September. A shifting climate and unstable hydrological conditions have resulted in alarming river conditions throughout the year — a combination of low water quantity in summer, and heavy flooding in winter, putting the Lummi Nation’s Captive Brood program and South Fork Chinook at significant risk.

Captive Brood Program
Established in 2006, the Lummi Nation Captive Brood Program was established after a study revealed that only 15 to 20 wild South Fork Chinook were returning to spawning grounds — making them the most critically threatened salmon stock in the continental United States. The Lummi Nation has since taken considerable measures to prevent the extinction of South Fork Chinook stocks, in partnership with the Nooksack Indian Tribe. Instead of releasing juveniles into the river in hopes that they come back as adults, they are reared at the Skookum Hatchery before release into Lummi Bay.

“Fifty percent of the females from the program don’t come back to the hatchery,” said Tom. “They stay in the river. That’s good news, because they’re producing lots of wild offspring.”

The Captive Brood Program has “quadrupled genetic diversity [of the South Fork Chinook] stock, which is almost unheard of. The goal is to maintain the program as the buffer against extinction,” he added.

However, the success of the program is threatened by record high water temperatures and extremely low river flow. Tom reports, “There’s pretty much a consensus here. It’s getting more extreme. We had an all-time record flood last year in November, but only three months earlier, it was preceded by a 100-cubic feet/second extremely low flow. It’s like clockwork, you know, drought conditions and then by middle of November — boom — a huge rain event and [Chinook habitat] gets blasted out in a lot of cases.”

Recalling September 2021, Tom said, “We had these horrible conditions, and we got hit with hundreds of pre-spawn mortalities.” Pre-spawn mortalities occur when Chinook enter the South Fork, but die before they are able to reproduce. In this case, fish were trapped in low, hot water just below the hatchery.

Another Die-Off Event?
Tom is worried that, if the South Fork doesn’t receive rain soon to increase flow and lower water temperatures, another die-off event is possible this fall. This is “a concerning situation for a high priority recovery program.” Consecutive back-to-back years of poor conditions “could spell demise for the program” if the hatchery is unable to collect enough fish to spawn and rear a genetically diverse population.

The Lummi Nation is also working to address the fork below the hatchery, where fish are currently stuck due to low flow. But, according to Tom, habitat restoration permitting processes in Washington state are complicated and costly, requiring a large percentage of awarded funds to go toward navigating permitting, rather than the actual cost of restoration. “Considering restoration grants are already limited and competitive, improvements to this process are necessary to increase restoration capacity on the South Fork.”

“We’re pushing to get a habitat restoration project done in 2024 so fish can actually go past that barrier,” adds Tom. “We want fish to come into the hatchery and we also want them to be able to get up higher, much, much higher into the South Fork so they can seek out cooler water. Otherwise, we’re going to be in this [die-off] situation every year.”

The Land Trust’s Role
The South Fork needs to be stewarded with proper river function in mind. “And that’s where Whatcom Land Trust acquisition [along the South Fork] is important,” explained Tom. The Whatcom Land Trust works with partners to perform vital habitat restoration, “allowing channels to form and increasing connectedness, which is really important for spawners and increasing habitat” for salmon to avoid low flow and high heat conditions.

Currently, the Whatcom Land Trust is working with the Lummi Nation to design and implement in-stream restoration at Skookum Creek Reach.

In addition to acquisitions, Tom points out the need for a more streamlined habitat restoration permitting process in Washington. The permitting process is complicated and costly, drawing a large percentage of grant funds that are already limited and competitive. Improvements to this process are necessary to increase restoration capacity on the South Fork.

November Update
This article was originally published in September, 2022 in the land trust’s newsletter. The Whatcom Land Trust checked in with Tom Chance during the first week of November to get an update.

According to Tom, they planned to capture and transport Chinook to the hatchery at two different times, but called it off due to concerns of high mortality during transportation. Fortunately, a catastrophic die-off didn’t occur, but they still saw extraordinarily high pre-spawn mortalities. Tom said he “can’t explain what transpired, and what ultimately led to lower die-off because the conditions were just as bad, if not worse” this year.

“I think we ended up with about 2,200-2,300 Chinook back to Skookum — that’s really good. We spawned 404 pairs, and took 1.6 million eggs, which is about three times more than I was anticipating. Enough to ensure that the program is secured, and continues making good progress,” said Tom. “On a preliminary basis, this still has to be vetted; we might have even seen a record number of natural origin South Fork Chinook. That would be a historic event, going from seven natural-origin South Fork Chinook to many hundreds this year.”

With the program secured after another summer season, Tom is preparing for winter floods.

“There’s such a thing as too much water for fish. Because of low flow in the summer, fish can’t access side channels and are forced to spawn in the deepest part of the river, where the highest amount of energy/water is,” said Tom. “All the eggs buried in the gravel are subject to the highest energy and greatest depth of water” during a flood. We can see a couple feet of the riverbed being scoured out and pushed downstream, and with it goes all those eggs. Once that happens, we’ve lost all those eggs” that were successfully spawned this summer.

Tom points to the importance of letting the river’s floodplain spread out. “It wants to turn into a braided, complex piece of habitat, where there are side channels, there’s refuge where fish can spawn to get out and away from the main river channel,” said Tom.

As we wrapped up our conversation, Tom emphasized that South Fork salmon are “facing an uphill battle.” Community partners, whether they are organizations like Whatcom Land Trust, neighbors or those working in the greater salmon recovery community, must look toward a collaborative and interdependent future as stewards of Washington lands and waterways.

The Whatcom Land Trust is honored to continue their support of the Lummi Nation and the Nooksack Indian Tribe in their ongoing efforts to save the South Fork Chinook.