Plasmodial Slime Molds Are Not Molds

What’s in a name?
That which we call a [slime mold]
By any other name would [look] as sweet.

Of all the cryptogams (plant-like life forms that produce spores), perhaps the slime molds are the least well known. Like the mushrooms, they often pop up suddenly, unannounced over the course of a day or two. These common organisms are not molds, nor are they any other sort of true fungus. Largely because they frequent the habitats of mushrooms, scientists who study fungi (mycologists) have often taken an interest in slime molds. But, many types of scientists have studied them as well, and this has led to great confusion as to what to call them. To make matters even more confusing, there are at least three other, unrelated groups studied by mycologists which have part of their name, “slime mold.”

In this article, I am going to restrict the focus on the slime molds most likely to be encountered in Whatcom County, the plasmodial slime molds. As far as I know, they have no economic importance to human beings (other than occasional use as laboratory subjects): The real reason that those who study them find them interesting is that they are wonderfully diverse and weird.

So where does one find a plasmodial slime mold and what do they look like? The most common location around here is in our dank woods on rotten logs, but you might see them anywhere. The slime stage is somewhat like the body of a fungus, but not really. More on this later. When mature, slime molds produce spores. It is the spore-producing stage that is recognized and identified. These spore-producing structures vary in size and shape (Figure 1). One common species, Fuligo septica, will appear as an ugly, crusty, dirty pinkish cushion up to a quarter of a meter across on bark mulch or bare soil. Another, Lycogala epidendrum, looks like little pink puff balls on very rotten wood that eventually turn a steely gray brown; these are rarely over 1 centimeter in size. Many others appear as tiny powdery balls or cylinders, like Hemitrichia sp. which are usually only a millimeter or two in diameter.

Mycologists like myself have called them the Myxomycetes (= “slime fungi”). Because they also have some characteristics shared by animals, zoologists felt they were better placed in a protozoan group, the Mycetozoa (= “fungus animals”). The currently accepted name, the Myxogastria (= “slime stomachs”), reflects our knowledge that they are neither animals nor fungi. Rather, they are one of a great many groups of protists, a huge collection of relatively simple organisms with complex cells (eukaryotes, whose cells have nuclei and other internal structures lacking in bacterial cells). Protists tend to be composed of single cells, but some, like seaweeds, are more complex and are made of many, similar cells. There is more genetic diversity among all the protists than in the whole of the plant, animal and fungal kingdoms. So much diversity that, if all the eukaryotes were divided into kingdoms, there would be about eight and one of them would include all the fungi and all the animals, and a few protists, including the Myxogastria (in this system, the plants are in their own kingdom)!

Life History
To fully understand the roles of plasmodial slime molds, one needs to study their life history. Start with a spore which has found itself in a convenient habitat conducive to further growth. The spore germinates and out “crawls” a small Amoeba-like cell. Amoebas are microscopic, single-celled protists that mostly live in water and ooze around like little flexible balloons eating bacteria and other small bits of organic matter. Slime mold amoebas similarly ooze around in moist habitats inside rotten wood, dead vegetation and soil consuming similar food. We rarely see them at this and the following stages since they are buried in their habitat. Early on, for many species which have been studied, the amoebae fuse in pairs to form slightly larger cells (which are diploid like the zygote cell formed from union of sperm with egg). These cells can divide and increase in numbers and continue to live as single cells.

At some point, as they eat and grow, an interesting thing happens: a fusion cell gets larger and larger but it doesn’t divide. Eventually it grows to the size one could actually see (if they were out where we could see them). To continue to control cell function and growth, the nuclei divide and increase in number to the thousands. However, the cell does not divide around the new nuclei. This makes the resulting multinucleate structure very different from most other multinucleate organisms (like you or me or the tree outside your window) which are also composed of many cells. When this large, this multinucleate cell is too big to actually exist as a single “balloon.” It turns into an openly interconnected, multinucleate network of slime tubes, a plasmodium (Figure 2). In some ways, a plasmodium is like the network body (mycelium) of a true fungus, but, unlike mycelia which release enzymes and absorb food broken down by them, plasmodia actually ingest food and digest it within themselves. 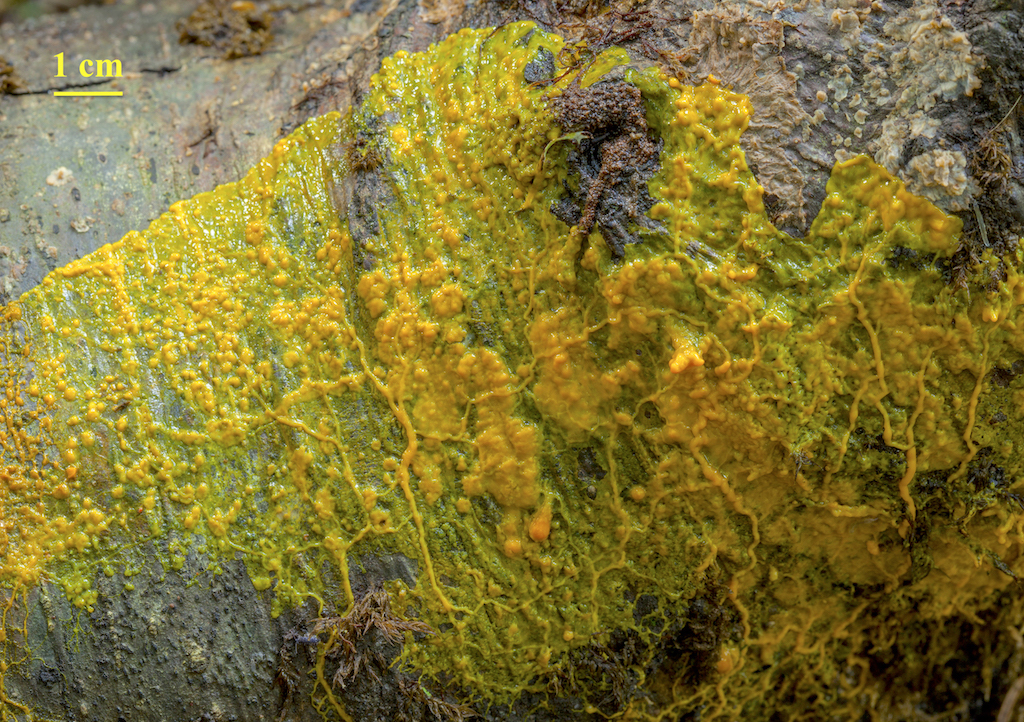 Figure 2. A large plasmodium on the surface of an alder log. It has emerged after feeding inside the log and is about to form spores.
Photo: Fred Rhoades

This plasmodium continues to engulf and consume its food and gets bigger and bigger. Plasmodia can be cultured, and, when examined closely with a microscope, their internal substance (cytoplasm) can be seen to flow back and forth within the tubes, reversing direction every half minute or so. By uneven flow, ultimately the plasmodium works its way to new food this way. Nuclei continue to divide, and, when they do so, they all divide at exactly the same time! Normally, plasmodia remain hidden within their habitat. It is only at the time that they want to develop further into some kind of spore-producing structure, that we actually see them as is happening in Figure 2. The plasmodium at this stage is less interested in eating and more interested in finding a suitable spot on which to produce and release spores. 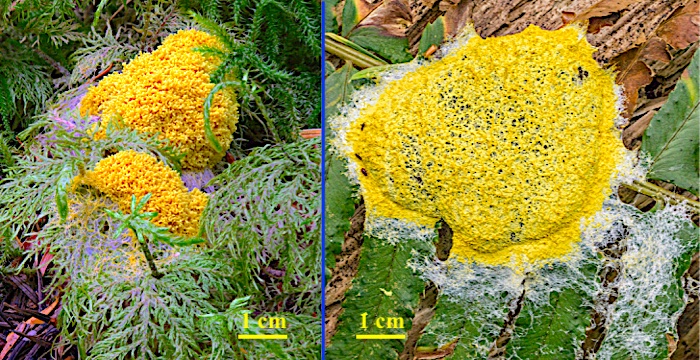 They can be seen crawling over mosses, ferns, blades of grass (Figure 7): they do nothing to these other than crawl over them, and, if one were to want to get rid of them for some reason, it would be easy to spray them with water to disintegrate then at this stage. One other weird aspect of their existence that can be mentioned at this point: if perchance, a plasmodium decides to come up out of its habitat and produce spores, but, if it suddenly turns hot and dry, they can dry up into a hardened mass. Later (weeks or months later in fact), if moistened by precipitation, the dried plasmodium will ooze back to life and continue to live — either returning to its hidden habitat or continuing on to form spores.

Species Found Here
A closer look at one common local species will help further your understanding of how these organisms work. Trichia botrytis is one of the local species that produces small, stalked spore sacks. Over a time of several days to a week, the plasmodium oozes up out of the wood in which it is feeding and firstly forms numerous balls of slime (Figure 3). 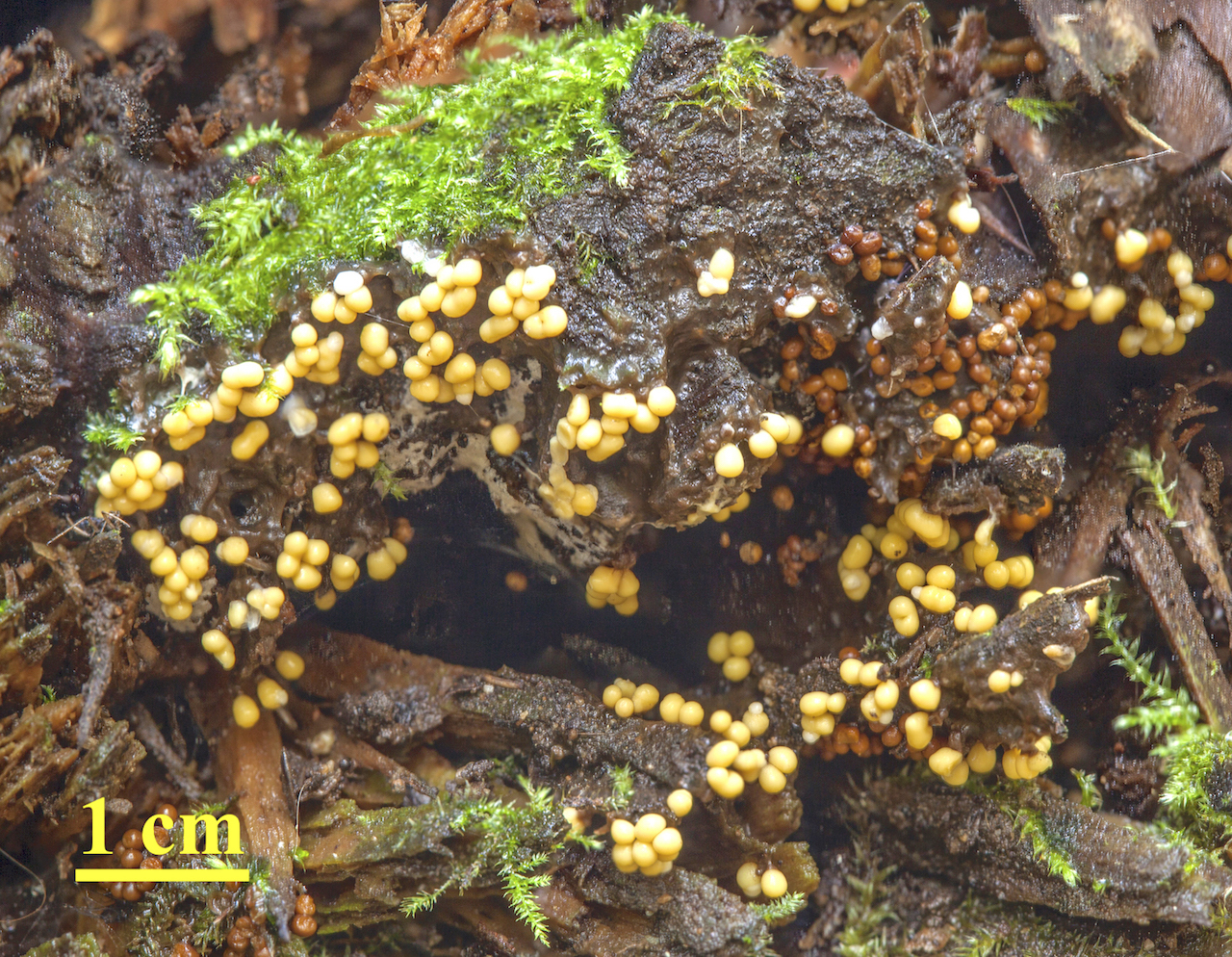 Figure 3. Trichia botrytis beginning to form sporangia on the side of a log.
Photo: Fred Rhoades

These build and simultaneously climb out on short stalks and then slowly dry up to form spore sacks (sporangia). Each sporangium has a covering, and, inside, some of the numerous remaining nuclei forms four spores (they undergo meiosis — look that up in Wikipedia if you don’t understand the process).

The spores and special hairs (capillitial hairs, also produced by the remaining cytoplasm) can be seen in both sides of Figure 4. 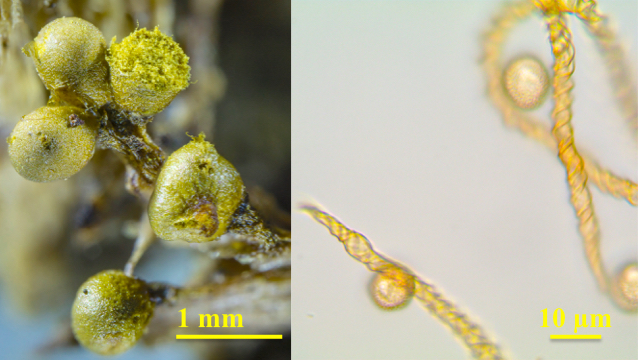 Note that the capillitial hairs are thickened with spiral bands. These thickenings will cause the hairs to twist and untwist as the humidity changes around them within the sporangia and thus loosen the spores so they can disperse one by one rather than as a clump.

One particularly common species of plasmodial slime mold, Ceratiomyxa fruticulosa, is often found here on the sides of logs a bit earlier in the year. It appears as a crust of minute white fingers. When they are fully mature, a close look at these fingers (a hand lens helps), will show that they are covered on the outside by thousands of stalked spores. This is a unique feature of only the plasmodial slime molds in this genus (inset, Figure 5). 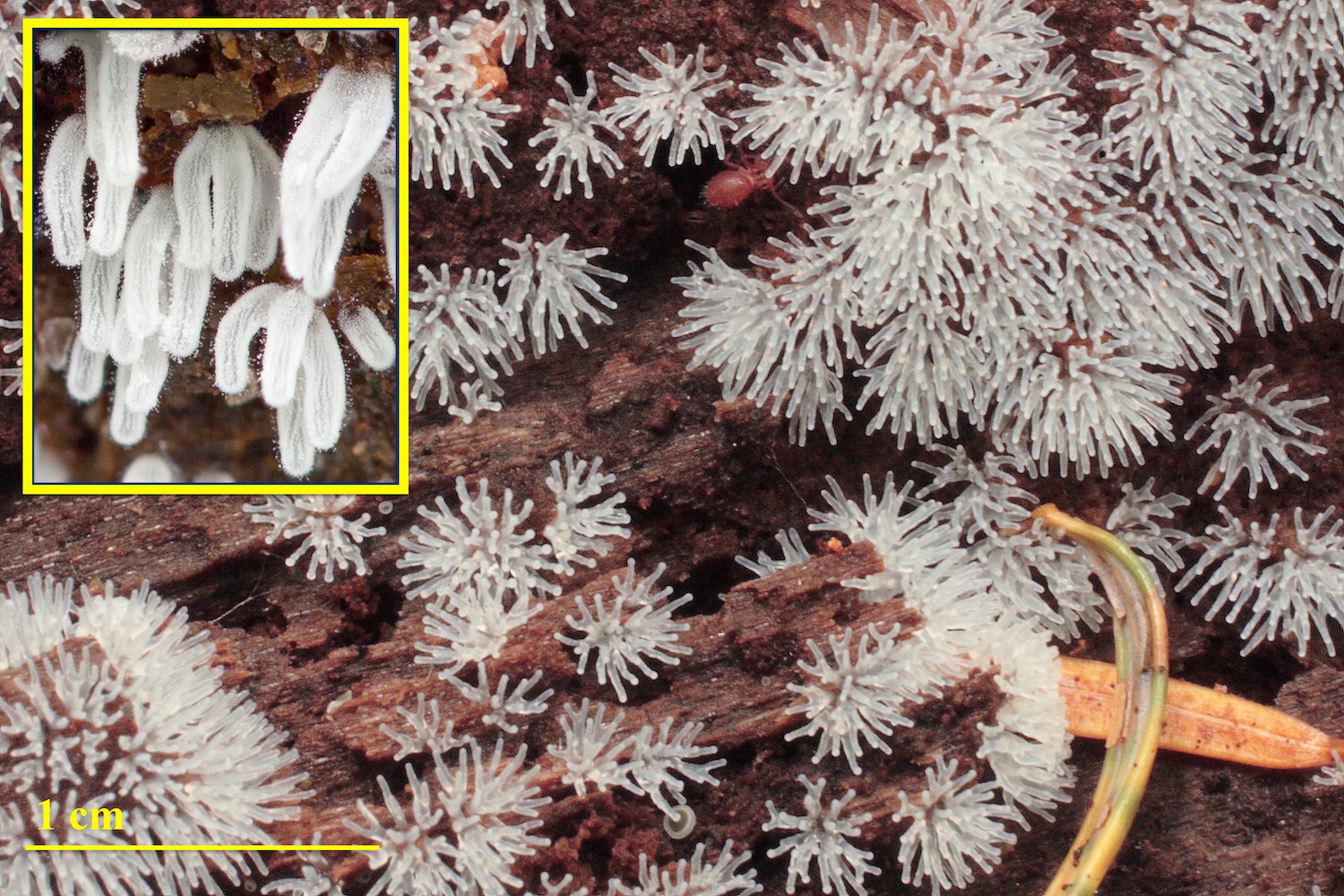 All other slime molds produce their spores inside some container. Two years ago, someone sent me a photo to identify a slime mold (similar to Figure 6) found in the Whatcom Land Trust Fenton Reserve property.

A little hunting in identification books led me to the surprise: this slime mold is considered to be the same species, Ceratiomyxa fruticulosa, although some treat it as a unique variety C. fruticulosa var. porioides. One wonders if some quirky expression of a single gene active during the maturation of the plasmodium doesn’t cause this inside-out version of the tiny fingers. In my 40 years of living in Whatcom County, I had never seen this form before. Since that initial sighting two years ago, at least five fruitings of the poroid form have been made in different areas in our county, including the one in Figure 6 which was just reported in May by a Western Washington University student. 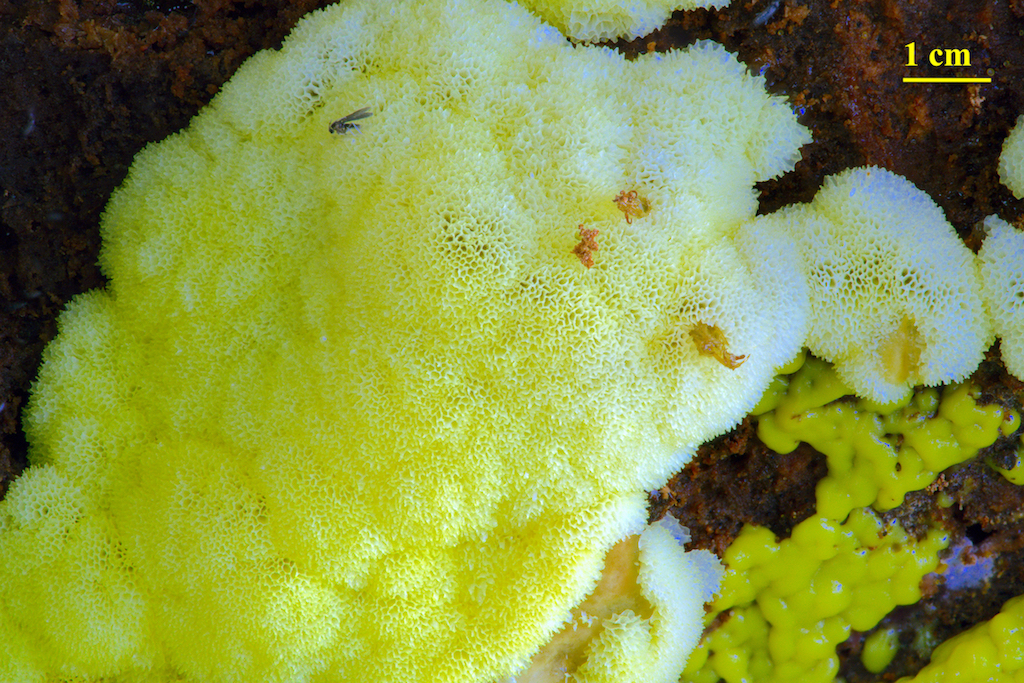 Another common species locally, that you may see throughout our Cascade Mountain forests this summer, particularly after rains, is another form of Fuligo septica. This species produces a foamy mass of purple-brown spores when mature. Color really shows the difference between the yard form and the woodland form that really isn’t apparent in black and white. When this species occurs in yards (Figure 1), the plasmodium is a pinkish brown and the spore stage is beige with the purple-brown spores peeking through. The common woodland form (Figure 7) has a bright orange-yellow plasmodium with a crusty yellow-spore stage producing the purple spores. When you see the different forms of these two genera, Ceratiomyxa and Fuligo, that are said to represent the same species in both cases, one wonders exactly how one determines the species of slime molds. We will leave that quandary to the expert Myxogastrian taxonomists.

As you can imagine, the sudden appearance of slime molds in a location where they were not seen the day before, can cause people to get excited (I do at least). In 1973, after a particularly wet, rainy period, there was a sudden occurrence of Fuligo septica masses (see Figure 1) over lawns in Dallas, Texas. The invasion of the “blobs” (as they came to be known) almost caused mass hysteria as residents called the police to come and deal with these supposed aliens. Eventually, after mycologists in the area explained the true nature of these organisms to everyone, the residents’ concerns calmed somewhat, and, eventually, the “invasion” ended when environmental conditions were no longer suitable. Sweet.