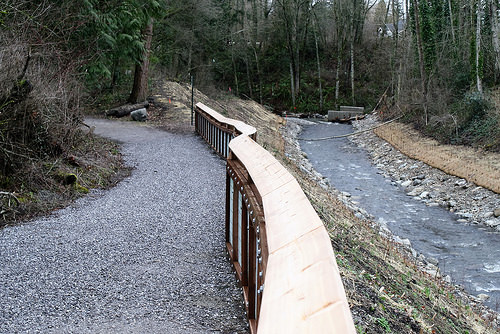 New walking and bike paths weave alongside and across the stream all the way from the lake source to the bay. Photo: Ron Kleinknecht

Editor’s note: This article was originally published Jan. 27, 2016, on the Daily Kos (www.dailykos. com). It has been edited slightly to include updated information.

After 120 years, a half-mile length of Padden Creek will once again see the light of day. In 1892, an eight-foot by four-foot brick tun­nel was built to redirect the creek in order to drain adjacent wetlands and thereby enable building of a Great Northern Railway train station. Now, following a 30-year joint effort by the City, local resi­dents, and the state Departments of Ecology and Transportation, migratory salmon can once again travel from Bellingham Bay to nearly the full two-and-a-half miles to the Creek’s source (Lake Padden) to spawn.

Two years ago, I wrote a series of diaries for the Daily Kos il­lustrating the habitat restoration of three salmon spawning creeks that run through Bellingham, Washington. Here I provide an update on the continuing progress on the Padden Creek project. Since I last reported on this creek, much progress has been made and I believe the largest and most important part of the project is now complete. (For information on the details of the project, you can read “Daylighting Padden Creek: Breathing Life into an Urban Stream,” by Wendy Scher­rer, published in the Sept. 2015 Whatcom Watch.) 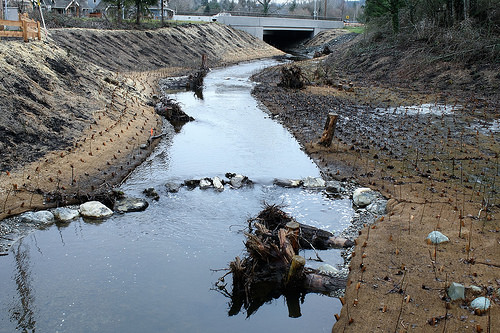 The daylighted streambed and riparian corridor – after 120 years in a tunnel. Stumps and rocks added to slow stream flow and create spawning areas. Photo: Ron Kleinknecht

A new streambed was con­structed to replace the tunnel along with a state of-the-art ripar­ian corridor. The streambed was shaped to accommodate flood-level water flows and the creek borders were planted with a vari­ety of native vegetation including Mahonia (Oregon grape), vine maple, and sword ferns, among others. As these plantings ma­ture, they will provide overhang and shading, thereby cooling the stream to accommodate salmon.

New walking and bike paths weave alongside and across the stream all the way from the lake source to the bay.

Much of the creek runs through urban areas with its accompany­ing residential and commercial runoff that eventually finds its way to the creek. Where feasible, they have structured runoff catch basins which are graded, planted, and directed to the creek.

Various portions of the creek remain in its “almost” natural state although some still re­tain from earlier mitigation with culverts to accommodate walking paths and fish ladders to accom­modate traveling salmon looking for a cool place to spawn.

The banks of the creek’s estu­ary have also been reconstructed to allow more natural vegetation and more hospitable environ­ment for the young fry and smolt to linger and grow before embarking on their cross-ocean journey.

After so many years of being partially buried out of sight and out of mind, the whole of Padden Creek is now out in the daylight. The creek’s resurrection is a ma­jor win for all involved. For hu­mans and their pets this former abomination is now a pleasant series of trails winding along the creek, the highway, and through a lush canopy of conifers, maples, and other native vegetation. For the salmon there is an inviting naturalistic streambed flanked by native vegetation that should be spawningly inviting. And it is all quite literally in many people’s backyards.

Ron Kleinknecht is professor emeri­tus of psychology and dean emeritus of Western Washington University’s College of Humanities and Social Sciences. He is a life-long sport fish­erman and a nature and conserva­tion enthusiast.