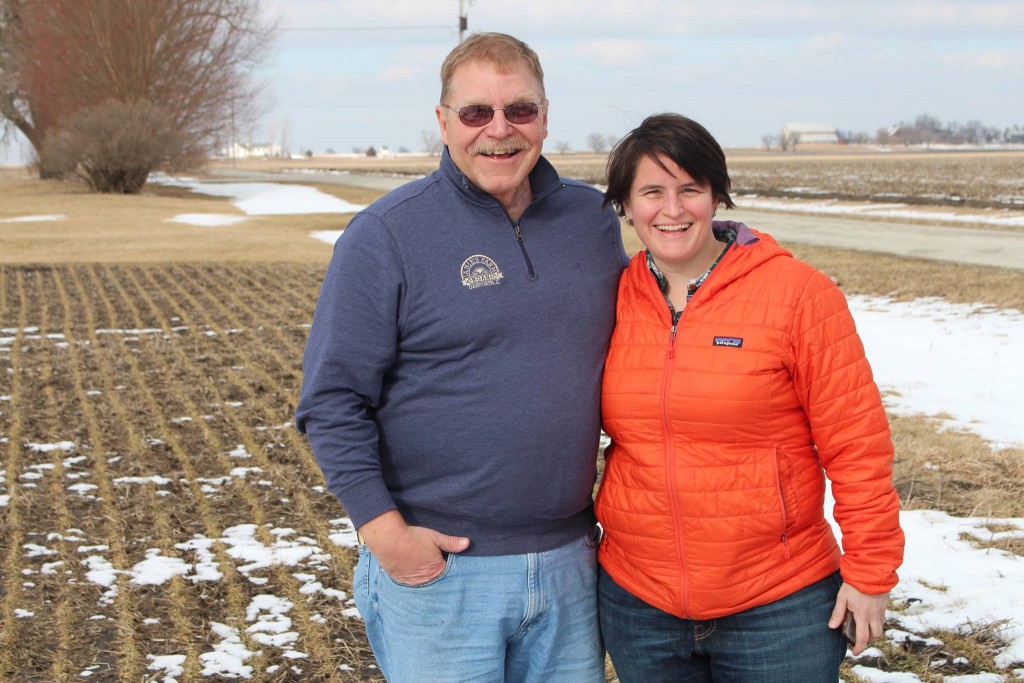 Harold Wilkin is an organic farmer who is building a commercial scale ﬂour mill to sell local ﬂour into the Chicago market. Ellen King is a baker with Hewn bakery in Chicago and she is going to buy ﬂour from Harold. They are standing in a field of Warthog wheat in early March. Photo: Bill Davison

Changes to federal crop insurance over the past few years have put organic commodity growers in a territory that most conventional growers would envy: low risk to lenders.

During a talk at PrairiErth Farm near Atlanta, Illinois, Ritter and farmer/owner David Bishop cited Bishop’s yield of organic corn and soybeans as an example of what’s possible with organics in 2015. Last year, Bishop yielded 85 percent of the conventional average for soybeans, and 105 percent of the conventional average for corn. The PrairiErth organic grain field day focused on Bishop’s 300 acres.

Using data from University of Min­nesota’s FinBin pricing database for the upper Midwest, Ritter projects a net return per acre 3.76 times higher than conventional for organic soy­beans, and 15 times greater return for corn. Returns that remarkable aren’t a matter of input costs—con­ventional and organic run about the same—the difference is consumer demand.

For 2015, Ritter’s not worried about yields. In the fields he has evaluated, he estimates corn and soybeans to be average to better than average, after accounting for water spots.

“When you look at those num­bers and the profitability, it’s pretty plain that it’s a significant advan­tage,” Bishop says of his organic transition.

Ritter recognizes his stance is unusual in the Ag Lending com­munity, but he sees global markets declining for conventional growers, and the demand for organics grow­ing at a rapid pace.

Demand is growing so rapidly, that organics accounted for $947 million in imports in 2014 if coffee is ex­cluded, while organic exports trailed at $553 million. “The timing is really good if you’re contemplating trying organic,” Ritter concluded.

Bishop notes what’s different about his operation is the focus on crop diversity, soil health, com­munity relationships, and that it a multi-generational farm. Bishop’s son Hans and spouse Katie run the farm’s popular CSA and market stands.

Dave Bishop has been farming for 35 years. In the mid 1990’s, he was paying retail prices for his seeds, and selling his crop for whatever price he could get.

Bishop began doing what he says farmers don’t do enough of: considering how he connects to customers. Was he producing what people wanted to buy? It seemed to him that everyone was making money but him. To add value to what he produces on his farm, he started a transition to organic in 1997, adding specialty crops, and incorporating a livestock rotation to improve soil fertility.

“If it stops being fun, it’s a heck of a hard way to make a living,” says Bishop. After 35 years, he says, the last five years have been the most fun.