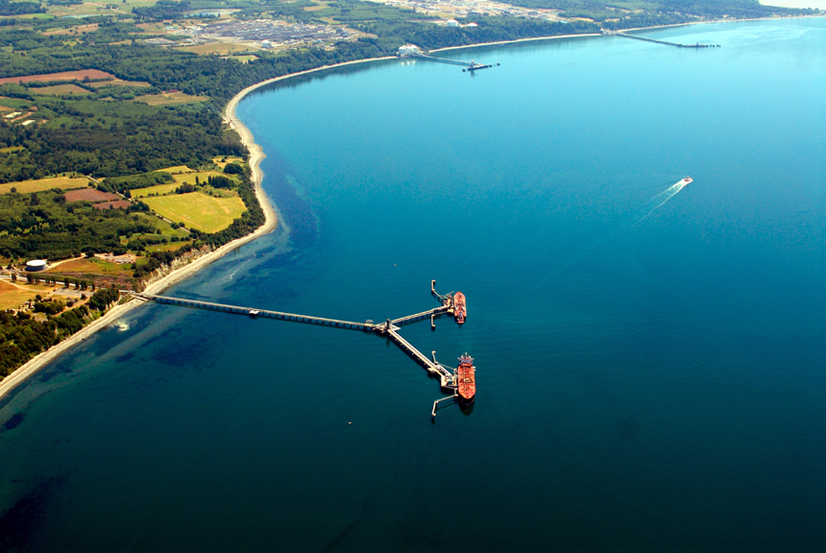 Crude oil tankers docked at the BP piers just north of Cherry Point. In the distance are the Intalco aluminum refinery (top, left) and the Phillips 66 oil refi nery (top, center), each with its own pier. photo: National Oceanic and Atmospheric Administration

The smelly plume of sulfurous gases that wafted over Bellingham Saturday evening, June 3, 2017,  was apparently not an unusual occurrence.[1] It was caused by an overpressure event on the Italian tanker Mare Siculum anchored east of Vendovi Island, awaiting unloading at the BP Refinery near Cherry Point. And emissions from the refinery itself contributed to the noxious gases drifting into the county.

Standard procedure during such overpressures is to vent the built-up gases and relieve the excess pressure on the tanker holds, according to US Coast Guard Lieutenant Krysta Zangle, head of its Foreign Vessel Branch in Seattle. “The smell of the fumes is indicative of cargo vapors being released as a result of pressure build-up within the cargo tanks,” she explained in a detailed email.[2] “This is a normal occurrence that ensures the safety of the tanker and our waterways.”

An inert gas containing mostly carbon dioxide is injected into the tanker holds to reduce the amount of oxygen present there, which can otherwise lead to explosive conditions, she continued. This gas mixes with fumes released from the crude oil, typically from overheating of the tanker deck by the sun. Pressure-relief valves open automatically to allow excess gas to escape, in what one could characterize as a “tanker burp.” Then more inert gas is injected into the holds to keep oxygen levels below 8 percent.

In this incident, the Mare Siculum was carrying Arab extra-light crude oil, a “sour” crude with about 1 percent sulfur content, according to Toby Mahar of the Northwest Clean Air Agency (NWCAA) in Mount Vernon.[3] Thus the nauseating stench that hit Bellingham was probably due to hydrogen sulfide (H2S) and mercaptan (CH4S) gases. In the prevailing southerly winds, the plume first reached Edgemoor, situated seven to eight miles from Vendovi Island, followed by Fairhaven and then downtown Bellingham.[1] Despite many 911 calls, fire department officials could not trace the source of the odor — which, it turns out, was well beyond their turf!

There were at least two other such tanker burps, on Friday and Monday, but prevailing westerly winds drove the resulting plumes east toward Edison and Bow. A similar plume in September 2013 struck Edgemoor, Fairhaven and Bellingham due to the southerly winds at that time [1].

Refinery Emissions
The Mare Siculum docked at the BP refinery late Wednesday, June 7, 2017, and finished unloading its crude-oil cargo at the south pier by Friday morning. Through a birding spotter scope from my home on Orcas Island, I could observe hot gases being flared off at a “vapor combustor” located on the north pier. Again, this seems to be the standard operating procedure, according to NWCAA documents.[4] The agency has jurisdiction over noxious releases at the refinery and its piers, but not from tankers chugging to and fro — or anchored away from it.

This was hardly the only case of noxious fumes being released that week into Whatcom County air. Early Thursday afternoon, June 1, Ferndale residents had complained of a sulfurous odor, which led to evacuation of local schools. The stench was quickly traced to the Phillips 66 refinery on Unick Road, where “an upset in the refining process” led to strong sulfurous odors on site, said a refinery spokesman.[5] Southerly winds then carried the sulfurous fumes inland to nearby residential areas.

And for 40 days and 40 nights beginning April 21 and ending May 30, the flaring of gases had been readily visible at the BP refinery, where flames leapt almost continuously from tall stacks, and at its piers. According to BP spokeswoman Pamela Brady, the flaring at the stacks was caused by a scheduled “turnaround” of facilities — complex maintenance processes to revamp, renew or repurpose them — that lasted nearly two months.

In a May 30 letter to the Northwest Clean Air Agency,[6] BP engineer Sarah Clinton in fact reported that “shutdown activities for scheduled maintenance of its phenolic sour-water stripper, the hydrocracker, and the non-phenolic sour-water stripper … resulted in flaring at the low-pressure flare.” The sour-water strippers are parts of the refinery’s sulfur recovery unit, which extracts sulfur compounds from fuel and water streams and converts them to elemental sulfur. The extraction processes involved are not 100 percent efficient, however, and some sulfur escapes as hydrogen-sulfide and sulfur-dioxide (SO2) gases. Sulfate and sulfite compounds also build up in these units, leading to the need for periodic maintenance and the resultant flaring of gases.

I could easily observe the leaping flames with my spotter scope, especially at night when they were obvious even to the naked eye. The flaring peaked during the evening of May 26, when both low-pressure and high-pressure flares sent tall flames skyward, releasing what must have been hundreds of tons of gases (mostly carbon dioxide and steam, but also trace pollutants such as sulfur dioxide) into the air.

There were three reported incidents during this period when excess amounts of sulfur dioxide (beyond 1000 parts per million, or greater than 0.1 percent) were released during the flaring, according to Ms. Clinton’s letter. During this period, over a dozen complaints came in on NWCAA’s hot line from Birch Bay and Blaine, just north of the BP refinery, of “a really strong odor” that was “very foul right now” and that “irritates my throat and nose.” That sounds to me like sulfur dioxide. And, according to an NWCAA incident report from BP dated May 15, the upper limit on daily releases of sulfur dioxide from these flares was raised to 3,400 lbs — or 1.7 tons per day.[7]

Emissions Data
That limit presumably does not include releases due to flaring at the piers, which seems to occur whenever a tanker or barge is being loaded with refined fuels. The total annual emissions of sulfur dioxide from all sources at the BP refinery came to 781 tons in 2016, according to data obtained from NWCAA records.[8] That’s an average 2.1 tons daily, or 7.2 pounds that year for every man, woman and child in Whatcom County. According to NWCAA’s Mahar, these numbers have come down substantially in recent years; over a thousand tons per year from BP refinery was typical several years ago.

In addition, 362 tons of volatile organic compounds, or VOCs — light, highly toxic hydrocarbons such as benzene, toluene and xylene — were released into the local environment that year. That’s another 3.4 pounds per year for every county resident. And I wonder whether these emissions are due to the refinery’s increased use of tar-sands crude oil and Bakken shale oil as feedstocks, for these crude oils possess higher contents of such light hydrocarbons than ordinary Alaskan or Arabian crude oils.

By comparison, the Phillips 66 refinery just south of Cherry Point reportedly released a mere 45 tons of sulfur dioxide in 2016; maybe it cannot accept and refine high-sulfur crudes as BP does. But that year it released 854 tons of VOCs, or nearly 8 pounds per county resident — more than twice as much as BP.

Combined, the two refineries emitted 826 tons of sulfur dioxide and 1216 tons of volatile organic compounds in 2016. But the hands-down leader and champ air polluter, Mahar noted, is the Intalco aluminum refinery located between the two, which emitted 4794 tons of sulfur dioxide and 719 tons of VOC’s in 2014 (the most recent year for which I could obtain data) — plus a whopping 33 thousand tons of carbon monoxide! All told, that’s over 358 pounds of these air pollutants per county resident per year, dwarfing those from the oil refineries.

Luckily, few people live close to Intalco, where the health impacts would be the severest. But those who live north of the BP refinery can still feel the effects. “We in the Grandview area of Birch Bay have the smell of sulfur much of the time,” noted Dawn Wetheby in a comment to my Northwest Citizen article on burping tankers.[1]

Repeated exposure to high concentrations of sulfur dioxide can affect lung functioning, worsen asthma attacks and aggravate heart disease. According to the Environmental Protection Agency’s ambient air-quality standards, the concentration should not exceed 0.5 parts per million more than once a year. From the Department of Ecology’s air-quality measuring stations near Intalco and in Custer, this level does not appear to have been breached during the recent BP turnaround. But I wonder about the effects of the repeated exposures Birch Bay and Blaine residents have long been enduring.

Not included in these numbers are the hundreds of tons of tiny dust particles emitted — for example, from refinery smoke stacks — that are less than 10 microns across, which can lodge in the lungs. They can even enter the blood stream if they are smaller than 2.5 microns. Nor are the releases of sulfurous fumes from burping tankers, especially the smelly mercaptan gases, which are difficult to quantify.

If the use of imported tar-sands crude oils from Alberta, Canada, increases substantially, as many have projected, the problems of sulfurous fumes will be seriously exacerbated because these crudes can contain up to 10 times the sulfur of typical “sweet” crudes. The light hydrocarbons used to dilute this tar-sands oil so that it can flow through pipelines could also lead to substantially greater releases of volatile organic compounds at the refineries.

Thus energy-intensive industries based on refining fossil fuels can and will foul the air in Whatcom County, especially for people in adjacent communities such as Bellingham, Birch Bay, Blaine, Fairhaven and Ferndale, as happened in the recent incidents. So any such adverse consequences must be carefully evaluated whenever major changes in the operation of these refineries are anticipated. And any serious impacts that surface in these studies should not be ignored.

Physicist Michael Riordan, the author of “The Hunting of the Quark” and coauthor of “Crystal Fire” and “Tunnel Visions,” writes about science, technology and public policy from Orcas Island.