An intensive research program in the United States and Canada is studying why so few salmon in the Salish Sea are returning home to spawn. Studies by more than 200 scientists on both sides of the border have revealed a tangled food web involving a multitude of predators and prey surrounding their primary species of study: Chinook and coho salmon and steelhead trout. To survive, these salmonids must not only become capable predators, but they must also remain vigilant to avoid larger predators trying to eat them. Christopher Dunagan has written a four-part series on the Salish Sea Marine Survival Project, including new findings presented at the 2018 Salish Sea Ecosystem Conference last spring in Seattle. 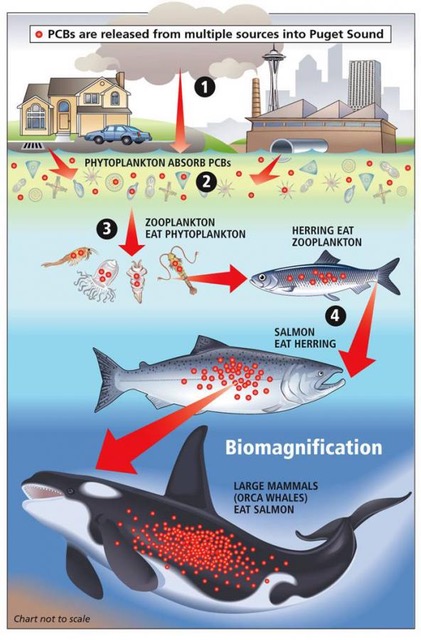 New Studies on Emerging Threats to Salmon
Chemicals, disease and other stressors can increase a salmon’s chance of being eaten or reduce its ability to catch food. We wrap up our series on the Salish Sea Marine Survival Project with a look at some of the lesser-known, but still significant factors contributing to salmon declines in the Salish Sea.

The life of a salmon — finding food, avoiding predators and swimming a few thousand miles — would be complicated enough without disease, toxic chemicals and a variety of other environmental hazards.

Anything that compromises a salmon’s physical functions, sensory systems or cognitive powers puts that fish at risk of death in a competitive marine environment. While some things, such as disease, may kill a fish outright, experts say it is more likely that a weakened fish will be eaten before it succumbs to disease or starvation.

A critical period in a young salmon’s life comes during the transition from fresh water to salt water, when the fish undergoes profound physiological changes, according to Erik Neatherlin, science director in the fish program at Washington Department of Fish and Wildlife. If weakened by disease or chemicals, the chances of survival are diminished before the fish confronts other factors, such as high temperatures or low oxygen levels.

In years when the food supply is high and predation is low, salmon and steelhead survival may turn out okay, Neatherlin said, but such good years have become rare.

“It is in those years, when they need every single advantage, that these other factors start to be very important,” he said. “The more we look, the more we are likely to find other factors.”

Those “other factors” are the focus of this article, which includes summaries of key stressors such as as chemical contaminants, disease, artificial light and harmful algal blooms.

Researchers also found that juvenile Chinook tissues contain a mixture of pharmaceutical, personal-care and industrial compounds. One study of Chinook coming out of five Puget Sound streams revealed that several drugs designed for humans (e.g., antidepressants, heart medications and antibiotics) were in concentrations likely to affect behavior, metabolism and potentially other functions.

Resident fish, which spend their entire lives in Puget Sound, tend to have higher levels of chemicals in their tissues than those that migrate to the ocean. Examples include resident Chinook and coho salmon, along with Pacific herring, an important forage fish eaten by many species. In some fish, the levels found exceed what is considered a lethal threshold.

Disease
Diseases and parasites are common even in fully functioning ecosystems, but the severity of a disease can be exacerbated by human influences, said Paul Hershberger, a pathologist with the U.S. Geological Survey. For example, toxic chemicals can reduce a fish’s immunity and increase its risk of death.

The challenge is to figure out when the rate of disease exceeds a natural level and what factors may increase mortality and infection, he said.

Unlike human diseases, which are more easily diagnosed, fish diseases are hard to study — especially among wild fish, which usually just disappear when predators are around to eat them. When fish die in a hatchery, their bodies can be examined for the pathogen that killed them. As a result, much of the pathology of fish disease has been described for hatchery fish, which don’t always face the same problems as wild fish.

As in other marine waters throughout the world, the list of pathogens in Puget Sound is quite long. One parasite that has received considerable attention is Nanophyetus salmincola, which seems to play a role in the high mortality of steelhead coming out of South Puget streams.

“Nano could be killing the fish outright,” Hershberger said, “but it is more likely to be affecting their swimming ability. Diseased fish are more likely to experience predation.”

Studies in Hershberger’s laboratory on Marrowstone Island confirmed that swimming was indeed impaired, even among steelhead far less infected with the parasite than steelhead found in the South Sound streams.

Nanophyetus salmincola is a parasitic flatworm with a complex life cycle that involves three hosts: a snail and a warm-blooded animal, as well as the fish. Strategies for reducing the infection include disrupting this life cycle, such as finding ways to reduce the freshwater snail population at key times.

Artificial Light
At night on Puget Sond, lights from nearby cities and towns bounce off the clouds and illuminate the water beneath the surface. So far, the increasing human population means ever more light coming down.

“Virtually all salmon predators rely on vision to feed,” said Dave Beauchamp of the U.S. Geological Survey. “Artificial light has increased to a degree that predators can be more effective feeding at night. Predation risks have increased significantly, especially for juveniles.”

Beauchamp, who is studying the effects of light on salmon, said many juvenile salmon migrate at night, and increased illumination gives their predators an extra advantage. If one could reduce the illumination by 50 percent, it would decrease predation by 25 percent, he said.

In research projects around the world, light pollution has been identified with affecting the behavior and metabolism of many animals, from zooplankton to sea birds, and it may be having long-lasting effects on the food web in Puget Sound, Beauchamp said.

How well predators can see underwater depends on both the intensity of the light from above and the turbidity of the water, which is affected by plankton growth, sediment plumes and other factors. As a result of changing conditions in Puget Sound, plankton communities have been altered. At times, the result is more transparent water, giving an increasing advantage to predators that consume young salmon and steelhead.

Beauchamp is conducting research on Puget Sound to see how far down a certain intensity of light will penetrate under various conditions. The goal is to develop a model to predict predation risks under future conditions — including the potential of reducing the light levels and saving salmon from predation.

Harmful Algal Blooms
Toxic plankton, including the microflagellate Heterosigma akashiwo, appear to be on the increase in Puget Sound. While some toxic plankton accumulate in shellfish and are a threat to human health, Heterosigma akashiwo is well known for its lethal effects on salmon, with fish farms sometimes losing millions of dollars during a single plankton bloom.

The organism has been shown to affect the gills of wild salmon, killing the fish outright or reducing its fitness. It is also believed to affect the food web, reducing the prey available for salmon and steelhead, which can affect their survival. In recent years, Heterosigma akashiwo blooms have come earlier in the year, overlapping with more juvenile salmon runs.

Understanding the cause of toxic algal blooms and predicting their arrival are the goals of researchers in Puget Sound. SoundToxins is a surveillance program coordinated by NOAA’s Northwest Fisheries Science Center and Washington Sea Grant. With the help of some 36 partners, water samples are taken weekly by volunteers from some 35 sites throughout Puget Sound during the spring and summer when the blooms are likely to occur. The samples provide an early warning of changes in planktonic communities.

Summing It All Up
To help people make management choices that could increase the survival of salmon and steelhead, experts are developing a computer model that will simulate all the major processes taking place in the Puget Sound ecosystem.

A key part of the model is a mathematical description of the food web — not only describing the bottom-up (food) and top-down (predation) aspects for salmon, but also the food-web interactions among 75 “functional groups,” ranging from bacteria to killer whales.

Food web processes — who eats whom — depends on natural ecosystem drivers, such as sunlight and temperature, as well as human actions, such as fishing and sewage-treatment-plant operations. The model is being designed to predict what might happen if changes are made in certain locations, such as encouraging the growth of forage fish or reducing the number of specific predators.

NOAA’s Northwest Fisheries Science Center is building the Puget Sound model around a framework known as the Atlantis Model, developed by a group of Australian scientists. The model is designed to work with other models under development, including the Puget Sound circulation model, which describes tides and currents, and the Salish Sea nutrient model, which describes the growth of plankton based on nitrogen loading.

“The model will help provide clarity around the questions we have,” said Michael Schmidt of Long Live the Kings, who coordinates the Marine Survival Project in the United States.

The Salish Sea Marine Survival Project, which was launched four years ago, will wrap up toward the end of next year with a report of major findings and recommendations for moving forward, Schmidt said.

“We will be looking through the lens of management and turning the outcomes of our research into potential management actions,” he said.

The findings also will influence overall restoration priorities established by the Puget Sound Partnership through its action agenda and various implementation strategies. Officials involved in Puget Sound recovery continue to stress the importance of science as efforts continue to save endangered species and restore Puget Sound to a healthy condition.