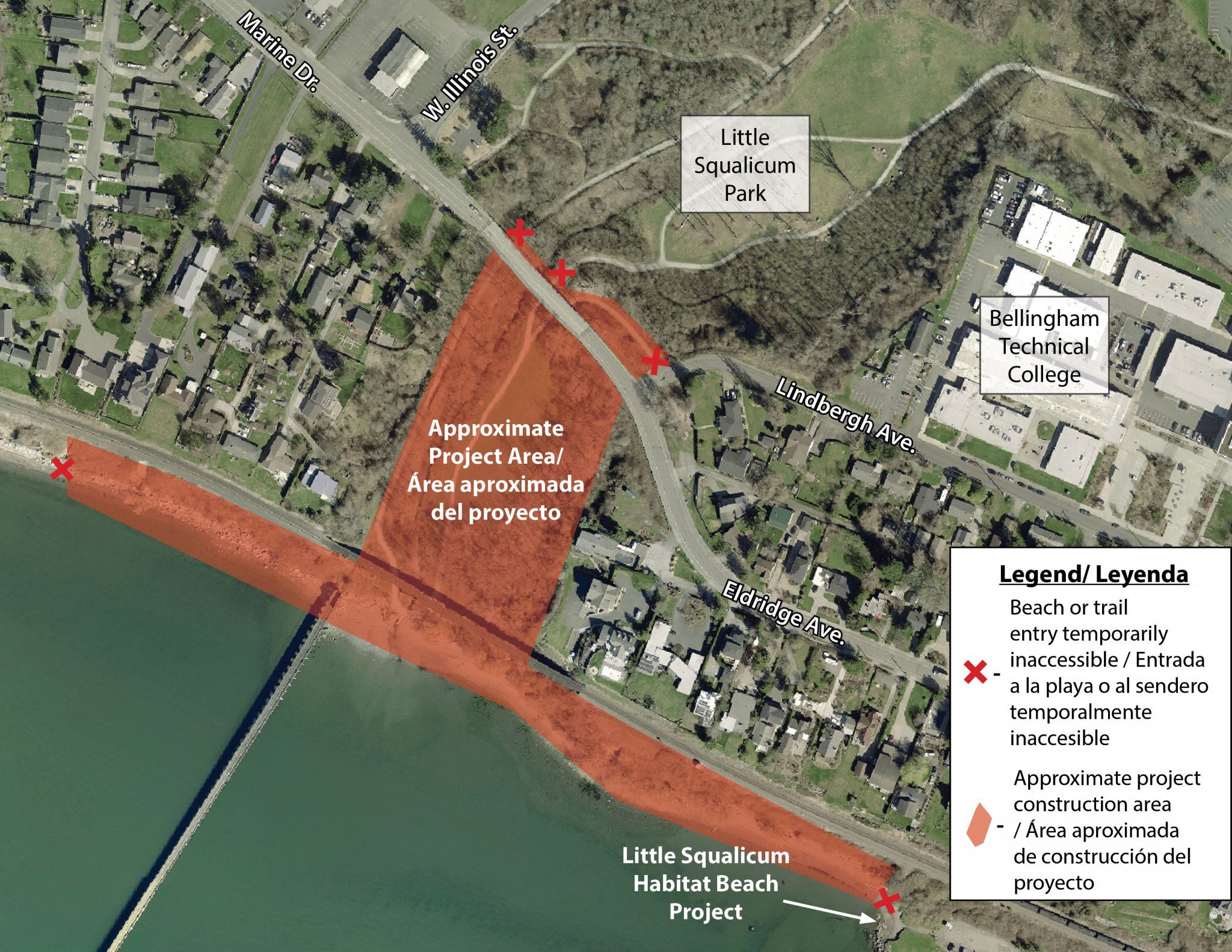 Permits have been approved for the Little Squalicum Creek Estuary Project. Its approximate boundaries are shown here.
courtesy photo: City of Bellingham

Walking along the path near Little Squalicum Beach one Monday afternoon in late May, Cherish Flint and Jeremy Jones, 10-year residents of the Birchwood neighborhood, enjoy each other’s company as well as the natural setting.

Flint and Jones said they walk the trails from Little Squalicum Park to the beach  about five days of the week. Both work from home and enjoy the break by sharing the time outside.

The scenery and natural environment along their walk are about to get even better.

Their small portion of Bellingham Bay is getting a makeover this summer with the city, port and county funding two projects that will reshape the beachfront area.

During a May 25 open house at Bellingham Technical College, the city, along with Blue Coast Engineering, showcased their plans to begin work on the Little Squalicum Estuary and Beach Nourishment projects. (1)

The Little Squalicum project, according to the City of Bellingham website, will introduce a newly formed estuary created to foster endangered salmonid species. It is designed to address the need for additional estuarine habitat in Bellingham Bay, restoring up to 4.85 total acres of coastal habitat including the 2.4-acre estuary. It will also remove a fish passage barrier at the mouth of Little Squalicum Creek just two miles east of the Nooksack River Delta in Little Squalicum Park. (2)

The lower off-leash dog area and beach at Little Squalicum Park will be inaccessible at least until December during construction, and installation of native plants at the site will continue through March 2023.

“The collection of debris in that area really needed to be cleaned up anyway, and, if we took out this whole section in between the estuary and the beach, we would have lost the whole beach,” said Kyle List of Blue Coast Engineering at the open house. “Thus the need for the rock wall to be put in that area.”

Port of Bellingham
Blue Coast Engineering (3) of Seattle received the winning bid and was awarded their first port design project by the Port of Bellingham. (4) Funding for the design came from the Washington Department of Ecology. The team is waiting on one contractor for the project to begin.

Kurt Baumgarten, environmental planner for the Port of Bellingham and managing leader of the project for beach redevelopment, said at the open house that the project will take 8 to 12 weeks, and could begin immediately after receiving the necessary permits.

“On the port side, there will be a wall to sit between the port and pier created with the water levels and wave strength in mind,” Baumgarten said in an interview. “Tidelands there were filled 100-plus years or so ago with debris, and so we will be removing that to create the new beach.

“The port would like to do upland improvements, as well, such as stormwater improvements and the expansion of the parking lot. We would call that phase two, a separate project.”

Baumgarten said that, during construction, it will be necessary to close the parks for safety reasons.

Sara Brooke, environmental coordinator for the City of Bellingham, said the focus of the estuary is on the endangered steelhead and Chinook salmon.

Brooke said the project will assist in salmonids production creating “pocket estuaries” along the beach area. She said that the historic railroad became a temporary inconvenience for the production of endangered fish, but the creation of the estuary along the wetlands will greatly improve water quality in the area by removing and disposing of about 8,000 pounds of contaminated material.

Analiese Burns, habitat and restoration manager for the City of Bellingham, said the benefits of the estuary expand to more than just the endangered species of fish, and includes a habitat for the great blue heron, a large species of wetland bird native to the Northwest, as well as additional benefits for various birds and mammals.

Burns said this type of area is rare within the city limits, and that this location is one of the last remaining habitats available.

Project Benefits
Additional project benefits include new trails, a pedestrian bridge, a walkway and a new loop trail at the park, Burns said in an interview. “There’s also the added educational aspect,” she said. “People get to have an up close and personal experience here that you don’t get to see all that often.”

To facilitate estuary construction, all existing trails will be shifted west to accommodate the estuary, and a new trail network will be installed along with the new pedestrian bridge at the estuary mouth, according to plans on the City of Bellingham website.

A man who gave his name as Ed sits on a log at the beach, scanning the water with his binoculars, catching an occasional glimpse of ospreys nested upon the pier. When he’s not looking out over the water, he is writing in a small green journal. 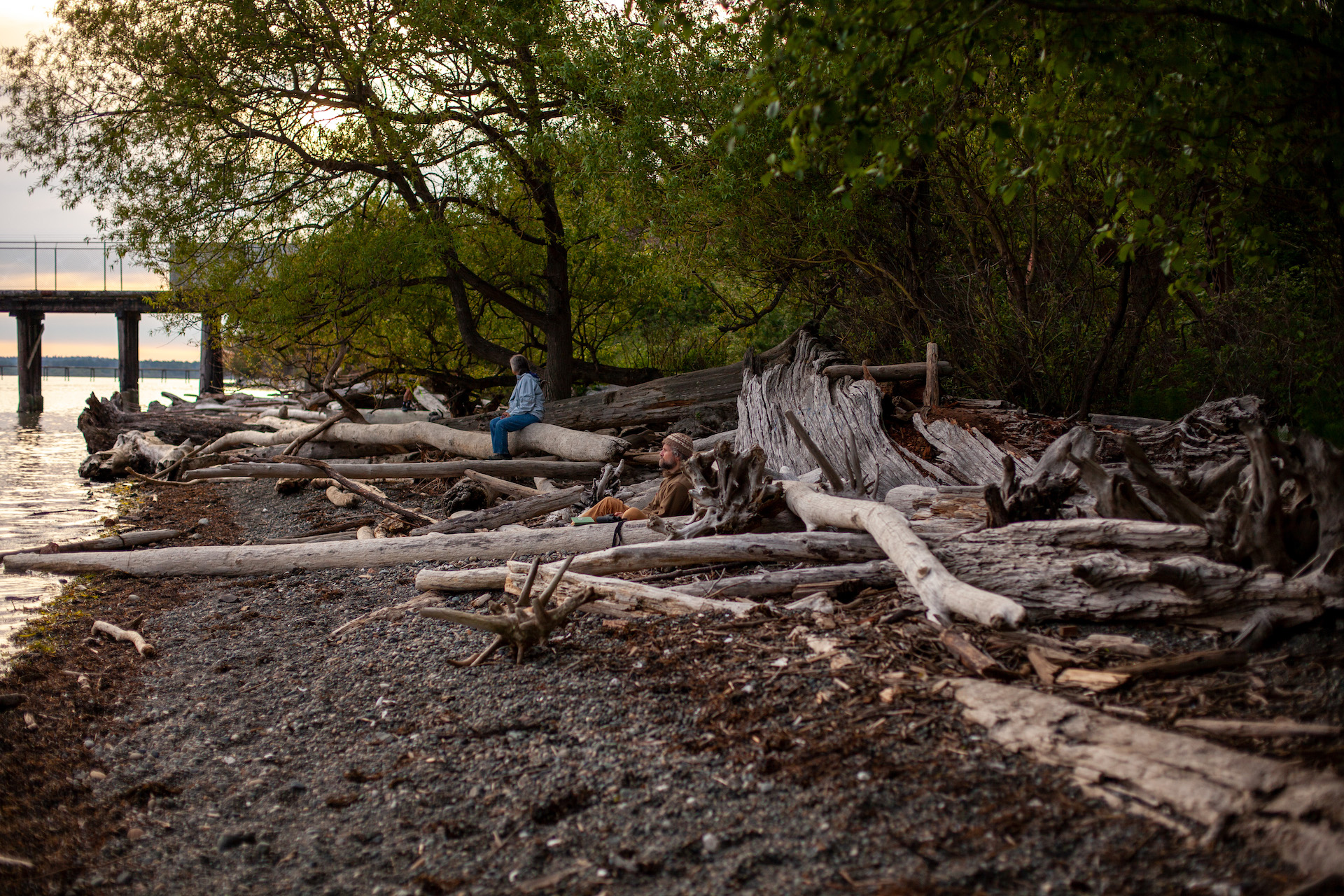 Ed rests upon a dried up log on the Little Squalicum Beach, his notebook and binoculars in hand. Ed enjoys catching glimpses of the osprey nesting on the pier.
photo: Tyler Brown

“It sounds like a cool plan, overall,” he said. “I guess I’m just bummed about the beach being closed while they do this. It doesn’t sound like there’s any real downfall for this, but I guess I wonder about priorities, y’know? There’s a lot of pollution and contaminants in the waterways, and I would like that to be a big first priority.”

Focus on Restoration
Although there is a great deal of focus on the environmental impact for wildlife in the area, Freeman “Fritz” Anthony, lead project engineer for the City of Bellingham public works department, said that there will not be a great deal of “climate reduction activity” for the project, but instead will be focused on the water and quality of wildlife restoration.

It’s a big change for an area the Environmental Protection Agency (EPA) once deemed “one of the nation’s most contaminated hazardous waste sites.” (5)

Less than a half mile northwest of Little Squalicum Park is the Oeser Company — a 26-acre wood treatment plant near Marine Drive.

In August 2005, Oeser signed an agreement with the EPA to pay $8.6 million —  its share of federal cleanup costs for 60 years worth of soil and groundwater contamination. Oeser also paid $500,000 to the state trust to clean up the contaminated park site adjacent to the company property, with the mayor applying for a grant in 2004 promising to match the amount paid by Oeser, according to City Council records.

The federal government spent $14 million to investigate and clean up contaminated company property. About 23,000 gallons of stored creosote was removed from the facility as well as about 8,500 tons of contaminated soil and 27,000 gallons of liquid waste since its designation as a Superfund site in 1997.

Anthony said the EPA cleanup “took care of everything,” and that there was no concern for the city building the estuary.

Anthony said any additional problems would be a part of the master plan, and that much of the runoff at the beach now is normal stormwater runoff that typically comes from neighborhoods like Birchwood.

Complicated Project
Anthony said this has been a complicated project that has taken a long time. He has been in charge of it since 2012, and seeing it come to fruition is a real pleasure.

“The way we were able to make this possible was by getting all of the ‘low-hanging-fruit’ projects, such as the Post Point Lagoon project (6) from 2004 and the Padden Creek Estuary Habitat (7) of 2013, done and out of the way to focus on the big projects, such as this one,” Anthony said.

The Army Corps of Engineers has given the fresh water project a work window of three months and the intertidal area work window, beginning in August, six weeks. Anthony said this is due to the environment in which they are working, ensuring that the timetable will result in an efficient workflow that isn’t impeded by water levels or tidal flow.

The project has been in the works since 2009, with a final plan completed a year later. Anthony said that the project was slowed down because of permitting delays as well as project funding. To date, construction has cost $500,000 of the budgeted $3.4 million in grants provided by the Washington Department of Ecology.

Walkway on Pier
Questions arose at the open house about the sturdiness of the pier and whether the project will do anything about the walkway, which has been closed to the public over safety concerns for more than six years.

Recently, the city accepted a partial donation of the pier (8) from the Lehigh Hanson/Heidelberg Cement Group in late 2021. The city plans to improve the pier after declaring it “culturally and historically significant.” Design for a walkway has been completed, and construction is expected to start in 2023 or 2024, pending permit approvals, according to the City of Bellingham website.

“The issue with the pier is a matter of ownership,” said Gina Austin, economic development manager of the parks and recreation department of Bellingham at the open house. “The Department of Natural Resources hasn’t had ownership of the pier, and doesn’t even want it out there to begin with. As far as I know, DNR wants it gone. But it’s been declared a historic landmark.”

While the projects are being worked on and the estuary is excavated, the beach will be closed, and warning signs posted. This may frustrate some who visit the site regularly, but the payoff, according to those in charge of the projects, will be worth it.

Birchwood area residents at the hearing expressed some frustration at planned closures during construction, though a majority supported the overall goals.

The project, they said, would provide needed changes, increase salmon habitat and improve the environment. Plus it could open a new window onto the beauty of the bay.

“It will be a very special environment that not many places in the state will have, so we are very excited to bring this to the community,” Burns said.

Regular Birchwood neighborhood walkers like Cherish Flint and Jeremy Jones, are looking forward to the completion of the improvements.

“The whole project seems like it’s going to be really great for everyone,” Flint said, a canned drink in hand and a smile on her face. “There are a lot of multifamily households in this neighborhood, and having a little something extra like this is going to be really wonderful.”

• Provide an aesthetic enjoyment for the general public

• Promote a nutrient and sediment exchange

• Create a protective fencing for the beach

Tyler Brown is a senior at Western Washington University and an intern for Whatcom Watch, finalizing a bachelor’s degree in visual journalism with dreams of being a foreign correspondent someday.