by Laura Weiss and Karlee Deatherage 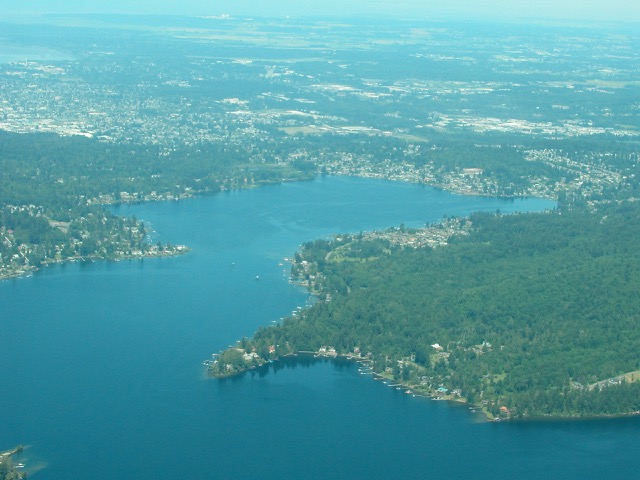 A restored and permanently protected Lake Whatcom Reservoir to serve as the primary source of clean drinking water for current and future Bellingham and Whatcom County residents that requires minimal chemical treatment to exceed all standards of the Safe Drinking Water Act.

That was the vision articulated by the Lake Whatcom Watershed Advisory Board in January 2010. The 11-member board is appointed by the mayor of Bellingham for three-year terms. Most of us can and should embrace that vision especially because Lake Whatcom is the drinking water source for over 100,000 residents of Whatcom County — over half the county’s population.

A significant majority of Bellingham residents — 81 percent — think it’s extremely or very important for the city to prevent further development in the Lake Whatcom watershed, according to the 2018 City of Bellingham Residential Survey, which was published in February 2019.

When we prevent further development, we are stopping the potential for increased phosphorus and other contaminants from entering the lake. This means cleaner, cheaper, and safer water to drink.

Most cities realized this fact long ago and have fully protected their sources of drinking water. Everett and Seattle have their water sources completely forested in the foothills. In Portland, for example, the Bull Run watershed is off limits even to hikers.

What have we achieved on the decade-old Lake Whatcom Watershed Advisory Board’s vision and goals? We would assert that we have not been moving in the right direction.

Water Quality Deteriorating
We can start by looking at the city of Bellingham’s website: “In recent decades, the water quality in Lake Whatcom has been deteriorating due to increased phosphorus inputs that are resulting in algal blooms and depleted oxygen levels. In 1998, Lake Whatcom was placed on Washington’s list of polluted waters because it no longer met the state’s dissolved oxygen level requirements. … In the meantime, Lake Whatcom is also vulnerable to many additional threats.”

A cleanup plan for Lake Whatcom was issued by the Environmental Protection Agency and Washington Department of Ecology in 2016. This cleanup plan (also known as a Total Maximum Daily Load or TMDL) requires the city and county to prevent 3,150 pounds of phosphorus from entering the lake annually by the year 2066. To date, 436 pounds of phosphorus have been prevented — at a significant cost to taxpayers.

Meanwhile, most of the activities that lead to more pollution continue mostly unabated in the watershed. For example, there are about 16,000 people living in the Lake Whatcom Watershed, in more than 7,000 homes. An estimated 1,563 more homes could be built in the watershed, which would account for another 3,643 acres that could be developed, according to the 2019 Lake Whatcom Watershed Annual Build-Out Analysis Report.

The 2010 Lake Whatcom Watershed Advisory Board recommended a number of short and long-term goals in order to achieve their vision. Let’s look at those more carefully:

Protection
“Permanently protect all remaining undeveloped land within the Lake Whatcom Reservoir watershed from future development in the next five years” is the first short-term goal listed. We certainly have not met that goal, as there are still over 1,500 additional homes that could be developed in the watershed.

The Lake Whatcom watershed encompasses about 36,000 acres. Only 3 percent of this land is in the city boundaries. The remaining 97 percent is primarily under Whatcom County’s jurisdiction and some is under Washington Department of Natural Resources (DNR) for timber.

A total of about 10,000 acres of land has been protected from development in the watershed. The city’s Lake Whatcom Reservoir Property Acquisition Program has purchased 2,208 acres — at a cost of $32 million — and another 8,000 acres have been protected from logging since the DNR reconveyed the land to the county for parks and recreation.

Nonetheless, it’s clear we are still allowing activities that threaten our water quality. In 2018, the county issued 101 permits for land disturbance activities, shoreline exemptions and construction. The DNR approved 317 acres of land for timber harvest, 13,000 feet of road construction, and 117 acres were treated with herbicides.

The Lake Whatcom Watershed Advisory Board recommended a series of actions, some of which are being done, and others that have yet to be implemented: these recommendations included working with private landowners to reduce their impact on water quality, purchasing more land and homes in the watershed, and ensuring adequate funding for all the work needed.

The city, county and Whatcom Conservation District have implemented a Lake Whatcom Homeowner Incentive Program to provide technical assistance and financial incentives for property owners in the watershed who take action on their property to reduce pollution.
Only 64 properties participated in the program in 2018. In 2018, Whatcom County and the City of Bellingham spent a total of $201,304 on the Lake Whatcom Homeowner Incentive Program (HIP). The total 2018 cost for all county and city Lake Whatcom Stormwater Program activities, including capital improvement projects, was $1,062,000.

Ensuring adequate funding is always a difficult and very subjective goal. According to the Lake Whatcom Management Program 2018 Progress Report, over $9.5 million was spent on activities toward protecting the lake. The unfortunate reality is that as we continue to allow more building, more logging, and more people driving in the watershed, the more it will cost taxpayers to try and “fix” the problems these activities cause.

Excess phosphorus can cause an explosion of plant growth like algae. Overgrowth of algae can block sunlight from other plants and aquatic life, killing them or limiting growth. When algae and other plants decompose, they use oxygen and create “dead zones” for fish and aquatic life.

Treating water to be used for drinking when there is significant algae growth comes at a huge expense. The city of Bellingham spent over $14 million to install a pre-treatment facility, which came online earlier this year. Prior to that, the city relied heavily on chlorine gas to remove algae during the treatment process. Excessive use of chlorine can leave behind harmful disinfection byproducts — which is why the city shifted to a pre-treatment dissolved air flotation (DAF) process to remove algae with less chlorine.

The cost of business as usual is getting higher. For example, $500,000 was spent in 2018 on a new stormwater treatment facility that is expected to reduce 14 pounds of phosphorous per year going into the lake. Each pound of phosphorus removed is costing us over $35,000 (other efforts to reduce phosphorous could be less expensive). If we do the math, it will cost our community over $110 million to “clean up” the lake in order to reach 3,150 pounds of phosphorus reduced annually.

Each year the city, along with all public water systems around the U.S., is required to issue a Consumer Confidence Report (CCR) to inform the public about detected contaminants in their drinking water. This includes whether water providers are exceeding limits for contaminants such as disinfection byproducts (total trihalomethanes — TTHM – a known carcinogen), lead, copper, bacteria, and chlorine. The 2015 city of Bellingham CCR reported the highest level of TTHMs recorded, with an upper limit range of 79.9 parts-per-billion while the SDWA limit is 80 ppb. That upper limit range has since decreased.

Every time we disturb land to cut trees or build structures, we are contributing to the degradation of the lake. Scientists know that natural forest cover and undisturbed forest soils are the most effective means to filter stormwater runoff.

Another big expense for our local governments is the effort to keep Aquatic Invasive Species (AIS) like zebra and quagga mussels out of the lake. Aquatic Invasive Species infestations can cause a host of economic and environmental impacts, such as displacing and out-competing native species, damaging infrastructure and boats, clogging intake structures, and impeding the flow of water to municipal water supplies. If zebra or quagga mussels successfully take hold in Lake Whatcom, replacing infrastructure and chemical treatment to the lake will cost taxpayers hundreds of millions of dollars.

The threat from Aquatic Invasive Species is serious and provides an example of how taxpayers are subsidizing those who live on and play in the lake. In 2018, it cost the city over $490,000 to administer the boat inspection program to try to avoid contamination by invasive species. Boat owners paid about $139,000 in fees — meaning that taxpayers foot the bill to the tune of $350,000 for the year. Those costs will be nothing if and when an invasive species takes hold in Lake Whatcom.

It’s clear we are falling short on the Lake Whatcom Watershed Advisory Board goals, and much more bold action is needed to protect our drinking water and save taxpayers from the expense of future cleanup and treatment.

People for Lake Whatcom
A group of citizens met recently to discuss these issues. People for Lake Whatcom convened a meeting and we shared what we see are the biggest threats to the lake — most of which were identified by the advisory board 10 years ago. We are concerned that our decision makers are allowing business as usual in the watershed, which will lead to further environmental degradation and could become very expensive.

The city and county are currently drafting their Lake Whatcom work plan for the next five years. We urge decision makers to move beyond a business as usual approach and take bolder actions to protect our irreplaceable community asset.

The science tells us to expect rainfall patterns and snowpack levels to decrease significantly in the next few decades, meaning that our need for Lake Whatcom to be maintained as a clean and safe source of drinking water will be even more critical in the future.

Going back to the 2010 Lake Whatcom Watershed Advisory Board document, they concluded with the following plea:

A clean and healthy Lake Whatcom Reservoir is indispensable to the long-term viability of Bellingham and the surrounding county. The many generations that follow us will, appropriately, judge us on how well we restored and protected their drinking water.

We are at a crossroads. We will either embark with commitment and purpose to create a community vision on the imperative for a clean reservoir and invest the considerable resources that will entail or we will persist in half measures in the name of progress and watch a critical resource continue to decline.

By acting now rather than later, we will maximize the effectiveness of our efforts and minimize the resources that we must expend. It is with this insight in mind that the Lake Whatcom Watershed Advisory Board submits these recommendations to the City Council.

Laura Weiss has 30 years of experience in environmental policy and sustainable business and now spends her time volunteering in the community. She is the current President of People for Lake Whatcom.

Karlee Deatherage is the policy analyst at RE Sources for Sustainable Communities where she is focused on protecting and restoring our watersheds in Northwest Washington.