Kitchen Table Activism: From Hard Rock Mine to Nature Preserve 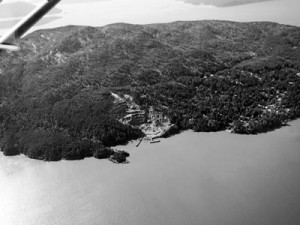 This aerial photo of Lummi Mountain shows the orientation of the Lummi Island quarry property and pit. The shoreline and Smugglers Cove open into Hale Passage in the foreground with the San Juan Islands seen in the distance to the west. The forested areas include private land holdings, Lummi Island Scenic Estates residential community and Washington Department of Natural Resources NRCA’s- Natural Resource Conservation Areas protected as outstanding examples of native ecosystems and habitat for endangered, threatened and sensitive plants and animals, and scenic landscapes.

Twenty years ago, who dared to dream that the Lummi Island quarry might one day become a protected nature preserve? At the time in 1995, a new operator hoped to expand the 10 acre pit to more than 200 acres from the shoreline up the east face of Lummi Mountain.

The expansion looked inevitable, but in 1996 The Lummi Island (LI) Conservancy* challenged the plan before the Whatcom County Hearing Examiner with the result that the allowable mine size was limited. And in 1998, the county approved a 20-acre Mineral Resource Land (MRL) designation for the 105-acre property. The LI Conservancy became involved again in 2011 when renewed expansion of mining operations at the site intensified noise and dust impacts to neighboring residences. Several of those property owners joined forces with Conservancy members new and founding-now in their 80’s — to again challenge the mining operation.

What looked impossible 20 years ago is real today — the Lummi Island Heritage Trust, a local land trust dedicated to conserving land on Lummi Island, has purchased the property for permanent protection. The Heritage Trust will restore the areas damaged by mining and create a nature preserve that will be accessible to us and future generations of plants, wildlife and people. Some see this as a David vs. Goliath morality tale for our beleaguered planet – a story of the little guy standing up to big entrenched interests extracting wealth from the natural world with little concern for long-term harm.

Though our story may be a bit less dramatic, the effort required to challenge the status quo was no less grand. It involved dozens of people contributing their talents and time and setting the stage for a serendipitous transformation whose time had at last come. Perhaps this was best expressed by Elden Hillaire of the Lummi Nation’s Natural Resources Commission. Upon hearing news of the purchase, he said, “That’s a good step in the right direction for Healing of Mother Earth!!”

Rapid Expansion
Before 1990, quarry operations more closely resembled a Mom and Pop effort supplying gravel and rock products for local use; a six pack could get you some rock. Over time, changes in ownership led to more ambitious plans to expand operations and regional markets. By 2011, quarry operations had grown to industrial scale. Going well beyond the “C” Street yard in Bellingham, 120-foot long barges loaded with gravel and rock regularly headed out to Skagit, Snohomish and King counties. Blasting, rock crushing and barge loading at two pier facilities brought the continuous beeping of heavy equipment back-up alarms. Blasted rock crashed 200 feet down into the pit for three crushing plants, each creating a giant pile of gravel of differing specifications. The crushing plant capacity had expanded to 800 tons of rock per hour. Hours of operation extended to the legal allowable limit, from 7:30 a.m. to 5:30 p.m., Monday through Saturday. Tug boats came and went as barges were loaded, occasionally at night under lights. Prevailing winds carried dust and noise into homes sitting north of the quarry, while blasts sometimes knocked pictures off walls. High pitched drilling brought to mind some monstrous dentist boring into a giant tooth.

What started out as a NIMBY (not in my backyard) protest by neighbors soon took on greater significance. Quarry operations were located on the shoreline of Smugglers Cove, which opens out into Hale Passage. Mining and barging activity threatened the once beautiful cove with its pocket beaches, eel grass and kelp beds, forage fish and juvenile salmon. This had to become a fight bigger than a few cranky neighbors. Early in 2011, a telephone call to the citizen organization Preserve Our Islands (POI) helped set the stage.

Good Advice
POI was instrumental in leading a 10-year effort to stop expansion of a gravel pit on Maury Island, located in South Puget Sound off Vashon Island near Seattle. When we called, the Maury Island quarry property had just been purchased from the mining company owner with public and private funds to create a major marine preserve. POI Executive Director Amy Carey encouraged us when she said: “You can do this. We started with three people around a kitchen table.” Her first piece of advice was to “get a good lawyer and work with the regulatory and legal systems, do your homework and be persistent!”

Getting Organized
The LI Conservancy took that advice and immediately hired an experienced land use attorney. We created a “Quarry Campaign” website to raise public awareness and solicit tax deductible donations for a legal fund. Happily, a neighbor of the quarry turned out to be a talented videographer who understands the power of a visual image. Isaac Colgan created a video highlighting our concerns, including the increased danger of a serous landslide if mining were allowed to expand. (To see the video, go to https://goo.gl/wTupfZ or search for “Lummi Island Quarry Expansion” on YouTube.)

Months earlier, the quarry owner Lummi Rock LLC had requested approval to mine an additional 27.5 acres at the site. Isaac’s video dramatically zooms in on the island and quarry pit  as he explains how a 47.5-acre pit would further affect the Lummi Island shoreline. A 20-acre scar disfigures the scene and once doubled, dominates the view visible from points far north and south of Bellingham. The video has more than 2,400 hits on YouTube (as of Nov. 17, 2015).

Aerial footage included in the video was shot with the help of a local pilot (who prefers to remain anonymous). Since the spring of 2010, the pilot had been flying his plane over the quarry, taking photos in an attempt to alert county officials about what he thought was illegal expansion of the mine. He sent the photos to county authorities asking for an investigation. In response, authorities from Whatcom County Planning and Development Services, which issued the operating permit, and the Washington Department of Natural Resources, which oversaw mining reclamation and lease boundaries, paid a visit to the Lummi Island quarry.

Sure enough, it was true. The mine operators had exceeded their permit boundaries and constructed a new haul road without the required permit. For the next three years, our faithful pilot continued to monitor the quarry from the air, providing invaluable photographic documentation for citizen action and regulatory response. The quarry operators had operated for years without effective oversight, hidden from view by a buffer of trees on land, and only visible by water or air. This was about to change.

Gaining Momentum
Chance encounters brought more talents to the effort. Jeff Otis, a land use consultant with 30 years experience, got involved as a result of a backyard chat while visiting his rental property near the quarry. He contributed many hours of pro bono expertise over the next three years, especially in the area of SEPA (State Environmental Policy Act) law. An island lawyer became the pro bono legal liaison with our Seattle land use lawyer. A temporary “Quarry Campaign” website (which has since been shuttered) was faithfully maintained by Nancy Ging, an island volunteer with web host expertise. Dozens of people donated money to the legal fund, wrote letters and comments, and attended hearings.

Regulatory Issues
In the beginning, we encountered a steep learning curve, starting with the appeal of a SEPA determination in 2011 for the quarry expansion application. Paul and Leslie Dempsey and I did our best to respond to the legalistic forms required and paid the $750 fee. Quarry operations were authorized by a complex array of regulatory agencies: Whatcom County Planning and Development Services (and their Shoreline Management Program), two divisions of the Washington Department of Natural Resources (DNR) – shoreline aquatic and upland forestry; the Northwest Clean Air Agency; the Washington Department of Ecology; the Washington Department of Fish and Wildlife; and the Army Corps of Engineers. Each of these agencies had a particular area of interest, sometimes with overlapping authority.

It was clear early on that complaints and code violations needed to be reported to the right person in the right office. For example, nothing happened when an oil spill allegedly caused by quarry activities was reported to the Coast Guard, beyond a cursory sail-by look; however, oil spills reported to the Washington Department of Ecology in 2012 were taken very seriously, and they have the means and authority to investigate. Complaints needed to be accompanied by specific information like parcel numbers and specific code violations and, if possible, photographs. We learned the importance of reading and understanding regulating permits and relevant county code and state law.

Cordial, credible relationships with regulatory officials and employees were also important, understanding that these people are busy and under a lot of pressure from disparate and often conflicting parties. Personnel and budget limitations mean regular inspections do not take place; enforcement is complaint driven. We took upon ourselves the job of monitoring the quarry site and providing detailed information and consistent follow-up. With the help of our legal advisors, we sent letters to county officials referencing specific aspects of law and interpretation regarding contested actions. We attempted these efforts with an air of cooperation in pursuit of what we were sure was the public good.

Over the next two years, 2011 through 2012, we helped alert various regulatory agencies to the following:

1.    shoreline infrastructure was expanded and built without permits;
2.    violations of Ecology’s sand and gravel permit were on-going;
3.    water was being withdrawn from local streams without a state water right;
4.    the DNR aquatic lease had been violated;
5.    operations were being conducted outside permitted hours;
6.    air quality violations were periodically occurring;
7.    sunken barges were sitting illegally on state bedlands; and
8.    mining operations were continuing outside allowable permit boundaries.

The Time is Right
The LI Conservancy’s goal was not to put the quarry operators out of business. Our intent was to assure that the owners obeyed the rules in the hope that on-going environmental damage could be stopped and impacts to neighboring residences might be reduced. As it turned out, the quarry owner was defaulting on bank loans and in trouble with creditors. This led to a court receivership in June 2013 and the property was put up for sale. The timing was right. Advice to be persistent and remain optimistic had paid off. Unexpected things can happen over time that may be in one’s favor.

The decision by the Lummi Island Heritage Trust to bid for purchase of the 105-acre property was not easy. It was preceded by a detailed feasibility exploration conducted by a volunteer task force. Two years of intense and persistent negotiations with the receiver followed — ably led by LIHT Executive Director Rebecca Rettmer and Board President Janice Holmes. Local geologist Dan McShane was instrumental in highlighting the poor economic prospects of accessing the rock resource based on market conditions and permitting challenges for the highly regulated shoreline. Real estate development didn’t pencil out either. In the end, the receiver concluded that conservation would be the best use of the property and accepted the Trust’s offer.

We should note that public awareness would not have succeeded if not for Whatcom Watch, which agreed to publish an article about the quarry in October/November 2011 when no other news outlet would. The article became the first of 13 penned by the Lummi Island Conservancy President (Meredith Moench) from 2011-2014. The in-depth articles alerted and educated citizens throughout Whatcom County regarding serious mining impacts to the marine environment at the site and the need for regulatory enforcement.