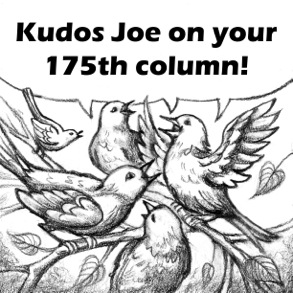 Editor’s Note: Joe’s first article appeared in the April 2002 issue of Whatcom Watch. It was so successful editor Sally Hewitt asked Joe if he was intersted in writing a monthly column. He accepted the offer and the first Beaks and Bills column appeared on page 7 of the June 2002 issue. The column became a permanent occupant of page 3 with the August 2005 issue. There have been 177 issues of Whatcom Watch since Joe starting writing his column so that means he has only missed two, September 2002 and October-November 2004. See the February 2016 issue for a list of his first 150 columns. 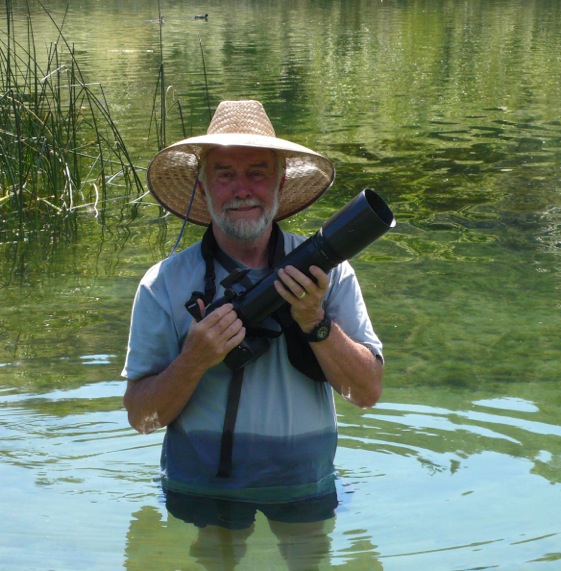 It has been brought to my attention that this month’s offering will be the 175th column of Beaks and Bills. Well, that alone seems to merit a look back, both to see how it all started and where it’s been since 2002. So if I may, allow me to be your guide as I try to make sense of it all.

When I look at my own compilation of the columns that I’ve written for Whatcom Watch since April of 2002, I notice that there have been a few riders attached to the regular column. I can see interviews with notables such as David Sibley (June, 2003) and Robert Bateman (January, 2003); three book reviews and a review of the popular documentary, “Winged Migration” in September of 2003; and the two-part story of my own fascination with our local Sequoias (November/December, 2005).

In all that time it appears that I missed only two columns…they’re listed as “Vacation” according to my log. They both happened early on so it was probably more about writer’s block and/or the lack of rhythm necessary to write a monthly column that readers might find interesting. Given the title, birds have always played a major role in the substance of the columns. The research that I did along the way allowed me to learn some of the finer points about birds that I might otherwise have missed. Other than the idea that the column would focus on birds, I never had a plan in mind as far as adhering to any semblance of order. On occasion, I put together a two-part column but my favorite was the seven part series about “Birds According to Peterson.” This series ran from March to September of 2012 and went into detail about Roger Tory Peterson’s method of learning about the different and very distinctive categories of birds. This method is one that every birder should know, regardless of their level of experience.

While the initial idea was to keep things closer to home, I soon found that the column could travel with me wherever I went. In fact, the very first “Beaks and Bills” column (June, 2002) took Cindy and me to one of my favorite National Wildlife Refuges (NWR), the Malheur NWR in southeastern Oregon. We visited other NWRs, national and state parks, local parks and trails, great birding areas in lower British Columbia, Texas, California, and Louisiana. If you recall, we even went to Baja (April, 2014) to find great birds and have a taste of what the local snowbirds experience every year when they leave winter behind for a few months.

Two of our best road trips were chronicled in 2007 and again in 2008 when we drove into the heart of British Columbia to explore the same general area during fall and again during the following spring. As it is with anyplace you might go, the seasonal changes were remarkable in the area around Bella Coola and Anahim Lake. Birdlife on the fall trip was slow but it picked up considerably in the spring. While grizzlies kept us alert on the Bella Coola River in September, loons serenaded us day and night on Anahim Lake in late May.

Going old school on the road, I kept notes in an actual notebook and expanded on the original after we got home. It was always fun to be energized right after a road trip and write about it as soon as possible — while the memories were still clear and the excitement lingered. Being on the road has always been very appealing to me, and it’s no secret that I plan cross-country trips that have wildlife refuges factored in for stops along the way. The three-week trip to Louisiana in the fall of 2010 was a classic example. The variety of bird species along the way provided enough material for an entire column or two.

Long-distance road trips were not the only source of column opportunities. I remember promoting the idea of walking from home to see birds in our respective neighborhoods (Walking Whatcom Creek, May, 2013); using two wheels instead of four (Birding on Bikes, May, 2017); and even birding from water level (Chuckanut Paddle, August, 2014). These ideas were geared toward birding closer to home and learning to appreciate the wealth of local bird life that we have within reach. To that end we explored practically every park in Bellingham. We focused more attention on Whatcom Falls Park than any other, simply because it deserved the recognition.

We’ve had occasion since 2002 to cover birds and bird watching in all four seasons and in a variety of locations, from cobble beaches at sea level to alpine terrain and mountain meadows covered in heather. Oddly enough, one column focused on a snowshoe trip to Artist Point on Independence Day (Artist Point, July, 2015) and it illustrated the ability we have to find snow in the middle of summer. Actually, the road to Artist Point was still closed so our choices were limited if we wanted to get to the end of the road. A memorable photo that I took on that day was of a male sooty grouse, calling to his mate while standing on ten feet of snow.

As many times as I have been asked about which bird is my favorite, I’ve also been queried about my favorite columns. I’ve already alluded to the seven-part series about Roger Tory Peterson’s system of field identification as my favorite series. But when all is said and done, I believe that I most enjoyed columns that dealt with questions from readers asking for recommendations about bird books, birding optics, best locations, and the general array of paraphernalia that make the pursuit of birds more enjoyable. Offering bits and pieces of information about making ourselves better birders seems to run parallel to a favorite book of mine, “The Complete Walker” by Colin Fletcher (Alfred A Knopf, 1968). Like Colin, I imparted lists of things that work for me but I’ve always encouraged everyone to find their own level of commitment and passion. We’re all the same, but we’re all different.

In retrospect my propensity to share and the inner photojournalist/high school biology teacher have found the perfect outlet in this column. My hope is that in the past sixteen years readers have enjoyed reading my ramblings as much as I have enjoyed writing about them. As I said in the beginning, this is #175 and I’d really like to reach #200, if all the stars line up just right. If you’re interested in reading any of the back issues, they are online at www.whatcomwatch.org. Just go to the site and click on Past Issues to find and read about all the adventures you might have missed. And thanks for reading! Joe
______________________________