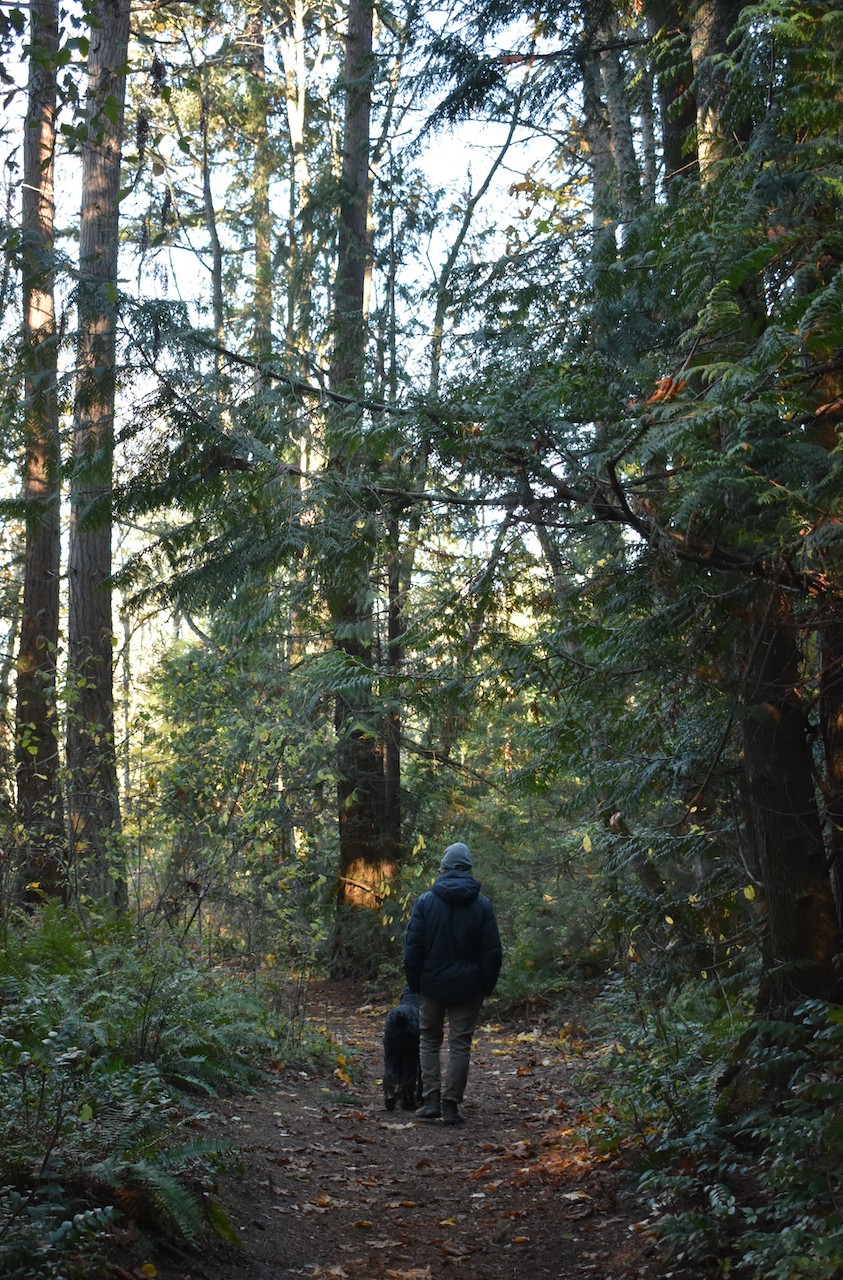 Geoffrey Knight has been visiting the Hundred Acre Wood for nearly thirty years, wandering to get lost or walking his dog, Jack.“This is a hidden gem; people come in for solace,” Knight said. “I hope it never changes.”
photo: Emma Bjornsrud

On a recent summer weekend, Frank James is collecting data about who uses the Chuckanut Community Forest — counting walkers and runners, and taking note of bikers and dogs on- and off-leash.

“A group came by, and they stopped and were chatting with me, and then they looked down and said, ‘Look, there‘s a dog off-leash.’ Well, it was actually a bobcat,” said James, president of the Chuckanut Community Forest Park District. “There’s a male and female bobcat that live down in adjacent properties, but they’re here a lot.”

Sharing this land with casual strollers, hikers, families, dogs and wildlife will become more structured soon, further protecting this place from what could have been a far different outcome.

Change is coming in the form of a management plan approved by the Bellingham City Council on Sept. 12 for this beloved park (1). The council also declared the park’s new name: Hundred Acre Wood.

The plan details the goals of ecological restoration and protection, improving user experience, providing outdoor education, and planning for climate resiliency in the park’s operations and management.

The new name, while familiar to many, is deceiving; the park boasts closer to 112 acres, with 5.3 miles of public trails. Sitting on unceded Nooksack and Lummi land, this forested wetland is home to unique natural features and serves as an urban wildlife corridor.

The wetlands are the headwaters of Padden and Chuckanut creeks, both salmon streams.

Developments That Could Have Been
The property was historically used and cherished by the citizens living in the area. Developers had their own plans.

In 1996, the Madrona Development Corporation of Seattle proposed a 1,400-unit housing development on 101 acres exactly where the Hundred Acre Wood now sits.

Citizens, concerned about the loss of community greenspace, voted in 1997 to renew the Greenway levy; it was called Beyond Greenway. The Greenway levy was first approved in 1990; it was renewed a third time in 2006 as Greenway III and a fourth time in 2016 as Greenway IV. Greenbriar Northwest Associates and their investor, Horizon Bank, acquired the property in 2004 and proposed another housing development in 2005: Fairhaven Highlands, clocking in at 700 units on 85 acres.

The land was for sale for years at prices up to $26 million. The city had shown interest in purchasing the property since 1997, but could not afford it until 2010 when Horizon Bank went bankrupt, and the park was transferred to Washington Federal Bank. The next year, the city purchased 82 acres of the forest for $8.23 million from Washington Federal to protect it from development.

The money for the purchase came largely from neighborhood funds and fees, but $3,232,201 of it came from a Greenways Endowment Fund loan. That meant the money had to be paid back toward the maintenance and expansion of Greenways properties.

Two years later, with over 1,600 signatures collected, south Bellingham residents, west of I-5 voted to levy on themselves a 28 cents per $1,000 property tax to repay the loan over 10 years.

The Washington State Recreation and Conservation Office funded the city’s purchase of almost a dozen acres of the North Chuckanut Bay Greenway for recreational use in 1997. The city reached the 25-year anniversary of its involvement at the Hundred Acre Wood this year.

The Whatcom Land Trust partnered with the city in 2001 to create the first conservation easement on the property, protecting 16.5 acres in perpetuity. The remaining acreage included in the Hundred Acre Wood property is made up of surrounding Interurban Greenway.

The Woods’ Wetlands
The forest is a popular destination for hikers, runners, bikers and dog walkers.

“One of the unique features of the woods is that much of the area is technically forested wetlands,” said Ed Grumbine, a recently appointed park district commissioner. “But the average person … separates wetlands from forests. They think of wetlands as salt marshes or coastal habitat where there are few, if any, trees.”

Frequent and unregulated use of the area has caused degradation of the wetlands over the past few decades. Development efforts in the late ‘90s and early 2000s left behind additional destruction of the fragile wetland ecosystem.

A large, square area in the northwest corner of the park has been taken over by blackberry brambles taller than the average adult. A deep gravel pit along the land’s perimeter was dug and abandoned by developers almost two decades ago.

On some outer edges of the forest and along high-trafficked trails, a stubborn and invasive weed called herb Robert spreads efficiently and takes quickly to disturbed soils. Bikes frequently tear out native plants growing beside trails, allowing herb Robert and other invasive species to replace them.

The wide, well-trodden trails are compacted, preventing groundwater flow between different segments of the park’s broad network of wetlands.

Established trails or hiker shortcuts exist in and around wetland areas, posing threats to the ecosystem. Mountain bikers have constructed trail features out of dirt and wood throughout the park, some of which still show signs of frequent use while others are fading into the ferns.

“It‘s about getting from A to B, as opposed to recognizing that trail usage might impact the flow of water,” Grumbine said. “If bikers were ecologists, or had a better sense of the area they were considering building something in, they probably wouldn‘t build it.”

Compromising Values
The city conducted a number of surveys in 2021 to increase public participation in the planning process. Between surveys, an open house and feedback on an Engage Bellingham site, the process offered many opportunities for public comment, according to Nicole Oliver, Bellingham’s Parks and Recreation director (2).

The wildlife and ecosystem impacts from dogs, and construction of bike features caused concern for some citizens, while others expressed support for such uses.

Bikers in the Hundred Acre Wood are now required to stick to a 15-mile-an-hour speed limit on the trails. Dogs must be kept on leash at all times, to reduce disturbance of plants and wildlife in the forest and to protect pets from predators.

“Like any other social issue, you’re never going to have 100 percent buy in,” Grumbine said. “So how do you deal with the very small percentage of hikers who like to go off trail, bikers who like to go too fast or dog owners who don’t care about the rules?”

It’s going to require foresight. Grumbine likened recreation to a dependent clause in English grammar: if the forest can be preserved, recreation is possible. But if the forest is allowed to fall into disrepair and is lost, recreation will be lost, too.

City Councilmember Lisa Anderson said she feels optimistic about the city’s ability to address degradation in the park while continuing to allow dogs, bikes and other recreational use.

“I do feel that, with good stewardship, enforcement, education and environmental design of how the trails are put in, we can help mitigate some of that concern and potential damage,” Anderson said.

Phases of the Restoration Plan

• Addition of boardwalks and culverts to improve water flow.

• Rerouting, narrowing or decommissioning trails to reduce their impact on wetland ecosystems.

• Installation of wayfinding signage and trail markers to discourage use of unofficial trails.

• Transfer of the Chuckanut Community Forest conservation easement from the Park District.

• Installation of benches and amenities.

• Completion of other restoration projects proposed in the forest’s Stewardship Plan and the City’s Urban Forestry Management Plan.

What’s to Come?
The opportunities for restoration projects in the park are plentiful. However, the Parks Department has a responsibility to prioritize projects citywide, said Anderson, a member of the council’s Parks and Recreation committee.

“We have some expensive projects underway,” she said. “The Parks Department doesn’t have an endless budget to do all the work now. So, the hope is that they will work on some of the critical phasing of the wetlands and some restoration, sooner than later.”

The most urgent Hundred Acre Wood restoration should be what Grumbine describes as the “spaghetti-like” network of trails interfering with the wetland ecosystems. The city plans to improve or decommission a number of trails in the first phase of restoration priorities at the park, to take place between 2023 and 2026.

Early steps also include increasing signage for wayfinding and park rules, as well as the addition of dog waste stations.

They have until September 2023 to determine a new easement owner. Possibilities include the Whatcom Land Trust, Western Washington University, Lummi Nation, Nooksack Tribe, Northwest Indian College, The Nature Conservancy and Yellowstone to Yukon.

So the next time Frank James of the Chuckanut Community Forest Park District meets park visitors on the trails, he can tell them the tale of the Hundred Acre Wood: a land of survival despite the odds, where wetlands meet forest and baby bobcats and other wildlife can thrive.

With a conscious concern for conservation, planners say this forested wetland can be a place that is protected, preserved and enjoyed forever.

1997. Voters approve the Beyond Greenway Levy.

2001. The City of Bellingham grants a conservation easement to Whatcom Land Trust for 16.5 acres.

2005. Landowners propose Fairhaven Highlands on 85 acres at an asking price of $20.7 million.

2014. Chuckanut Community Forest Park District and the city create a conservation easement for the property.  City begins the master planning process including public involvement in the form of community surveys, submitted comments and public hearing.

2022. City publishes the Hundred Acre Wood Master Plan and petitions for the dissolution of the park district. $3.25 million Greenways Endowment Fund loan paid off in full.

Emma Bjornsrud is in her final quarter at Western Washington University studying environmental journalism. She is the current editor-in-chief for The Planet, a student-run environmental magazine. You can email her atemmab.journalism@gmail.com.