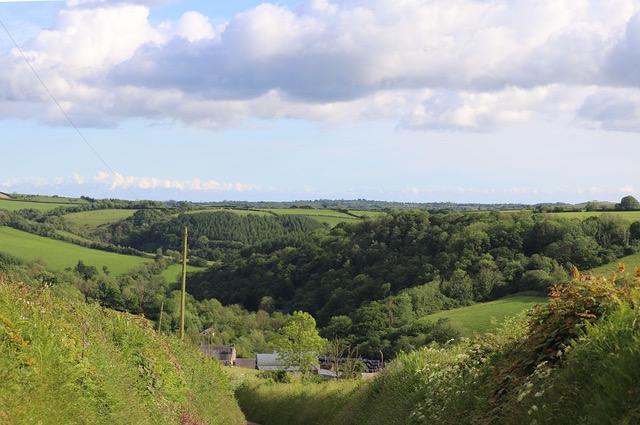 by Jean Carmean and Jayne Freudenberger

Despite attempts to convince property owners that hedgerows have myriad benefits, such as water storage, noise and wind reduction, and wildlife protection, hedgerows have not yet made a major comeback, but, led by many ecologists, that may be changing.

I remember hedgerows as a child, along property lines as fences, and along small streams. Small and medium-sized animals, birds, and insects lived in them, and they provided shade when farmers stopped harvesting or planting to take lunch breaks. Horses could stick their heads/necks out for strokes and apples as children or hikers passed by.

What exactly are hedgerows? They are lines of densely planted trees — fast-growing breeds like hawthorn, willow, chestnut, even birch. They are closely planted and woven together by bushes and blackberry vines, ivy and even many wildflowers and tall weeds growing beneath them. Farmers did think of them essentially as fences in the early 20th century. Ultimately, the order of trees and shrubs in your hedgerow depends on your choices; the key is that the variation of plant height will create a solid block or screen reaching the height of the trees you have planted.

Combat Drought and Flooding
Hedgerows ensure soils remain healthy and reduce the impacts of drought and flooding. Water runoff from fields can be a big problem on farms — during periods of heavy rainfall, a deluge can wash fertile farming soil away into rivers and seas. We have certainly seen this during our recent flooding event.

Because of their variety, each part of a hedgerow adds a different nutrient. Fields of monoculture need to be constantly fertilized — they leach their own nutrients from the soil and give up a single nutrient from a planted crop. Instead of birds and other wild creatures, single crops attract bugs, which lead to spraying for eradication. Single crops also attract animals that eat them and don’t offer homes for birds and insectivores, who would remove those pests. It might be a stretch to convince farmers these days in the era of mega crops on factory farms to create new hedgerows, but the virtue of this method is extensive in keeping the fields vibrant instead of sterile.

Yearlong Research in Britain
To prove this point, British ecologist, Rob Wolton, decided to spend a year learning about a hedgerow near his home in Devon, England. He planned to list every type of plant, animal and fungus in it. Not one, but two years later, he had found over 2,000 species.  That was 10 years ago and he is still recording new finds.

“Hedgerows are reservoirs of life,” he says … .”It’s only when you look closely that you find this extraordinary amount of stuff.”

Like all plants, the growth that makes up a hedgerow stores carbon, and the British government suspects that, since hedgerows can live so long, they could be a good way to absorb greenhouse gas emissions rather than simply planting trees.

The UK has over 500,000 km of hedgerows (compared with 400,000 km of roads), and the UK’s Committee on Climate Change has suggested that the hedgerow network be extended by 40 percent as part of the UK’s 2050 net zero target.

Of course, the UK is historically home to hedgerows even if they have been neglected recently, but what about the United States? They particularly had a role in the dust bowl era of the 1930s when they were planted as wind breaks. Is there a role for hedgerows now?

Researchers in California learned that hedgerows can be a financial boon to farmers’ crops. At first, almond growers rejected hedgerows, thinking they would attract starlings. The starlings actually preferred open treeless habitats. In fact, in a 2016 study, it was found that a 980-foot hedgerow saved $4,000 in pest control and pollination costs over seven years, repaying the cost of planting it. And, the hedgerow attracted wild bees, which made the honey bees introduced by the farmers more efficient pollinators.

Hedgerows in Whatcom County
The Whatcom Conservation District tells us hedgerows are making a comeback here in our county also. They are commonly used along waterways to improve both water quality and fish habitat. This growing appreciation for hedgerows is encouraging efforts in many areas to expand them to help provide biodiversity and combat climate change. The plants in the hedgerows are useful for carbon sequestration, which is important especially since most of us don’t have the space to plan whole forests.

Perhaps as individuals, we could give up our maintenance-intensive green lawns for something a bit wilder and more natural. This is not to say we should give up on restoring agricultural hedgerows — still, small projects would be useful, although not without pitfalls (I think of the time a black-and-white “kitty” came out of our bushes and our Siberian husky, who loved our cats, wandered up to say “hello.” (No matter what anyone says, tomato juice does not work.)

As I looked out at our small front yard on Easter morning, I watched a rabbit munching the weeds. Later, the rabbit disappeared into a wild rose/coral berry/Oregon grape/cottonwood tangle at the edge of our steep bank … our accidental hedgerow. We had tried to use traditional barriers and had even talked to a contractor about a poured concrete retaining wall, but, being both frugal and postponement prone, we did nothing after trying to block erosion with timbers and wire fencing. Nature, however, kicked in to save our home from a catastrophic slide on the edge of the railroad tracks.

Perhaps the hedgerow on your property might not have such a dramatic impact, but think of the Oregon grape and rose hips conserves, the bird and critter sightings, and the extra leisure time if you were freed from lawn mowing; all this and your own carbon sequestration project. It’s planting season — time to get going.

Jean Carmean taught at Whatcom Community College for over 30 years. Living near the beach, she has seen the changes from climate and also appreciates the role of the “accidental hedgerow” that saved their house during a mudslide.

Jayne Freudenberger is cochair of the League of Women Voters Bellingham/Whatcom County Climate Issues Committee. She has lived in Bellingham for 50 years, almost qualifying her as a native.