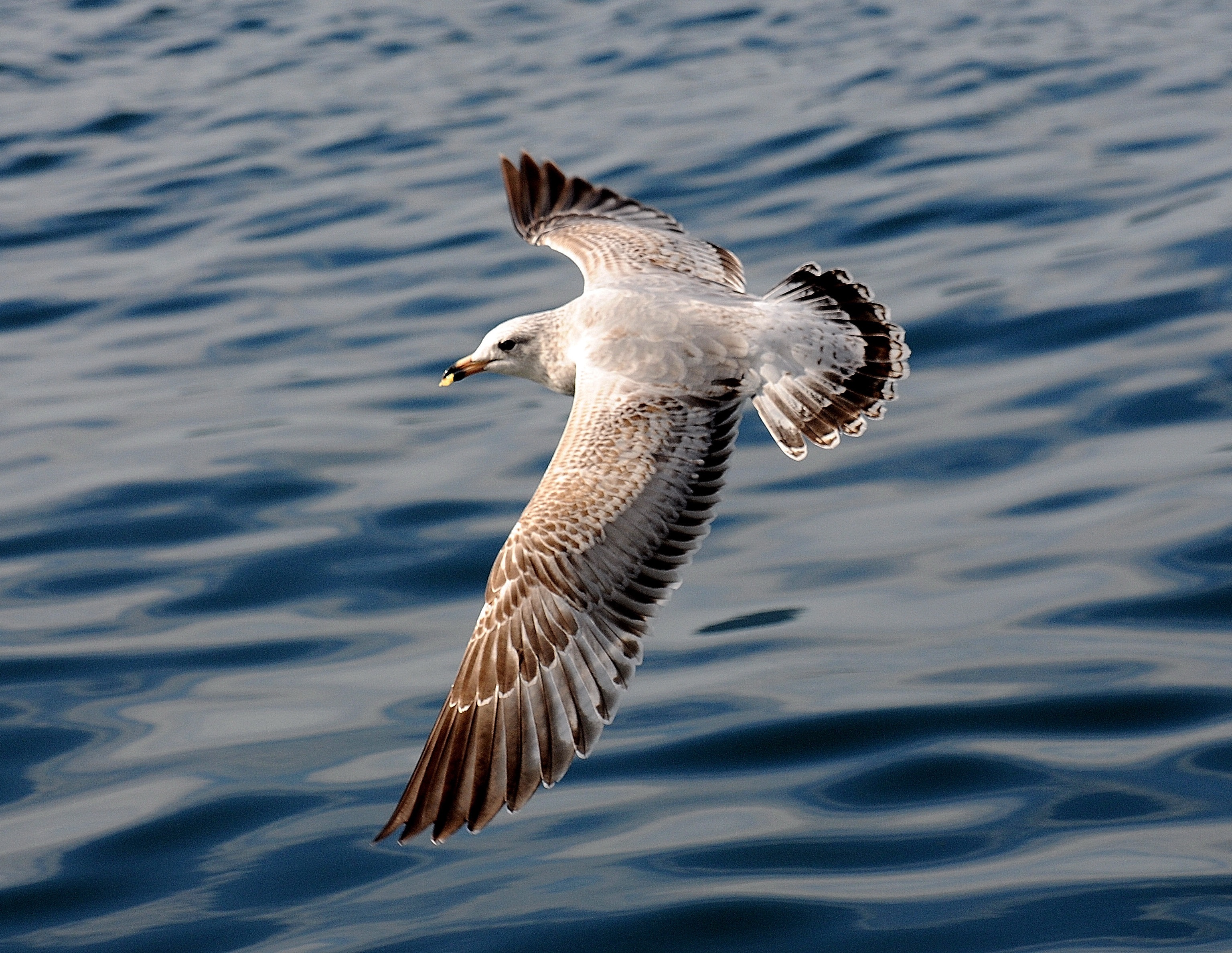 Not everyone is particularly fond of gulls, so I guess I’m an exception. While many other birds can be difficult to find, it seems that I can always find gulls to observe and study throughout the year. Gulls are some of the busiest and most visible of all our local birds. Like mallards and maybe robins, gulls are often taken for granted because they’re so common, but there’s a lot to be said for their appeal — to some of us anyway. In the warmer summer months, I often spend time in the cooler environs of Whatcom County’s extensive saltwater shorelines, observing gulls and their most interesting behavior.

Gulls are often considered seabirds and are associated with beaches and bays, prompting the frequent misnomer of seagull. In truth some gull species live on freshwater lakes, rivers, and marshes. Nonetheless, one of the most memorable sounds on just about any beach in the world, along with the relentless roar of the surf, is the familiar sound of gulls in almost constant communication with each other. They are members of the family Laridae, which includes terns and skimmers. Roger Tory Peterson placed them in his general category of aerialists, primarily because they are often seen on the wing, usually in search of food. 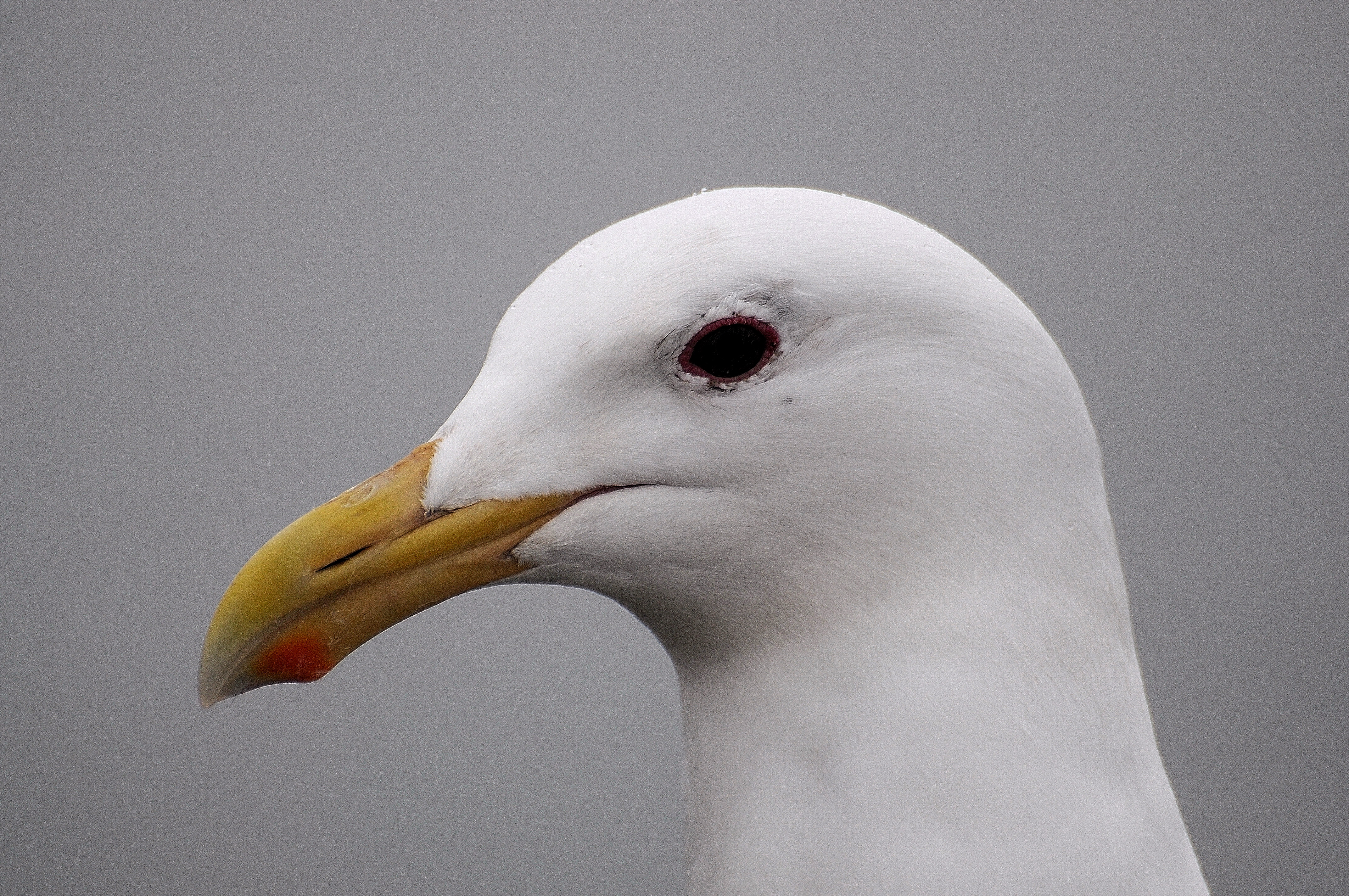 When it comes to their diets, gulls are the classic opportunists in that they will eat just about anything. I’ve personally witnessed gulls eating the eggs and young of other birds in the same nesting colonies on the breakwater at the Blaine waterfront. Gulls also display the habit of intimidating other birds and stealing their food. Gulls are no strangers to landfills and garbage dumps, as many birdwatchers are aware. Whenever a rare gull drops in, it’s not unusual for them to be found in these less-than-desirable locations.

Along with the variety of food they will eat is the versatility in the methods they use to obtain food. Gulls constantly search for food and when the circumstance presents itself, they are there to exploit whatever the opportunity might be. In their close association with humans, gulls have learned that many of us actually like to feed them. While it’s generally discouraged, some people enjoy taking a bag of stale bread or even potato chips down to the water to “feed the gulls.” I dare say that gulls would do just fine without these handouts.

As adept as gulls are at flying, they are equally comfortable walking, unlike many other seabirds whose legs are positioned farther back on their bodies to enable them to dive for prey. Gulls are not diving birds, but they can often be found feeding in association with deep diving birds. These birds occasionally force prey closer to the surface, well within reach of a shallow plunge. A unique feeding method employed by gulls is the learned habit of dropping clams and other shellfish onto hard surfaces like cobble beaches to break open the shells. One of mankind’s greatest gifts to gulls is the asphalt parking lot. When you see an array of broken clam shells on a seaside parking lot, you know that gulls are around.

The size range of gulls is considerable, from the aptly named little gull at eleven inches to the great black-backed gull at thirty inches. Despite the variation in size the body shapes are generally the same. Their moderately longer legs allow for walking along shorelines in search of food, similar to beachcombing humans. In essence, gulls are perfectly suited to just about any habitat. Along with the proper habitat, good keys in field identification often involve bill size, head and leg color, and the pattern and colors of the wings, especially the primary feathers of the wing tips. Honing your skills at field identification of gulls is an ongoing process, especially when dealing with a variety of species and the respective ages of the individuals.

Gulls are found worldwide and they breed on every continent. With the exception of a few species, they are not as common on tropical islands. Most of the species are migratory, such as a local favorite in spring and fall — the Bonaparte’s gull. One species, the Franklin’s gull, migrates from Canada to its wintering grounds in southern South America. Other species engage in shorter migrations and some simply disperse within their year-round ranges. 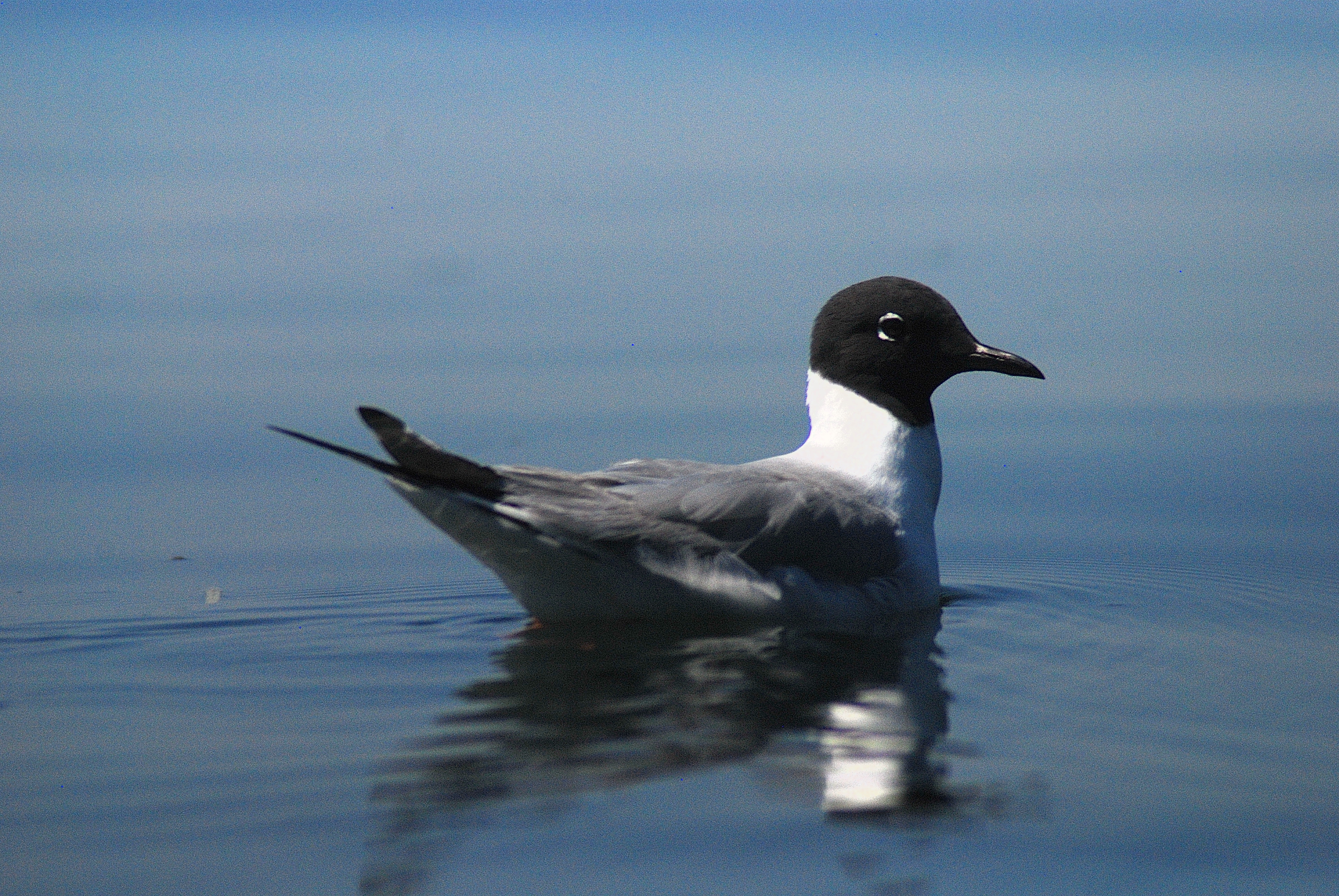 Fourteen species of gulls have been recorded in Whatcom County with the local resident glaucous-winged being the most common, as well as the most abundant throughout the year. Other gulls, such as ring-billed, mew, California, and the popular Bonaparte’s are more seasonal in the area. In spring of 1992, I had the distinct pleasure to observe and photograph a very rare migrant, the little gull. This rarity was apparently traveling with a flock of similar-sized Bonaparte’s on the way to their northern breeding grounds. 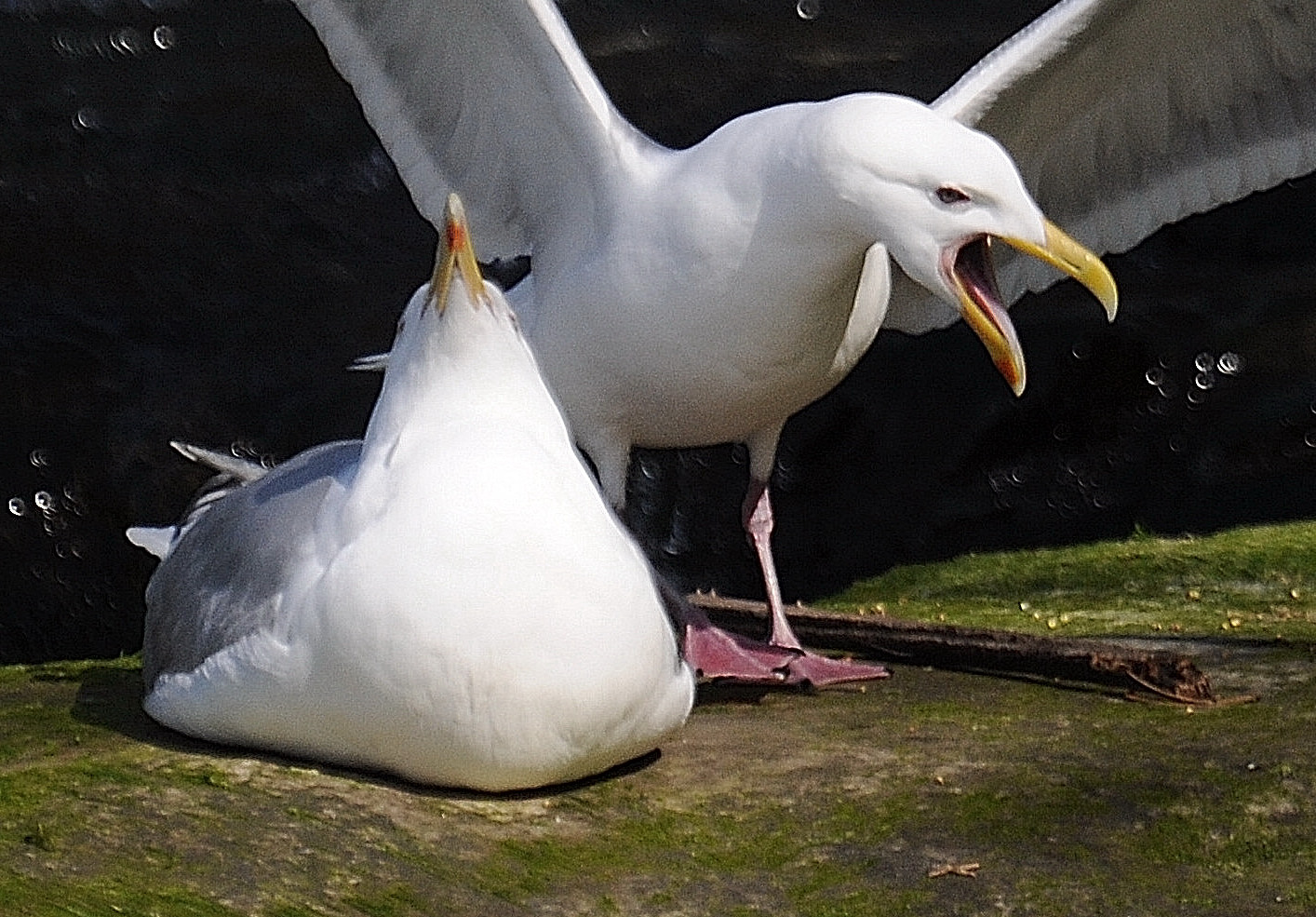 During the breeding season, we have numerous opportunities to witness how clever gulls can be at selecting appropriate nesting sites. In effect, humans have provided many suitable sites for nests, such as building rooftops and marina breakwaters. As you drive along Roeder Avenue or around the web locker buildings at the harbor, scan the rooftops for downy chicks as the summer progresses. Numerous rooftops in the downtown core also host nesting pairs and, given their location, the nests are never seen. The cornice on the west side of the old BNB building on Holly Street is a popular nesting site, as evidenced by the number of nests you can see clearly from the roof of the downtown Parkade.

I first wrote about my own affinity for gulls in this column thirteen years ago and my opinion hasn’t changed at all. They’re plentiful and always seem to be around, no matter where you are. The more you get to know the gulls, the more you’ll appreciate them. It’s sort of a variation in the old adage of a bird in the hand. If you would like a more in-depth look at gulls, read “Gulls, A Social History.” This memoir was written by Frank Graham, Jr., long-time field editor of Audubon magazine. His eloquent writing portrays gulls as attractive and remarkable. One of my favorite parts is when he points out that in the relationship between man and gulls, it is only man that has turned into a pest.

While you’re spending time observing gulls along Whatcom County shorelines, from Semiahmoo to Clayton Beach, keep an eye open for several other species that frequent many of the same habitats. Pigeon guillemots and black oystercatchers seem to be expanding their ranges northward. They frequent rocky shorelines and cliffs that provide accessibility to food sources and protection from predators. Double-crested cormorants are numerous in local waters and their avian cousins, pelagic cormorants, are well represented on or near marina breakwaters. The nesting colony of the double-crested on the Blaine harbor waterfront has been massive at times and the pelagics have started nesting on the sheer cliff faces of the Chuckanut Rocks.

If you want to stay cooler during the warm summer months, take to the shorelines and get to know the gulls and some of their counterparts. They are interesting characters, to say the least, and you just might become a fan if you give it enough time. You might see me out there, too!