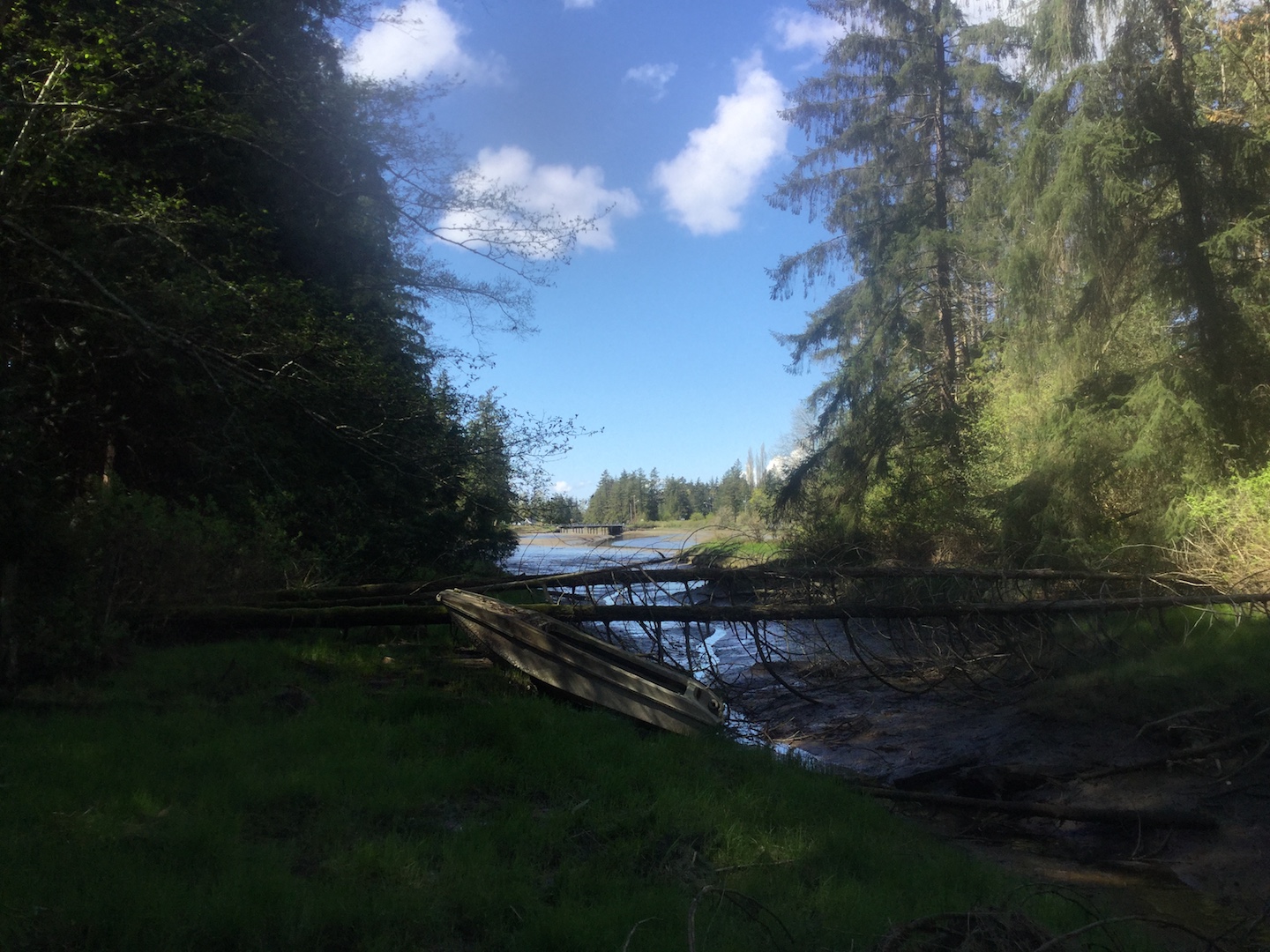 A new $915,000 grant funded by the U.S. Fish and Wildlife Coastal Wetlands Conservation Grant Program will enable further protection and recovery of water quality and habitat through the purchase of coastal wetland properties along California Creek, a tributary of Drayton Harbor in Blaine, Washington.

Whatcom Land Trust, in partnership with the Washington State Department of Ecology, received the grant in June 2020 to purchase and restore four additional properties — totaling 54.7 acres of coastal wetland habitat and 6,500 feet of shoreline — near the mouth of California Creek. The nonprofit, founded in 1984, preserves and protects wildlife habitat, scenic, agricultural and open space lands in Whatcom County for future generations by securing interests in land and promoting land stewardship.

The California Creek subbasin makes up 40 percent of the total Drayton Harbor watershed, meaning restoration will benefit water quality in Drayton Harbor and impact Whatcom County on a larger scale. In combination with the more than 50 acres of wetland habitat at the mouth of California Creek already under the protection of Whatcom Land Trust, the project will serve multiple community environmental goals while also creating a future public park.

Overcoming a History of Pollution
The year 2020 will long be remembered as the year of Covid-19 and social awakening to ongoing racial injustice. But this extraordinary year was also chosen as the deadline for one of Washington state’s most ambitious attempts at environmental recovery in the Puget Sound. It was in June 2007 that the Puget Sound Partnership’s Leadership Council met for the first time to develop the strategy to accomplish a seemingly impossible feat: restoring Puget Sound to a healthy condition by 2020. The Washington State Legislature passed a law creating the partnership that would rely on voluntary cooperation from local, state and federal agencies, tribes and residents of the entire region. The Legislature mandated that plans must address habitat and biodiversity, water quality and quantity, and human health and well-being.

It took the seven-member leadership council only a year to develop an action agenda with hundreds of improvement projects and goals that included a Puget Sound-wide recovery target of more than 10,000 net acres of year-round shellfish harvest. Drayton Harbor was just one of the waterbodies included in that enthusiastic objective.

To assess the current status and monitor progress, the council established “vital signs” as indicators of Puget Sound’s health and recovery — 25 indicators of ecosystem health that included measures of five priorities: water quantity and quality, protection and restoration of habitat, species and the food web, human health, and quality of life.

The U.S. Environmental Protection Agency subsequently developed and funded implementation strategies that were carried out by state agencies with cooperation from hundreds of partner organizations. That effort included the creation of the Northwest Straits Commission and Initiative in 1998 and in 1999 the formation of the Whatcom County Marine Resource Committee. 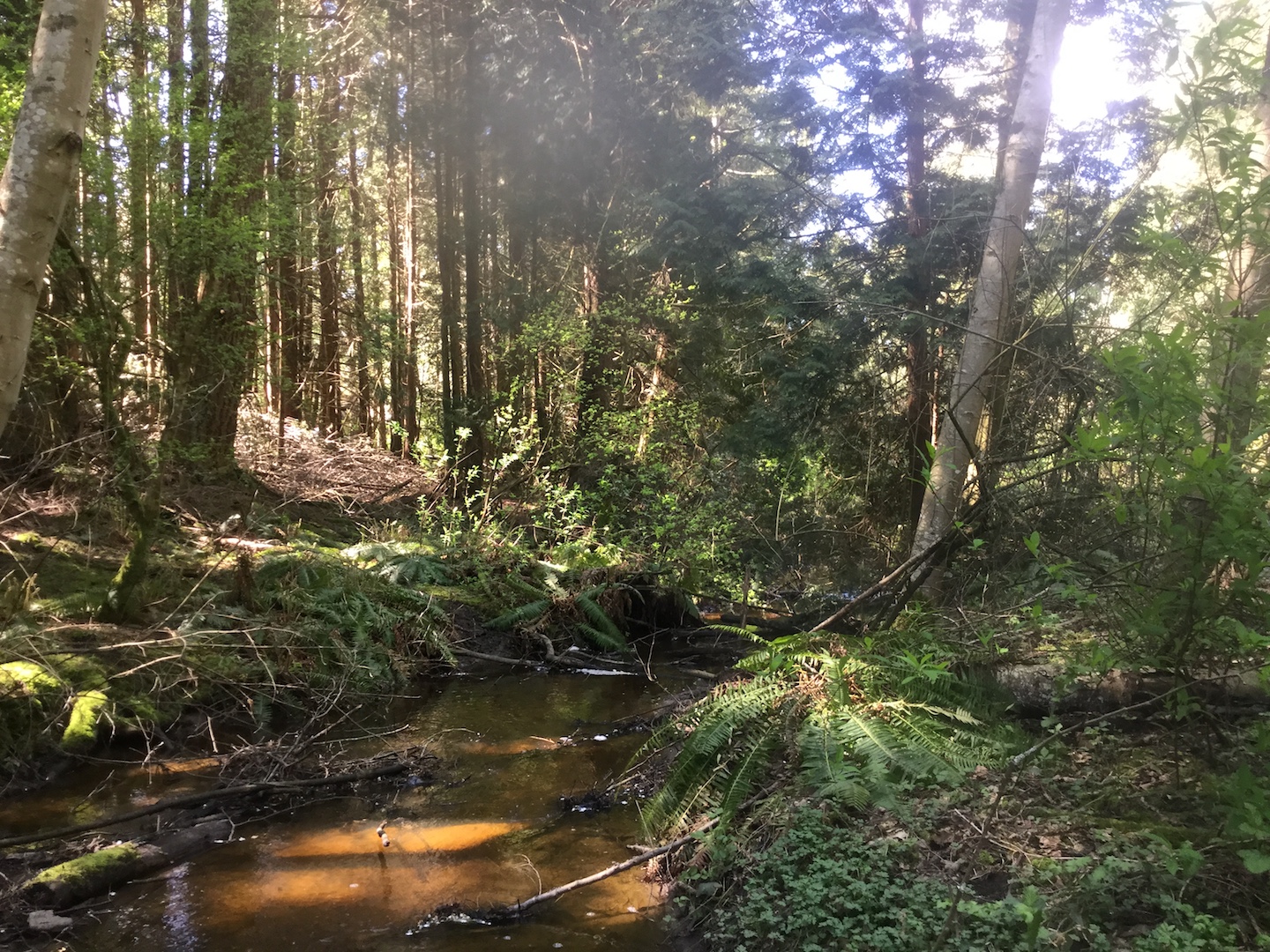 Future projects will evaluate and improve wetland and instream habitat along the California Creek estuary, while also providing an accessible trail system for community recreation and education. Photo courtesy of Whatcom Land Trust.

When this monumental effort began, Drayton Harbor was suffering from a legacy of pollution. The harbor and its main tributaries, Dakota and California creeks, were plagued by bacterial pollution that negatively impacted water and habitat quality, resulting in large-scale shellfish harvest closures as early as 1988. By 1995, shellfish harvest was prohibited in most of the harbor and the remainder was shut down to harvest in 1999.

A plethora of nearshore and upstream factors caused the bacterial pollution, including a high failure rate for aging septic and sewer systems, and poor management practices for stormwater, livestock and human waste in marinas.

An extensive effort of point and nonpoint source identification, changes in state and local public policy and improvement of septic systems and sewage treatment over the past decade have significantly improved the bacterial pollution.

A positive hint that Washington state and Drayton Harbor might meet their environmental recovery goals by 2020: in 2017, year-round commercial oyster harvest resumed for the first time in 22 years. But that hard-fought recovery effort remains vulnerable and in need of long-term protection and stewardship. 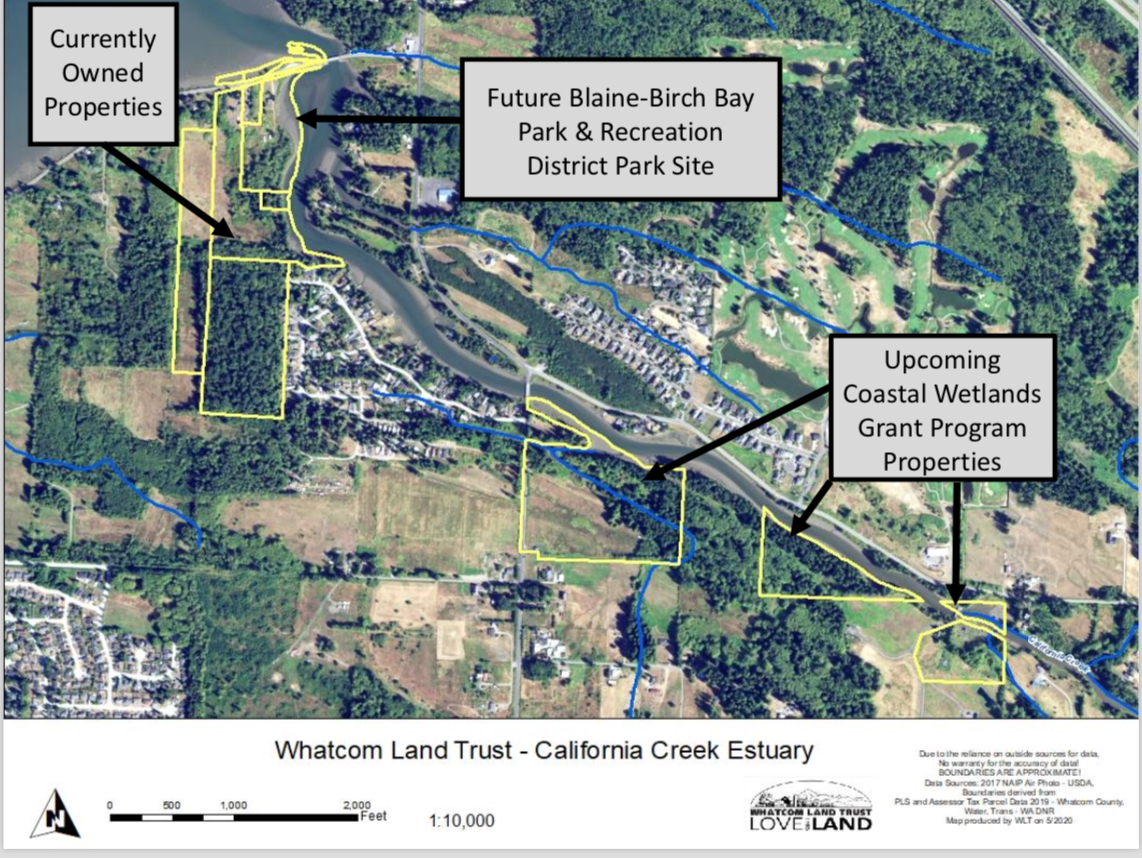 Four Additional Properties
Whatcom Land Trust invested in this community conservation effort in June 2017 and December 2018 by purchasing two parcels totaling 52.5 acres at the mouth of California Creek where it empties into Drayton Harbor. Their location and ecological makeup make them invaluable in the long-term recovery and ecological stability of the area.

Since their purchase, the Land Trust has completed significant salmon habitat restoration and invasive species removal, as well as demolition and removal of two barns by Moceri Construction. This important work was done in partnership with Nooksack Salmon Enhancement Association and Whatcom Conservation District, in part, thanks to a grant from the Rose Foundation’s Puget Sound Stewardship and Mitigation Fund and the U.S. Department of Agriculture’s Natural Resources Conservation Service funding. The Land Trust continues to partner with Washington Sea Grant in monitoring the invasive European green crab’s presence in the California Creek estuary.

Concurrent with these efforts, the Blaine/Birch Bay Parks and Recreation District #2 (BBPRD2) applied for and won two grants totaling $757,000 from the Washington State Recreation and Conservation Office in order to convert approximately 12.5 acres of the two Land Trust properties into the new California Creek Estuary Park.

“This partnership with the Whatcom Land Trust has given an opportunity to the Blaine-Birch Bay Park and Recreation District to preserve this estuary and provide recreational opportunities for Whatcom County residents and visitors,” explains BBPRD2 Director Ted Morris, who also serves as Whatcom Land Trust’s Volunteer Coordinator. “Thanks to our local Representatives Sharon Shewmake and Luanne Van Werven for help in securing a grant from the Recreation Conservation Office for this project. With hopes to open in 2023, this day-use park will have a parking lot, restroom, kayak launch and hiking/biking trails. It will also serve as a trailhead for the district’s Bay to Bay Trail from Birch Bay to Blaine …” The new trail will eventually link Birch Bay State Park and Peace Arch Park. 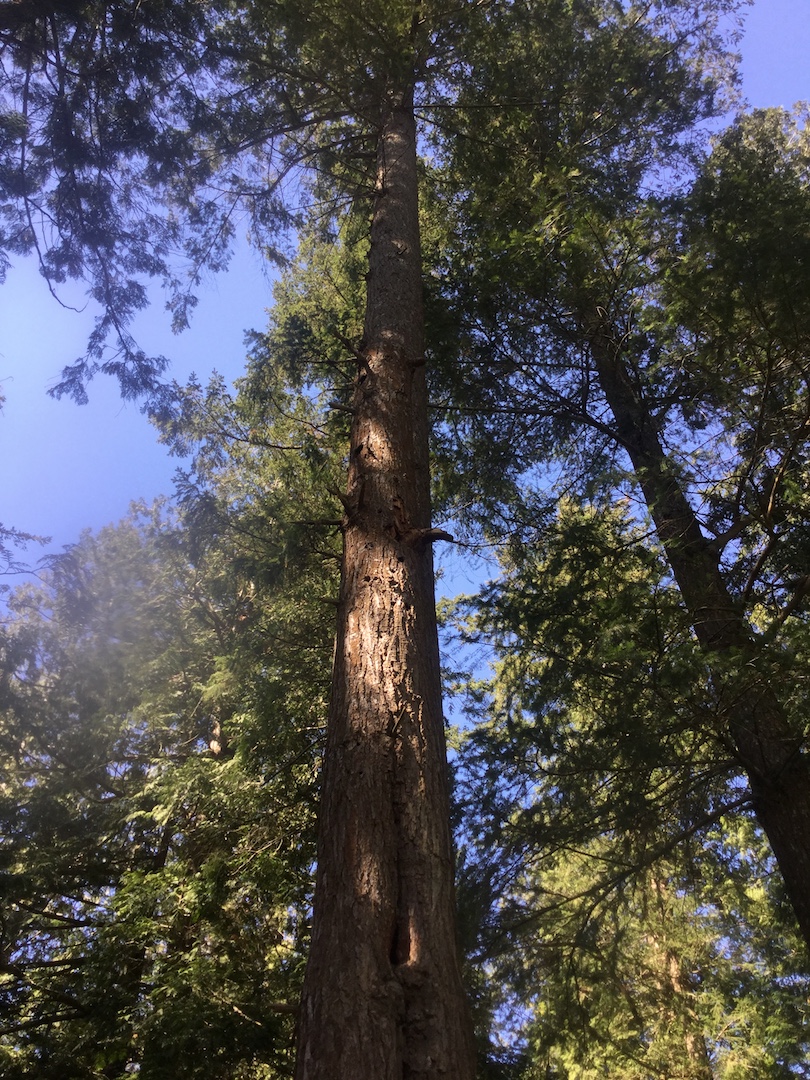 Four additional individually owned and unconnected parcels within 1.5 miles of the mouth of California Creek, on the south side of the creek upstream from Hillsdale Cemetery, will be purchased with Coastal Wetland Program grant funds. The purchase includes 55 acres and 6,500 feet of creek-front property, as well as tidal wetlands that the Land Trust plans to restore. The trust has worked for months to reach sale and conservation easement agreements with each owner.

“We are sincerely grateful to the U.S. Fish and Wildlife Service’s Coastal Wetlands Program, the Department of Ecology and our many supporters for making this land purchase possible,” notes Gabe Epperson, executive director of Whatcom Land Trust. “These purchases will double the wetland and shoreline habitat we’re able to protect in this area for salmon and other wildlife, for recreation and for the community in perpetuity.” 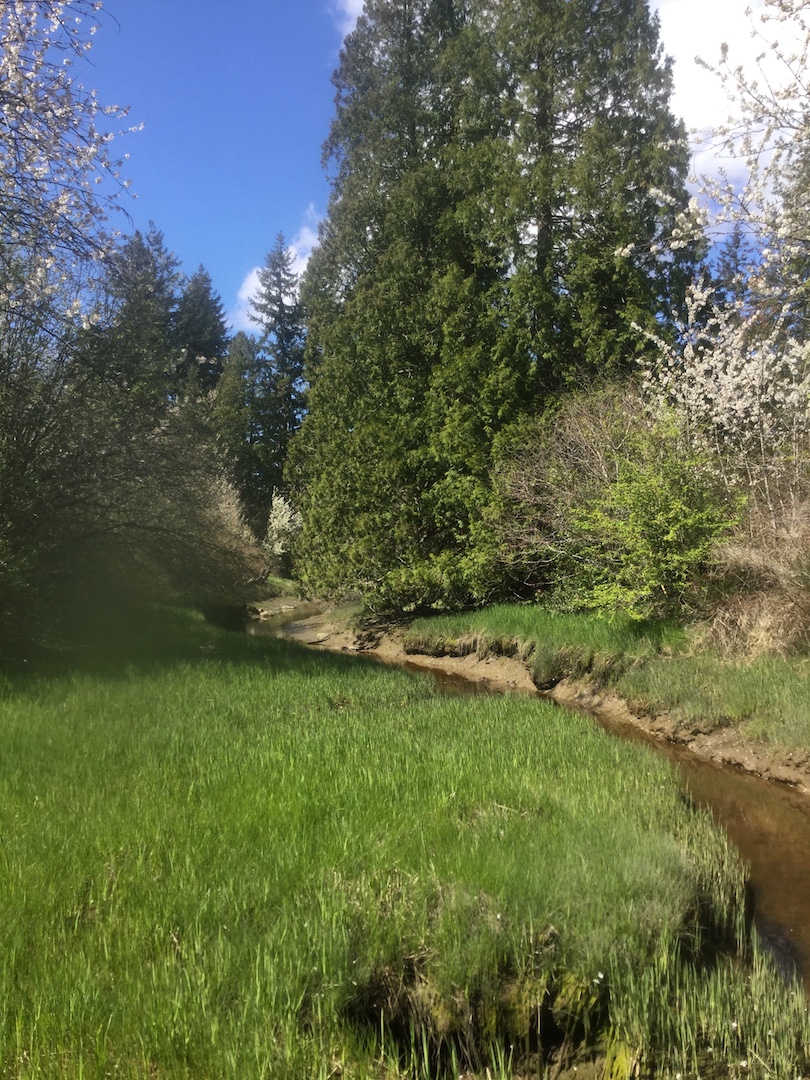 Future work parties will include planting native vegetation along sections of California Creek that will shade and cool the waters, improving the habitat quality for fish, birds and other wildlife. Photo courtesy of Whatcom Land Trust.

Approximately $1.3 million will be spent on restoration efforts on the four parcels. That effort will include removal of two old buildings, planting native wetland plants, and restoring some fields (that have been filled) back to wetlands and tidal channels.

As grants provide up to 75 percent of the cost of wetland acquisition and protection, additional funds from the trust and the community will help complete the project.

Whatcom Land Trust is just one of seven Washington state projects that received a total of $5 million from the Coastal Wetlands Program to restore and enhance nearly 500 acres of coastal wetlands and 17,500 feet of marine shoreline in Jefferson, Kitsap, Snohomish, Thurston, and Whatcom counties. The seven statewide projects were among 23 approved nationwide, totaling $17 million.

Protecting Wetlands
Wetlands can be among the most complex, productive ecosystems in the world, rivaling the planet’s rain forests and coral reefs. Coastal wetlands include estuarine salt marshes as well as freshwater wetlands that extend inland within a watershed. These areas are an irreplaceable natural resource that provides invaluable benefits to humans and wildlife.

The mudflats and tidal marshes along California Creek provide critical habitat to breeding, migrating and rearing salmonid species. These wetlands fall within a regionally significant area for birds, providing foraging and rearing habitat for a diversity of coastal-dependent and migratory shorebirds, waterfowl and passerine species, including black oystercatchers, greater yellowlegs and red-necked grebes.

The Coastal Wetlands Conservation Grant Program favors wetlands of rare types within an ecoregion, including specially recognized wetland functions — especially like those in Drayton Harbor that are in decline or threatened with destruction.

Once the additional 55 acres of coastal wetland habitat are purchased, Whatcom Land Trust will develop a required Stewardship Plan that will detail restoration efforts and permanent protections. When it is safe to invite the public, Whatcom Land Trust will host stewardship work party opportunities to move the plan forward. Volunteer opportunities will be shared on the Land Trust’s website (whatcomlandtrust.org), on social media accounts and in upcoming e-newsletters.

“This project is a win for the interdependent species that will benefit from improved habitat, it’s a win for the Blaine-Birch Bay community that will benefit from improved water quality and a new public park, and it’s a win for all of Whatcom County, whose generous ongoing support helps us qualify for land purchase grants like this,” adds Epperson. “This beautiful and ecologically important place where people connect with nature is now permanently protected for future generations of Whatcom County residents and visitors.”

Lorraine Wilde is owner of the public relations company Wilde World Communications and has lived in Whatcom County for more than 25 years. She has published more than 250 articles and blogs nationally, helping small businesses and organizations spread positive messages. She earned her master’s degree in Environmental Science from Western Washington University’s Huxley College of the Environment and cares deeply about this place she calls home.