Glacial Losses During a Year of Extremes 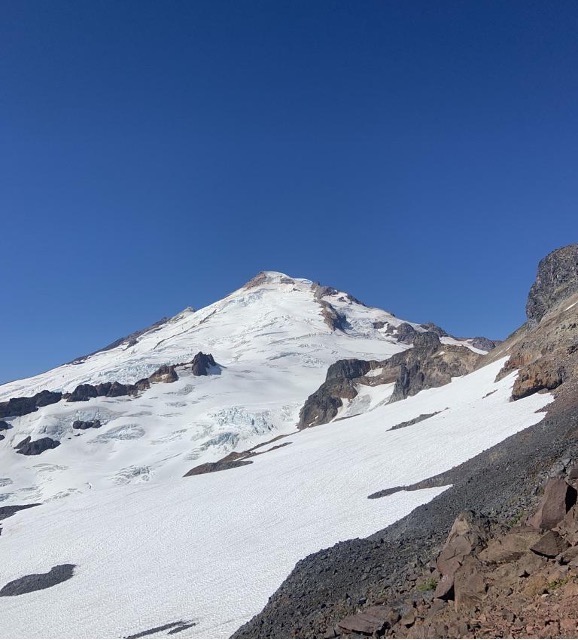 A view of the summit of Mount Baker from the Portals in August 2021.
photo: Sally Vaux

If you spent time in the Pacific Northwest this past summer, you probably noticed Mount Baker looked vastly different from its typical snow-capped state. Instead of a bright shroud of snow, thick bands of dark rock were visibly exposed near the peak.

In many ways, this year in the Pacific Northwest stood out from past years of recent memory due to extreme climatic events. In late June, the region experienced a record-breaking heatwave, with temperatures in Bellingham reaching well into the 90-degree range (1). Thousands of Chinook salmon died in the South Fork of the Nooksack River before they could spawn in September due to high water temperatures and low water flow (2). After another summer of wildfires, record-breaking floods inundated the region in November (3).

The summer of 2021 was unprecedented for Western Washington. Climate scientists warn, however, that the type and severity of heat waves that affected the region will become increasingly more common in the coming years (4). These climate projections are catastrophic for the region’s glaciers. Glaciers act as natural reservoirs that supply meltwater to the lowlands of the region for irrigation, power generation, salmon runs, drinking water, tribal cultural resources, and more (5). Since 1983, Dr. Mauri Pelto has been monitoring their steady decline and disappearance.

The North Cascades Glacier Climate Project
Pelto, a professor of environmental science, glaciologist, and the vice president for Academic Affairs at Nichols College, has dedicated the last 38 summers to surveying prominent glaciers in the Cascades. The project, which he founded as a graduate student, monitors the mass balance and behavior of more glaciers in North America than any other program of its kind (6). When Pelto started the project, there were 780 glaciers in the Cascades, and now, 600 are left (7). All of the remaining glaciers he monitors are retreating. He estimates that, overall, the glaciers have cumulatively lost about 30 percent of their total volume since he began the project (8).

Much can be learned about regional climate change both directly and indirectly from documenting glacier retreat. Broadly, glaciers are important and sensitive indicators of climate change, and changes to glaciers due to rising air temperatures can point to other differences in ecosystems. While it is easier to visually observe glacier recession, Pelto explains that, from these changes, we can tell that alpine meadows, alpine lakes, and forests are changing, too. To document how the glaciers are changing directly, Pelto and his team monitor glacier mass balance, terminus behavior, and runoff each year.

To measure terminus behavior each year, the team uses GPS to record the distance from the endpoint of the glacier to a fixed benchmark beyond the glacier (10). Glacier runoff, which supplies the region with an estimated 230 billion gallons of water during the summer, is especially important because it supplies cool water during summer low-flows downstream (11). 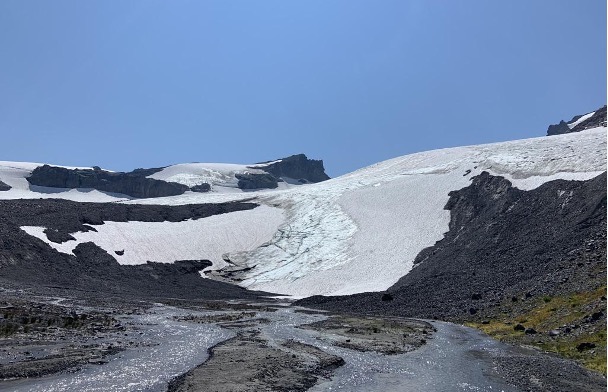 The terminus of the Sholes Glacier has declined 170 meters since 1990.
Photo by Sally Vaux (August 2021)

The Sholes Glacier, which is on the northeast side of Mount Baker, is critical for life in Whatcom County. Runoff from the glacier flows into the North Fork of the Nooksack River, which is crucial habitat for salmon. From 1990 to 2021, Pelto has observed the Sholes Glacier to have retreated 170 meters and lost between 25 and 30 percent of its total volume (12). In the last eight years, glacier retreat has been increasingly rapid, and the largest glacier mass losses were observed in 2015 and 2021 (13). As the Sholes Glacier continues to trend in this direction, glacier runoff will decline and stream temperatures in the North Fork of the Nooksack River will increase, which will have catastrophic effects on fish populations (14).

On the south side of Mount Baker lies the Easton Glacier, a vast expanse of snow and ice from which runoff flows into the Skagit River. Pelto estimates that the glacier has retreated 440 meters at its terminus from 1990 to 2021 (15). The impacts of the heatwaves this summer on the Easton Glacier were drastic, as Pelto observed the lowest percentage of snow cover of any year from 1990 to 2021 (16). On the hike into the glacier, the team also noted stunted alpine vegetation growth (17). 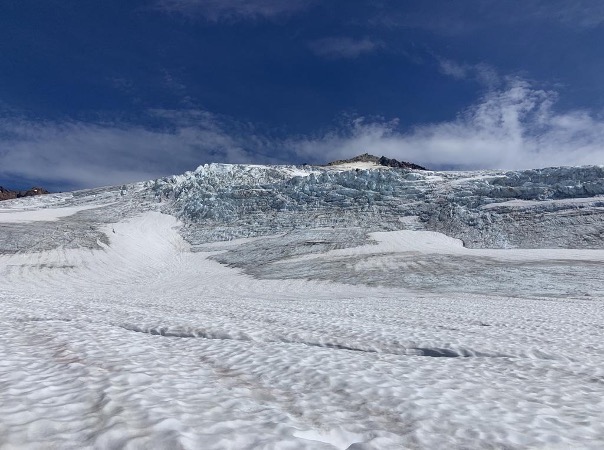 Exposed icefall on the Easton Glacier. Above the icefall is exposed rock near the summit of Mount Baker.
Photo by Sally Vaux (August 2021)

Climate Project Partnerships
Each year, Pelto recruits artists and early career scientists to join the project’s monitoring effort. In addition, the North Cascades Glacier Climate Project partners with the Nooksack Indian Tribe and Dr. Alia Khan’s Cryosphere Studies and Aquatic Biogeochemistry Lab at Western Washington University. Khan focuses the studies of her lab on the role of light-absorbing particle deposition on snow and ice surfaces in mountainous and polar regions. To do so, Khan studies albedo, a property that describes how well snow and ice surfaces reflect incoming solar radiation (18).

Albedo can be thought of much in the same way as wearing a white shirt versus wearing a black shirt on a hot summer day. As snow and ice surfaces become darker due to the presence of debris, exposed rocks, and deposits of light-absorbing aerosols, like black carbon released from wildfires and snow algae, the surface albedo is reduced, and more solar radiation is absorbed (19). As more solar radiation is absorbed, snow and ice melt increases, triggering a positive feedback loop that is ultimately contributing to the general decline of glaciers and snowpacks (20).

Khan explains that because of the complexity of climate change in the Pacific Northwest, collaboration and long-term datasets such as those produced by the North Cascades Glacier Climate Project are essential. She describes climate change research as “inherently interdisciplinary.” To understand the complicated impacts of climate change, Khan states that community and cross-disciplinary partnerships are vital.

Mitigating the Advance of Climate Change
This past summer, I was fortunate enough to work with Pelto and a team of mostly early-career women scientists to carry out the monitoring project on eight glaciers in the Cascades. I am from Western Washington, but this was my first time ever stepping foot on a glacier. Over the two and a half weeks we were in the field, I was consistently in awe of our surroundings. It was quite a sobering experience when I learned that many of the glaciers we surveyed this summer will be gone by the end of the century.

Pelto describes the glaciers in the Cascades as part of our backyard and a key part of the ecosystem that we live in. Explaining one reason why their decline is so consequential, he says, “When the glaciers leave, a lot of other organisms in the ecosystem depend on them, and we can’t just rebuild them. It’s irreversible.” To build watershed resilience to climate change locally and mitigate impacts from warming, continued monitoring and collaboration between tribes, scientists, local and state governments, and community organizations is crucial and more important than ever.

Sally Vaux is a graduate student of environmental sciences at Western Washington University. Her research interests include snow and ice albedo, the impacts of aerosol deposition and climate change on the cryosphere, and equitable K-12 science education. She was a 2021 North Cascades Glacier Climate Project field assistant.