From the South Sound to Bellingham 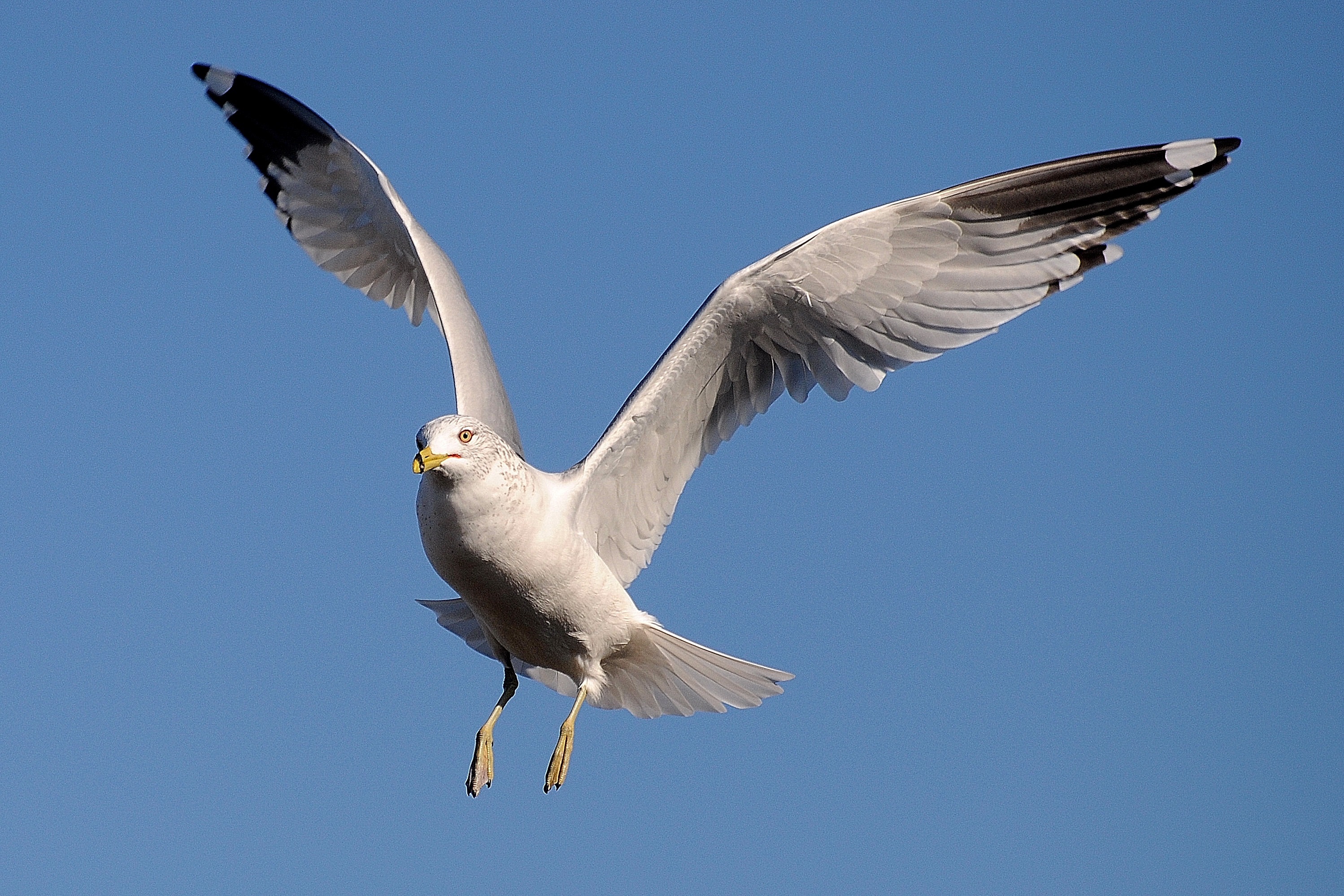 We took a long weekend recently to meet with my sister and nephew in Gig Harbor and as we started making plans, my mind started thinking about birds … of course. With time of the essence, we decided to bite the proverbial bullet and take on the usual chaos of the I-5 corridor and the Everett/Seattle/Tacoma raceway. I find that it’s good to make this trip every now and then to be thankful that I don’t have to do it every day. My heart goes out to commuters everywhere who have to deal with this madness. Too many people and too many cars, but I digress.

Since this trip was going to be my first visit to Gig Harbor in the 42 years that I’ve lived in the Northwest, I had new territory to research and explore. Regardless of the fun we would have in Gig Harbor, the best part of the weekend plan was to meander home via the back roads of the Kitsap and Olympic peninsulas, making our way to the ferry at Port Townsend.

If you look at a Washington state map, you’ll see that Puget Sound is a fairly open waterway until you reach Vashon Island, south of Seattle. After Vashon the south sound becomes a myriad of bays, inlets, and islands all the way down to Olympia at the foot of Budd Inlet. In many respects, these protected waters have tremendous potential for any number of recreational pursuits and the birding follows the seasons. The biologically-rich waters provide perfect resting and foraging areas for resident and migratory birds.

After we left the busy interstate, we crossed the Tacoma Narrows on the bridge that replaced Galloping Gertie, the infamous span that everyone has seen in old newsreels. Gertie was opened to traffic on July 1, 1940, and collapsed on November 7 of the same year. The nickname of the bridge came during construction when the road deck vibrated during windy conditions. Despite measures to dampen the effect, the bridge collapsed in 40 mile per hour winds. The collapse boosted the science and engineering of bridge design in many textbooks. The current bridge is quite substantial so there shouldn’t be a galloping repeat.

We met with relatives across the peninsula from Gig Harbor and settled into a reunion weekend on Wollochet Bay, which flows into Hale Passage and eventually the Tacoma Narrows. Again, the connecting waterways are particular to the south sound and its maze of hidden jewels, most of which are densely populated. Knowing that we arrived during a slow time of year for birds, we unloaded the kayaks and explored the new environs just the same. Between great meals and conversation, we spent two days of exploring, kayaking as far as the Narrows where we saw a few of the usual suspects like kingfishers, Caspian terns, cormorants, and three species of gulls. Regardless, the weather was magnificent so no one was heard to complain. 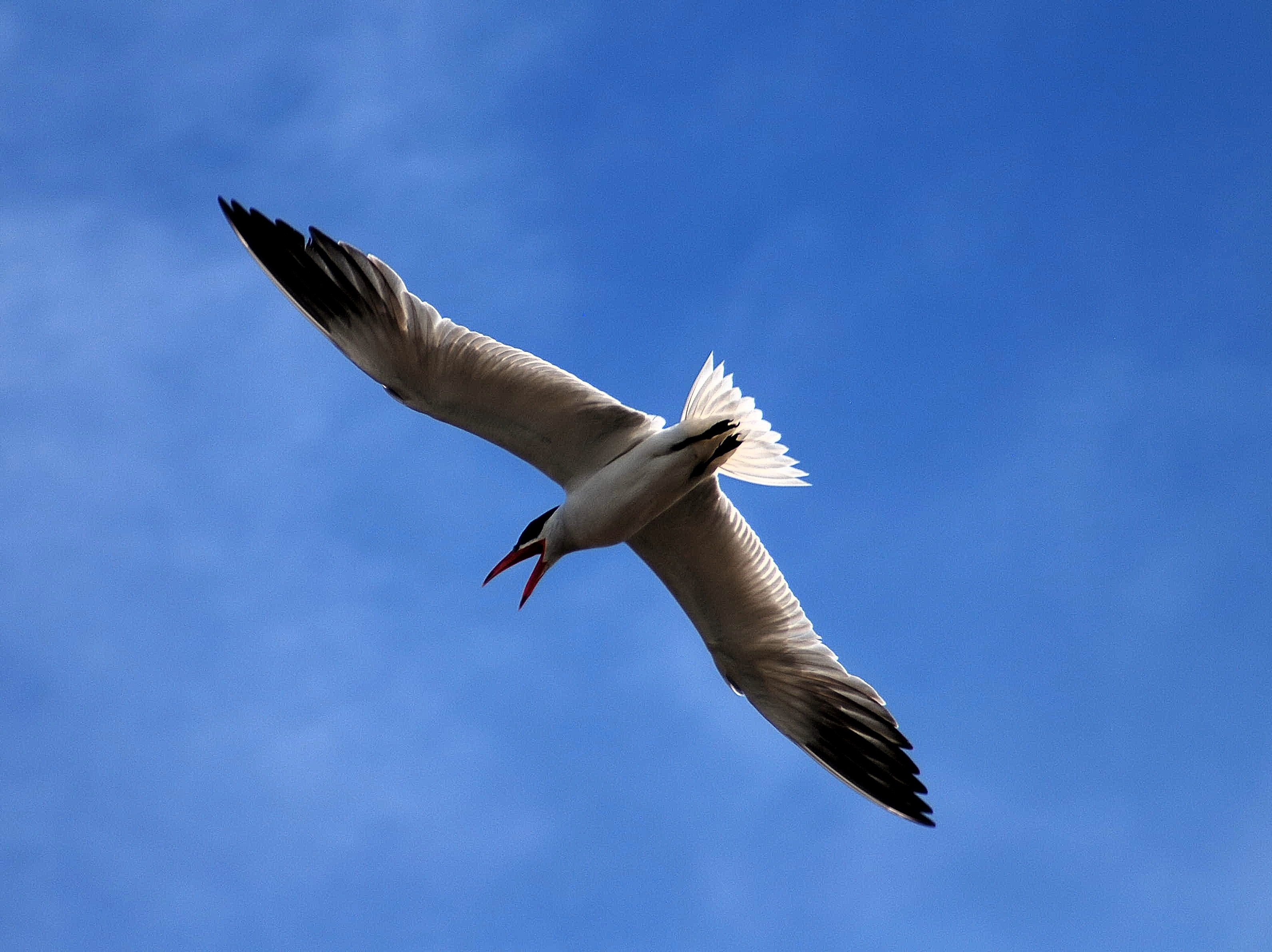 From a certain point in Gig Harbor on a clear day, you can see one of the most iconic views of Mount Rainier. It wasn’t to be on this trip, however, due to the mountain’s cloud cover. It was still a joy to experience the town’s historic connection with water. A trip highlight for me came on the second day when we set out to explore one of Puget Sound’s delightful waterfront communities on foot. The setting was pleasant enough, but it was the sound of numerous Caspian terns that caught my ear as soon as I stepped out of the car. Everyone lost track of me when I headed to the source of the music. I located a very busy flock of almost 200 terns resting and commingling atop one of the boat sheds. Terns of all ages were apparently gathering prior to migration.

After two full days of reuniting and exploring, we were back on the road and heading home. We left early enough to begin checking off all the places we wanted to visit on the way. After spending quality time in Gig Harbor, we were eager to have breakfast in Poulsbo. Like a few other communities in Washington, Poulsbo has adopted a theme that connects with its heritage. Winthrop’s western theme was a natural segue into the character of north central Washington while Leavenworth capitalized on its scenic location to offer a Bavarian theme. Poulsbo has done a great job of recreating a bit of Norway with its architecture and meandering main street nestled on the shoreline of Liberty Bay. Once again, the seasonal transition offered a scant few species, but a few diving terns and prowling great blue herons were entertaining, enough for a quick stop on our leisurely way home.

A bit farther up the road we crossed the Hood Canal floating bridge. Like Galloping Gertie, this structure has its own weather-related history. During the night of February 13, 1979, the bridge was battered by sustained winds of 85 mph with gusts as high as 120. It finally succumbed during the early morning hours when the western draw span and pontoons broke loose from the main structure and sank. Both of these engineering failures are classic examples of the raw power of nature.

Our next stop was Port Townsend (PT), which stands out as one of Puget Sound’s premier waterfront towns and embraces its own maritime history. If you have time between ferries, the main street in PT offers a great opportunity to walk all the way to the Point Hudson Marina, where there are usually good birds. On previous trips, I’ve observed good numbers of waterfowl and shorebirds, including whimbrels, dunlin, and sanderlings. With the open expanse of Admiralty Inlet, you can see the next ferry coming in plenty of time to get back to your vehicle.

Unless the weather is absolutely foul, I always head for the ferry’s upper deck on the crossing to Keystone. Though the main reason for being on the upper level is to see more birds, this viewpoint offers a grand perspective of this part of Washington, including views of the entire range of the North Cascades from Mt. Baker to Mt. Rainier. The passage over the active inlet that connects Puget Sound with the Strait of Juan de Fuca provides unique opportunities to bolster your birding life list with less common species. A good checklist for this crossing includes common murres, rhinoceros auklets, pigeon guillemots, marbled and ancient murrelets, and a variety of gulls and other seabirds.

In previous columns, I’ve pointed to the area around the Keystone ferry landing as one of the best birding spots on Whidbey Island. The roadway that serves the ferry landing bisects grassland that is sandwiched between fresh and saltwater habitats. On the fresh water side is the expanse of Crockett Lake, which is a haven for a variety of birds including raptors, migratory shorebirds, and wading birds like great blue herons. On the opposite side are picnic stops with expansive saltwater views.

Coupeville is another of my personal Top Ten Washington state waterfronts. A comfortable main street winds along the shoreline of Penn Cove and has shops and restaurants to suit every need. During the nesting season Coupeville has numerous pigeon guillemots plying the waters of the cove. A short walk on the public pier offers better views of birds and great views of Mount Baker.

Closer to home, Deception Pass State Park offered an opportunity to take a break from the road so we checked out the area of West Beach and Cranberry Lake. The rocks at the entrance to Deception Pass often provide a perfect high-tide roost for two species of cormorants, black oystercatchers and seasonal flocks of Heermann’s gulls. These unique, orange-billed gulls make stops here on both north and southbound migrations. This is a perfect destination for a day trip throughout the year.

After an interesting and somewhat tiring day on the road we felt at home immediately after turning onto Chuckanut Drive from Hwy. 20. This scenic drive always presents a restful reentry into Whatcom County. I often wonder how spoiled we might be in Washington to have such a trove of scenic delights in just about any direction we travel. The freeways serve a sometimes useful purpose but the real beauty is on the back roads. I guess I’ve always been a fan of William Least Heat Moon’s concept of “Blue Highways.”
_____________________________