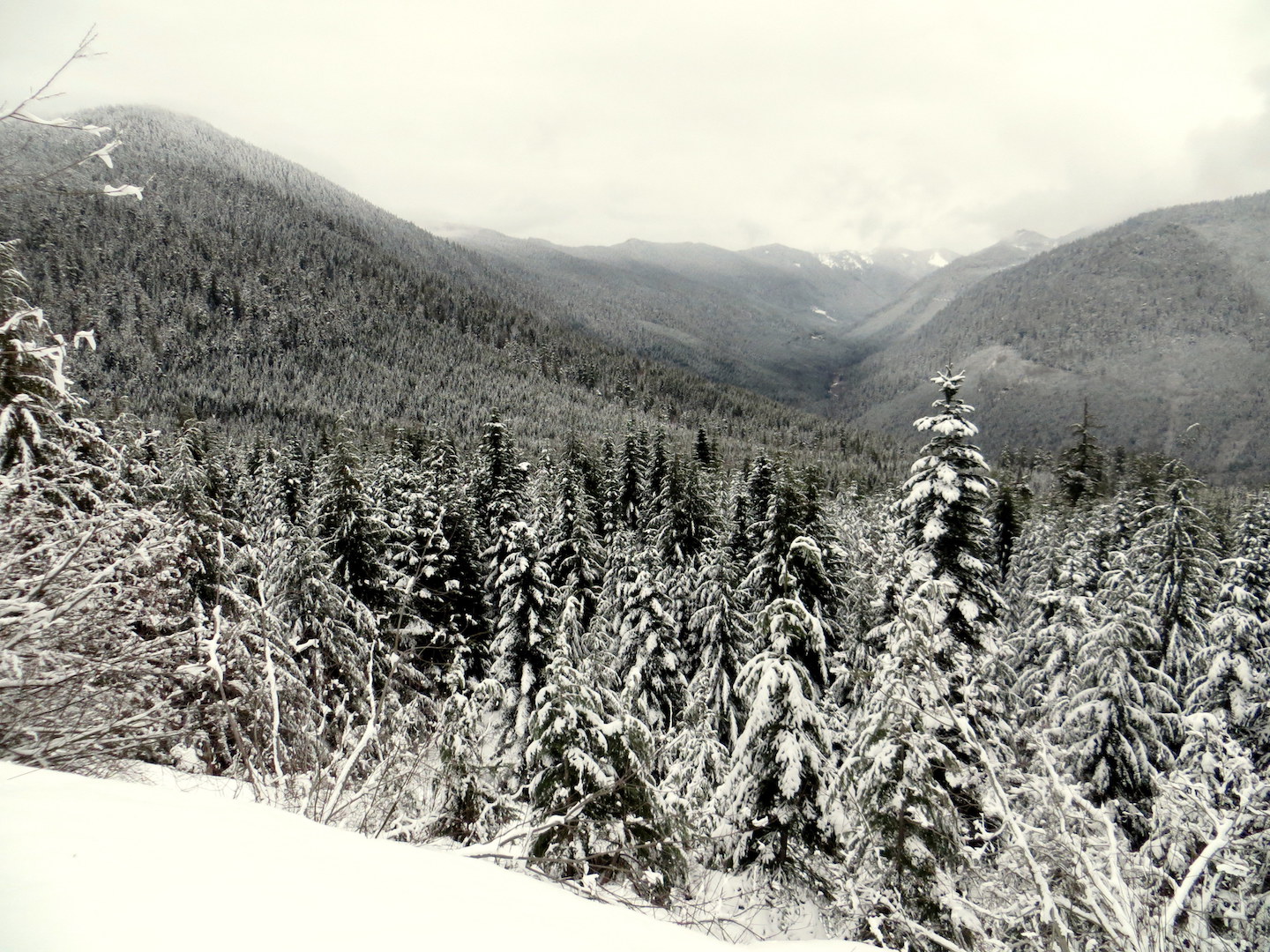 Canyon Creek valley, a major tributary of the North Fork Nooksack, will see intensive logging in the foreground and across most of the lower slopes beyond.
photo: Jim Scarborough

Editor’s Note: This article originally appeared in the Fall 2021 issue of The Wild Cascades; published by the North Cascades Conservation Council. The council was formed in 1957, “To protect and preserve the North Cascades scenic, scientific, recreational, educational and wilderness values.” It is probably best known for the campaign to create the North Cascades National Park, and it has also been involved in campaigns to create the Glacier Peak Wilderness, W.O. Douglas Wilderness south of the Alpine Lakes Wilderness, the Henry M. Jackson Wilderness, the Chelan-Sawtooth Wilderness, the Wild Sky Wilderness and others. Among its most dramatic victories has been working with British Columbia allies to block the raising of Ross Dam. Whatcom Watch asked Conservation Northwest and RE Sources to comment on the allegations in the article. RE Sources felt the response from Conservation Northwest was sufficient. The headquarters for Conservation Northwest is currently located in Seattle — it was initially established in Bellingham in 1989 as the Greater Ecosystem Alliance, changed its name to Northwest Ecosystem Alliance and in 2005 to Conservation Northwest. RE Sources is located in Bellingham — it started in 1982 as Bellingham Community Recycling, changed its name to Environmental Resources Services and is now known as RE Sources.

Update: Due to all of the road damage associated with the recent pineapple express, the Forest Service has temporarily withdrawn its decision notice and “finding of no significant impact” for the Nooksack logging project.

In late September, the U.S. Forest Service published its final environmental assessment and “finding of no significant impact” for the North Fork Nooksack Vegetation Management Project. As described previously in The Wild Cascades, the newsletter of the North Cascades Conservation Council, this benign-sounding endeavor is in fact a major ramping up of logging activity on the Mount Baker-Snoqualmie National Forest. It will amount to just shy of 3,000 acres of new clearcutting and commercial thinning on a heavily visited swath of public land, with national park-caliber scenery and a suite of irreplaceable ecosystem services. Expect these attributes to suffer terribly in the 10-to-15-year implementation window for this project, and for years afterward as the wounds slowly heal.

Unfortunately, where the North Cascades Conservation Council sees a prime area for carbon sequestration, clean and abundant water, habitat for rare and sensitive species, and an exceptional resource for compatible recreation in perpetuity, a revanchist Forest Service sees sawlogs for Sierra Pacific Industries, a California-based lumber producer. In recent years, the Forest Service has developed a talent for euphemism; for instance, deploying terminology such as “variable retention harvest” as a substitute for clearcutting. But, it has long had a penchant for marking its territory. At one time, the agency delighted in punching in new clearcuts hard against the boundary lines of Mount Rainier and Olympic national parks. Soon, bulldozers and chainsaws will be unleashed below Mount Baker in an area that residents up and down the I-5 corridor never thought they’d see logged again.

Few federal agencies are as antiquated as the Forest Service. In the Pacific Northwest, the agency succeeded in laying mostly dormant subsequent to the fallout from listings of the northern spotted owl, marbled murrelet, and multiple salmon/steelhead runs under the Endangered Species Act — all due in large part to earlier Forest Service mismanagement. Patient as a snake in the grass, the agency waited for better political weather. A business-friendly Bush administration, an indifferent Obama administration, a belligerently extractive Trump administration, and a Biden administration with far too much on its plate, combined with a rightward lurch in the federal judiciary, together have encouraged the serpent to boldly slither forth again. Now, the Forest Service is reclaiming familiar territory, corruptly giving away the public’s forests to its timber industry partners.

Forest Service Logging Enabler
We would be remiss, though, in not also acknowledging a crucially important enabler of the Forest Service logging program’s Lazarus-like resurrection in our region. Conservation Northwest, which has admittedly done good work here and there (such as protection of parts of the Loomis State Forest in Okanogan County and, more recently, advocacy for wildlife passage in the I-90 corridor and Trust Land Transfer), has regrettably provided the ideal greenwash for federal chainsaws. In the late 1990s and early aughts, with National Forest logging well into its death rattle, Conservation Northwest dedicated itself to resuscitating the ailing patient.

With a toxic cocktail of ad hoc collaboratives, cherry-picked dependent variables (forestry is justifiably known as the softest of sciences), political lobbying, persuasion via legal tender, and direct cheerleading in the service of groupthink, Conservation Northwest convinced the Forest Service, the timber industry, and later much of the interested public that the very same agency which had inflicted decades worth of damage on our forests was also the one to make it whole again, while still producing volume. A win-win! The secret sauce here was “restoration” forestry for purposes of “accelerating” the development of old growth and corresponding natural conditions across the landscape. It was garbage in, garbage out, but of course irresistible to the Forest Service and to all who reflexively genuflect to the authorities in green uniforms. For Conservation Northwest, the motivation was simple enough. They had a seat at the table, perceived relevance, and of course enhanced leverage for continued fundraising — including, notably, from federal grants.

If Conservation Northwest were headquartered in West Virginia rather than Washington state, they would no doubt be collaborating with Governor Jim Justice, industry titans, and a few token miners toward promoting “clean” coal technology. Back in our neck of the woods, the Oregon Natural Resource Council, now Oregon Wild, performed a similar disservice down south, yet, unlike Conservation Northwest, expresses some remorse these days for the monster they helped create. Things have changed. You see, the Forest Service, with its renewed confidence and zeal for getting the cut out again, no longer has such a strong need for Conservation Northwest’s timber brokerage. The agency is increasingly content to do its own thing, having accepted the inches ill-advisedly given to it and now gluttonously taking a mile.

In the case of the North Fork Nooksack Vegetation Management Project, Conservation Northwest was initially disconcerted by the Forest Service’s unexpected jettisoning of a previous iteration, called the Nooksack Integrated Conservation and Enhancement (NICE) Project. Never mind that the subsequent “Son of NICE” was practically indistinguishable from its predecessor on the ground. The sore point was that, unlike NICE, the Forest Service was going its own way. The promise of NICE was that Conservation Northwest could crow to their funders and membership that they were working closely alongside the vaunted experts of the U.S. Forest Service to “restore” the forests and recreation facilities beneath ever-popular Mount Baker. Son of NICE, which merely eliminated an earlier planned trailhead restroom upgrade or two, had shut Conservation Northwest out from a self-promotional opportunity in their own backyard.

And so during Son of NICE’s initial scoping period and public comment window in summer 2020, Conservation Northwest joined the North Cascades Conservation Council in vociferously opposing it as the archaic proposal it is. The one means of derailing this catastrophe in the making, that being near-universal regional opposition to it, seemed for a time to be a real possibility. However, with impressive strategic dexterity, the Forest Service thereafter dangled a thinning-only alternative to its preferred thinning-plus-clearcutting alternative when publishing its draft environmental assessment in late winter of 2021. The agency grasped that the North Cascades Conservation Council would not soften its stance, but was confident that Conservation Northwest would not be able to sincerely oppose the thinning-only alternative and retain any semblance of ideological consistency. The agency bet right. It knew exactly where the crack in the opposition could be exploited.

Dutifully, Conservation Northwest took the bait and then directed its army of armchair warriors to write the Forest Service during the second and final comment period of Son of NICE to express their support for the thinning-only alternative. Moreover, RE Sources, a Bellingham-based outfit of merit and with a sizable membership, yet inexperienced in federal forest management, numbly followed with its own action alert. So similar was this RE Sources communique to that of Conservation Northwest, one might rather easily presume that the former simply took the latter’s alert and lazily slapped a new banner on it. The end result was foreordained. The Forest Service gladly harvested these few hundred comments expressing general acceptance of the larger proposal, albeit with a few concerns meekly expressed over clearcutting, then promptly turned around this fall and adopted the more aggressive alternative. That’s right, kids. Commercial thinning and clearcutting are coming to a National Forest near you.

Formal Objection Filed
The North Cascades Conservation Council and a few other entities, including the Nooksack Tribe and Sierra Club, have filed a formal objection to this project, but hopes are not high that much can be improved at this point beyond some nibbling around the edges. The opportunity to present a united front and demand that the Forest Service listen to the community, get with the times, and steward the Mount Baker-Snoqualmie National Forest in accordance with the public’s modern needs has shamefully passed us all by. The hall of forestry mirrors co-created by Conservation Northwest, plus their unenlightened self-interest, assisted by a RE Sources that got in well over its head, and the usual obsequiousness, incuriosity, and apathy of much of the local public brought us to this point.

Western Washington was cooked alive beneath a pair of bizarre heat domes this past summer. Our wild salmon and resident orcas are at the point of collapse. Fresh water is scarce and declining in quality. Ordinary folks are clinging to outdoor recreation as a last line to sanity. What is the Forest Service doing about it? They’re going to log holy hell out of the upper North Fork Nooksack basin. Diesel equipment will foul the air, chainsaws will roar, wildlife will flee (if they can), soils will collapse, weeds will spread, and logging truck after logging truck will speed down Highway 542 en route to the Sierra Pacific mill in Skagit County. Meanwhile, Conservation Northwest encourages you to renew to keep enjoying their exclusive member benefits.

Jim Scarborough is a Bellingham resident, public educator, and 20- year volunteer in defense of National Forest lands in the Cascades and Olympics which continue to be subject to resource extraction activities by the U.S. Forest Service. He serves on the board of the North Cascades Conservation Council (northcascades.org).