Compared to the rest of the continental United States, the Pacific Northwest is unique in offering a relatively cool, year-round gardening season, akin to the maritime clime of England and coastal Northern Europe. The tempering effect of the Salish Sea, as well as the semi-Mediterranean pattern of winter rain and dry summers, allows one to grow a wide variety of vegetables, most common culinary herbs, as well as a few semi-hardy over-wintering perennials. It is a unique opportunity to expand one’s horizons on what to grow for food, beyond the usual lettuce, tomatoes, carrots, corn and zucchini.

I will assume most gardeners will already have their tomatoes planted, preferably in a warm hoop house or protected spot, along with some peppers and a pot of basil for pesto. The first crop of lettuces and radishes are offering spring salads; the peas are climbing and soon to offer pods, and the early starts of cabbage, kale, and other greens are leafing up in the extended spring rains we have been having this year. It is best to be grateful that this year the reservoirs in the mountains are full, the ground water is close to the surface, and the artesian wells are flowing. It will be dry soon enough in July and August, given the climate change paradigm that is happening.

I am doing the usual assortment of Joe’s Garden tomatoes, along with trying a Croatian Brandywine variety as an experiment, which I hope will be a mix of Eastern European early ripening combined with American heirloom genes from the East Coast. One never knows with tomatoes in the Northwest, since we lack the overnight heat of the Midwest or Eastern Washington. Just keep the plants warm at night, never letting the temperature to drop below 50 degrees in your hoop house, in order for the flowers to set fruit. 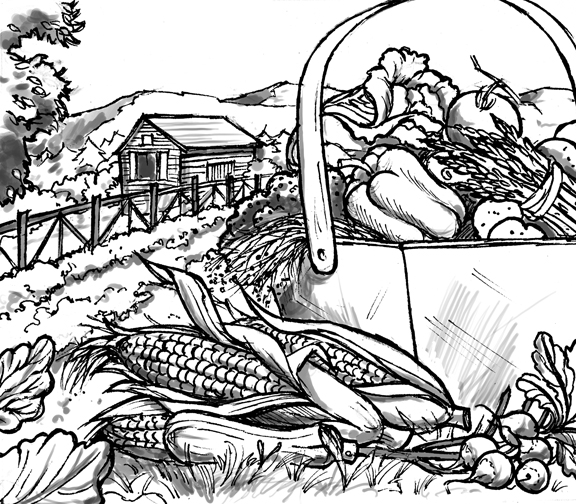 Unfortunately I am unable to successfully grow eggplants; each year they succumb to verticillium wilt, a disease that is commonly found in soil that has grown tomatoes or potatoes, crops I have planted in all sections of the garden over the years. Peppers are not affected by the wilt, so I make up the loss of eggplants by growing all the pepper varieties I can find: green, red, black, and orange for salads; 6-inch-long red Italian roasting peppers; as well as hot types such as early jalapeno, padron, or if you are a serious chili head, Ghost (Bhut Jolokia) peppers. I also have at least one tomatillo plant that will fill an entire corner of a greenhouse. The small, green or purple-husked varieties are actually in the gooseberry family, and the tart taste goes well in salsas as well as Middle Eastern dishes.

Protecting Sweet Corn
The one caveat I always have is to wait until June 1 to plant corn, to avoid rotting out the seed. I cover the seedbed with floating row cover to keep away the hungry birds that like to pull up the first corn shoots to get the sprouted kernel. The row cover also increases the soil temperature slightly for better germination. Once the shoots lift the cover 2-3 inches off the ground it is safe to remove it; the birds move on to easier pickings. I always grow a standard 70-80 day yellow corn, as well as a longer season, 80-day white corn such as Silver Queen, since it freezes so well and has that ultimate corn taste and tenderness. I still miss my favorite white corn, Platinum Lady, which unfortunately has gone out of production in this age of industrial amalgamation of agriculture.

Celeriac and Parsnips
This year I am trying new things as they appear in the nursery offerings. I used to grow celery-lettuce, for its tough, dark green stalks that were good for soup stocks. Ordinary celery is difficult to keep from bolting and spreading out in our long daylight hours. After seeing the celeriac roots in the farmer’s markets during the winter, I am putting in starts, with their 100-day-long growing season, and anticipate a harvest in the fall. It is slightly firmer than a parsnip in texture, and best eaten freshly grated or julienned with a creamy dressing. And I do love parsnips, perhaps a quintessential New England vegetable.

Parsnips germinate slowly, much like parsley, so it is best to keep the soil moist; I cover the rows with strips of cardboard until the tiny green leaves appear. Keep them well watered all summer, dig in the fall and store in damp sand. Left in the ground they are subject to voles and other critters that like sweet roots to dine on in the dark days of winter.

For variety in salads, I am planting radicchio, a slow-growing, slightly bitter chicory, whose curled purple leaves are a good contrast to soft lettuces. It will go well with purple mustard leaves to give a salad some surprising bite. I am also trying red vein sorrel in a pot as part of the kitchen garden for quick snipping, along with the usual chives and parsley. One perennial I always have in a large outdoor pot is garlic chives, a flat-leafed Oriental variety that will reliably come back each year, with white flowers on tall, stiff stems. It is ideal for a last minute, chopped addition to miso or other soups.

Perennial Vegetables
June is also a good time to consider setting aside plots for long-term perennials that will offer dependable bounty each year with a minimum of maintenance. Artichokes will come back even after a cold winter such as we had this year. They need a well-fertilized bed with adequate water during the summer dry spell. A thick protective mulch in the winter will help the roots survive after the tops die back. Harvest the buds before they get too tough; think of them as tasty, as opposed to weedy, thistles.

Another long-lived reliable is horseradish, a traditional source for a spikey condiment. Just clean and grate the roots, then add a bit of vinegar and a touch of salt for a western version of wasabi. In fact, many cheaper brands of wasabi contain horseradish with a dose of green food coloring. Note: horseradish can spread aggressively, so keep it in a container or in a walled-off garden bed.

Finally, after years of meaning to, I have planted a bed of asparagus in a permanent bed near the raspberries. I found Purple Passion root crowns, which once established in several years should start yielding colorful sprouts. Think of perennials as a vegetable orchard that with minimum care returns each year without the annual rituals of tilling and planting.

A Final, Long-term Note
June is the time to plant long-season brassicas such as Brussels sprouts, red cabbage, and over-wintering kales, as well as leeks, for fall and winter harvests. It is important to cover the cabbage family plants with floating row cover, well sealed at the bottom, to deter their endemic pests, the cabbage root maggot fly in the spring and the white cabbage butterfly, which floats over your brassicas all summer long. It is never too soon to start thinking of the dark and rainy seasons ahead at the end of summer. These Northern European standards will keep you harvesting all winter long, once the bounty of summer has disappeared. Enjoy the summer, but prepare for the winter.
_________________________________________
Peter Heffelfinger, a Washington State University master gardener, has gardened organically on Fidalgo Island and the Skagit Flats for over 40 years. He has given workshops in year-round gardening for Transition Fidalgo/Eat Your Yard, Christianson’s Nursery, and at the Washington State University County Extension Service. He is a Salish Sea Steward, working on the invasive green crab survey.