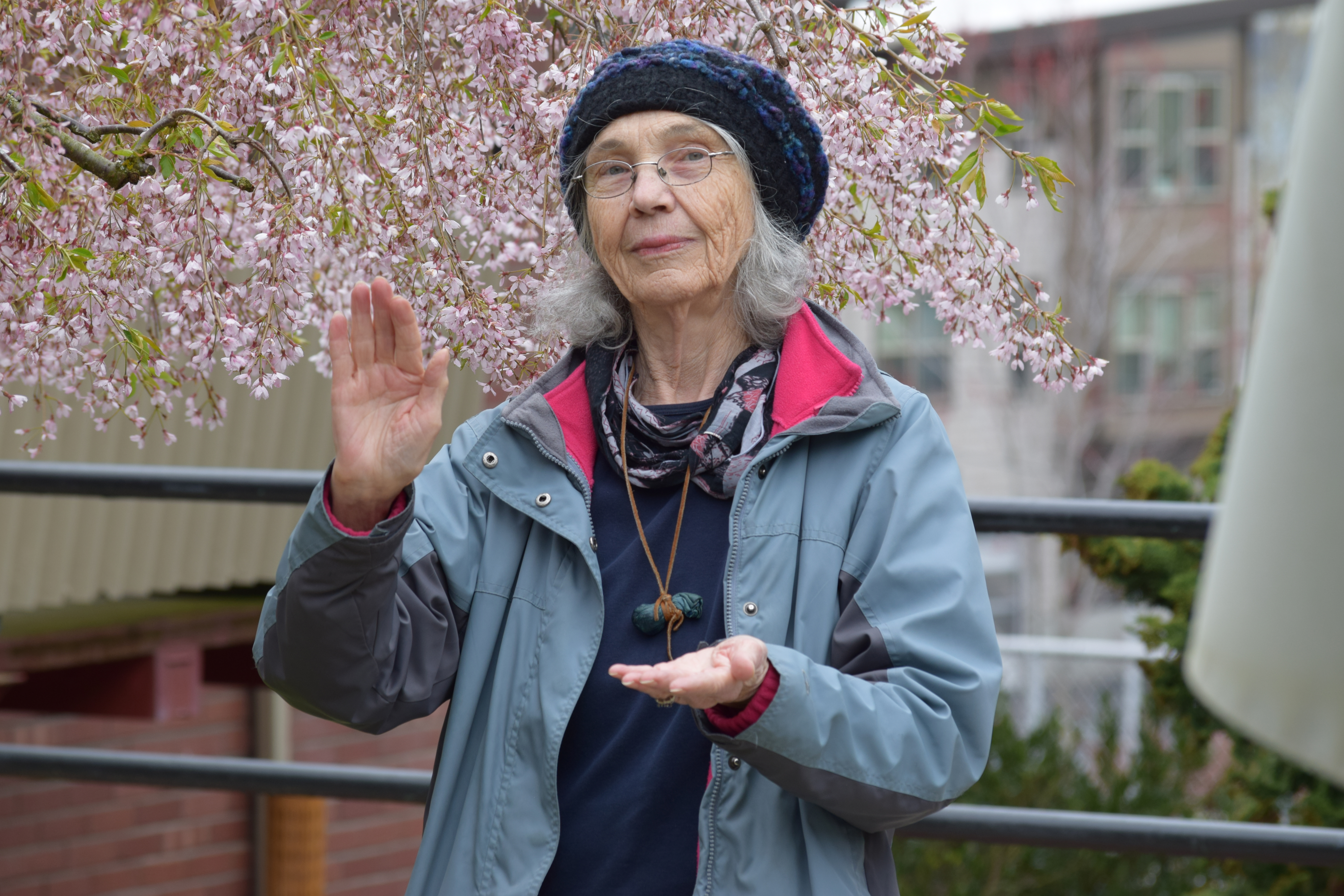 Ellen Murphy, 80, has been a lifelong nonviolence practitioner and teacher for peace and justice. She was arrested many times as a 10-year member of The Desert Waves Affinity Group at the Nevada Nuclear Weapons Test Site in the late 80s and 90s. On her 50th birthday she entered the Tonopah Nevada jail to serve an eight-day sentence as the last person ever to be put on trial for simple trespass at the Test Site, never expecting that she would wake up shackled to a hospital gurney and on oxygen. Through negligence, there had been a leak of carbon monoxide into the jail. She walked on The Great Peace March from L.A. to D.C. in 1986 and was arrested at the Strategic Air Command in Omaha. To protest the first Iraq invasion she was arrested for blocking the entrance to the Spokane Federal Building and placed in solitary confinement in the Federal Prison in Spokane. Here in Bellingham she was in a group arrested for trespass at the Recruitment Center after distributing information on depleted uranium and later was wrongfully arrested for trespass at Congressman Rick Larsen’s office while mourning the loss of life in Iraq. That one was an illegal arrest that resulted in a law suit by Ellen and her late attorney and friend Joe Pemberton. The city complied with her request that she be given police protection at Larsen’s office while she finished reading the names of the dead. The judge in her first trial in Ithaca, N.Y. acquitted the six mothers and 13 children who had blocked the Selective Service Center to protest the Vietnam War draft. Ellen wrote the Free Speech defense and it was the only time she was ever acquitted.

Letter to a Young Activist

All this talk of walls, Lock in. Shut out.
High lies and misdemeanors
against who we really are.
And from each wall,
a fallen Humpty Dumpty,
all the king’s men shouting
How great! as they attempt
to restore the sulphurous remains.

There are walled gardens.
Birds fly over.
No wall of itself can keep them out.

There are walled hearts.
It’s an absolution to abandon construction.
Let it crumble, if you have one.
Liberate your heart,
exposed and naked of its stone.
For death of your wall, forget the inquest.
Just fly over it all, singing.

Kathryn Fentress: How did you begin this journey?
Ellen Murphy: I was raised in upstate New York in a loving Catholic family of independently opinionated thinkers and a saint of a grandmother (who was Protestant), and I believe the seeds of my peacemaking were planted through observing and absorbing the gifts she gave us of humor, wisdom, unconditional love and, what I might call the fruits of her garden, of service to all. I was devoted to the church, and I wanted to serve by becoming a teaching nun. At 17, I applied to join the Sisters of Charity and was accepted, but they decided to make me wait a year to be sure of my commitment.

What changed for you that next year?
I did a lot of critical thinking that year. I was also stepping back some from the church which was difficult because I had taken refuge in it for so long. I went on to a B.A. in English at Ithaca College, married, taught high school English, and began raising my five children in Ithaca. In 1965 I read a lot about Vietnam and was horrified at the war my country was waging. The boy next door was the first Ithacan killed there. I’ve been an activist ever since. I was reading a radical Catholic newspaper and learned that the Archbishop had sent Father Daniel Berrigan out of the country for his protest of the Vietnam War. Berrigan wrote a diary, however, and the diary was published. I read his poetry and books, and when word came that he had accepted a position at Cornell, I went to everything he offered and became part of a close circle around him.

For Dan, for all of my teachers and for me, nonviolence is a tactic and a way of life. One of many examples of the spirit of nonviolence occurred during the walk across country. We were protesting at the air base at Omaha where nuclear armed planes were at the ready. Many of us were lined up to trespass, each of us with a soldier to take us away.

Nonviolence can hold a mirror to the opponent’s wholeness, and free the practitioner of the ego’s fears and opinions so that our being is present to receive intuitive information about how to proceed. I was in that state of being that day, in part due to the dances some of the women had done to remember Hiroshima. Then it was time; as I stepped over the line, my soldier, who was a woman, came forward, took my left arm by the elbow and left my right arm free as she led me away. In direct action it’s known that you do not touch an armed arrester. My ordinary mind knew better, but without any conscious thought or decision, my right arm went around her shoulder. She left it there, didn’t speak or move it off and we kept walking. It was a scary time that required us to not look at each other so we could both preserve our dignity. She had to face forward to maintain her dignity as a soldier. I needed the dignity of being able to love her while accepting the results of the mission. We looked like an arrester and arrested, but we were sisters for that walk under the Omaha sky. I glanced out of the corner of my eye as she released me into detention and I saw a tear on her cheek, which I honored with no eye contact. I just said, “Thank you.” The spirit of nonviolence had touched us.

Wonderful story. Thank you. When did you move to Bellingham?
In 1995 I came for the birth of my daughter Maggie’s child. When the midwife offered for me to cut the cord between my daughter and my granddaughter, I did and knew then I had to stay here and be part of her life. Maggie then encouraged her brother Jan, a musician and songwriter, to move here as well, and they performed together in his band. I have a son Tony in the Portland area, a daughter Kristin in Ithaca, and a son Joe in San Diego, and four grandchildren. After getting settled, I took a counseling position at the St. Joseph’s Hospital addiction treatment center where I gained in riches about the power of letting go to the present in love and truth from my teachers, those in recovery. I am grateful for some acknowledgement and awards I have received over the years, but the one that humbles me the most was when as a counselor in San Diego, the East San Diego Narcotics Anonymous made me an Honorary Addict.

What have you been doing as an activist in the past few years?
Last summer we organized a celebration of the arrival of the restored anti-nuclear sailboat, Golden Rule, sailed by Quakers, to the Marshall Island where the U.S. was doing nuclear testing in the 1950s, until they were stopped and arrested. Recently I helped organize a shared listening and dialogue to honor the 50th anniversary of Martin Luther King’s prophetic “Beyond Vietnam” speech, in which he exposed the roots of U.S. violence and called for a radical revolution of values.

What’s next?
When my last birthday came around, with my children’s financial support and blessing, I spent three days walking and meditating. I know I need to spend time going through my archives and do writing on nonviolence. I will always be where I feel called to be for peace through justice and for Mother Earth.

Please say more about your understanding of nonviolent action.
Barbara Deming gave us the image of two hands: inside us there is the yes and the no. I imagine my right hand is palm up and facing outward saying “no,” I will do everything I can to stop the injustice I am witnessing, and my left reaches out saying to the antagonist, “yes,” I invite you to your wholeness. We belong to each other. It is dangerous work at times. We don’t expect anything, but are fully present in the energy we are in. It has done its work for me beautifully in both direct action events and even when I am riding the bus or walking around downtown. One of the principles is to be always ready for opportunities presented to us.

What message would you like to offer the readers in our community?
It would be King’s message of powerful love (“the sword that heals”) and that of all of the other great fighters for peace and justice. We need to mourn for the planet, the air, the creatures, and the people of Earth. I would add that Einstein called upon us to get beyond the “prison of the ego” and to open our hearts. Fifty years ago King told us what to do — to unite with the world revolution of the oppressed, to create the Beloved Community.

How do you keep going, especially with what we are facing now?
I lose it sometimes and that energy has to be discharged. Trump is a stand-in for a violent, narcissistic, racist empire. My emotional engagement is resisting with soul force. I believe love is a living energy and we can get out of the way of it and allow it to flow through us all the time. We need to envision this love going to all our Earth, even to those we view as her greatest destroyers. Love put my arm around that woman soldier. When I have the open heart, I experience little miracles all the time.