I’ve told my children that when I die, to release balloons in the sky to celebrate that I graduated. For me, death is a graduation.
Elisabeth Kubler-Ross

When your time comes to die, be not like those whose hearts are filled with fear of death, so that when their time comes they weep and pray for a little more time to live their lives over again in a different way. Sing your death song, and die like a hero going home.
Tecumseh 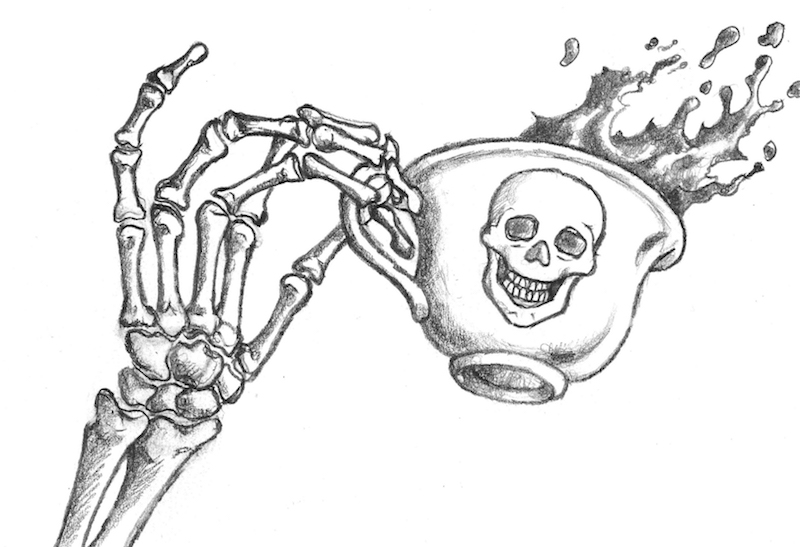 Death at age 44 shocked acolytes of Briton Jon Underwood who died suddenly June 27, 2017, in London of brain hemorrhage from undiagnosed acute promyelocytic leukemia. Underwood founded Death Café to encourage people around the world to discuss, over tea and cake (coffee in the U.S.), life, the finality of life and why we fear it.

As a Buddhist, Mr. Underwood had already contemplated the philosophical questions of dying. Everyone experiences it, but he felt the topic seemed so taboo that no one wanted to discuss it, according to a July 11, 2017, The New York Times Europe section article.

From the basement of his house in Hackney, an artsy borough in London’s East End, in 2011, Mr. Underwood perpetuated a movement that spread to more than a dozen countries with more than 1,000 gatherings, The New York Times reported. Underwood soon learned that meetings expressed more laughter than sadness, and people discussed more about living than dying.

Bellingham
No one was more shocked than Bellingham’s 2013 founder of the local Death Café, Sandy Stork, a retired geriatric mental health specialist currently caring for her 96-year-old mother.

Consider choosing to die at the first opportunity rather than shopping for a better death by prolonging your end of life artificially hoping something better comes along.
Robert Duke

The Death Cafe model is agenda-free discussion, with the topics determined by attendees. In fact, Death Café is as much about what it is not as what it is and, therefore, excludes events with themes, menus of topics and guest speakers.

Our Work
Jon Underwood stated on his website the principles by which Death Café operates as follows:

Death Cafes can be run by anyone who agrees to use our model of group-directed discussion.

We’ve tried to keep the rules to a minimum but have some non-negotiable principles — such as not seeking to sell products or charging for admission, which must be adhered to by anyone affiliating with us. We offer use of our model, website and social media and support to set up your own Death Cafe. All of this is 100 percent free and will continue to be so. Because of this, in a short time Death Cafe has spread quickly and done an enormous amount of good. It has become one of the world’s biggest death-focused community projects.  Feedback shows that for many the experience of talking about death can be illuminating and even transformative, especially in a society that marginalizes death.

Our Death Cafe organizers are an amazing group of people who feel passionate enough about the value of talking about death to spend their time organizing these events. There have been hundreds of articles and an increasing number of radio and TV programs about Death Cafe, giving organizers and attendees a platform to share their wisdom about death and dying with the public.  Around the globe Death Cafe organizers have brought communities together and have gone on to create all manner of amazing work.

About Our Death Cafe
Sandy Stork founded Whatcom County’s Death Cafe in August 2013, at Bellingham’s Coop Connections Building on Forest Street. More than 40 people showed up! Virginia Herrick joined Sandy initially as a facilitator and has since been joined by fellow facilitators Diane Wood, Chris Richter and Barbara Aiken.

I’ve felt rewarded by Death Café by the many appreciative responses in this venue I provide where people can delve deeply into a sensitive subject they cannot discuss anywhere else.

Bellingham meetings are from 6:30 to 8:30 p.m. the third Wednesday of each month (Not all cafes meet monthly). We typically have 15 to 45 people, so we start by introducing the history and principles of Death Cafe and then begin our group discussion. The meeting room contains 10 or so round tables capable of seating up to 10 adults. But tables of 10 are encouraged to break into two groups so everyone has an opportunity to speak. Each table has two or more topic cards suggesting various themes or subjects for discussing death and dying from every aspect. 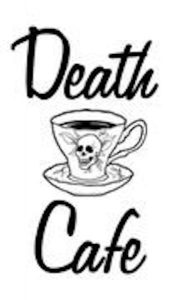 Attendees are encouraged to seat themselves at the table with the appropriate topic of their interest. That particular topic may or may not develop depending on how the conversation gets started, and where it naturally leads. Attendees are encouraged to circulate among tables to sample discussion or to find an alternative venue if they are disappointed in their first choice.

The Mysteries of the Afterlife table is often the most populated and generally raucous bunch of each meeting. Mysteries include séances, ghosts, reincarnation, heaven, hell and visitations. There’s an alternative meeting room elsewhere at Moles and the Mysteries group often adjourns to it so their laughter and boisterous talk don’t disrupt the discussions at the more conventional tables.

These Death Cafes are, in our own way, bringing the dead back into our daily lives … This is altogether a healthy and positive thing.

A volunteer moderator, usually one of the regulars, like myself, is charged with making sure everyone gets a chance to speak and to prevent anyone from dominating the discussion to the exclusion of anyone.

After 60 minutes of discussion, one person at each table is asked to summarize what was discussed. A meeting ends with about 15 minutes for socializing, mingling and cleaning up. Often individuals hear of something interesting from one of the other tables and have a question or comment to exchange.

No proselytizing or commercial connections are permitted. No lecturers or program presenters are allowed. Privacy is emphasized and anonymity is promoted. No dues are required, but donations are accepted to cover the cost of coffee, tea and pastries.

Books are often mentioned and discussed as well as The New York Times and Atlantic Magazine articles of possible interest to members. Death and dying celebrity appearances in Bellingham, usually at Village Books, are announced, as are other events in Bellingham such as Palliative Care, Hospice and university activities related to death and dying, and end-of-life preparation such as Advance Care Directive (ACD) preparation.

Thanks to supporter Brian Flowers, the Moles green burial specialist, monthly meetings are held at the Moles Community Life Center, operated by John Moles, fourth generation owner of Moles Farewell Tributes and Greenacres Memorial Park. Moles does not sponsor Death Café, nor can anyone. Rather, the meeting space is generously donated and has been home to Death Café for about two years.

Moles Community Life Center is located at 2565 Lakeway Dr, Bellingham, Washington, 98229 at the intersection of Lakeway Drive and Woburn Street.

Most meetings are hosted by Sandy and Virginia on the third Wednesday of each month, year-round, and further local information is available online at http://deathcafe.com/deathcafe/2890/. Death Café international is online at deathcafe.com.