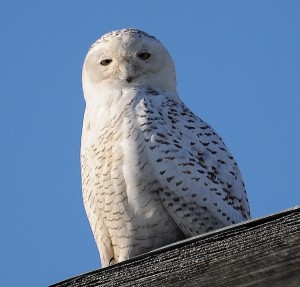 When the beginning of the year rolls around, there is no need to put away your binoculars and bird books, just because the weather has changed dramatically from idyllic to challenging. In the overall scheme of things, we might prefer to do all our birding in shorts and T-shirts, but if you live where we do, that would be a foolish idea, especially this month. Although we live in what is considered to be a moderate climate, some days in the field can be far from moderate. Driving snow and strong northeast winds can quickly turn an outing into a test of survival. I would be remiss if I didn’t offer a thought or two about birding at the beginning of the New Year.

A little preparation and a healthy dose of common sense will go a long way, before you ever leave the house. The ultimate key to a successful outing is comfort, no matter what your plans are and what time of year it is. Of all the weather-related adages you’ve heard, the most pertinent have to do with how quickly conditions can change, especially here in the Pacific Northwest. For those familiar with local winter weather conditions, layering is the way to go but make sure that one of those layers is waterproof. Nothing will ruin your day more than being wet. It only adds to the injury of being cold.

From years of first-hand field experience, I have a good working knowledge of what to wear to keep the elements where they belong. Case in point: a January day in 1999 when I drove to Skagit County to participate in the Padilla Bay Christmas Bird Count (CBC). Traditionally, CBCs are held regardless of the weather on Count Day. In fact, recording weather conditions is an important part of the data collection process. On that particular day, the temperature was in the single digits and a strong northeast wind pushed the wind chill factor down even more. All fresh water was frozen, so the challenge of staying warm was compounded by the difficulty of finding birds.

The drive from Bellingham and the warmth of my vehicle left me unaware of how cold it really was, so it came as a bit of a shock when I stepped out of my truck at Rosario Beach. The temperature was absolutely frigid. This was not to be a fun day in the sun, so I added layers until I felt comfortable enough to go out and count birds. I have a tendency to carry every conceivable item of clothing in my truck that I might need, given the vagaries of weather. I even carry a complete set of dry clothes for unexpected occasions like rolling my kayak, which is another story for another day. Point being, it’s best to be prepared, just like a good Boy Scout.

Bundle Up and Get Outside
After you’ve made all the necessary preparations to make your day of birding enjoyable, it’s time to get outside and see a few good birds. Your destination will pretty much dictate the species you’re likely to see. Consulting old CBC records is a good way to be aware of the possibilities; although, I prefer to just go and see whatever I see. It sounds a bit simplistic, I know, but my priority has always been to just be outdoors … birds certainly add to the enjoyment. Being open to whatever awaits is more relaxing and provides flexibility. At the end of the day, it’s always about what you saw, not what you didn’t see.

In the December 2015 issue of Whatcom Watch, my column “Winter is for Waterfowl” focused on waterfowl as a primary target for winter birding. While waterfowl will always be near and dear to me, there’s so much more to see throughout the colder months. The gamut of passerine and shorebird species that spend the winter here is complemented by a variety of raptors that frequent the areas where food is more plentiful. Birds that tend to go it alone during the breeding season find solace in flocking together when cold weather rules the day.

Get to the Lowlands
While most of the snow in this part of Washington stays at higher elevations, the lowlands can be ideal for birds and those of us who watch them. Many resident birds that favor higher elevations for three seasons take part in an altitudinal migration when wintry conditions force them to seek food elsewhere. The natural foods that are available in the lowlands are supplemented by a little human assistance in the form of bird feeders. Feeding birds in winter is an enjoyable and educational pastime. Having the birds come to you is especially ideal for anyone who is unable to be out in the field.

Notable high country birds among the patrons at local feeders are pine siskins and evening grosbeaks. Siskins and grosbeaks often travel in sizable flocks and anyone who feeds birds knows that these two species consume a lion’s share of sunflower seeds. Presently at my own feeders, siskins are in good company with dark-eyed juncos, red-breasted nuthatches, chestnut-backed and black-capped chickadees, and house finches. Additional feeders attract Anna’s hummingbirds, woodpeckers, and bushtits. Lend a hand and feed birds at your home, but remember to keep the feeders clean.

Watching birds at your feeders is fun but the real cold weather birding action is out in the field. Local parks, lakes, and ponds are great places to see a variety of woodpecker species like the magnificent pileated and the more common northern flicker. As you travel through some of our great city parks, keep your eyes and ears open for barred owls. This species is increasing its population in the Pacific Northwest and sightings continue all the way down to sea level and even in the downtown core.

Shorebirds Aplenty
If your target species are shorebirds, start your day at Blaine and Semiahmoo and follow the shoreline south to cover all the protected and ice-free estuaries and embayments all the way to Larrabee State Park. In the past few weeks (today is Dec. 14), despite the weather conditions, I’ve observed oystercatchers, sanderlings, black turnstones, and surfbirds along with large seasonal flocks of dunlin. Killdeer are among the most common species in North America and are usually present on local tide flats.

For the raptor watchers among us, Whatcom County has some of the finest locations to observe wintering hawks, eagles, and owls, as well as four of the five falcon species. Numerous bald eagles come down from their northern nesting grounds to feast on spawning salmon in Pacific Northwest rivers. After the salmon runs wind down, most of these eagles will flood the lowlands for a couple of months before heading north in late winter or early spring. Resident nesting pairs will remain to rebuild existing nests or make new ones for the breeding season.

Best viewing for winter raptors is along shorelines and open agricultural fields throughout the county. Traditionally, the Lummi Flats has had large populations of northern harriers competing for the same air space with short-eared owls. A northern visitor that frequents the flats is the rough-legged hawk, hunting in many of the same habitats as a close relative, the common red-tailed hawk. Of course, winter birders often go a little berserk when the first snowy owl is spotted, often at Sandy Point. Nothing highlights winter birding like a good snowy or three close to home.

Don’t let the weather stop you from leaving the cozy confines of home. There is so much to see and so many places to go if you wish to engage in an active winter of bird watching. It’s an entirely different landscape from spring and early summer birding and it’s often more dramatic, all things considered. Large flocks of birds create a movable feast that must be seen to be fully appreciated. Remember to plan ahead for maximum enjoyment and choose your layers well.