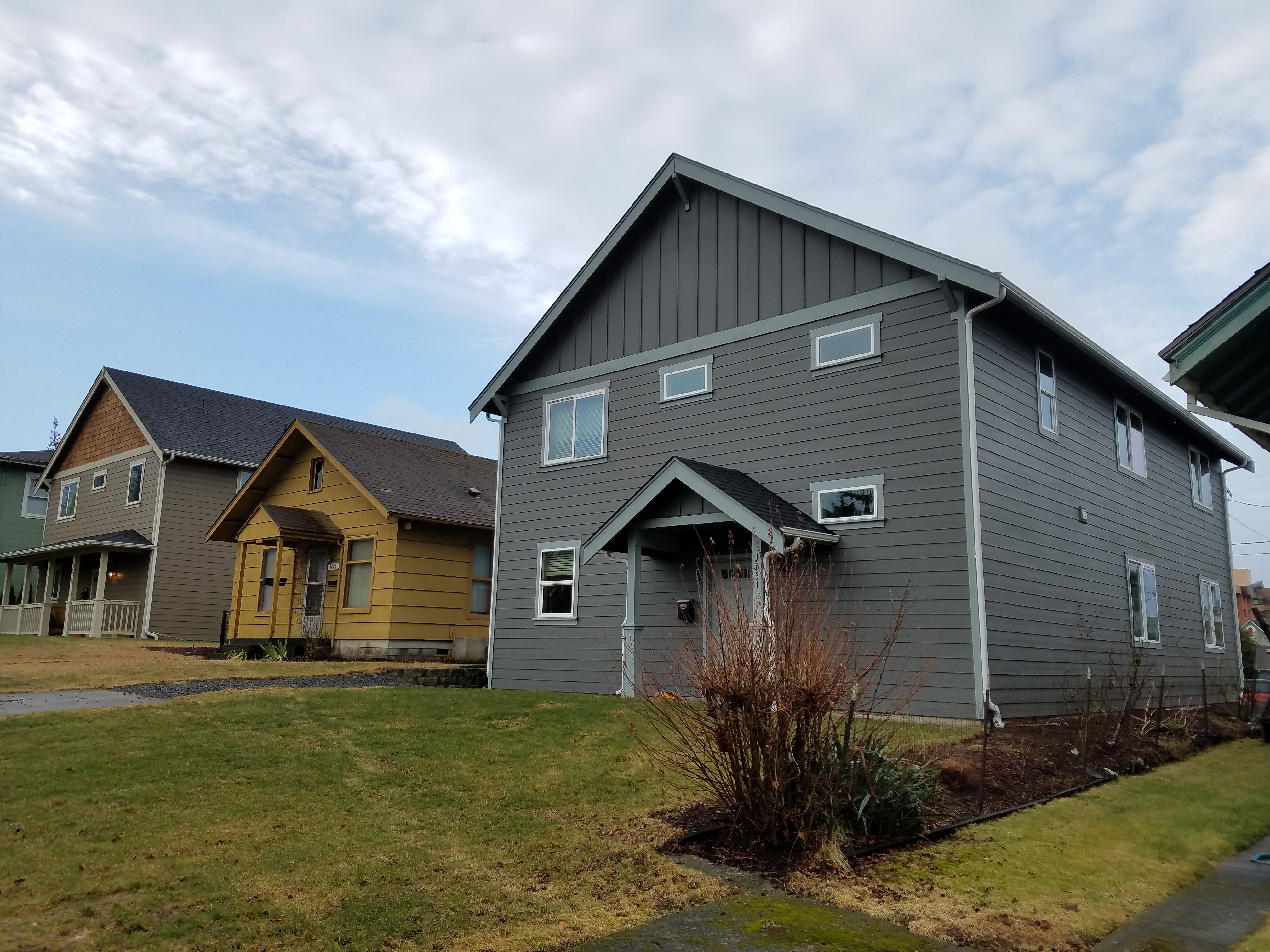 Bellingham faces numerous housing and land use problems. Rents and housing prices are soaring while landlords undercut housing availability by buying up affordable houses to rent at prices that lock out families. Vacation rentals are beginning to invade neighborhoods to the detriment of badly needed long-term rentals. Unpermitted dwelling units proliferate while illegal boarding houses wreak havoc on neighborhood character. There is a lot in store for the citizens of Bellingham in 2017 in the realm of housing and land use.

Last year, in the guise of affordability and sprawl avoidance, the Bellingham City Council gave residents a revised Comprehensive Plan laced with small but potentially powerful time bombs that everyone should know about. These will change forever the character of our neighborhoods but will also not deliver on the stated goals. We are moving toward questionable homogenization of zoning.

Pay attention — below are the standout issues as we move into 2017.

Revised Ordinance on Accessory Dwelling Units
Accessory Dwelling Units (ADUs) are a fancy name for what used to be called mother-in-law apartments. These units can be attached to the house with a separate, outside entrance for privacy or be detached (1) like a studio above a garage or a freestanding, small dwelling unit. Current law allows these housing types, which were essentially created to help families in caring for aging parents or to supplement family finances with a modest rental income.

These units are not allowed in single-family areas, where new detached ADUs have been illegal since 1995. Then-existing detached ADUs were grandfathered for those who registered their units and lived in either the main house or the ADU. But few were registered, and owner-occupancy remains largely problematic.

Hundreds of these illegal units can be found around town.
The ADU ordinance is now under review with the goal of amending it to allow such units in single-family zoned areas. But there’s a problem — the city has no inventory of unpermitted units. Those in favor of amendment argue that this housing type will not only provide affordable rentals but also help densify the city to avoid expanding the Urban Growth Area and provide an income for the single-family homeowner.

At such costs, the return on investment (ROI), as developers like to say, “does not pencil out” well for such units. Our own planning director, moreover, told the City Council that ADUs will not solve our housing crisis. Absent a current ADU inventory, planning now for future density of ADUs supported by today’s service levels seems dicey.

Some landlords are certainly eager about the possibility of adding dwelling units on single-family property rentals. Already small, older homes are being bought and razed to build out mega-plex, “single family” rental housing with as many as seven bedrooms. Three such were recently built, seven-bedroom, “single family” homes, in the York neighborhood, one on Humboldt and two on Iron Street. Add an ADU and the landlord has an additional windfall.

Also trending is the conversion of long-term rentals to unregulated vacation rentals, which promise increased profits at the expense of local, longtime renters. Several-hundred vacation rentals now are listed online for the Bellingham area on Craigslist, AirBnB and VRBO. Which brings us to the review of the boarding housing ordinance and the “Rule of Three.”

Review of Boarding Houses and Illegal Dwelling Units
The definition of “family” in the Bellingham Municipal Code (BMC) (3) reads, “… one or more persons related by blood, marriage, or adoption, or not more than three unrelated persons, living together within a single dwelling unit. For purposes of this definition, children with familial status within the meaning of 42 U.S.C. 3602(k) and individuals with disabilities within the meaning of 42 U.S.C. 3602(h) will not be counted as unrelated persons.

A single-family rental home, therefore, becomes a boarding house under this definition if there are more than three unrelated people as tenants. Boarding houses are not permitted in single-family zoned areas. Therein lies the problem.

Such codes defining family were affirmed in the 1974 U.S. Supreme Court decision Belle Terre v Boraas, as a legitimate way for cities to control density. The City Council attempted a review of this portion of the BMC a few years ago, but abandoned the effort.

Landlords throughout the city have ignored this portion of the municipal code for decades, renting single-family homes to groups of five, six, eight or more individuals. Unfortunately, the city has given free rein to landlords on single-family rentals. Not one case of an illegal rooming house has been taken to court in the past decade or more.
For example, repeated efforts by residents on 46th Street in the Samish neighborhood failed to get the city to shut down four such rentals on their street. Two of the rentals housed members of the university’s women’s soccer team and the now-defunct football team and were perpetually overcrowded and the scene of loud parties.

Western Washington University has chosen not to be a player in Bellingham housing issues, and has spent the last 40 years increasing enrollment by about 50 percent without adding to its existing, on-campus 4,000 bed dormitory space. Since 1971, the university built on-campus units to house just a 100 or so students but has a plan to increase that by another few hundred adjacent to Buchanan Towers. A drop in the bucket.

The city, however, has accommodated this growth over time by turning areas near the campus into student housing districts. It has rezoned single-family areas filled with grand old houses, like along Garden Street. In other areas, including the Sehome and Samish neighborhoods, it has allowed landlords to stuff students into illegal rooming houses in existing single-family areas, thereby in effect creating additional rezones.

Some neighborhoods such as York have a preponderance (54 percent) of rented single-family homes, the density of which seriously distorts that neighborhood’s character. More people, more cars, more noise.

The practice of overloading these rentals with tenants also corrupts the rental market rates as landlords can easily charge each tenant $500 per month with some rentals raking in as much as $3,000 – $3,500 per month. Ironically, this relatively and artificially cheap housing choice by groups of individuals destroys affordable rental housing for families who cannot possibly meet these high monthly rents.

City attempts to enforce the code have generally fallen under the “too hard to do” category, allowing illegal boarding houses to proliferate in almost every neighborhood. Lately, however, the city has been gradually admitting to the deleterious effect of these practices by such scofflaw landlords and is looking for enforcement methods. It is considering a program similar to that adopted by Ft. Collins, Colorado, which has a successful program of enforcement action against illegal boarding houses. But such methods are revealing themselves slowly, leaving frustrated neighborhood residents fuming after decades of neglect.

Here’s the problem: the city wants neighborhoods to take on more density, but there has already been a continuous, hidden density increase over the decades, a de facto up-zone to boarding house districts. And landlords won’t voluntarily relinquish these cash cow illegal rentals, which remove single-family homes from the market and drive up purchase prices for all.

Single-family rental homes should be returned to the market as affordable housing.

Revised Subdivision Ordinance
Of the three issues presented here, revising the subdivision ordinance (4) is mind-boggling tedious but may contain changes that could radically alter the character of neighborhoods — and give a green light to developers in the name of density and infill.

More than 30 issues have been formulated over the last two years by the Planning Commission, aided by the city planning staff and more recently by a seven-member “steering committee” filled solely with members of the development sector. A three-member subcommittee of the Planning Commission that reviewed the steering committee’s work has two members whose current profession is real estate development. This is not to say that there were any shenanigans in the formation of subdivision revision issues, but it should at the minimum give us pause about how issues are being framed, and by whom.

First, pipestem lots are those created from subdividing a larger lot but require easements (the pipestem) to the newly created lots because only the original lot fronts on a road. The lot layout resembles a flag, the pole being the long driveway that provides access.

This creation may be attractive in neighborhoods like Birchwood, where many lots have limited frontage but are quite deep. The owner keeps his home on the front of the lot and creates two lots in the back for two additional homes. Furthermore, these new homes can possibly have ADUs attached (or even detached if the city gets its way) so that the single-family dwellings thus built can create yet more density. So, a lot with a single home that creates two additional lots may end up with six dwelling units, three homes and three ADUs.

Second, lot averaging deals with “single parcels that do not have sufficient site area for subdivision.” The Planning Commission committee did not consider this issue, but the steering committee suggested that the Infill Tool Kit (cottages, small house, duplex, triplex, townhouses, shared court, garden court, carriage house and accessory dwelling units) be considered for use on lots created by size averaging. Presumably, the Infill Tool Kit could be used on single-family zoned lots in neighborhoods where it is now forbidden.

Lot standards reflect the lot size standards in existing neighborhoods. The question is if these standards “are still necessary or should one consistent standard be applied to all land uses,” according to the committee report. Neighborhoods with water runoff and slope issues such as Samish currently have single-family zoned (low density) lot size of 12,000 and 20,000 square feet. The city could move to a standard 8,000 or 10,000 square foot lot.

There will also likely be a big push this year to allow the use of the Infill Tool Kit within new, single-family subdivisions. We can also expect pressure to use the Tool Kit in established neighborhoods, because it is mentioned several times. From the city’s perspective, the key is to “allow additional infill opportunities.”

The Planning Commission conducted its first work session on the subdivision ordinance on January 12, 2017. The present ordinance eventually will be repealed in its entirely and replaced by the new ordinance that the commission is reviewing paragraph by paragraph.

All of this rethinking and revising is being done under the assumption that these changes will create affordable housing and eliminate or sufficiently reduce sprawl. However, the city has yet to present a coherent picture of the current housing situation. City residents should demand that city government provide solid evidence of the promised advantages and list possible unintended or deleterious consequences.

The last thing we need is to create windfall profits for landlords and speculators at the expense of neighborhood character.

______________________________________
Dick Conoboy is a retired federal resource manager and former Army intelligence officer with service in Europe and Asia. He is a regular contributor to the local news site Northwest Citizen and writes his own blog on zoning issues, Twilight Zoning in Bellingham.