This article first appeared in the winter 2020 issue of The Planet magazine, a publication of Western Washington University’s Huxley College of the Environment.

For Denis Hayes, there had been no environmental movement. It was the ‘60s and civil rights, the Vietnam War and women’s liberation were igniting pandemonium in the country, contrasting the submissive tone of the ‘50s. “Silent Spring” by Rachel Carson evoked criticism of the use of pesticides in 1962 and notice was growing of the gritty, slate-gray air over Los Angeles and the green sludge of the Detroit River. Still, the words “environmental movement” weren’t echoed until April 22, 1970.

The first Earth Day led 20 million people to flood streets and participate in teach-ins as the birth of the modern environmental movement. Hayes, the national coordinator of Earth Day 1970, was at its helm. Fifty years later and Earth Day’s relevancy is sustained by a new generation looking to solve an array of problems from climate change to environmental justice — all while Hayes works to maintain the legacy that he and millions of grassroots activists created.

Hayes’ involvement with Earth Day began with a call from Wisconsin Sen. Gaylord Nelson, the founder of what would become one of the most observed secular holidays in the world. Nelson asked the 25-year-old student to drop out of his graduate program at Harvard University’s Kennedy School of Government and become the event’s national coordinator. Hayes organized youth activists to reach out to high schools and colleges across the country to conduct environmental teach-ins on air and water pollution. A New York Times ad which catalyzed the event dubbed it Earth Day.

“We had no money,” Hayes said. “It was lots and lots of all-nighters. It was like cramming for exams every week.”

Hayes started Earth Day 1970 at a sunrise ceremony with tribes at the National Mall in D.C., before flying to New York City for Earth Day’s largest event that year with over one million people in the streets. Chicago was the third stop before ending the day back in D.C., talking to national news. Carbon footprint was not a known issue at the time, Hayes swiftly pointed out.

“I only brought $12,” Hayes said. “I was just so freaking tired it hadn’t occurred to me that I needed to stop at a bank and get money.”

The money didn’t last long. On his ride from the JFK airport, Hayes said he was faced with one option: stiff the cab and run into the New York City crowd. To this day, he overtips taxi drivers and advocates for activists better managing their sleep.

The work paid off for the youth activists and Earth Day helped set the agenda for some of the first national environmental legislation, including the creation of the Environmental Protection Agency and the Clean Air and Clean Water Acts.

Just a Bunch of Kids
“They were dismissed by some of my colleagues at the House as being just a bunch of kids,” said Pete McCloskey, co-chair of Earth Day 1970 who served in the U.S. House of Representatives from 1967 to 1983. “They looked a little scruffy sometimes but they sure were effective.”

Now at 75, Hayes sits in his downtown Seattle office with a 50th anniversary New York Times Earth Day ad on his desk. His sleep schedule has improved — slightly. Instead of working 90 hours per week on Earth Day, he works 30 as board chair emeritus to the Earth Day Network. But he also is the CEO and president of the Bullitt Foundation, a nonprofit that endows environmental organizations in the Pacific Northwest.

Hayes helps with whatever is needed for the D.C.-based Earth Day organization from his office, touted as one of the greenest commercial buildings in the world after its renovation on Earth Day 2013. 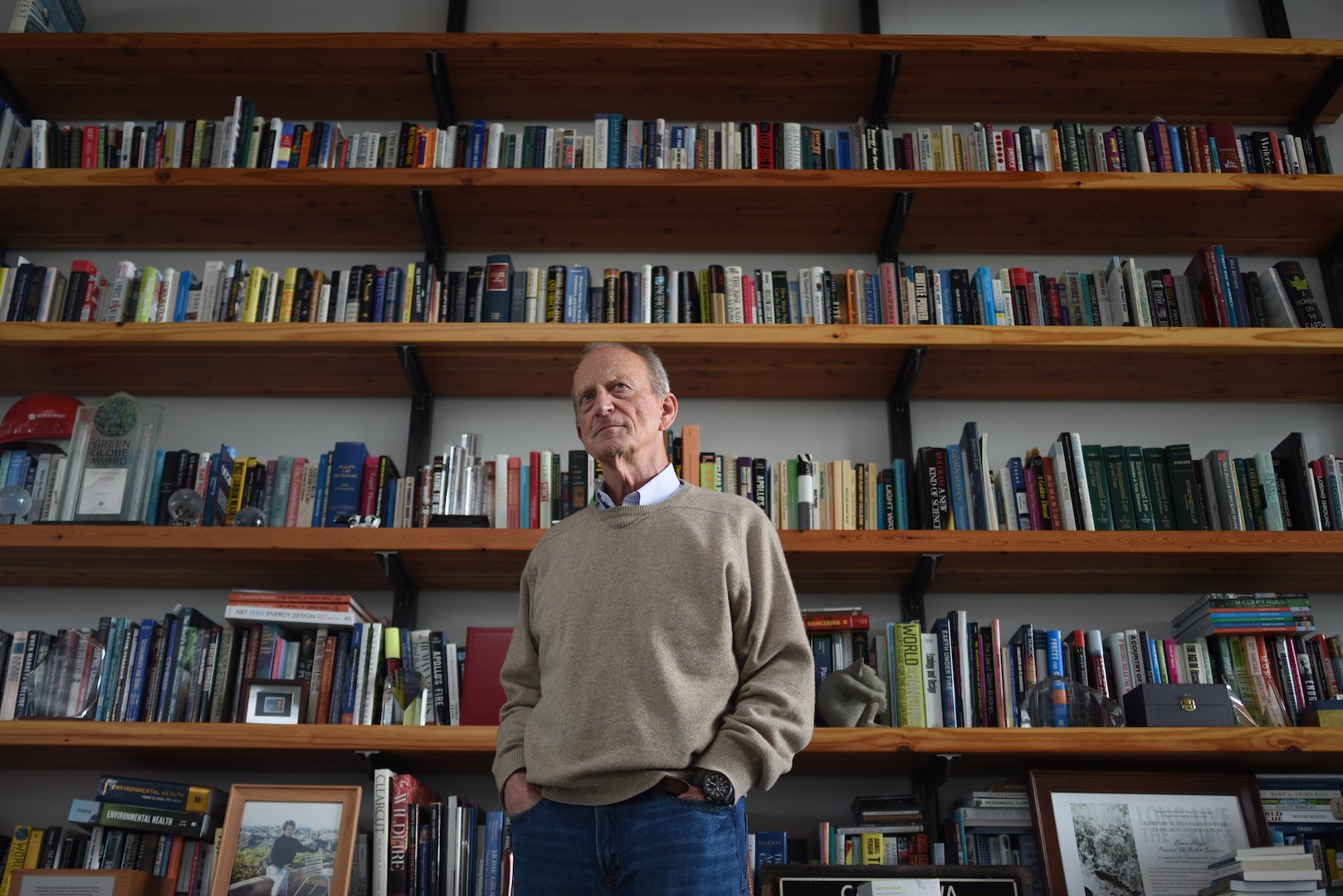 Evidence of Hayes’ lifetime is reflected by his floor-to-ceiling bookshelf lined with hundreds of topics from environmental law to energy storage. Remnants of the fabled ‘70s are brought to life by tangible evidence like the five-foot Madagascar dragon tree, Fred, that Hayes’ wife gave him following Earth Day 1970 when he went to work as director of the Solar Energy Research Institute under the Jimmy Carter administration. Fred lived in D.C. with the couple before they moved to California, where Hayes taught at several universities, including Stanford, and then to Seattle to head the Bullitt Foundation.

Hayes’ resume also includes globalizing Earth Day to 141 countries for 1990 — something he wouldn’t have imagined 20 years before.

“The aspiration was to make it as big and impactful as possible, but there was never going to be an Earth Day 1971,” Hayes said. “In fact, I tried to kill it when I saw little sprouts popping up.”

Hayes said he feared subsequent Earth Days would not live up to the original and would trivialize the environmental movement, possibly even reducing the event to another tacky consumer holiday. Reality exceeded his expectations when the global approach to Earth Day 1990 helped illuminate issues previously unaddressed.

“People had no idea what climate change was,” said Christina Desser, the executive director of Earth Day 1990 and former California environmental lawyer. “Recycling was not something people seemed to care much about.”

Hayes grew up on the banks of the Columbia River in Camas, Washington, son of a paper mill worker who entered the industry at 12-years-old and worked until retirement. From a young age, Hayes said he could feel the toxicity from the town’s monolithic industry.

“I woke up every morning for the first 18 years of my life with a sore throat,” Hayes said. “The mill put out sulfur dioxide and hydrogen sulfide. There was no Clean Air Act; there was no regulation of any kind.”

Sulfur acidity ate through the roofs of residents’ cars but they didn’t realize they were breathing it, too, Hayes said. The mill would dump effluent into the Columbia River, noticeable by the thousands of floating dead fish Hayes would occasionally see while riding his bike. No one protested, Hayes said, and the stink smelled of progress and prosperity.

“As I grew older, I began to think that it has to be possible to make paper without destroying the planet,” Hayes said. “And then that expanded into not only paper but everything else, as well.”

Bullitt Foundation Endowment
The Bullitt Foundation endowed $100,000 to Zero Hour, a nonprofit based on the intersectional movement of youth climate activists co-founded by 18-year-old Seattle activist Jamie Margolin. Zero Hour, founded in the summer of 2017 by teens frustrated with their elected officials, now has chapters from Appalachia to Argentina.

Margolin said she grew up not knowing a time when environmental issues weren’t at the forefront of her mind. It wasn’t until she started environmental mobilization after the 2016 presidential election and met Earth Day veterans like Hayes that she realized the holiday she grew up seeing as an excuse for gimmicky craft projects had revolutionary roots.

“It wasn’t anything meaningful,” Margolin said. “Nobody taught me about the initial Earth Day movement. I didn’t know it was a big protest and that legacy until this year.”

Margolin said she is working to bring those roots back to Earth Day. She works 45 hours per week vocalizing the urgency of the climate crisis — from testifying at the U.S. House of Representatives to suing Washington state and Gov. Jay Inslee for greenhouse-gas emissions.

Hayes, who occasionally meets with Margolin and her father for dinner, said his advice for youth activists is outdated but he said he believes in activists staying true to their values.

The challenges seem greater for the 50th Earth Day, said Adam Rome, an environmental historian at the University of Buffalo. Complexities of combating climate change outweigh more direct problems like cleaning up air and water pollution, he said.

“Stopping some bad things is a lot easier than building a whole new sustainable society,” said Rome. “I think climate change has forced people to realize, more than ever, that it won’t be enough to stop a few things that are harmful. We really have to rethink a lot of our basic institutions.”

Hayes plans to retire this year as the Bullitt Foundation winds down donations that will cease in 2024. The next incarnation of the building will house environmental organizations leased for discounted rent. Fred, Hayes’ 40-year-old tree, will stay.

Since the first Earth Day 50 years ago, Hayes has seen environmental concerns shift from the now-regulated mill that polluted his town as a child, to the U.N. warning of a 2030 deadline to prevent irreversible damage from climate change.

Sometime this spring Hayes will receive an honorary degree from Western Washington University, recognizing his role in the environmental movement. Exactly where he’ll be during Earth Day 2020 remains uncertain. Hayes knows he’ll be part of the mobilizations — whether that’s in D.C., at the largest demonstrations expected in India, or with Pope Francis, who invited him to the Vatican. Hayes is weighing the impact of his carbon footprint as he decides where to be that day. Living with lessons learned, however, he’ll be sure to have more than $12 in his pocket.

For many, the 50th anniversary of Earth Day serves as both a reminder of accomplishments since the mid-20th century and what is left to be done.

Grace McCarthy is a senior journalism student at Western Washington University who uses writing to engage audiences in conversation about environmental issues. Her work has been featured in Austin Monthly magazine, the Blaine newspaper The Northern Light and various student publications produced by Western.