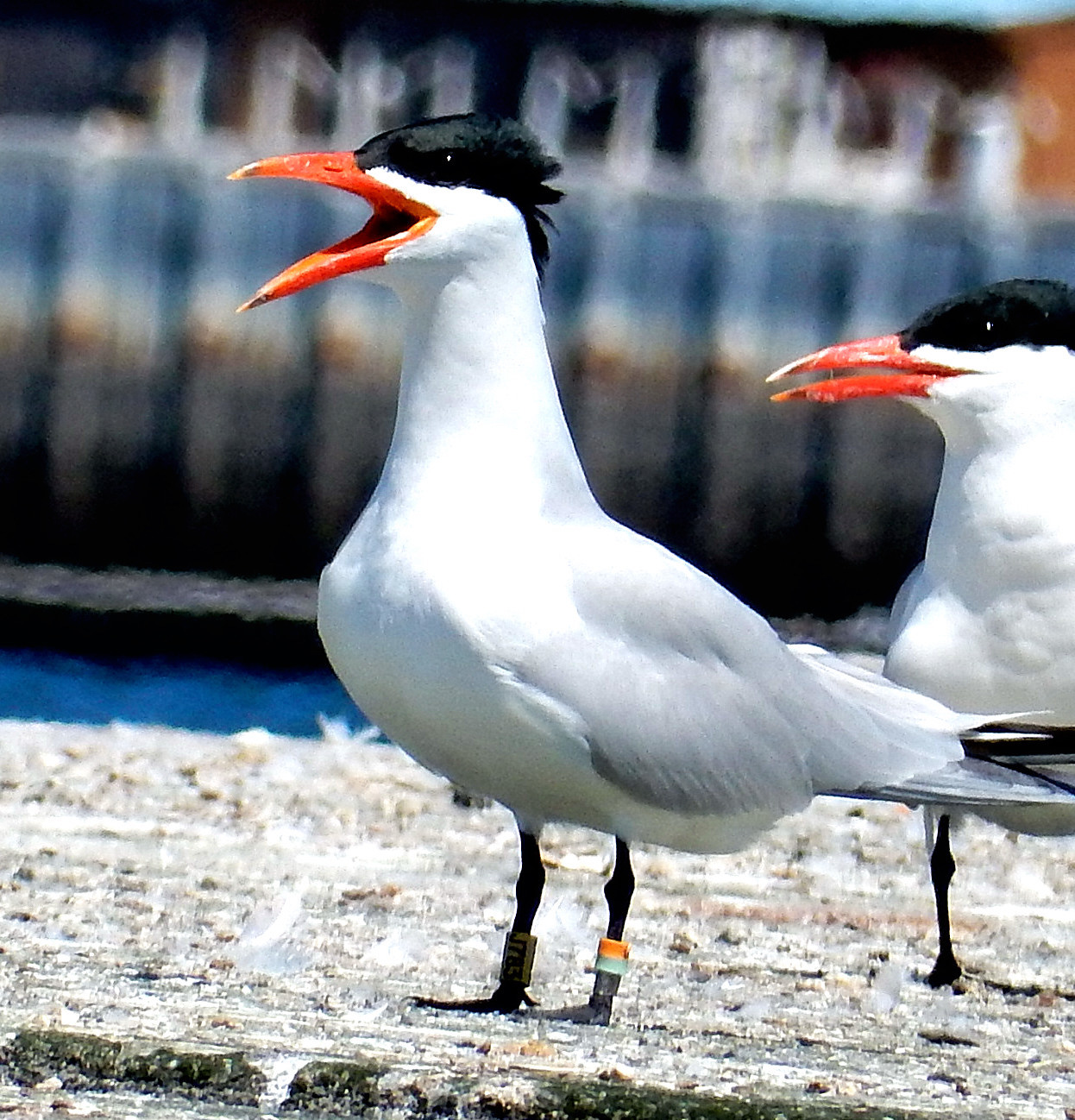 As the calendar rolls into September every year, I tend to wax nostalgic about a variety of odds and ends and even life in general. Summertime is generally a time of year for memorable events lending to the age-old question, “what did you do on your summer vacation?” I never went to Disneyland as a kid, and, for that matter, the extent of family trips consisted of visiting relatives who lived close enough for day trips. One exception was the trip my sister and I took with our parents all the way to Arkansas to pick up my brother from army basic training in 1955. We saw mountains for the first time! As I grew older, I had my own list of summers-to-remember, but a more recent summer stands out in my memory.

In 2010, I had the distinct pleasure of spending four-and-a-half months monitoring the Caspian tern nesting colony at the site of the old Georgia-Pacific pulp mill on the Bellingham waterfront. It was a span of time that ranks high on my personal Top Ten of 75 summers on the planet. I established a real connection with the terns that could only have been possible by spending so much up-close and personal time with the colony. From the first arrivals in mid-April to the last departures in late September, I gained a real appreciation for these magnificent birds.

The Caspian tern is one of the bird world’s most spectacular aerialists. It is the world’s largest tern species, has a wing span of 50-57 inches, and is larger than many gulls. They have long reddish-orange bills, wear a black cap, and the tips of their wings are black. Their calls are distinctive and far from melodious, and have been referred to as a heron-like croak. They feed primarily on fish and their straight arrow-like dives are spectacular to observe. They have been known to fly more than 30 miles from the nesting colony to catch fish. They search for prey mostly on saltwater and occasionally on freshwater lakes as well.

Named after the Caspian Sea where the first specimens were collected, this tern occurs on all continents except Antarctica. In North America, they nest along Pacific, Atlantic, and Gulf coasts. These are heavy birds with broad wings and are often confused with gulls because of their overall size and their flight patterns. When you see a Caspian tern dive after prey, you know immediately that it’s not a gull.

Like many of the other tern species, they nest in colonies and prefer open areas like quiet beaches and islands. Flat areas are perfect since their nests are mere scrapes in the sand or loose gravel. A full 360-degree view is preferred to keep the colony secure from land predators like coyotes and otters. Their primary threats from above come from bald eagles. When a predator approaches, the entire colony erupts to foil the intruder with a noisy, aggressive display of unity. Land predators were not a problem on the waterfront since the entire area was enclosed by two chain-link fences. Whenever I was on site and the colony erupted, I knew to scan overhead for an eagle.

In my position as president of North Cascades Audubon, it was easy enough to put my foot in the door with a plan. After several discussions with the Port of Bellingham, we agreed on a contract that allowed me to access the site to monitor the colony. By the time I began to make regular trips in early May, nesting was well underway and the landscape quickly took on a new life. As the season progressed, the colony size continued to grow with adults sitting on eggs and making food deliveries to the site.

I made contact with representatives of Oregon State University and Bird Research Northwest to let them know about this new nesting colony, which I found to be a significant occurrence. Given the collapse of the large colony on the Dungeness Spit, they agreed and sent a field biologist to meet with me and the port to gain access to the site and assess the situation. Over the time that she and I spent observing the colony, the number of birds coming to the site increased. We did band sightings and found that birds were coming from as far away as the San Francisco Bay area. Apparently, the avian grapevine was active and well.

From our joint observations, it was determined that the Bellingham colony offered a prime banding opportunity, so the wheels were set in motion. A banding team came into Whatcom County and camped overnight at Larrabee State Park, where we had a pre-banding meeting to discuss strategy. On a chalkboard, the plan of attack looked similar to a Civil War battle plan. Our team met on the morning of July 30 to put the plan into action. In a very short period of time, we had banded 252 chicks, all 4-5 weeks old. It was a sometimes chaotic but very efficient operation. As we surrounded the colony to collect the chicks, every adult was in the air, dive-bombing and scolding in their inimitable way. After banding, weighing, and measuring, all the banded chicks were returned to the colony and relative calm returned. There were no mortalities related to the banding.

I continued monitoring the colony through August and into late September, as the chicks that we had banded became fledglings and left the colony. I saw their first flights as a series of orientation trips for the young birds, always accompanied by a parent bird leaving and returning to the site. The last birds to fledge were still on the site on foggy, late September mornings. My final trips to the site were to do carcass counts which, as you can imagine, were not gleeful.

In spring of 2011, I was invited to attend a meeting at the port office. I had great aspirations to capitalize on this found resource and thought about the long-range potential of setting aside part of the site as a tern nesting refuge. With this in mind, I put together a presentation for the port, which included a full report of the numbers that reflected the success of the colony. Alas, the port had other plans for the waterfront, and let me know in no uncertain terms that they were not in the business of “wildlife management.”

Despite the fact that the port basically put an end to any dreams I had about providing a long-range nesting site for these magnificent birds, I still have good feelings about my summer of 2010. I learned a lot about the behavior of the terns and welcomed visitors from as far away as Spokane who came to view the spectacle. Sightings of the terns have been sporadic on the waterfront this summer, and I miss seeing them and hearing their distinctive calls.
______________________________