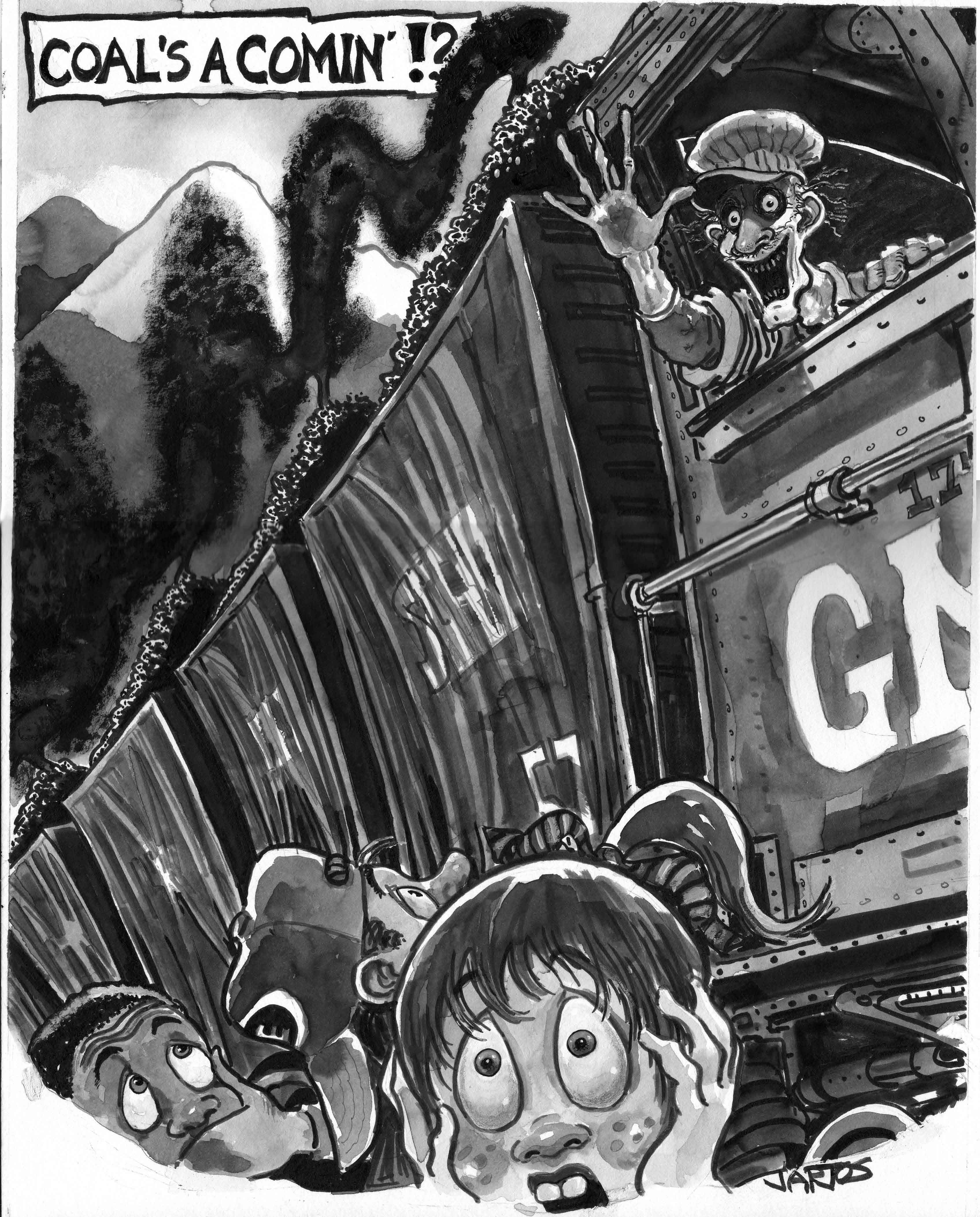 This illustration by George Jartos accompanied our first article by Preston Schiller on the proposed coal port at Cherry Point. It appeared on the front page of the April 2011 issue.

George Jartos, a cartoonist who for years enlivened Whatcom Watch with his drawings and sense of humor, died October 19, 2016, of unknown causes at his Railroad Avenue apartment in downtown Bellingham.

Jartos’ work appeared everywhere from Playboy to Reader’s Digest, and at the height of his fame he was a syndicated newspaper cartoonist. Jartos, 74, was a common sight in downtown Bellingham, typically wearing shorts whether it was hot outside or below freezing. His cartoons featured such things as motorcycles and the biking culture for Easyriders magazine, but most of his work involved joke cartoons.

Jartos had been hospitalized for foot surgery. After rehab, he returned to his apartment and on Tuesday, October 18, 2016, he was at home and had visitors, they reported. He was found dead the following day.

Before retiring, Jartos was a prolific cartoonist and illustrator. His work appeared on greeting cards and in such publications as Reader’s Digest, Better Homes & Gardens, Penthouse and The Wall Street Journal. He also did hilarious illustrations for Whatcom Watch that exhibited his unusual sense of humor.

Despite his success, drawing cartoons and illustrating was not Jartos’ first choice of professions, he told Emily Hamann in an interview in the Bellingham Business Journal in May 2016. “I was doing sculpture, but I knew I could never make a living at it,” he said. He’d always been good at drawing, so he switched to cartooning.

His talent helped him when he was in the military deployed to Korea. He started doing gag cartoons for a newspaper that was handed out to the troops. After that, he began illustrating, drawing art for advertisements, logos, pamphlets and posters. He illustrated a textbook for a French teacher at Western Washington University and began drawing for Whatcom Watch.

With the decline of newspapers, much of his business tapered off. At the same time, most magazines stopped using illustrations as well, and since the advent of the Internet cartoonists such as himself struggled to find a business model that works, he said.

Jartos never fully retired but kept drawing cartoons until the end, often submitting them to The Wall Street Journal. He will be missed not only for his artistic abilities but for his unique and daring sense of humor.