Bridging Past, Present and Future

by WPJC Board (see photo) 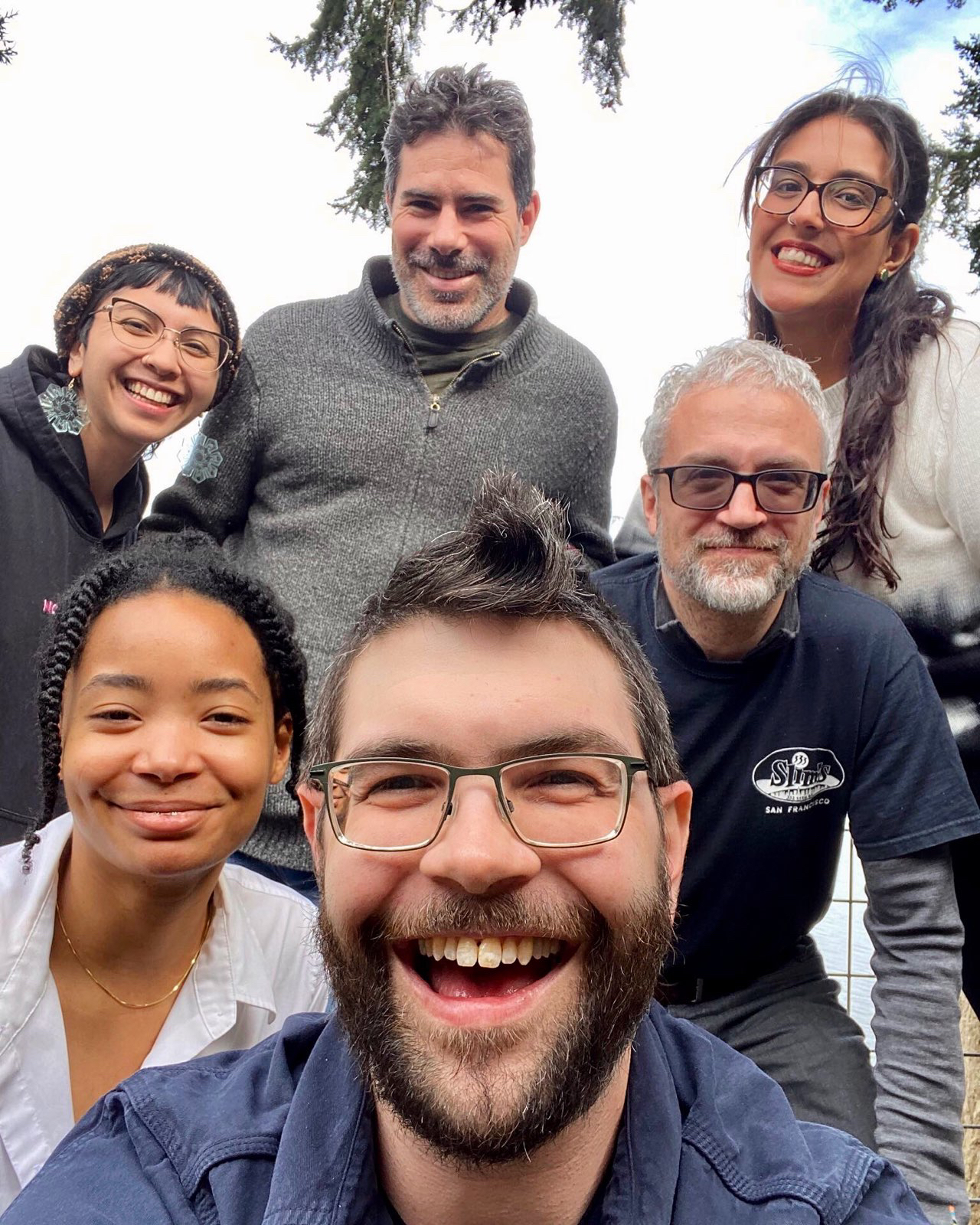 In downtown Bellingham, on Bay Street, resides one of the true gems of the Pacific Northwest. Hidden behind an array of colorful, defiant posters plastered on its high windows, and accessed via an unassuming door to the side of the building, the Whatcom Peace & Justice Center (WPJC) has faithfully served Whatcom County for 20 years.

Established in 2002 by participants of the Bellingham Peace Vigil, the nation’s longest-running weekly peace vigil (1967-present), the WPJC was formed to address U.S. aggression overseas, specifically against the people of Afghanistan and Iraq. It partners with local community and religious organizations, cultivates direct action, public witness, and education on alternatives to violence and war, as well as promotes nonviolence as a way of life. 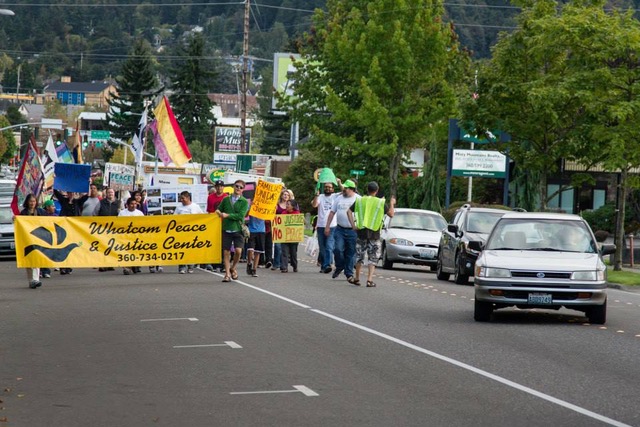 To celebrate WPJC’s 20th anniversary, Vice President of its Board of Directors Yoav Litvin spoke with several WPJC Board members about the center’s past, present and future.

Yoav Litvin: Please provide a brief introduction on the injustices committed in our county. What is the history of militarization here?

Josh Ceretti, WPJC Secretary, Associate Professor at WWU, Interim Director of Women, Gender, and Sexuality Studies: Militarism has been the handmaiden of white supremacy here — the same forces that displaced Lummi and Nooksack people from their native land refused to protect Black and Asian people when white vigilantes sought to force them from town. The militarization of Whatcom County began in earnest in 1856 when the U.S. Army arrived to build Fort Bellingham on territory that had been Coast Salish since time immemorial. In the late 19th century, with the advent of the Border Patrol, militarism extended out to every edge of Whatcom County. Decades later, despite its progressive reputation, the area still has businesses that make millions of dollars off of Department of Defense contracts, surplus military equipment held by the sheriff’s office obtained through the controversial 1099 program, and the constant presence of the paramilitary Border Patrol in our daily lives.

Yoav Litvin: As its longest serving Board member (since 2010) and current President, how did you initially find the center? Provide some examples of activities you’ve been involved in over the years.

Matteo Tamborini, WPJC President:
I found the WPJC the day I moved to Bellingham, when I drove through downtown and witnessed the last day of a weeklong anti-Iraq war vigil. The WPJC has offered a host of services for individuals and groups interested in expanding their political involvement: from providing a safe space for people to connect, as in the case when racist threats were made against the ASWWU President in 2015, through supplying personnel to serve as police liaisons, to offering logistical and organizing support for large events such as the March for our Lives in 2018.

The WPJC has been a source of support for many — and it continues to do so thanks to the contributions of the Bellingham community. The work has also taken the form of participating in the creation of the Whatcom County’s Veterans’ Navigator program back in 2010 and support for the building of a tiny home as part of the HomesNow campaign to provide housing for our homeless neighbors. Most consistently, we have worked to provide the youth of Whatcom County with Alternatives to Military Service.

Yoav Litvin: What is the importance of maintaining a storefront for the WPJC in downtown Bellingham? How does the space reflect on the goals of the WPJC?

Aline Prata, WPJC Executive Director:
We provide a space dedicated to transnational solidarity and social change in our region aimed at connecting to transform. We bridge knowledge to practice, and past, present and future struggles across ages and geographies in a border town residing on occupied land — from the hyper local to global movements for peace and social justice. Our very own storefront office, its maintenance and access are an example of that daily battle. To guarantee a community space principled in nonviolence, grassroots intersectional feminism and anti-racism in the middle of downtown Bellingham for 20 years is a constant battle and a daily geographic, ideological and political win.

In the words of the late Edward Said: “Just as none of us is outside or beyond geography, none of us is completely free from the struggle over geography. That struggle is complex and interesting because it is not only about soldiers and cannons, but also about ideas, about forms, about images and imaginings.”

Yoav Litvin: How do you bring your life experience and expertise to the work at WPJC?

Kat David, Licensed Mental Health Counselor, WPJC Treasurer:
In my six years as a therapist in community mental health, it became increasingly clear that this healthcare system often focuses on addressing individual symptoms rather than our collective issues, and perpetuates the shame and punishment inherent in our carceral system. With the rise of folks seeking mental health services and with ongoing tragedies, it is hard to imagine this is working. Yet, there could be another way.

I’m very hopeful and excited for WPJC’s new Transformative Justice Learning Lab, where we look for different approaches to change. In this budding space, we hope to refocus our attention and care on how we can build stronger relationships of trust and accountability, and hope to explore how to strengthen community care, aid and joy. We envision this new project as an incubator where we will learn to navigate conflict into collaboration, address our personal and collective needs, and can come together in communion, rather than in fear. Stay tuned for some opportunities to cocreate and co-learn with us!

Eve Smason-Marcus, Board Member:
I recently started working for Northwest Youth Services as a case manager, and, unsurprisingly, it has only deepened my commitment to learning and living abolition. Every day, I witness the young people I work with face barrier after barrier in retaining safe housing, accessing social services, and navigating the carceral systems embedded in Whatcom County.

As an abolitionist, I practice daily the hope of creating a world that replaces prisons, police, and carcerality with systems of collective care, love, and understanding. For me, abolition is rooted in dreaming and the collective wellbeing of all of us. Working with Kat to bring the Transformative Justice Learning Lab to our community has been such a joy, and I am excited to see how it will change and morph over the next few months as we begin exploring together.

The Transformative Justice Learning Lab will be a loosely structured space of imagination and cultivation as participants bring their own expertise and experience to the table to cocreate a community accountability process that centers healing and liberation, an authentic opportunity to actualize abolition within Whatcom County

Destiny Dunbar, Board Member:
Growing up as part of a U.S. military family and having lived on military bases for most of my life, I’ve experienced the constant uprooting and separation it brings, in both moving and family deployment. As I continued to move within military communities, however fleeting, I noticed the familiar psychological shadow the military casts on the people inside of it.

Living in and learning the history of Hawaii, a previously independent nation whose government was violently occupied, overthrown, and annexed to the United States, gave me insight into the harm imperialism causes on members of the military, as well as the disproportionate harm and attempted destruction it brings to the often Black, Brown, and Indigenous peoples of the receiving country. Being on the WPJC Board has allowed me to deepen my analysis and bring my experience full circle by imagining alternatives to the destructive cycle.