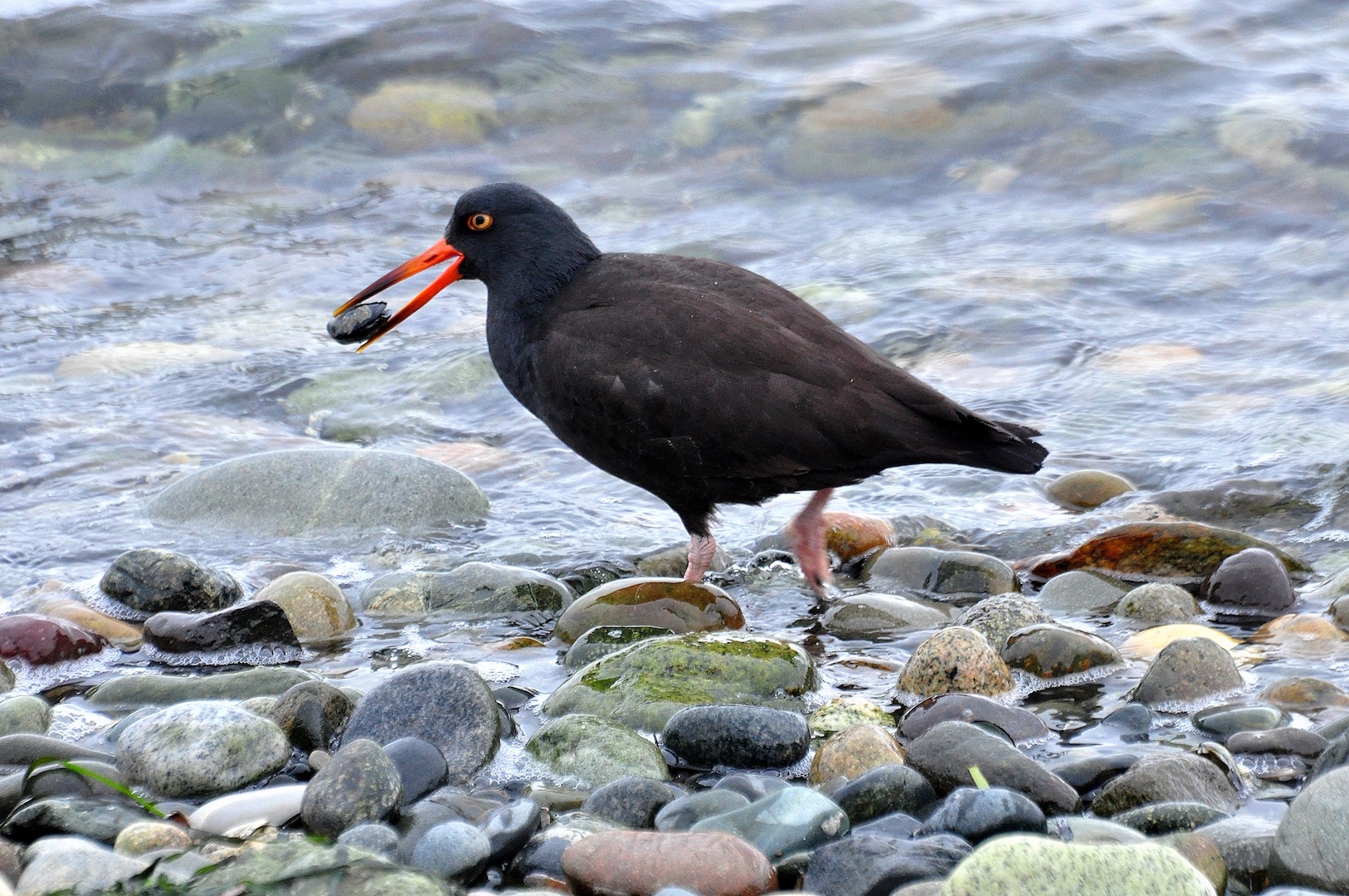 It’s been a while since we celebrated Cindy’s birthday with a getaway, so this year I decided to take her someplace she’s never been. For that matter, I had never been to the Fidalgo Bay Resort, either. I heard about the Tommy Thompson Trail (TTT) from a friend, and, in the process of checking out the trail, I found the resort to be a perfect base for our getaway. It was also one with lots of birding potential. As the name implies, it sits on the southern end of Fidalgo Bay, just down the road from the bird-rich environs of the “greater” Anacortes area. Given Covid-19 protocols and the wild weather we’ve been having, not to mention the desire not to travel too far from home, this was a perfect fit.

As it turned out, our cabin was perfectly situated and right on the TTT, a paved 3.3 mile trail for pedestrians and bikes that goes all the way into the heart of Anacortes. The trail follows the shoreline all the way and is also wheelchair-accessible, should the need arise. Since it wasn’t really biking weather, we knew that with proper rain gear we could walk onto the causeway that stretches into Fidalgo Bay or walk into Anacortes if we wished. We set aside one day for a motor loop to take in all the places I knew about from past experience.

For several years in the not so distant past, I volunteered annually for a stint on the Skagit Audubon Society’s Fidalgo Bay Christmas Bird Count (CBC). My territory on those CBCs focused on a large area that included most of Anacortes. I had certainly been to Anacortes before, usually on the way to the ferry and knew it fairly well. However, there’s nothing like a CBC to open your eyes to the intricacies of a place you knew only from the main roads. When you cover side streets and alleyways you take roads that are less frequently traveled. My territory on these counts was rather large in the overall scheme of CBCs, but I always accepted the challenge and discovering new places was a real treat.

On our motor loop day, I thought we could include most of the places that I covered on the CBCs but certainly at a more relaxed pace. Just down the shoreline from our cabin was our first stop at the Cap Sante Marina, one of the more picturesque marinas in the state. Part of the appeal of this area is rocky, forested headland that rises above the marina and includes Cap Sante Park. Hiking trails are available from the marina to the top, but, since we planned a long loop for the day, we decided to drive.

This headland was once known as a “high tide island” and was separate from Fidalgo Island. The marsh that existed between the two was renowned as a haven for ducks and other waterfowl, especially in the winter months. Sometime around 1896, it was decided to fill in the marsh and make room for future development. The development included expansion plans for the Cap Sante Marina. Today it’s difficult to imagine the marsh that was there at one time, though I would like to have seen the waterfowl. Still, the headland and the park offer spectacular views of the North Cascades and Mount Baker, as well as Mount Rainier on a clear day!

In winter, the protected waters of the marina provide refuge and good foraging possibilities for loons and grebes, as well as common and Barrow’s goldeneyes. The development around the marina segues seamlessly into the commercial district of Anacortes. The working waterfront of Anacortes begins at the foot of Commercial Avenue and a winding switchback road follows the shoreline with excellent views of the Guemes Channel. This channel offers a great variety of birds like loons, cormorants, common murres, and pigeon guillemots. The channel is also a good place to spot the less common marbled murrelet and rhinoceros auklet.

In the past several years, Anacortes has grown at a rapid pace and the places where I used to stop to count birds are now residential neighborhoods! The San Juan Islands Ferry Terminal has always been a great stop, for birds and for views. The good news here is the new Guemes Channel Trail follows the shoreline for most of the way back to the Guemes Island ferry landing and eventually all the way into town. Great views of the channel and the marine species are augmented by numerous passerine species in the wooded areas along the way. The wetland next to the terminal has numerous great blue herons nesting on the site in early spring.

Just down the road from the terminal is Washington Park, one of the finest city parks in the Northwest. This forested headland is similar topographically to Cap Sante Park and offers exceptional views of the San Juan Islands, hiking trails, and a campground. The motor loop around the park has many pullouts for picnics or better scoping for birds in Rosario Strait. Black oystercatchers often patrol the cobble beaches and bald eagles are frequently seen riding thermals on the perimeter of this peninsula. My CBC territory officially ended at the park boundary, but we weren’t on duty on this particular day.

On the way back to Anacortes, a visit to the Skyline Marina shows the results of a designed waterfront community. The marina was built to handle the overflow when the demand for moorage space exceeded the capacity of Cap Sante. It was at this marina where I observed two of the first black oystercatchers recorded in the area, which preceded the eventual increase of their numbers in northern Puget Sound.

When I started doing the CBC here, I was delighted to find that Little Cranberry Lake was in my territory. I had only heard about it in passing, but the CBC provided my first opportunity to see it firsthand. On count days, I walked the perimeter trail around the lake and added to my list with woodland species and waterfowl, including barred owls, hooded mergansers, and wood ducks. This lake and the larger Heart Lake are part of the Anacortes Community Forest Lands which have been set aside to conserve and preserve rather than develop. The heavily forested landscape eventually leads to Mount Erie, the highest point on Fidalgo Island at just over 1,200 feet above sea level.

This entire loop took us back to our cabin on the shore of Fidalgo Bay where we hid out from the rain and indulged in one of our favorite getaway activities … spirited games of Scrabble! As I alluded to a column from last year, the area around Anacortes is certainly close to home and offers a great variety of birds for a day trip … even for non-birders. A 35-mile drive is a relative piece of cake for a good day of birding or just for exploring and getting to know Anacortes.