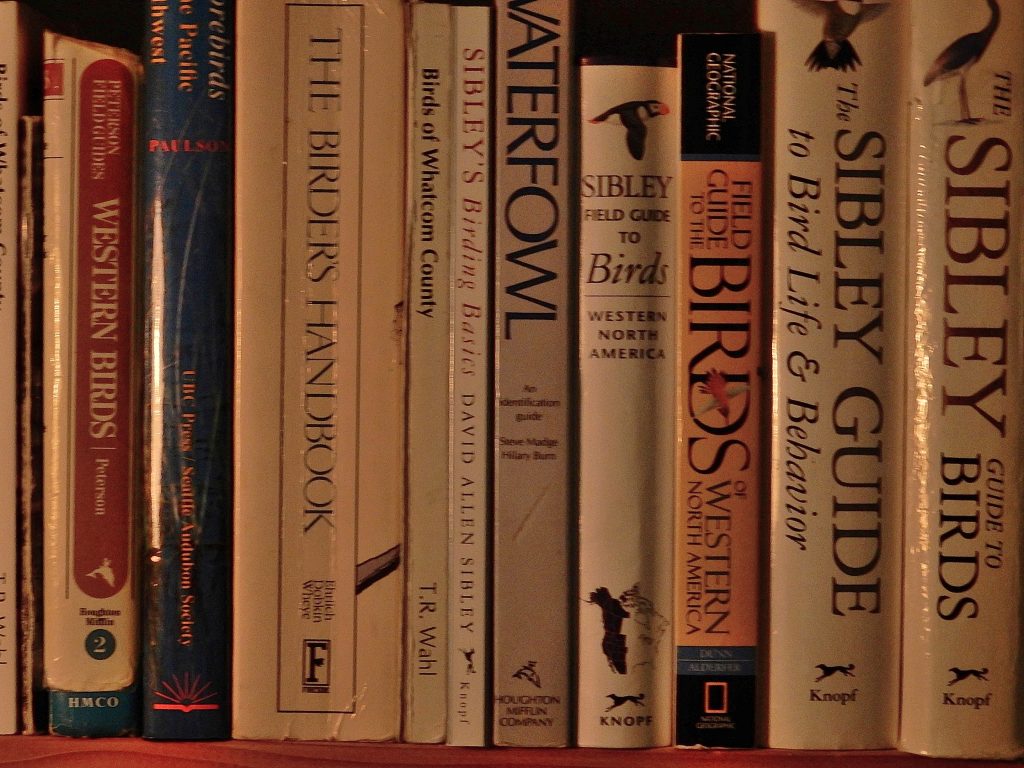 Over the past fourteen years that I’ve been writing this column I’ve fielded a number of queries about books that go beyond basic field guides. Our tried and true, field-tested guides are an important part of everyone’s essential gear; however, they are meant primarily to be used as educational tools to assist in field identification and to foster an awareness of the variety and distribution of birds. Field guides are available for practically every continent and come in an assortment of sizes and depth. The queries have come because many birders want to see more personal approaches to learning more about birds.

In the process of moving over the past couple of years, I’ve had occasion to pack and unpack some of my personal favorites. None of the books that are listed here are field guides, per se, but are still learning tools for birdwatchers. These are books especially for those who are interested in new ways to look at birds or seeking information about birds that field guides just don’t have room to offer. This list is in no particular order of preference but intended merely as a cross-section of odds and ends that are as entertaining as they are informative. From my own library I’ll offer this handful of books about birds for your consideration. (Titles with an asterisk are available at local libraries.)

The Dictionary of American Bird Names
by Ernest A. Choate
261 pages, Gambit, 1973

This is the book to consult if you ever wonder about the name of a particular bird. In general, it’s easy enough to understand how woodpeckers got their names, but why is one called a pileated and another a downy? Why does the Caspian tern have a name whose origin is on the other side of the world? Author Ernest A. Choate unravels the mystery surrounding bird names in this tidy little package that should be part of every serious birder’s library. In addition to the common and scientific names of our birds, there’s a special biographical appendix that provides the names of all the early naturalists who made significant contributions to the field of ornithology.

This book was written by Arin Murphy-Hiscock, a third-degree Wiccan High Priestess, so it’s no surprise that the pages are filled with cultural myths, folklore, omens, and divinatory meanings of certain birds. As long as humans and birds have interacted, the arrival or presence of certain birds has had symbolic connotations. Each of the common species detailed in this book has a unique story and might change the way you perceive birds in the future.

The Big Year*
A Tale of Man, Nature, and the Fowl Obesssion
by Mark Obmascik
268 pages, Free Press, 2004

While the movie version of this book was geared toward comedy — especially with a cast led by Steve Martin — the story delves into the often manic obsession of a trio of birders who attempt to set a record for the number of birds seen in one year in North America. This narrative follows their avian pursuits from January 1 to December 31 and shows the extraordinary lengths to which competitive birders will go to be called the best. It makes for interesting reading but their pursuit is not something I wish to emulate.

In the Company of Crows and Ravens*
by John M. Marzluff and Tony Angell
384 pages, Yale University Press, 2005

If, like me, you’re fascinated by these members of the worldwide family of Corvids, this is a must read. Written by John Marzluff and wonderfully illustrated by Tony Angell, this volume is certain to add to your understanding and appreciation of what many consider to be the most intelligent of all birds.

I have often referred to this book as one of my all-time favorites, primarily because it focuses on one of the less appreciated groups of birds. In my Beaks and Bills column in the July 2016 issue of Whatcom Watch, I readily admitted to enjoying gulls, and it appears that I have an ally in Frank Graham, Jr. You will not read a more in-depth and sympathetic profile of gulls and especially their relationship with humans. Mr. Graham doesn’t pull any punches when it comes to pointing the finger at the most destructive animal on Earth — man.

A World of Watchers
by Joseph Kastner and Louis Agassiz Fuertes
241 pages, Knopf, 1986

As the title suggests, this interesting read is more about the history of the humans who watch birds than it is about the birds themselves. Joseph Kastner chronicles the tradition of watching birds in America. From the earliest watchers to Rachel Carson and the beginning of the conservation movement, birds have played an important part in the lives of many people from various walks of life. Additional bonuses to this book are the illustrations from renowned artist Louis Agassiz Fuertes.

A Bird in the Bush
A Naturalist’s Guide to Watching Birds
by Don Alan Hall
Words & Pictures Unlimited, 1986

More of a how-to guide than anything else, this compact book written by Don Alan Hall offers tips on everything from getting started to the pleasures of bird watching, and how amateurs can contribute to wildlife conservation. Those who watch birds play an important role in the future of the planet, especially when you consider that birds are our best barometers for changes in the environment. Equipment, field guides, habitats, listing, and seasonal birding – it’s all covered here in a very entertaining way. The book is also specific to the Northwest so you’ll feel right at home as you read.

The Joy of Birding
A Guide to Better Birdwatching
by Chuck Bernstein
201 pages, Capra Press, 1984

This anecdote-rich book was written by Chuck Bernstein, a passionate, lifetime birder. Bernstein shares his own tips on numerous topics, including migration, bird songs, and identifying young birds in well written accounts of bird watching trips around the country. His stories are laced with humor that allows us to chuckle at the collective behavior of birdwatchers. You might even see yourself in some of his descriptions.

An Exhilaration of Wings
The Literature of Birdwatching
by Jen Hill
252 pages, Viking, 1999

Author Jen Hill remarks in her introduction that bird watching is “an experience of the ears and intellect as much as it is of the eyes.” She collected some of the finest writings about birds by such notables as John Muir, William Wordsworth, and John James Audubon, focusing primarily on well known observers. Many other names will be familiar and even though most of the accounts are from the nineteenth century, she also offers an occasional glimpse into the seventeenth and eighteenth centuries. Bird watching isn’t something new, since people have been watching birds for as long as we’ve both been around.

John James Audubon*
The Making of an American
by Richard Rhodes
514 pages, Alfred A. Knopf, 2004

Written by Pulitzer Prize Winner Richard Rhodes, this biography was the first to fully delve into the private life of America’s foremost illustrator of birds in the natural world. From his arrival in America in 1803 to his death in 1851, this book will leave little to the imagination about the life of a true icon. With sixteen pages of color plates, eighty-five illustrations, and four maps you can follow the evolution of one of the preeminent wildlife artists of all time — a man whose name has become synonymous with birds and wildlife conservation.

For relaxed, enjoyable reading if you’re interested in birds, put aside a few non-field guide books to further your interest and appreciation of our feathered friends. For those days when the weather is too foul (fowl) or if you’re just unable to get outside, a good book about birds will help to pass the time. You can still say that you’re “birding” even if you don’t leave the house. It’s difficult to think about cold winter days from the perspective of August, but they will come.
______________________________