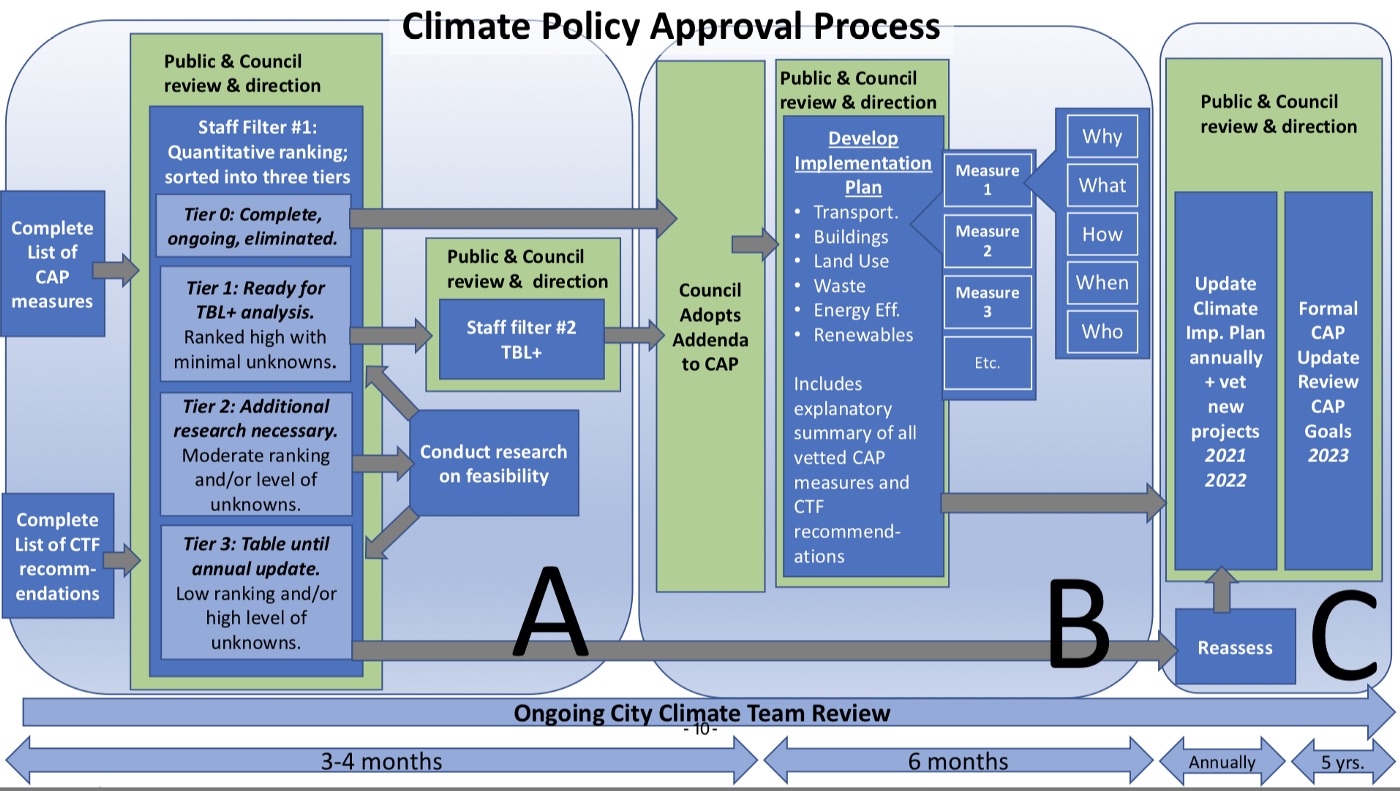 The 2018 Climate Action Plan identified 145 actions that the city of Bellingham could take to reduce carbon dioxide emissions. The goal of the Climate Policy Approval Process is to filter the list of actions, evaluate and prioritize them, and adopt the best ones formally as city policy.

The first filter, part of Phase 1, analyzed the impact of all 145 actions on four broad factors: Legislative, Funding, Planning, and Return on Investment. Each of the four factors was posed in the form of a question, and, based on the responses, actions were assigned numerical values, ranked quantitatively, and assigned a tier that describes their readiness.

Ten actions that ranked the highest were assigned to Tier 1, which means they are identified as ready for a more in-depth analysis. The actions draw from the areas of energy efficiency, renewable energy, transportation, and planning.

Vidaña also outlined how the public can be involved. The information presented on June 8 will be shared on the city website and anyone who wishes to participate in the legislative process can do so by public comment at a City Council meeting or in a written comment to City Council by emailing ccmail@cob.org.

Councilmember Lilliquist expressed gratitude and relief to be at this stage in the process and support for staff’s list. “You know I had a gut idea of the ones I thought would be best and this list does indeed include all of those. So, I think it’s a really formidable list, a good list, probably the right list. So, go ahead, I’m supportive.”

Lilliquist also inquired about number five on the Tier 1 list, “City and Puget Sound Energy Evaluate Community-Wide Green Direct” and number two on the Tier 2 list, “Conduct a Feasibility Study for City Municipal Utility District with Mandate to Procure 100 Percent Renewable Energy.” Lilliquist said, “One way the Green Direct could work is by partnering with the Public Utility District (PUD), and I personally am not enthusiastic about the idea of creating another public utility district, a municipal one, if the Whatcom County PUD can play that role.”

LaCroix replied that the city is working with the Whatcom County PUD to conduct a feasibility study to understand if they can provide renewable energy to Bellingham retail customers. Lilliquist later added, “If our goal is to create new renewable energy to replace fossil fuels, and one of these utility ideas doesn’t get us there, then it shouldn’t be on this list …”

Councilmember Stone had a question about what actions or measures have been excluded from consideration. “Tier 0 mentions that those are projects that have been our measures that are completed ongoing or non-priority … and I’m just curious with respect to non-priority … what some of those determining factors were and if there are some examples of what’s been deemed a non-priority.” There were nine actions in that category. Several pertained to diesel and biodiesel, an outdated technology. Others were about joining other organizations that promoted emissions reductions and staff said they feel like the city is already on a pathway to do that.

Councilmember Hammill asked what the source of revenue for the Carbon Fund would be. Vidaña said that’s “yet to be determined. We’ve looked at grants and potential carbon taxes … . We might look at how other cities are funding these items.”