Bellingham Marches for Our LIves 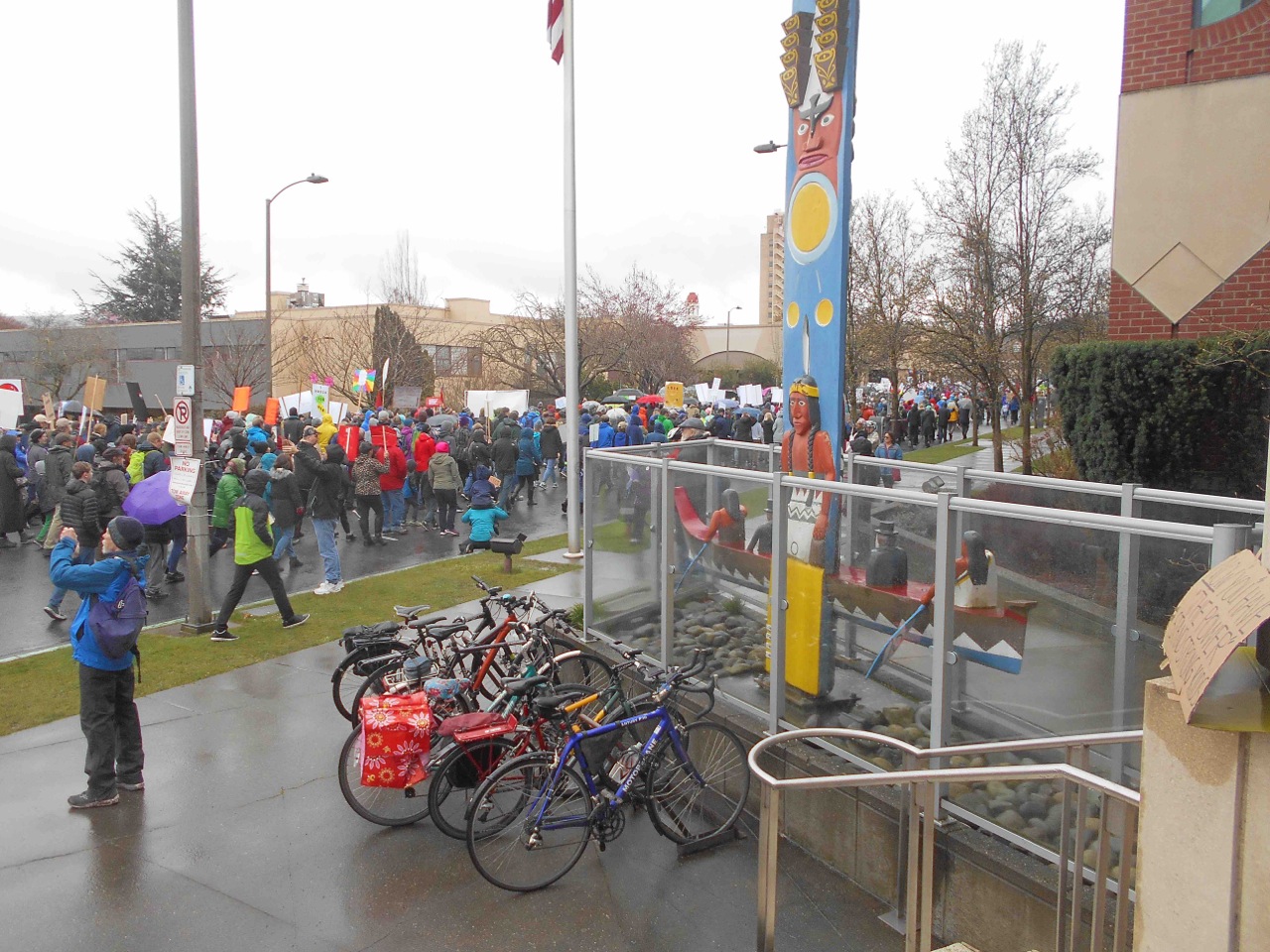 On the morning of March 24, I boarded the WTA Route 1 bus at Fairhaven Station en route to the March for Our Lives event at City Hall, and there were only two other passengers on board — a couple of my fellow older generationers with signs sloganed for the march. When we reached downtown a few minutes later, though, there were no fewer than 24 of us grey-haired ones headed to the march plus a few others who may or may not have been headed there. Usually the WTA 1 only has passengers waiting to board at about half or fewer of its marked stops. That day there were passengers waiting at almost every stop.

Despite the rain and cold, a huge crowd had mustered in front of City Hall. From Girard to Grand the plaza was filled, the street was filled, the large open area between Lottie and the back of the library was filled. High school students, yes, but also younger students, parents of youngsters ranging from infants in prams to toddlers, elementary schoolers and middle schoolers; and many persons of ages one might associate with grandparenthood. A group of all ages, many visible ethnicities, workers and professionals, all standing in the rain listening and then marching accompanied by many wet and mostly cordial dogs.

The Bellingham Police Department estimated the crowd size at 3,000, although they probably did not add in the many dogs. I did not see anyone along the route taking a count. I would have pegged the crowd size higher; the anti-coal terminal rally with Bill McKibben, which filled Fairhaven’s Village Green to overflowing a few years ago, numbered about 1,200. The March for Our Lives gathering seemed larger than three times that size. Unfortunately, the Whatcom Democrats found themselves unwilling to adjust their county convention agenda that morning to add their numbers to, at least, the opening of the event. Perhaps that is why I didn’t see any elected officials from the city or county participating.

I stepped out of the march a few times to jump forward or hang back to observe, take photos and do my own estimates. It seemed that the march stretched over about 10 downtown blocks, with some of the blocks of marchers tightly packed, others less so. Watchers on the sidewalks and persons who came out of stores and cafes cheered the marchers on. A couple of young men I encountered were not sympathetic and scurried away to avoid the march. One muttered the tired NRA mantra, “Guns don’t kill people, people kill people.”

The whole community, in agreement on the issue of tighter gun regulations or not, owes the local high school students who organized and led the event a big thank you and a great deal of respect. They took up this issue quickly in the wake of the Marjorie Stoneman Douglas High School massacre in Parkland, Florida, and rapidly organized one of the largest protest demonstrations in recent Bellingham history, dwarfed only by the Women’s March of 2017. Aided by the Whatcom Peace and Justice Center, the students jumped through many hoops to get a permit and deal with other necessities of the day — getting a loudspeaker system set up, organizing a rearguard crew for litter cleanup, etc. 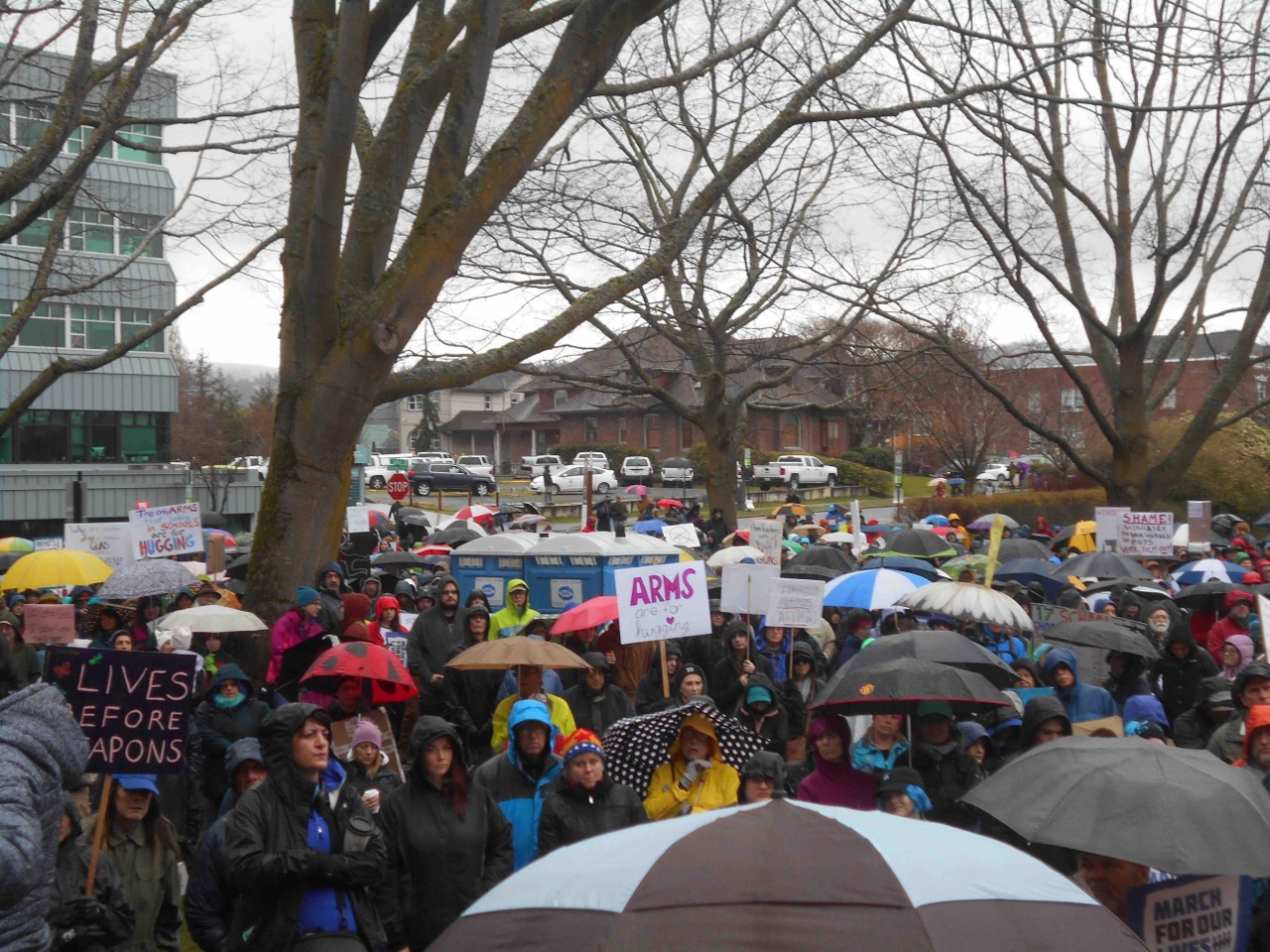 The event opened with a moment of silence honoring the indigenous people on whose stolen land we were gathered. Then followed several short, well done and meaningful speeches almost all delivered by students from each of Bellingham’s high schools. The march was peace filled and orderly. The march ended back at City Hall with the crowd singing “We Shall Overcome.” The event was an excellent example of how a peaceful, respectful gathering of citizens, young and old, can forcefully advocate for a cause.

I hope that Marching for Our Lives did not end at Bellingham’s City Hall on March 24. I hope that the students involved will carry this issue and their dedication forward into their lives beyond high school. I hope that more than footprints have been left behind and more than memories are taken from that day. I hope that day’s spirit became well anchored in the hearts of the young marchers, and that they remember the lessons of peaceful protest as powerful advocacy as they pursue their missions in life and foster a more caring, protective and inclusive society. I hope they will reach out and reach down to siblings, students in lower grades and kids on the block to keep the spirit of March 24 refreshed.

March 24 has passed, but the issue is far from over. I hope that all involved will add their energy to local efforts to eradicate gun violence, to state efforts (The legislature is hopeless on this issue; an initiative is needed) and to national efforts from laws to boycotts. 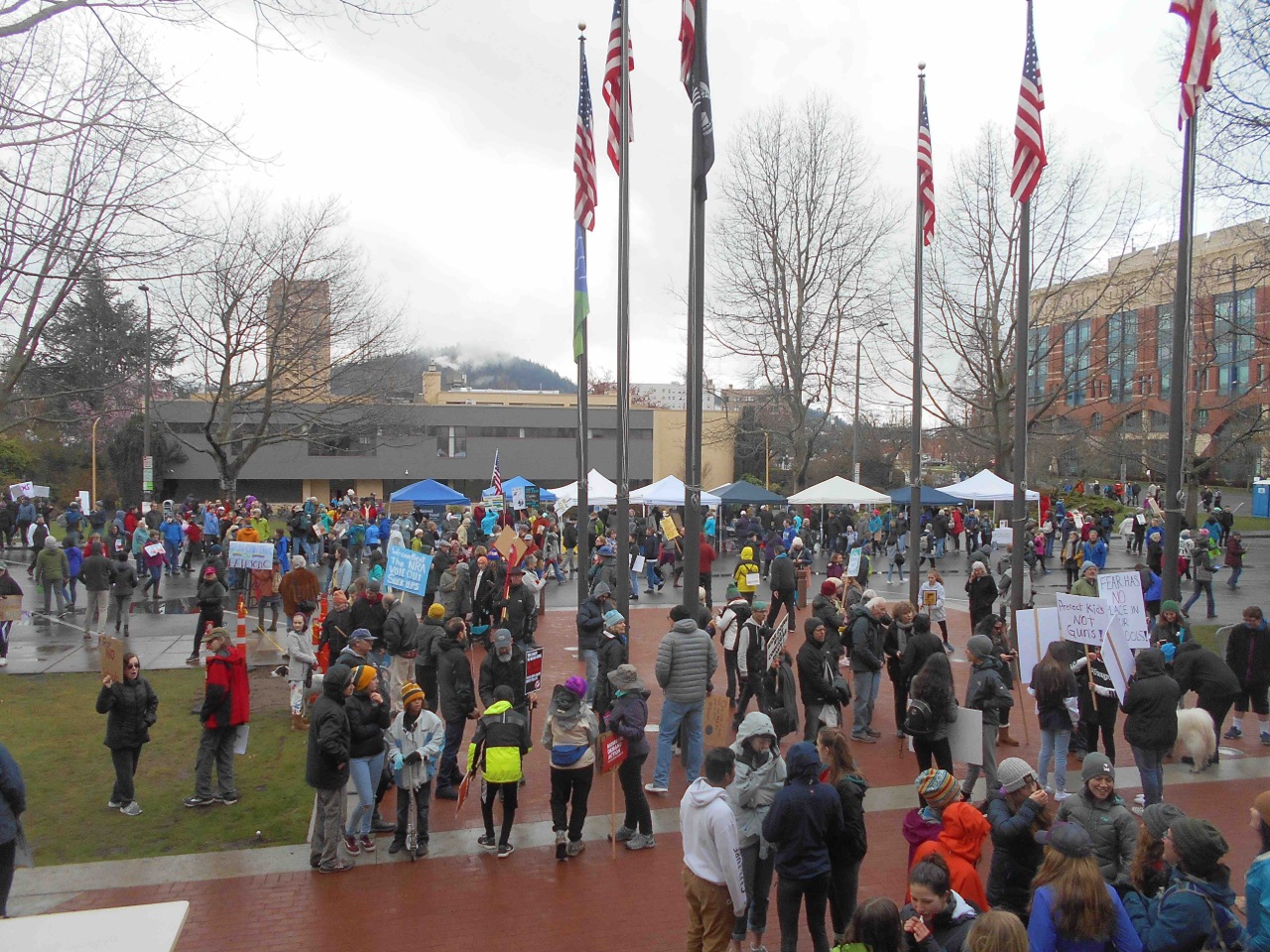 After the march ended back at City Hall, I kept snapping photos of the organizing group, the crowd, the groups that had set up canopy covered tables to register persons to vote or dispense relevant community and political information. Then my camera alerted me that it was “out of memory.” It was out of memory, but I was not. The images I gathered that day, with or without a camera, have been filed deep inside me and will motivate me to continue marching and advocating for a long time to come.
__________________________

Preston Schiller has taught courses in transportion and transit planning and sustainable transportation at WWU’s Huxley College of the Environment, Queen’s University School of Urban and Regional Planning and, currently, the University of Washington’s Civil and Environmental Engineering School’s Master’s in Sustainable Transportation.