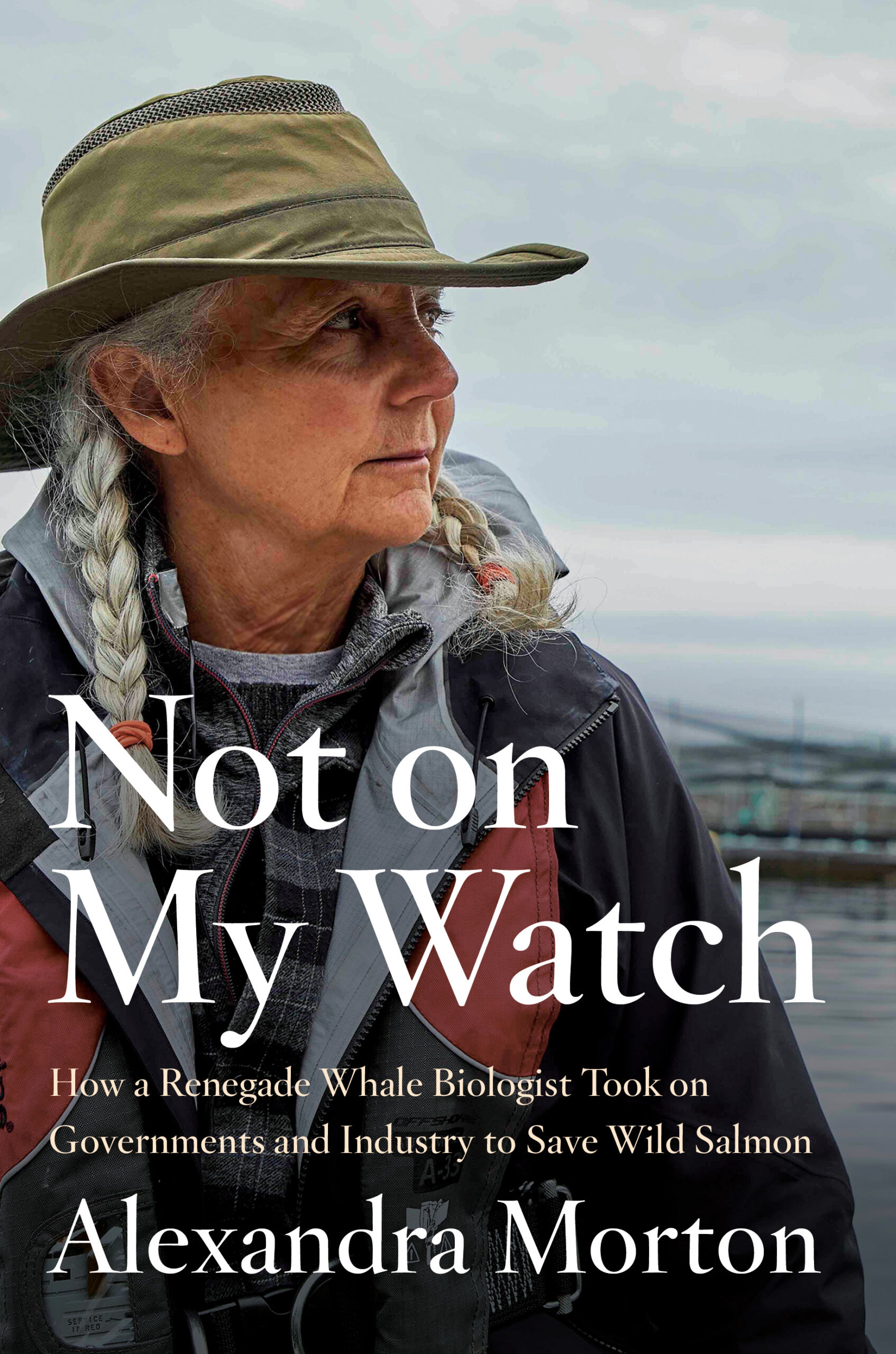 Northern Vancouver Island — mid-1980s: On a kayak trip in the orca-rich Broughton Archipelago/Johnstone Strait, we spot floating buildings and walkways down a side channel.

It was my second job as an assistant kayak guide on my first trip to the area and I had no idea what it was. Further exploration wasn’t an option, as it was off our leader’s course, and we paddled on by.

A few years before that, Alexandra (Alex) Morton arrived in this remote archipelago “to study whales,” after working with captive orca at Marineland, and, like me, “I didn’t understand the land, the animals or the people.” Nor did she suspect her whale study would lead her to 30 years of studying the causes of catastrophic reductions of salmon populations, activism, and the heart of the relationship between the multinational fish farming industry and the B.C. government. Her devotion to science, childhood inspiration to follow in Jane Goodall’s footsteps, and growing love and appreciation for the beings of North Vancouver Island’s inland passage foreshadowed the outcome. One outcome would be over 20 scientific publications and seven books about her passionate life on the B.C. coast.

Of her two books I’ve read, stories of a groundbreaking life in a magnificent place and the truths of 30 years of love and science blend together in captivating tales. Since I subsequently spent 25 years outfitting and leading kayak tours in orca territory, I’ve suspected myself of lacking analytical distance. However, compared to other biographies and whale books, her account stands out vividly.

Alex takes readers with her to live in a remote community accessible only by private boat, through the processes and findings of her life’s research, which took her from studying charismatic megafauna to becoming an expert on sea lice and piscine viruses. This in turn supported the recovery of B.C. salmon populations that are cornerstones in the foundation of all life on the coast.

Morton’s Activism
Her activism takes her diverse places: Norway, home country of the fish farm corporations; the big houses, or gathering places, of native people; occupation of fish farm docks; aboard the R/V Martin Sheen with Sea Shepherd activists; walking nearly the length of Vancouver Island to raise awareness of the effects of fish farms on wild salmon; paddling the lower Fraser River with 100 people to demand the salmon farms’ disease records from a commission formed in response to the collapse of the sockeye salmon collapse; on-screen in movies like “The Unofficial Trial of Alexandra Morton;” and “Salmon Confidential,” repeatedly in British Columbia courtrooms where she never lost a case. The breadth and depth of her work to protect wild salmon overcome my syntax.

Thirty years or so after my first trip to the Broughtons, I returned on a private kayak trip. Our water filter malfunctioned and I suggested we paddle up to the floating buildings and walkways of what I then knew was a fish farm. Just then, a D.F.O. (Dept. of Fisheries and Oceans) boat zoomed past us to the farm. A fellow met us on the dock and kindly gave us water. As we left, the D.F.O. agent and farm operator zipped out into the tide rip to fish together. For wild salmon.

I still didn’t know what lay beneath the water in the net pens. After reading Alex Morton’s book, I know more — a multiplicity of drugs to treat illness inherent in overcrowding, conditions ideal for viral mutation and escalating drug resistance, herring that swim through the nets and grow too big to leave: “bycatch.” Infestations of sea lice, one of which can kill a salmon fingerling swimming out to sea. Holes in nets where Atlantic salmon escape and feed on wild herring and larval and young wild salmon. Sick salmon protected from predators that city folk can’t distinguish from healthy fish, not to mention tons of fish excreta that drop to the sea floor unseen. Most importantly, fish that the corporations will not allow to be tested by independent scientists.

No spoilers about the ending here, but I will tell you I highly recommend this book, First Nations peoples are key, and Alex’s work goes on. And, her closing words are: “The power of one is all we have, but we all have it.”

Kathleen Grimbly graduated from WWU in Education, with substantial coursework at Huxley college. She attempted multiple real jobs, but abandoned all that after the first summer spent in an office. She founded Blue Moon Explorations, the first woman rafting/sea kayak outfitter in Washington state (as far as she knows). She’s instructed sea kayaking, hiking, and cross country skiing at Skagit Valley College, and has a home yoga therapy office.