A Wintry Day Across the Border 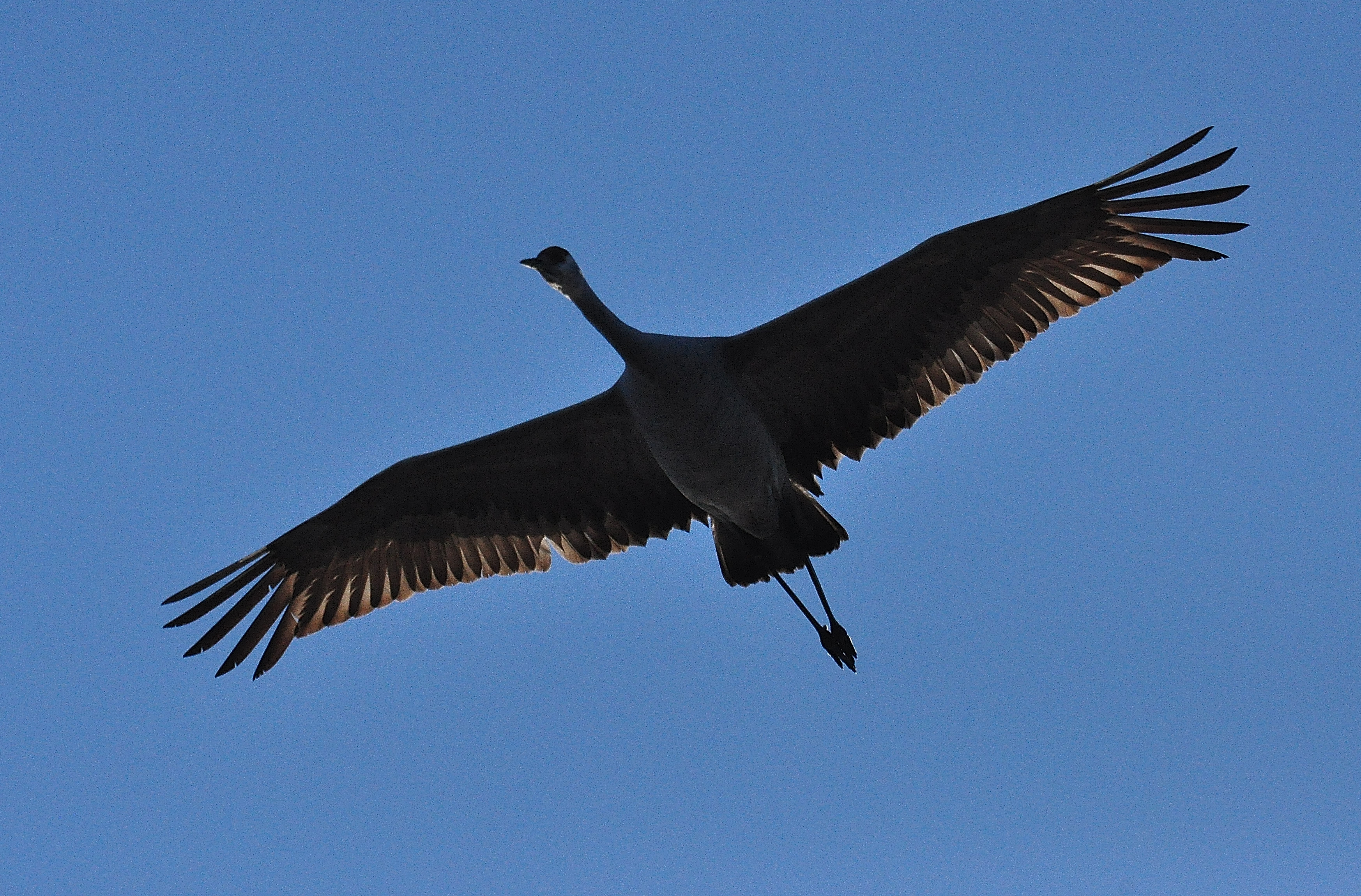 Every year, I give myself a special birthday present. While it might not seem that special to many people, it is to me. I treat myself to a day at one of my favorite places. It’s not a luxurious spa or a fine restaurant, nor does it have anything to offer in the way of warm and cozy this time of year. It’s a day outdoors at an all-time favorite place to spend any day with a variety of wintering birds. It’s my annual birthday visit to the George C. Reifel Migratory Bird Sanctuary (Reifel) on Westham Island in the lower mainland of British Columbia. I’ve written about Reifel before so this should come as no surprise to anyone who reads this column.

My birthday is on the first day of November so I try to focus on the first available date that also offers decent weather. When November rolls around decent weather comes at a premium in the Pacific Northwest. Combine that with my vow to make the trip only on Tuesdays or Thursdays (Wednesdays are taken) and the opportunities narrow considerably. My experience has taught me that midweek is best to lessen the impact of traffic at the border and crowds at the refuge.

If you’re new to the area and enjoy birds but have never been to Reifel, you owe it to yourself to make the trip. The restructuring of the refuge over the past few years has made it even better than it was when I first visited almost forty years ago. The beauty of the refuge is that it’s bird- and birder-friendly — a perfect combination. You simply park at the gatehouse, leave your vehicle behind and spend the day on foot. The trails are well maintained and wheelchair-accessible so everyone can partake. Winter is one of the best times of year to visit since a number of hard-to-find species seem to favor the refuge in the colder months.

It’s an easy 50-mile drive from Bellingham so it doesn’t take long to get there and traffic is not an issue if you leave early. On this trip I drove right to the border checkpoint, answered all the questions correctly, and was on my way. Morning commuter traffic heading into Vancouver was typically moderate and didn’t delay progress at all. Before long I had passed through Ladner and crossed the South Arm of the Fraser River onto Westham Island.

As it turned out this year, the first window of opportunity opened for me on December 15, days after the first onslaught of northeast winds and measureable snowfall. In the week leading up to the middle of the month, I saw that the forecast called for cold and clear with northeast winds. Despite the cold, more than anything I wanted good light. I also knew that the woodstove in the warming hut at the refuge entrance would be going when I arrived … and it was. As it turned out, there was no wind at all and the light was perfect all day. It was very cold but I was dressed for it.

The layout at the refuge is extremely user-friendly with trails that traverse a variety of habitats. In the past my inclination has been to start out on the trail that follows the perimeter of the open west marsh. With no wind and full sunshine, this proved to be an excellent choice. Even with a morning temperature of -6 degrees Celsius, the psychology of sunshine had a warming effect. The first thing I noticed was that ice was the main feature of the landscape. Everything was frozen solid but there were good birds right outside the gate. The usual armada of mallards was on hand, awaiting handouts of birdseed that are par for the course.

Notable among the mallards and other ducks were three of the fourteen sandhill cranes that are wintering at the refuge. The pond outside the warming hut was partially ice-free and it was absolutely covered with ducks. Just across the trail and in full view were six of the resident black-crowned night herons. These unique herons are usually well hidden when the trees are in full foliage, but winter offers a better opportunity to observe them. There’s often enough to see as soon as you enter the gate, but I had a lot more refuge to cover. 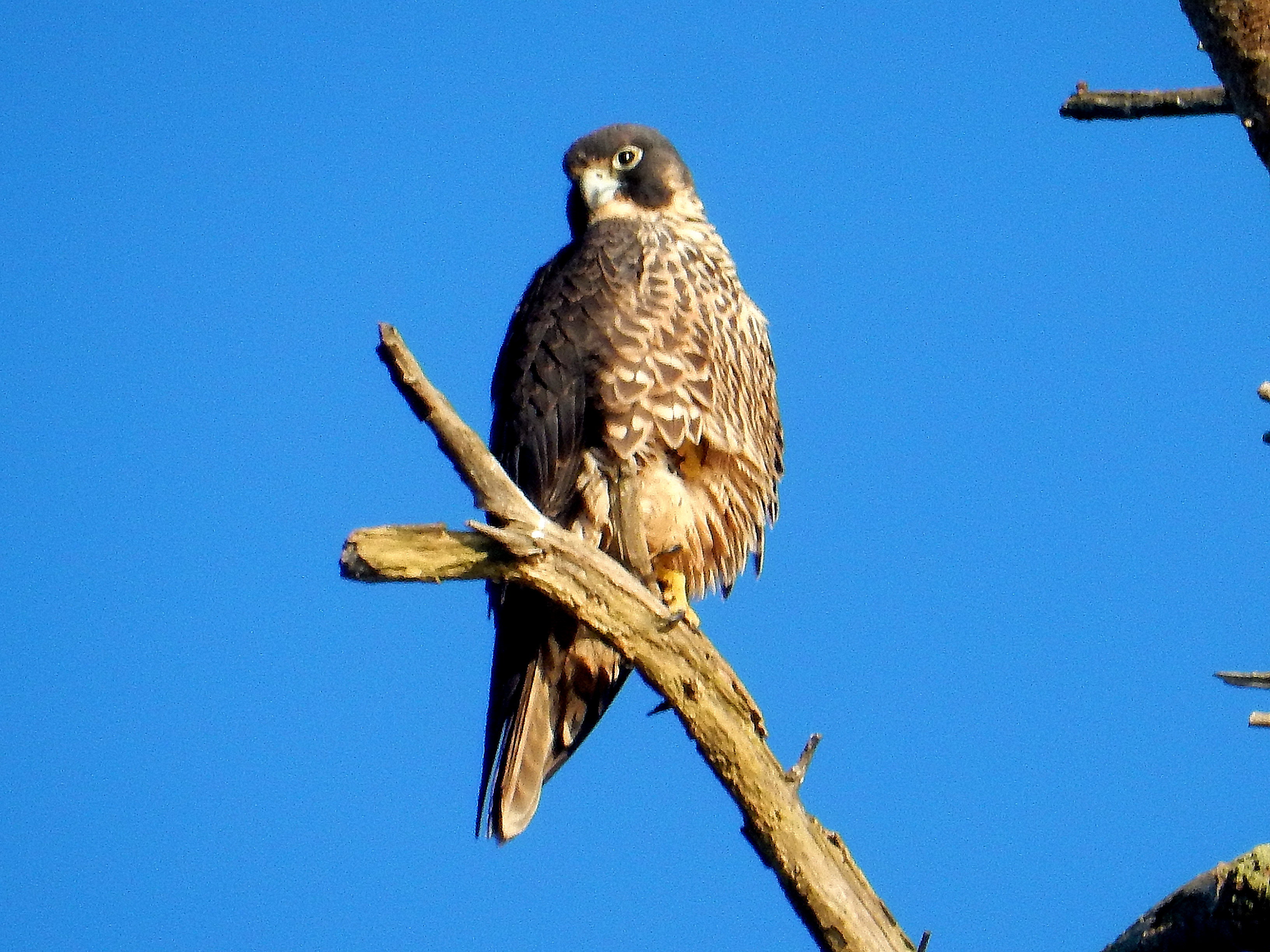 On the way to the west dike, I located the long-eared owl that I heard was lurking in the dense underbrush on the last turn of the connecting trail. This is a very special owl that is not always easy to find. Between the gate and the owl were numerous smaller birds and waterfowl, including wood ducks, American wigeons, ring-necked ducks, and northern pintails. After I spent time with the owl, I continued on the dike trail with spectacular scenery in every direction and more birds, including bald eagles, northern harriers, and the first of two peregrine falcons. Along the trail I could hear trumpeter swans and snow geese across the salt marsh.

The west trail segued into the north trail as I continued to greet the day. At the intersection of numerous inner-refuge trails I climbed to the top of the observation tower. This lofty perch offers sweeping views of the refuge and surrounding farm lands and tidal flats. From the top I could see the swans and geese I had been hearing. Continuing on the north trail, I stopped to spend time with numerous wood ducks and mallards which are quite habituated to humans with the potential for handouts.

The next intersection was with the east dike with two blinds to visit and take a break with your thermos. This trail completes the loop and returns to the main gate with numerous side trails to explore. The east dike has a canopy of evergreens and is usually the place to get to know a number of passerine species — this day was no exception. Black-capped and chestnut-backed chickadees, golden- and white-crowned sparrows outnumbered the spotted towhees, red-breasted nuthatches, and song sparrows. Fox sparrows were also lurking in the underbrush.

Feeders are the big attraction for the smaller birds along this trail. With bird seed available for purchase at the main gate, many folks enjoy the chickadees that readily come to an open hand filled with bird seed. This, by the way, is an excellent way to introduce youngsters to an appreciation of birds, and it has a similar effect on many adults. On both sides of this trail wood ducks were plentiful as they waited their turn for the bird seed that eventually found its way to the ground.

The trees along this trail offer some of the best opportunities to see some of the owls and woodpeckers that often spend the winter at the refuge. This day was not a disappointment since I was able to observe a northern saw-whet owl, typically sleeping the day away. The larger great horned owls tend to spend their days on higher perches while the saw-whets perch lower, usually in dense cover. This saw-whet was asleep in full view, right at eye level … a photographer’s dream.

I remained faithful to my usual routine and returned to the warmth of my truck to partake of a quick lunch. It was probably one of the quickest because I couldn’t wait to get back on the trails for more. Despite the cold, it was a wonderful day in every way. I stayed until the refuge closed, just as the sun was setting. An added bonus was that I was third in line at the border and I crossed in less than five minutes. I won’t wait until my next birthday to return to Reifel. If you enjoy birds at all and especially if you wish to get kids excited about them, take a day trip to the George C. Reifel Migratory Bird Sanctuary. The birds will be there.
_________________________________________________