A Win for Press Freedom 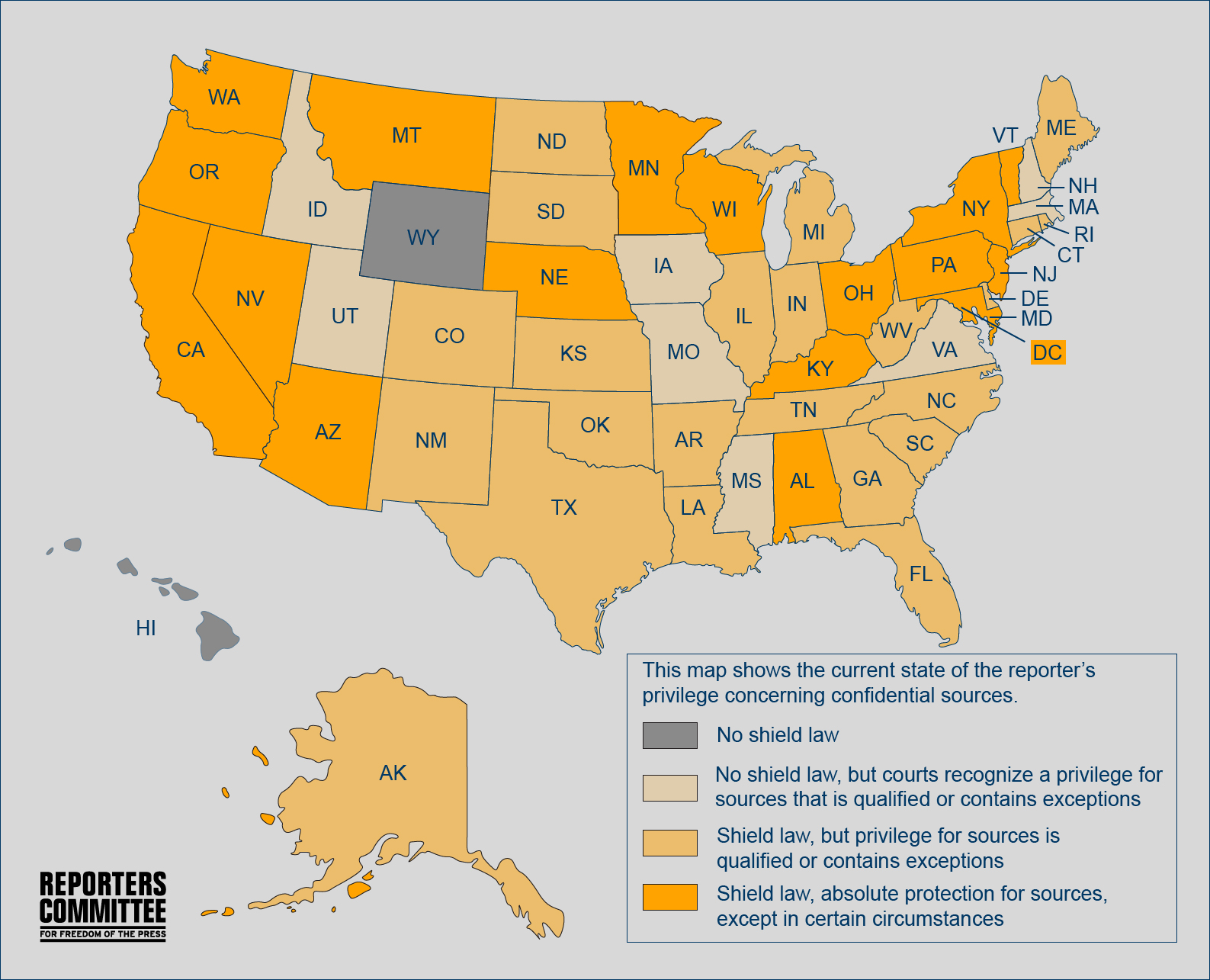 Washington has one of the strongest reporter shield laws, as depicted in this map from the RCFP. RCW 5.68.010, which went into effect in 2007, “provides the news media with absolute protection for confidential sources and qualified protection for other journalistic materials and information.” Source: https://www.rcfp.org/reporters-privilege/.

In the August 2020 (vol. 29, issue 8) edition of Whatcom Watch, we reported that the press was under threat as the Seattle Police Department was trying to force The Seattle Times and four TV stations to hand over video footage to assist the police in investigating crimes that occurred in downtown Seattle on Memorial Day weekend amid the George Floyd demonstrations. (See “Seattle Judge Rules Against the Press: Seattle Times and TV Stations Must Hand Over Footage to Police” — https://whatcomwatch.org/index.php/article/seattle-judge-rules-against-the-press/.)

Today, we are happy to report that the SPD has dropped its demand.

“Our work is not evidence that can be collected at-will by law enforcement agencies as an investigative shortcut,” said Ashley Hiruko, president of the Western Washington Chapter of the Society of Professional Journalists. Hiruko, a KUOW radio journalist, is a 2016 Western Washington University graduate.

Judge Agreed With Seattle Police
Back in July, press advocates were nervous because King County Superior Court Judge Nelson Lee had supported the police department’s request for the footage. The purpose of the subpoena, the police were contending, was that journalists reporting in downtown Seattle on May 30 during the demonstrations most likely captured on film suspects who torched five police vehicles and stole guns from the police cruisers.

Attorney Eric Stahl, representing The Seattle Times and the TV stations KIRO, KING-5, KOMO and KCPQ Fox News, fought back. Stahl said the police did not meet all of the criteria of Washington’s shield law, known as RCW 5.68.010.

That statute, in effect since 2007, provides an absolute privilege for confidential sources, but a qualified privilege for other newsgathering material, regardless of whether it was published or unpublished, so there was some wiggle room for the judge to side with the police.

In his defense of the media, Stahl went on to tell Judge Lee that if the media were forced to hand over footage to help the investigation, that move could be perceived as assisting law enforcement and stir up even more public distrust with journalists.

Judge Lee didn’t buy Stahl’s argument and sided with the police during the July 23 hearing. So Stahl and his team went on to file an appeal, and then, on September 21, lawyers for the SPD filed a motion with the state Supreme Court essentially dropping the subpoena because the judicial process would delay their investigation well into 2021. Additionally, federal prosecutors had made an arrest of a 24-year-old Everett man in connection with the stolen police rifle.

No Federal Shield Law
Although the subpoena has been dropped, preserving press freedom is an ongoing battle. On Twitter, Seattle Times Executive Editor Michele Matassa Flores called the announcement that the police were pulling back “a victory.” She further tweeted “…next we’ll be pressing to strengthen the state’s journalist shied (sic) law.”

Currently, there is no federal shield law in the United States. Rather, states have enacted a reporter’s privilege that protects his/her confidential notes and sources to varying degrees (see Reporters Committee for Freedom of the Press, RCFP, map depicting state shield laws).

If you want to get into the nitty gritty of Washington state shield law, read “Reporter’s Privilege Compendium,” by Bruce Johnson and Eric Stahl, updated June 14, 2019: https://www.rcfp.org/privilege-compendium/washington/

Jennifer Karchmer is a freelance and independent journalist covering press freedom, the First Amendment and reporter safety. She was an instructor at WWU from 2006-2014 and has served as editor of Whatcom Watch. More at: www.jenniferkarchmer.com.