Is Washington Now in the Tar Sands Crosshairs? 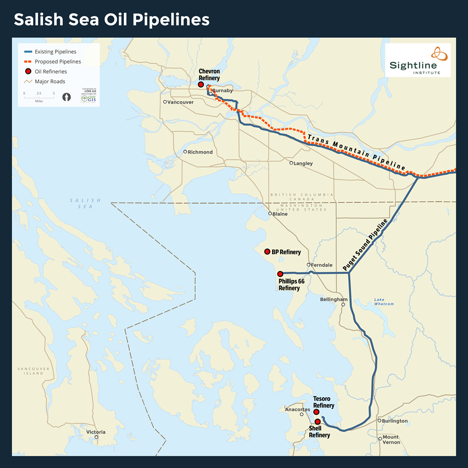 Editor’s Note: Shortly before the July issue was scheduled to be sent to the printer, I learned the following article from Sightline.org was reprinted in the Cascadia Weekly. That paper only printed a portion of the article — Whatcom Watch is running the entire article.

It seems likely that the Canadian province of Alberta — home to a massive tar sands industry that produces some of the globe’s dirtiest and most polluting oil (1) — has put the Pacific Northwest in its crosshairs.

The province is partnering with the Canadian government to ram through the expansion of the Trans Mountain pipeline, a 715-mile conduit that would carry up to 890,000 barrels of oil per day from the Canadian interior to southwest British Columbia. Much of that oil would be exported by tanker from a port just outside Vancouver ­ — resulting in a seven-fold increase (2) in oil tanker trips from the Port of Vancouver into the Salish Sea. Additional tar sands oil would make its way south to Puget Sound refineries, via a 69-mile pipeline called the Puget Sound Pipeline (PSP).

So, with the full-throated support of the Albertan government, Canadian prime minister Justin Trudeau agreed last week to buy the existing Trans Mountain pipeline, along with the nascent expansion project, from Houston-based Kinder Morgan, Inc., which was threatening to walk away from the project entirely. Canada bailout (3) sent Kinder Morgan’s share prices soaring, while earning Trudeau a deluge of criticism from across the political spectrum. Unsurprisingly, Alberta played a key role in financing the deal. (4) pledging up to Can$2 billion to keep the pipeline expansion moving forward.

But hidden in the details was a surprising fact: the Canadian government intends to buy not only Trans Mountain, but also the Puget Sound Pipeline. Canada’s purchase of the PSP went completely unmentioned by Kinder Morgan and the Canadian government until late last Friday, when a regulatory filing (5) blandly admitted that Kinder Morgan had bundled its Puget Sound assets into the Trans Mountain deal:

On May 29, 2018, Kinder Morgan Canada Limited … entered into a Share and Unit Purchase Agreement … with Her Majesty in Right of Canada … [which] will transfer to the Purchaser the ownership of … the Trans Mountain pipeline system (“TMPL”) and related expansion project (“TMEP”), the Puget Sound pipeline system and the Canadian employees that operate the business and assets to be sold.

Strikingly, this means that the government of Canada is poised to become the sole owner of an oil pipeline feeding Washington State refineries. Even more troubling, Kinder Morgan has been telling investors for years that it is considering doubling the capacity (6) of the Puget Sound Pipeline.

This raises a deeply disturbing possibility: the government of Canada — with active financial, public relations, and logistical support from the government of Alberta — may be planning to double shipments of some of the globe’s dirtiest fossil fuels to refineries into Washington’s backyard.

Here are just a few reasons why this development is so dangerous for the global climate:

Its tar sands make Alberta one of the most polluting areas of the industrialized world. 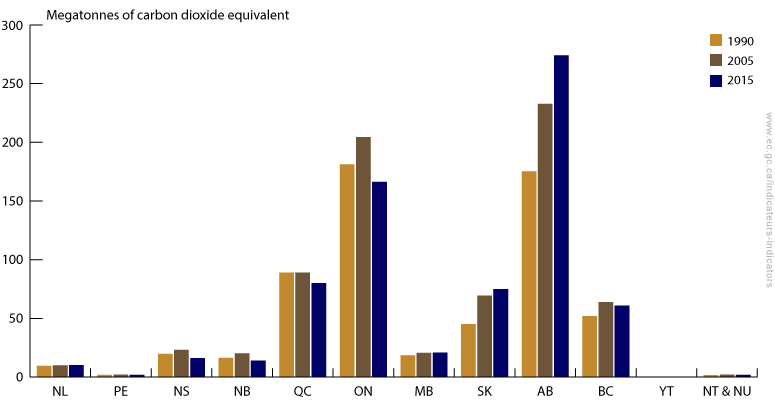 According to the Canadian government, Alberta already emits far more climate pollution than any other Canadian province. Worse, those emissions have skyrocketed since 1990, largely due to rapid growth in the province’s massive, heavily subsidized, (7) and environmentally catastrophic (8) tar sands industry.

Yet the picture is even worse when measured per person. Alberta has fewer than 4.2 million residents — just over one-tenth the population of California’s — yet has a climate footprint that is nearly two-thirds the size of the Golden State’s. (9) All told, residents of the prairie province emit a whopping 67 metric tons of CO2 per person per year —making Albertans “among the developed world’s largest emitters” (10) according to researchers from Ontario’s Western University.

However you measure it, Alberta’s tar sands industry makes the province a world-class polluter today. But things are only looking worse over the coming decades.

Alberta wants to substantially boost production of the dirtiest oil on the planet.

Let’s leave aside the tar sands’ massive problems with sulfur, heavy metals, spills, (11) and the outright decimation of the Athabascan landscape. (12) The raw product of tar sands mining is essentially sludge, and it takes a lot of additional energy to process it into something useful. Because of the extra energy demand, tar sands oil is some of the most carbon-intensive oil on the planet:

• In 2010, the Natural Resources Defense Council looked closely at tar sands emissions, concluding that consuming tar sands oil spewed 14 to 25 percent (13) more CO2 into the air than an “average” basket of US crude oil. 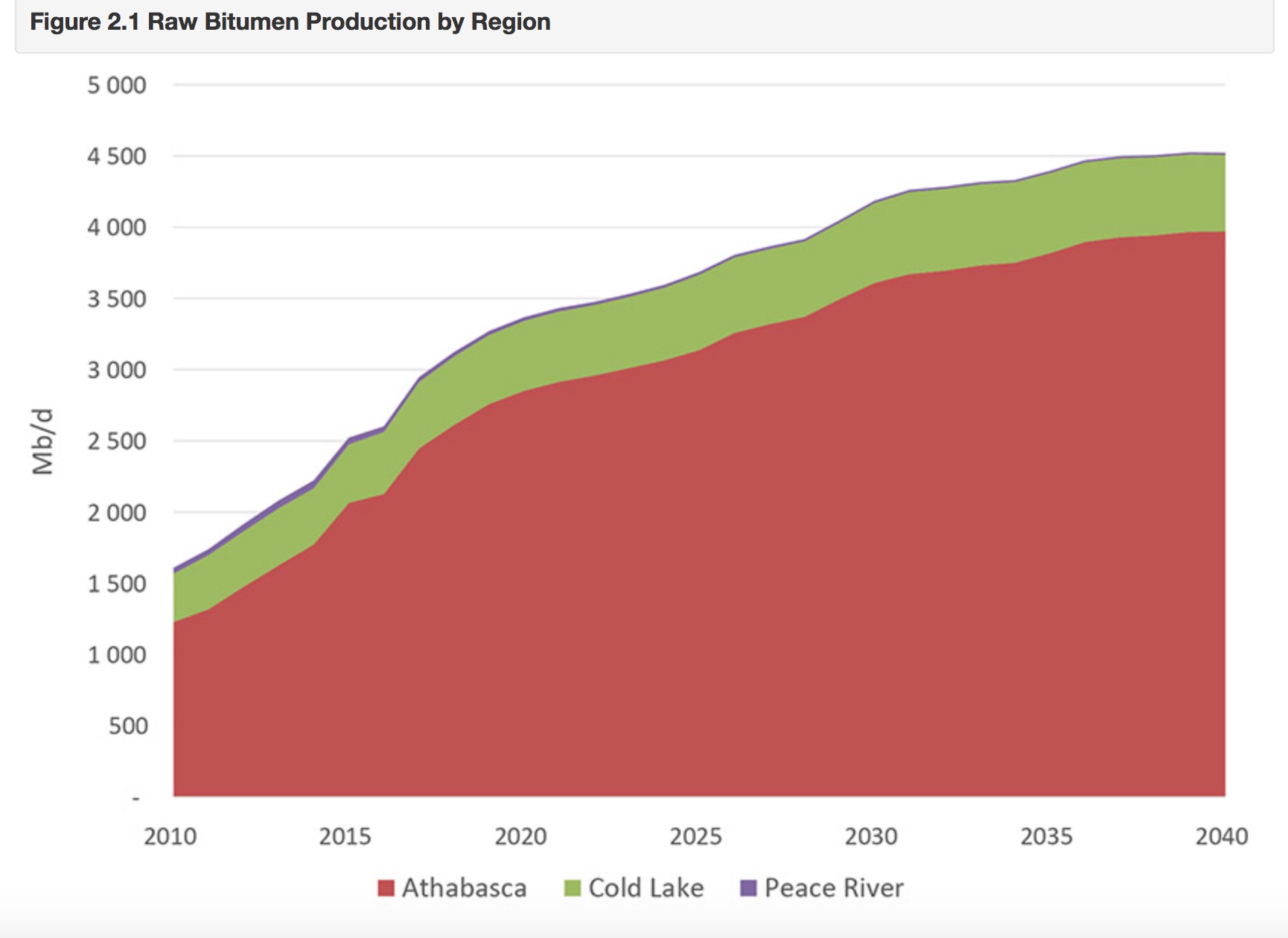 The U.S .State Department, in its 2014 review of the Keystone XL pipeline (18) project, found that tar sands oils:

• “emit an estimated 17 percent more GHGs on a lifecycle basis than the average barrel of crude oil refined in the United States in 2005.”

• Yet the Keystone XL emissions estimate has likely been superseded by a more recent estimate from researchers from the Argonne National Laboratory in Illinois, which found last year that tar sands oils produce 21 percent more CO2 (19) than a typical basket of US crude.

• The Carnegie Endowment for International Peace pegged several tar sands (21) products as among the globe’s most carbon-intensive oils.

‘Hard Cap’ on Tar Sands Emissions
In exchange for Ottawa’s support for the Trans Mountain pipeline expansion, Alberta agreed to put a so-called “hard cap” on emissions from its tar sands industry. Under that cap, the Albertan government says that it won’t allow its tar sands industry to emit more than 100 million tons of climate-warming emissions per year. Mind you, 100 million tons is roughly the entire carbon footprint of Greece. (22)

Additionally, a closer look reveals that this “hard cap” is more like a sieve. The cap has so many loopholes and exceptions that it’s virtually meaningless.

For starters, the so-called “hard cap” still allows the tar sands industry to boost climate-warming emissions by 30 million tons per year from today’s level. That increase amounts to about one-third of total emissions from the state of Washington. It’s also about as much as Costa Rica and Nicaragua (23) combined.

As if that weren’t bad enough, the cap has at least 6 exceptions (24) that the Canadian government itself thinks will boost emissions by an additional 15 million tons by 2030. (25) (See p. 138 of this report from the Canadian government.) In other words, the so-called “hard cap” of 100 million tons per year is more like a flexible cap of roughly 115 million tons per year. But in a thorough dissection of the leaky cap, (26) energy analyst Barry Saxifrage found that several of the loopholes are unlimited, and could lead to additional emissions far in excess of the extra 15 million tons that Canada now estimates.

Yet in a way, arguing over the holes in the “cap” is beside the point. The “cap” covers emissions from only a subset of tar sands extraction and processing, while ignoring the much higher carbon content of the fuels that would be burned. All told, extraction, processing, and burning 4 million barrels of tar sands oil will release roughly 700 million tons of climate pollution per year, which puts Alberta’s tar sands industry on par with some of the globe’s most polluting nations.

And while the oil industry often claims — deceptively — that restricting tar sands production will have no impact on global oil consumption, basic economics says that this is wishful thinking at best, and willful deception at worst. A new report by the Stockholm Environment Institute (27) describes the economics clearly: when factoring in the effects of new tar sands output on the global supply and demand balance, “for each barrel of Canadian oil produced, global oil consumption would increase between 0.2 and 0.6 barrels (28) compared to if Canada did not produce the oil.” Worse, those emissions could be “locked in” for decades, even if tar sands projects prove to be financial duds. Tar sands operations are more like factories than oil wells, where most of the costs result from up-front capital expenditures. This means that even if oil prices drop and oil companies are forced to write off their tar sands investments, the factories will still be able to keep running producing oil for decades after the original investments flopped.

Alberta’s Tar Sands: A Loaded Gun
Without a doubt, Canada’s bailout of the Trans Mountain expansion project will go down as one of the most insidious dirty energy subsidies of the decade — which is saying something, given the crazy decade we’ve all just experienced. (29) But Canada’s tar sands addiction has now turned from a global fight to a local one. Canada (and Alberta) clearly have their sights set on exporting oil through the Pacific Northwest — both on the waters of the Salish Sea and on a pipeline in Washington that the government of Canada plans to buy, and that it could double in size. (30) Justin Trudeau has brought a global fight to Cascadia’s doorstep, and it’s now up to Washington residents to decide how to respond. This article originally appeared on the Sightline Institute website sightline.org and is reprinted with permission.

Clark Williams-Derry is director of energy finance for Sightline.com. He has spent 15 years directing the research team, and now focuses on U.S. and global and energy markets, particularly issues affecting the Western United States. Previously, he served as senior analyst with the Environmental Working Group.