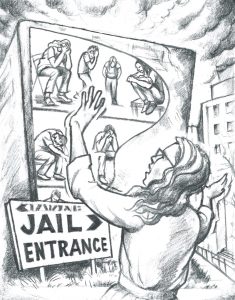 When my young friend ended up in Whatcom County Jail as a result of unmanageable complications with his mental illness, I became alerted to a tragedy in our society. It brought up thoughts and feelings of worry, fear and curiosity about the difficulty he was experiencing in the facility where he resided. I was motivated by a desire to help him. Instead, I found many obstacles as I tried different supportive approaches. I inquired of volunteers from the Red Cedar Dharma Hall to meditate and bring much-needed spiritual energy into the jail. That fizzled out because no one wanted to go to the jail. The jail system was restricted and limited. As a highly sensitive person, I was discouraged from entering the jail facility. What could I do?

As a friend of his distressed mother who suddenly found herself in an unworkable system, I responded to her personal need for support by providing healthy contact for her son, nurturance from one who cared, despite the wise warning. With mercy as my motivation and compassion as my guide, I went to the jail during visiting hours. I sat outside a separating glass, and spoke with this mentally ill young adult into a short black phone. I listened to him express his frustration and hopelessness within the harsh walls that enclosed him, in words he could hardly speak, with eyes that could not focus, under the wild hair of a shattered man. His breath was trapped in the constraints of his fear. Gratitude, the antidote to fear, was the most obvious missing factor in our encounter. I was dismayed at how much hurt was imposed by a system that one might think would help, a wise consultant aptly reflected.

My well-intentioned visit made little sense to the caged person I was trying to reach. I did my best to perceive the truth behind the circumstances of my friend’s incarceration, but it seemed my presence was a meager voice for wellness. The system housing my friend seemed overwhelmingly hollow, with failed places I later learned about. When his single mother called 911, she was seeking protection against the abuse of a family member. Instead, her son was arrested on a domestic violence charge. I had witnessed her efforts to resolve things with the help and support of her community. The young adult was not thinking straight.

Tricky Mental Health Issues
Mental health issues can be very tricky … often the afflicted don’t want help and can’t take advice, and go headlong over the precipice, my astute colleague wrote. Mental health problems lead to episodes of poor judgment. Pushing his mother resulted in a checkmate that spiralled into a nightmare for years to come. It was not her intention to have him charged criminally, but once law enforcement arrived there was no backing out.

According to Amy Nelson’s article, “Alternatives to Jail Save Money” (Whatcom Watch, May 2018), “Courts across the country are implementing alternatives … to provide better conditions for the substantial number of people suffering from mental illness …,” and Whatcom County has done this so to some degree. Unfortunately, my friend was rejected from Whatcom County Mental Health Court with no explanation. In ferreting out the details of this misfortune, there were reasons personal to him, as his condition was difficult to diagnose — but also, it seems the ratio of those who reach the privilege of working with this court is much lower than the number of those who need it. Let us hope the underutilization of this well-meaning alternative will be massaged into a more effective one through the presence and tutelage of our new Whatcom County Prosecuting Attorney, soon to be elected.

In addition, my friend was not eligible for Bellingham’s Reduction Incaceration Challenge (BRIC) bracelet program under contract with the city through Friendship Diversion Services, due to his homelessness. To make matters worse, not only was he in the wrong facility, which exacerbated his mental health crisis and bankrupted him, but he was demeaned by the prosecutor’s judgmental remarks. I became aware of a shocking bias in our civil servants, which inspired me to face the tragedy of the jail, to rise up and be the solution I am looking for in the justice system: to respond, communicate and be accountable.

Through this personal tragedy of my friend, I found a calling to explore what else I could do. After that, I sought out the compassionate work of the Restorative Community Coalition (RCC) to find help for what I could not do alone, and information about the system that was further traumatizing my friend. I found this group helps folks navigate the court system, and formerly incarcerated people and their families to recover from the impact. The RCC is encouraged by the upcoming 32-bed triage center to house mentally ill detainees, but it could have had no impact on this situation.

Harm to At-Risk Populations
I learned more about the inhumane treatment of my friend; things I did not want to know, but were happening. Although he was legally “innocent until proven guilty,” he was being punished and shamed like a criminal, and his mental health was getting worse. Society is failing the mentally ill. I discovered how it is harming at-risk populations and creating poverty. To realize that people are treated as guilty before they are prosecuted, when they are still innocent under the law, revealed to me the great extent to which the jailing system in this county is broken, cruel and morally incomprehensible. I see that the great problem society has with mental illness has infected the system itself. The sane ones are those who protest its flaws and work for change.

The incarceration system as it now stands cannot help people deal with their suffering. Due to this obsolete approach to criminal justice, we, as a community, are in crisis regarding Whatcom County Jail and its inhabitants, their mental health and illness, drug and alcohol addiction and homelessness. Attending the Restorative Community Coalition meetings gave me hope. My friend’s mother prayed, counseled, followed up and sent books and money to her son, and I found myself in a community of people transforming the old paradigm of punishment and banishment.

The Restorative Community Coalition has been advocating for a restorative justice systemic approach because it gets better results and is a better use of taxpayers’ dollars. Their message is clear: “We need proven conflict resolution, intervention, mentorship and harm reduction strategies.” We need prevention such as substance abuse facilities, boarding houses for the homeless, and mental health facilities to help deal with emotional upheavals
.
Adverse Childhood Experiences
Adverse childhood experiences (ACEs) are present in our society at an alarming rate. The effects of ACEs on self-esteem and personality disorders underlie crimes, and need to be factored into a new individualized approach to restorative justice. Policy changes need to be applied to ensure the safety of jail employees. We do not need a prejudicial holding camp to further punish victims of a chaotic, confused society that makes the situation worse. Whatcom County can be a national leader when these ideas are implemented, and it will benefit everyone.

The county executive, county prosecutor and county sheriff have been promoting building a brand new bigger jail — when it was not justified. Instead, what we need is better management of the two that we already have. They created a plan to build a 500-plus-bed facility on purchased property on Labounty Road. It would have been far from the downtown area courts, and close to Ferndale. The problems with this big-jail plan, which voters rejected twice, is that their plan is expandable to upwards of 2,400 beds, with limited taxpayer control. The multiple problems and issues with exorbitant costs (that would have burdened county taxpayers) were ferreted out and exposed by the Restorative Community Coalition. The overcrowding, and money available to fix the current facility, were not properly managed; and this has been validated by the subsequent research from the Vera Institute of Justice report.

People now see the side effects and horror of “prisons for profit.” They wonder why the officials are not looking to more humane models for more frugal innovations. The Restorative Community Coalition has researched the situation, and has put together their recommendations for a restorative system in which authentic justice would become a realistic goal. Their summer’s work produced a blueprint to save taxpayers’ money, reduce the hidden costs of the current system, and to, instead, build recovery programs that yield a higher return for the whole community. The RCC is taking action toward their vision for an economically sound and humane system of justice that includes harm reduction, drug and alcohol recovery facilities, mental health facilities, and a functional jail that works to hold only those who must be held for public safety.

Listening Tour
I recently spoke at the County Council’s listening tour on jail issues. The council team has traveled to all the cities in Whatcom County to gather public input on the current jail crisis. I heard great speakers, attorneys and laypeople, who are deeply concerned for this at-risk population, and the wellbeing of our society. It was unanimously put forth that we, the people, want a more humane system. The video recordings of these speakers are available to the public on the County Council’s YouTube channel. I observed through participating in the listening tour an encouraging fact, that the ideas generated in this forum are consistent with the values of the Restorative Community Coalition.

The volunteers at Restorative Community Coalition need help. Their upcoming spaghetti feed fundraiser promises to be a great success on November 10, 2018, in Ferndale. They need help for families, and help to transform our current incarceration system into a humane one with a sustainable budget. They want dignity for the marginalized, who are often dealing with mental illness, and living in poverty. Typically, many are often fleeing from abuse, not the law! They need help coping with real issues … not more trauma.

Other cities have accomplished this. Larry Krasner, Philadelphia, has implemented good policies. See https://theintercept.com/2018/03/20/larry-krasner-philadelphia-da/. It is a good example of what could blossom in our beautiful county. We have shared this information with our administrators, our police and our leaders to consider the ideas and values. On Wednesday, September 19, 2018, the Restorative Community Coalition hosted a debate between the Whatcom County Prosecuting Attorney candidates, James Erb and Eric Ritchey, on these issues. The debate focused on many concerns highlighted in this article, and opened up the discussion of the prosecuting attorney’s job for the citizens to investigate further. Please see the website: RestorativeCommUnity.com for more detailed information. I hope this vision for a healthy psycho/socio/economic change will take place soon. I am happy to report that through family and community effort, with tremendous love directed his way, my friend has made it out of the system alive, and is doing well.
__________________________________

Elizabeth Cardarelli acts freely and artfully in her pursuit of self-actualization. She authors stories that transform education, spiritual practice, personal experience and self-care. She is a freelance writer living in Bellingham. Address inquiries to awakeningthebalance@gmail.com.