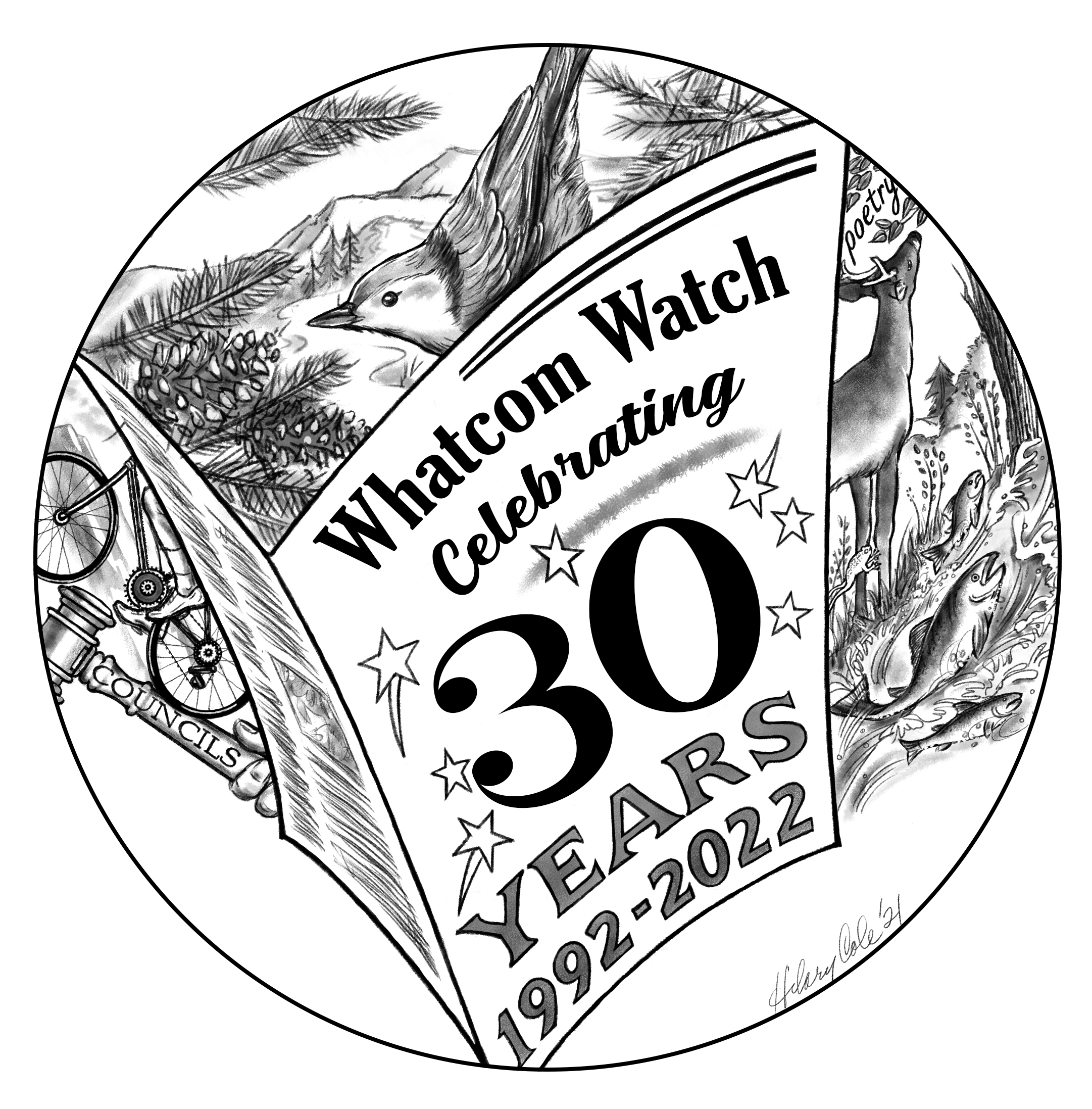 Whatcom Watch, a grassroots environmental newspaper in Bellingham, celebrates its 30th year of publication. It is the result of many hours of dedicated volunteer labor each month. The papers are distributed to over 50 locations countywide, and the estimated readership is 6,000.

First Issue
The year 1992 was a relatively quiet one for news and politics in Whatcom County. However, citizens’ frustrations with politicians were growing due to the lack of response from the local government on issues that affected their community. The previous 10 years had seen rapid development in Bellingham and the surrounding county, with only muted lip service to environmental protections and quality of life issues.

So, in 1992, feeling that Whatcom County decision makers were ignoring their concerns, a few local residents started talking. They agreed there was a need to communicate between groups trying to democratize public policy on these and other issues; there was a need to inform the public of what was happening.

Three women, Lorena Havens, Rebecca Meloy, and Sherilyn Wells, started talking over the phone and decided to publish a newsletter that would serve as a clearinghouse and forum for people concerned about the many issues that were arising in the city and county. They soon met to work out the details.

As a result, the first Whatcom Watch, Issue 1, (a six-page back-to-back photocopied paper) appeared in May of 1992. It began with these words:

This is a critical time for Whatcom County. The WHATCOM WATCH is dedicated to preserving the quality of life in Whatcom County by maintaining a true balance between that quality of life, growth, farmland, forests, and fish and wildlife. We will do this by serving as an information network between citizens, neighborhood groups, agencies, and our elected officials. We plan to record “issue votes” in our councils.

The first issue brought attention to some of the problems the editors felt were being ignored or taken lightly by The Bellingham Herald and public officials. These stories included: progress on the Critical Areas Ordinance required by the state Growth Management Act; development of forested lands southeast of Fairhaven; airport expansion and the destruction of wetlands; Lake Whatcom water quality; and Sudden Valley sewer expansion, among others.

One thing has remained constant — since the first issue, the Watch has been largely produced by a group of volunteers. The articles, layout, editing and distribution were and still are provided by individuals on their own time and often at their own expense for the good of the community.

Whatcom Watch Goes Online
In the subsequent years, Whatcom Watch has evolved to its present state. The first notable change came in February 1993 — between May 1992 and January 1993, the paper was photocopied on 8 1/2 by 11-inch paper. Since February 1993, it has been printed on tabloid newsprint. Another notable change came with the January 1998 issue, when John Servais provided space on his NWCitizen site for the articles of each issue. In 1999, the Watch got its own domain name and website. Since it began, the Whatcom Watch online website has had a steadily growing readership.

Whatcom Watch online not only provides everyone with internet access the ability to read the Watch, it also allows past issues (beginning with the January 1998 issue) to be easily retrieved by readers with online access.

Longtime Staff Members
For 30 years, Bill McCallum, layout manager, has worked on Whatcom Watch. Bill attended his first Watch meeting in August 1992, but did not have a specific job until 1994. He began creating layout with the August-September 1994 issue. After that issue, Bill alternated creating layout with Laura Steiger until March 1996. Bill has created every Whatcom Watch layout since then, except for September and October-November 2003.

In addition to creating the layout each month, Bill paid attention to local governmental votes. Between 1992 and 1996, he was aware The Bellingham Herald included charts accompanying articles about city, county and port meetings. Each chart covered two or three votes about less significant issues. Bill saw the need for local governmental voting reports and began, with volunteers, reporting Bellingham City Council and Whatcom County Council votes in 1999 and the Port of Bellingham Commissioner votes in 2000.

Our local governmental vote coverage was uneven during the first three years, but has been comprehensive over the past 20 years. To date, we’ve covered a total of 1,589 meetings and reported on 14,829 votes. Thanks to Bill for his vision about transparent local government.

In 2000, Bill McCallum, who was also on the North Cascades Audubon Board with Sally Hewitt, opined to Sally about the lack of a writer for the Sudden Valley sewer issue. Sally had recently returned from the Tetons, where she’d written a column for the now-defunct Teton Independent — she acquiesced to writing an article for the paper. After reading Sally’s article, the editor at that time, Helen Brandt, decided Sally should become the next editor of Whatcom Watch.

Sally’s first editing job began with the June 2000 issue, and she alternated with Helen until she took over as managing editor in June 2001. In addition to editing, Sally also sold ads and enlisted local musician, Marcia Guderian, to also sell ads for Whatcom Watch. Sally remained editor until July 2009, at which time she retired to spend time painting and writing a novel.

Several editors stepped in over the ensuing years, until August 2018, when it appeared Whatcom Watch was editor-free. Hewitt had been volunteering as a proofreader for a few months and was informed there would be no August issue of the paper. She jumped into action, called on writers she’d worked with in the past, and they were able to produce an August issue, after all. So, she became editor of Whatcom Watch again with the August 2018 issue and soon called on Marcia Guderian once again to sell ads.

Marcia Guderian is a valued longtime staff member of Whatcom Watch, as is former editor, Helen Brandt, who uploads our paper to our website each month. And, thank you to Barry and Boris for compiling council votes over the years. And to Hilary Cole for contributing outstanding illustrations.

Interns and Other Writers
In December 2019, two WWU interns wrote articles for Whatcom Watch. Since then, quite a few articles by interns have filled our pages. We’ve been fortunate over the years to have had the support of many excellent local writers, who continue to write for us. Thanks to all of you — without you, we would not exist.

The Future
Whatcom Watch will continue to be a forum for local writers and organizations wanting to improve our community and environment. It’s our intent to serve as a grassroots information forum dedicated to preserving Whatcom County’s quality of life. The three women who began a community paper 30 years ago for people concerned about Whatcom County made a difference. You can make a difference, too!