What Is Happening to the Sea Stars? 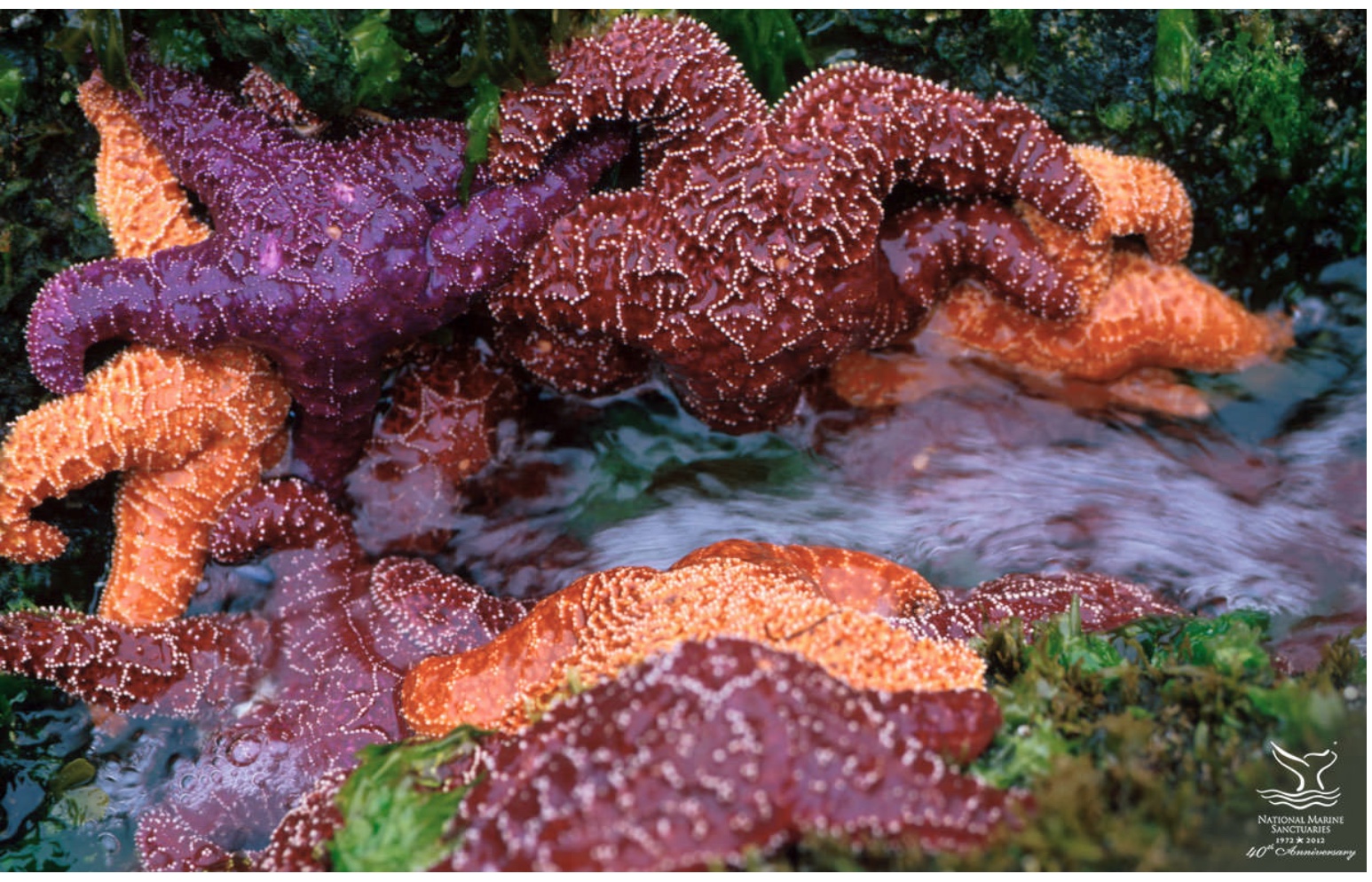 As a child in the 1980s, I loved clam digging and oyster picking with Dad and Grandpa. Because Grandpa had a hard time walking the tide flats, we launched a small boat from Blaine Harbor and rowed over to the water’s edge at low tide. As we passed the dock, I hollered, “Stop, Dad, stop!” I needed to examine all the sea life clustered on the dock pilings. The boat gave me a close-up view of sea cucumbers, anemones, sea worms and so many, many sea stars!

In April of this year, my family visited Semiahmoo during a very low tide. As we walked under the dock pilings, my two small children squealed and jumped when the clams squirted them. Other than the clam holes in the sand, the only sea life to examine were the huge barnacles. We also examined a large sign telling us (in five different languages) NOT to eat the shellfish here.

My heart breaks as I reminisce to my children about the great diversity of sea life we used to have here. And my daughter asks a logical but unanswerable question: “What happened?”

If I said “pollution” or “disease” or “ocean acidification,” I might be right. But, perhaps it’s a combination of all that, plus more. It’s like trying to explain why a honey bee colony collapses. There are so many unanswered questions about why my children’s earth is deteriorating. It’s worse than sad. It’s frightening.

Keystones at Risk
A keystone species is one that predicts and determines the health of an ecosystem. The sea star is the keystone species of our local tide pools. Since 2013, our sea stars have been nearly wiped out by something called the sea star wasting syndrome, or SSWS. It has affected our shores from Alaska to Mexico. As the sea stars withered and died, their fellow tide pool creatures disappeared.

The University of California, Santa Cruz (UCSC ) sponsors a website called “MARINe” where multiple agencies have collected and posted their research and data about SSWS. https://www.eeb.ucsc.edu/pacificrockyintertidal/index.html

I emailed their researchers to request the most recent data. Basically, I asked: “What was the root cause? And, is the sea star population returning yet?”

The answers are unsatisfying. In science, you propose a theoretical root cause, and then try to prove or disprove it with tests and data. But, in the case of SSWS, Ian Hewson, a researcher at University of California, Santa Cruz, tells me, “we do not have any new evidence or conclusive proof of any causative agent — and, in fact, we believe that there were multiple diseases and multiple etiologies causing these diseases at play from 2013-2017.”

In one study, they proposed the denso/parvovirus as a possible cause of sea star wasting disease. But, only the sunflower star seemed impacted by the tests. They were unable to elicit the disease in Pisaster Ochraceus (ochre stars) “by viral, bacterial, or physico-chemical (i.e. temperature) manipulation.”

One theory pointed to drought as a possible factor. The beginning of sea star disaster in 2013 was preceded by drier-than-average conditions. But sea stars are disappearing in areas where drought has not occurred.

Wasting Syndrome Symptoms
Symptoms of the disease include lesions, legs turning to a white jelly, legs falling off, and, finally death. See pictures at the UCSC website mentioned earlier. Ongoing research looks at a group of possible contributing factors to the demise of sea stars. Ian Hewson says that they are advocating renaming the disease to “Asteroid Idiopathic Wasting Syndrome” since there were likely multiple diseases and the cause is unknown, or “idiopathic.”

UCSC invites everyone to post their sea star sightings to the website. My kids and I have added our findings a few times. On our April visit to Semiahmoo, we did finally see three healthy ochre stars, clustered on a piling accompanied by some anemones and a line of mussels clinging to a rope. One mini ecosystem to rejoice over!

Melissa Miner from UCSC invites us to “Explore the data” on their website. There we can produce graphs that use data from contributors like me. It shows that the Pacific Northwest has some surviving sea stars. They seem to be slowly reproducing and repopulating our tide pools. However, southern California shows no signs of recovery. Miner says, “The disease still persists at low levels throughout the entire West Coast, so the future of sea stars is still somewhat uncertain, even in areas where populations appear to be recovering.”

What We Can Do
The only glimmer of hope I can offer — a non-scientific statement — is: At least the oyster beds of Drayton Harbor have been healed as a result of community effort. http://draytonharboroysters.com/. After a multi-faceted, long-term approach to reducing pollution, shellfish along some parts of the Blaine shoreline can now safely be eaten. Find ways to get involved here: https://www.restorationfund.org/home.

Nicole Schmidt is a late-in-life mom and an early retiree from a technology career. Gardening and writing are her passions.