But there is too much big money in our politics

In 2011, when Washington state adopted voting by mail for all elections, we weren’t thinking that we would be preparing ourselves for the coronavirus crisis, but we were. All across the country these days, states are hustling just to make it possible for people to vote. Some, like Wisconsin, are not making it. When social distancing is mandatory to prevent the spread of the epidemic, bringing people together in polling places just doesn’t cut it.

Washington state can take pride in adopting this voting method, so sensible from so many points of view.

The state Legislature has in recent years adopted numerous other measures that make it easier for people to vote, among them same-day registration and pre-registration for seventeen year olds. The state’s high schools are resuming civics classes — which, unaccountably, had been dropped from the curriculum a couple of decades ago. Our state, and in particular Seattle, is showing the way in campaign finance legislation also. Washington voters approved I-735 overwhelmingly in 2016. That initiative called on Congress to start the process of amending the Constitution so that money would no longer be viewed as “speech.”

Seattle’s Democracy Vouchers
Seattle voters got the ball of campaign finance reform moving concretely with the city’s “Democracy Vouchers,” adopted by initiative in 2015, and used for the first time in 2017. Funded with the property tax, $100 worth of vouchers in $25 increments are issued to any citizen or “green card” resident who requests them. Voters can then deliver the vouchers to the candidate or candidates of their choice. To be eligible, candidates have to agree to overall spending limits and to lower limits on the amount of any individual contribution outside the Democracy Voucher program.

The property tax cost really isn’t very big. It’s about 1 percent ($3 million) of the city’s annual property tax revenue. To make sure the revenue would cover the cost of the vouchers that voters used, there has been a phase-in period for which races are actually covered. For example, the mayor’s race will be covered for the first time in 2021.The result has been a great increase in small donations to candidates, according to figures from the Seattle Ethics and Elections Commission, which administers the voucher program.

In 2015, when Seattle was moving from at-large to district-only city council elections, almost 19,000 individuals donated to the nine city council races that were being contested. Of these, a little over 8,000 were donations of under $100. 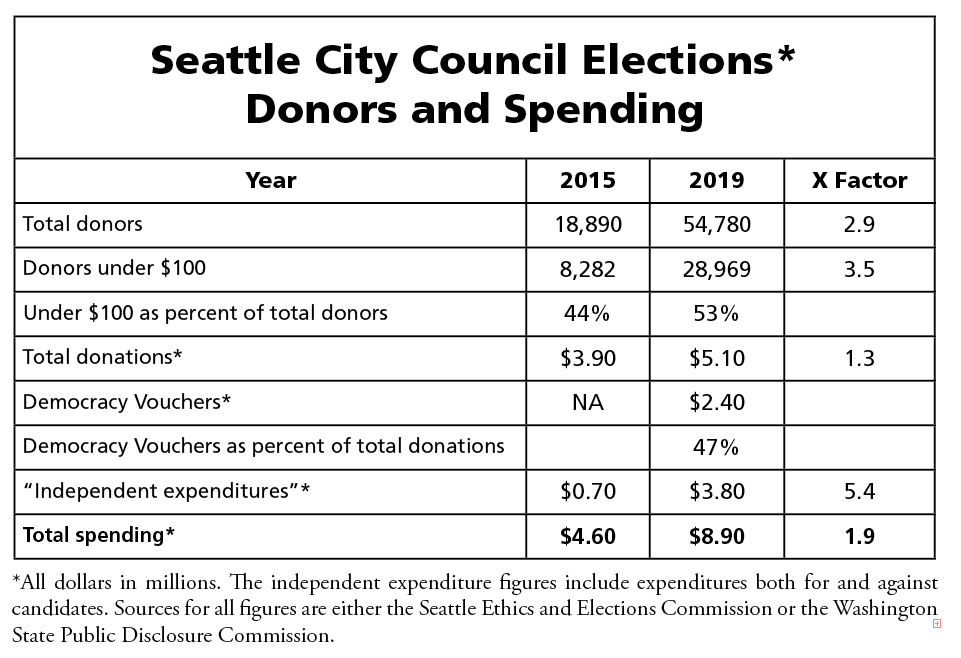 This corporate attempt to win the election with money failed.

And, in March, there was more good news. The corporate honchos had enlisted one of their favorite arms, the Pacific Legal Foundation, to claim in the federal courts that the Democracy Voucher program was a violation of free speech rights. When the U.S. Supreme Court declined to hear the case, the case in effect died, and the Democracy Voucher program now continues with a clean bill of legal health.

Independent Expenditures
Having led on candidate donations with Democracy Vouchers, Seattle is now taking aim at the main current source of corrupt campaign financing — independent expenditures. Councilwoman Lorena Gonzalez has proposed a three-pronged Clean Campaigns Act. The first two prongs, relating to foreign influence and transparency, have already been passed. The council is still deliberating on the last one, which would effectively put Super PACs out of business — a real blockbuster in a political scene, where the money gets outlandishly bigger in every election cycle.

You thought that free speech protected money in politics? That’s what the notorious Citizens United case held, isn’t it? It is, so long as the money in question is money donated to campaigns. The Supreme Court never addressed money donated to Super PACs. That was something a lower court did a few months later — and that decision was never appealed. The thought is that there is an opening for the people after all.

Bellingham and Whatcom County
The City Council in Bellingham is doing its part for democracy, too. Earlier this year, they unanimously passed a resolution urging the state Legislature to pass the so-called Local Options Bill (HB 1722), which would allow local jurisdictions to adopt ranked-choice voting. I’ve written about ranked-choice voting numerous times in Whatcom Watch and elsewhere. Perhaps it’s time for a similar resolution from the County Council. 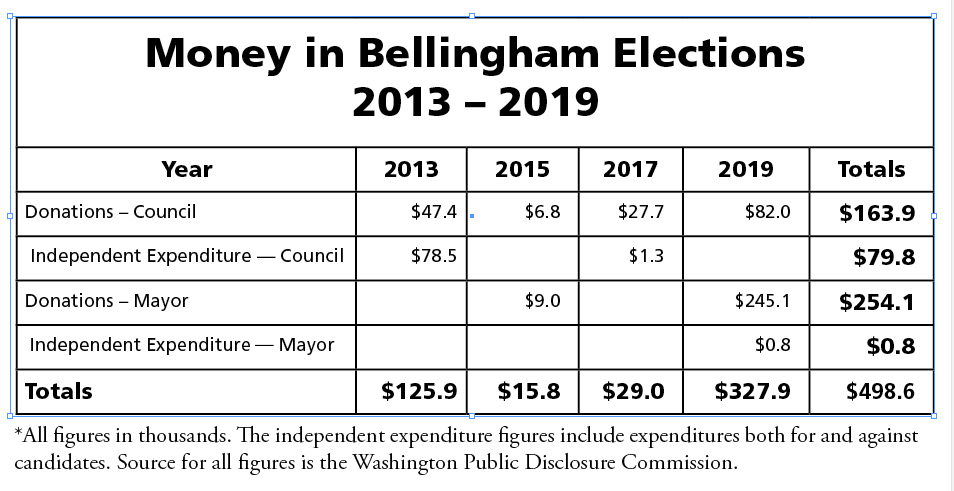 What we haven’t done at either the city or the county level is address the problem of money in politics — and we have one. On a per person basis, the spending on Bellingham races in 2019 was 40 percent higher than the spending in Seattle, even with the corporate trolls tramping all over the place. It’s important to note that the Bellingham figures include contributions in the mayoral race, whereas that was not a factor in the Seattle figures. This last year we had hard-fought contests among four good candidates for mayor and eight candidates for the city council. They were battling one another for money as well as votes, when what we needed them to focus on was our votes.

Whatcom County elections have attracted even more cash— over $2 million since the 2013 election. Notably, about 30 percent of the overall amount has been in the form of independent expenditures.

Stoney Bird is a member of FairVote Washington, a nonpartisan nonprofit that supports the adoption of ranked-choice voting around the state. When the Whatcom Charter Review Commission was meeting in 2015, Stoney advocated for ranked-choice voting in electing the Whatcom County Council. The proposal came within one vote of getting on the ballot for the voters to vote on.