Voting and Vote Counting with Integrity 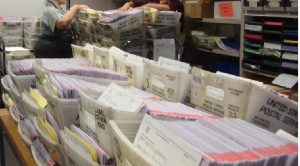 Trays of ballot envelopes, as they are assembled into random “batches” at the start of the process, as they arrive in the Whatcom County Auditors’ Office.

Trustworthy Elections require a voting system with solid integrity, protected from tampering or corruption of the tallies of votes cast. This review does not deal with who can cast a ballot (registration, etc.) — which are valid concerns. This analysis starts at the point where a paper ballot is received in the elections system (drop-boxes and postal delivery to the auditor’s office.). Whatcom County has a vote counting system that meets a strong procedural, high-integrity standard of checks and balances.

We have official “Observers” usually representing the political parties and other distinct interest groups like the League of Women Voters (LWV), but any person may take a brief training by the Elections staff, sign an oath of how to do the task, and thus be permitted to “Observe.” These observers are allowed to be in the rooms where any of the ballot and vote management activities are taking place. They may not touch any materials, and may speak only to a Supervisor to ask questions, or for designated activities.

The general sequential process is as follows: The ballots are mailed to the voters. A person votes his or her paper ballot by marking an inked line in the read area for their intended votes, puts it into the secrecy envelope and puts the secrecy envelope (containing the ballot) into a slightly larger outer envelope. On the back flap of the outer envelope, the voter signs his or her name. The voter then either mails in the ballot or deposits it in a drop-box at one of the locations established and advertised by the auditor’s office.

The envelopes containing the ballots are gathered regularly by two staffers from the auditor’s office, from the distributed official drop-boxes and the U.S. Post Office. In the office, they are placed into random batches of about 100 ballots, each batch put into a large plastic tray. Each tray has a unique “ID” number and is thus identified on a log sheet created for each batch. The trays and ballots are stored in a safe.

The auditor’s office has a copy of each voter’s signature in their database system. Before the ballots are removed from their return envelopes, they are processed by persons trained to compare the signature on the (still sealed) outer envelope against the signature on record. For the purposes of this discussion of integrity, we know that the signature has been visually verified; therefore the ballot is declared to be from a registered voter, and this is registered in the database. Hence, only one ballot from that voter will be processed.

In order to have the ballots processed, they need to be removed from the outer and the secrecy envelopes, and they are separated. At this point, the ballot cannot be identified as to the voter who cast it.

Then, every ballot is visually inspected and reviewed by staffers, to pre-determine that voter intent will be read correctly by the scanners. Any marks except a proper vote usually requires that the ballot be manually duplicated by staff (always two people — one marking; the other checking). Log sheets are kept and signed by both, and the voter-marked ballots are moved to a different storage place — and both of the log sheets are numbered for cross-referencing so that at any later time, the voter-marked ballots may be retrieved for verification.

Ballot Duplication
Washington State law requires that effort must be made to count the vote according to the “voter intent.” There are 24 different “voter intent” scenarios that are recognized as guides for the staff. So, there is an initial visual inspection of every ballot. Where irregular marks are seen, the ballot is duplicated following that guide. In instances where a voter’s intent cannot be determined, a duplicate ballot is made, leaving out that item. The same will happen if the computer-scanner spots an irregularity — the ballot is removed and a duplicate made and re-inserted in the process.

Batches of Ballots
Other safeguards include: ballots (and their digital twins) are handled and stored in “batches,” arbitrary bunches of usually about 100 ballots placed and managed together. Several batches may be placed in a storage box. Each batch and box is identified by a unique number, and all the activities for managing the ballots are registered in a logging-system. If some ballots get withdrawn from a batch for some kind of verification, they get re-registered in a new batch, and the record of the batch they were taken from gets edited to show the lower count. All these movements are checked by staff and a supervisor, and signed by them both. The boxed batches are kept in a secured room except when being processed.

Security of the Computers
Ah! The processing!

The computer system is located in a locked and secure room. There are industrial, quality, high-speed scanners, which make and save a digital copy of the votes that were marked on the paper ballot by the voter. They are directly connected to the processing computers and take only seconds to read a batch.

At predetermined and announced times, so that observers may be present, the ballots in batches are ‘read’ into the computer system by a high-speed scanner, one batch at a time. The batch numbers are registered on the log sheets of each scanner.

One big safeguard is that the scanners and computers that read the marks on the ballots, and store and count the votes have no communication-connections to the outside world. Programs are loaded onto the computers from certified copies on digital media. Data cannot be sent directly to or from these computers and any others. The computers have features that would block any attempt to send/receive thru the electric power lines.

All vote-total digital output from those computers is transferred out only by manual transport of a removable external disc drive. The data is copied onto such a disc, which is carried (by two people, for integrity) to an administrative room to be incorporated into the permanent storage systems (we call this a “sneaker-net” referring to their shoes.) For verification, those vote totals are also printed in both locations (the computer room before they go out, and again in the administrative office, so there can be a double-check.) Then the results will be made ready to go public.

But! There is another step!

Audits and Observers
The computerized results are subjected to a wonderful activity – a manual double-check or a mini-audit.

One major activity that the Observers do is randomly select batches for integrity verification. While the paper-ballot batches are being scan-read by the computer systems, the Observers in that room have been granted the role of designating some random batches to be later verified by a hand-count. Those batches are then sealed in special boxes, tagged, registered and stored in a separate place.

The double-check hand-count takes place soon afterwards (usually the next morning.) Those randomly-selected batches of paper ballots are taken to a meeting-room, and any Observers may be present. The Staff opens the paper ballot boxes and hand-count the selected races (twice, by two teams of staffers.) If those two counts agree, then the computerized counts (which were printed but not disclosed) are announced for the first time, and everybody knows whether the computer-counts numbers match the hand-counts – or are different! It is an independent, basic double-check.

If the vote-tally numbers differ between the computer-count and the hand-count, then an investigation is started (right there, in the same room). The paper ballots are intensely scrutinized for any irregularity which might have been understood one way by the computer-system, and another way by the staff. The most common reason for a difference has been that a pen mark by the voter on a paper ballot was lighter than recommended (required) which led the staff-people to see it as “a vote” but the more-sensitive computer-system to call it “a non-vote — a blank.” When the staff and managers find such a ballot, it will be removed from the batch and a substitute ballot sheet marked (duplicated) to coincide with the presumed Voter-Intent to be inserted. That “repaired” batch is run through the scanner/computer system again and new results are brought to the review team (with Public Observers still there). With almost no exceptions, over about a dozen years, the computer tally with the vote properly marked, matched the hand count first found by the verify-staff. No errors, and no corruption.

The batches of paper ballots are then archived under a management system of coded identification of each batch. 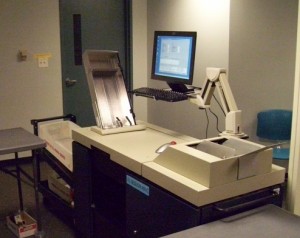 One of the three scanners, with its computer, in the secure, always-locked, processing room.

The Computers and Software
Computer software is a fundamental part of the system, and the programs might be subject to corruption. Federal and State law requires that all such systems be reviewed and certified as reliable (not having features that could be used to corrupt the reported vote-tallies.) Our system in Whatcom County did meet that certification requirement when it was purchased.

But all such machines are subject to eventual failures, so there must be a management program to replace them, with new models that also have been certified. We believe that any new equipment (hardware and software) must be carefully reviewed and found reliable (i.e., certified).

Whoops! The federal office that should have been doing that had essentially drifted into almost non-existence. But it has recently been re-activated, and new programs are now beginning to obtain Federal certification. Therefore, jurisdictions like our county and state may be examining them in the near future.

But the Washington State certification process is still idle. Therefore, one task of the public is to push to re-start the WA State certification program, and assure that those activities adequately review any new computer systems and then produce Certification Reports on them, so that they may be acquired. That must be done before our (“old”) systems start crashing! Some experts are talking about perhaps only three more years of life for the current systems (thus, 2018.)

We hold (almost without exception) that the votes must be delivered to the elections office marked on paper ballots by the voters. No electronic/digital voting. No touchscreen voting. No internet voting. Those can all be hacked and corrupted. The paper ballot is physical, thus verifiable, whereas electronic records are not. (A few exceptions are made for special cases such as military voters overseas, and voters who are blind or have other disabilities.)

We must insist on having Hand Countable Paper Ballots!
As explained, we (the auditor’s staff and the observers) use those paper ballots to actually do some hand-counts as a double-check on the machine counts. With these process steps, all of us can have confidence that our votes have been correctly counted and reported.

This is a public education article by Whatcom Fair Voting, which has been in operation for over a decade.

So, what needs to be done, and by whom? We believe that every county (and why not every state) should adopt the ballot management methods, which have been used so successfully in Whatcom County. An essential tool for this is the adequate, and certified, computers and software. Washington State has to do the certification of new election machines.

The January issue of Whatcom Watch will contain final election results and disclosure filings by candidates.