The Chuckanut Formation in Our Backyard 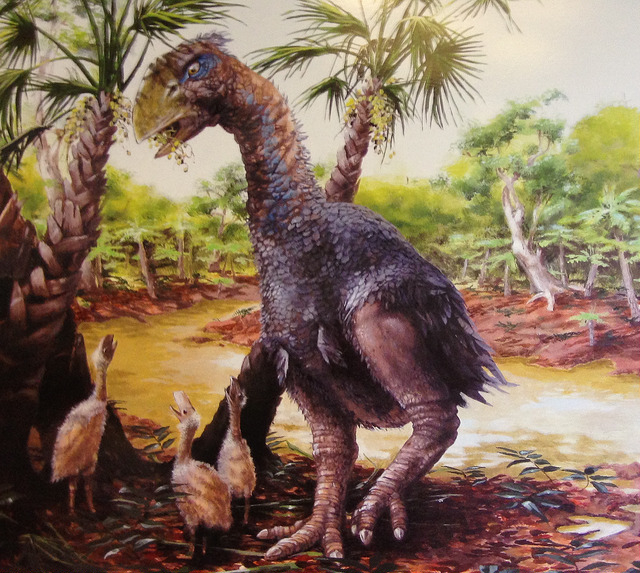 Fifty million years ago, there were giant, 7-foot-tall chickens wading around palm trees in the subtropical swamp that is now Whatcom County. And the remnants of this geology are still present. (1)

Those chickens were Diatryma, a flightless bird whose tracks were found in sandstone slabs uncovered by a mudslide above Racehorse Creek east of Deming and discovered by Western Washington University geologists in 2009. (2)

In stark contrast to the mountainous Pacific Northwest of today, during the Eocene epoch between 55 and 34 million years ago, the terrain was quite flat. However, as today, the region was lush with vegetation and interlaced with streams meandering to the Pacific Ocean from what is now Eastern Washington. As the streams approached the ocean, they slowed and their sediments (sand, clay and silt) carried from huge rock formations to the east settled out. The resultant sedimentary deposits in this flood plain included plant fossils and ancient animal footprints that are telltale signs that this was a low-lying coastal plain with a subtropical climate. (3)

Over millions of years, these sediments accumulated, were compressed by gravity and tectonic forces, and solidified into immense geologic rock formations. One of these structures, the Chuckanut Formation, sits under Bellingham and parts of Whatcom County. This formation is made up of sedimentary rock, primarily of sandstone, siltstone and shale that extends to depths of about 20,000 feet and is interspersed with pockets and seams of coal from the ancient compressed peat bogs and vegetation.

After settling out for about 15 million years, tectonic plate activity from the Pacific moved eastward until it pushed up against the North American continent, folding up and into what is today the Olympic Mountains. At the same time, these pressures appear to have folded the Chuckanut Formation into several mountains and hills. Today we know these as Chuckanut and Galbraith mountains and Sehome Hill, as well as others to the east.

The term Chuckanut, it is agreed, is a local Indian term. Its meaning, however, is less clear. Robert Thomas, a longtime resident of Chuckanut Drive and author of Chuckanut Chronicles, likes this meaning: “A small bay lying adjacent to a large bay with a steep hill or mountain rising from its shores.” The U.S. Geological Service’s interpretation is “Long beach far from a narrow entrance.” (4, 5)

Local Fossils
Given the swampy nature of this flood plain covered with vegetation and wildlife, it is little surprise that there were eons worth of fossil material impressed in the layers of mud and silt that accumulated. Plant fossils are abundant in the sandstone. Few animal remains have been found, although numerous bird, mammal and reptile footprints were left in the muddy shores. 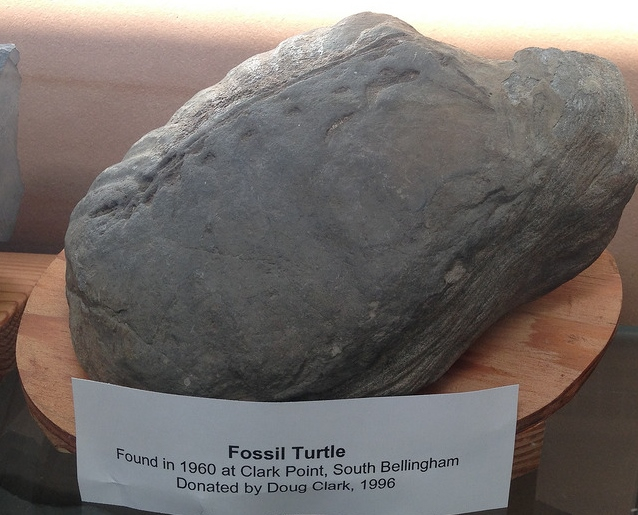 Of those identifiable footprints, a number include distant ancestors of our current species along with some that have become extinct altogether. For a time perspective, this Eocene Epoch occurred some  10 to 12 million years following the great dinosaur extinction approximately 65 million years ago. The birds, however, are distant ancestors of dinosaurs. (The tracks and prints and fossils are available for viewing in the WWU Geology Department museum.)

Among the birds that walked here 50 million years ago, many would be familiar today including ancestors of herons, various shorebirds and geese.

Plant fossils are particularly abundant throughout the formation. They left a huge footprint that is readily observable today at the mudslide above Racehorse Creek, as well as on and around Chuckanut Mountain. (6, 7) 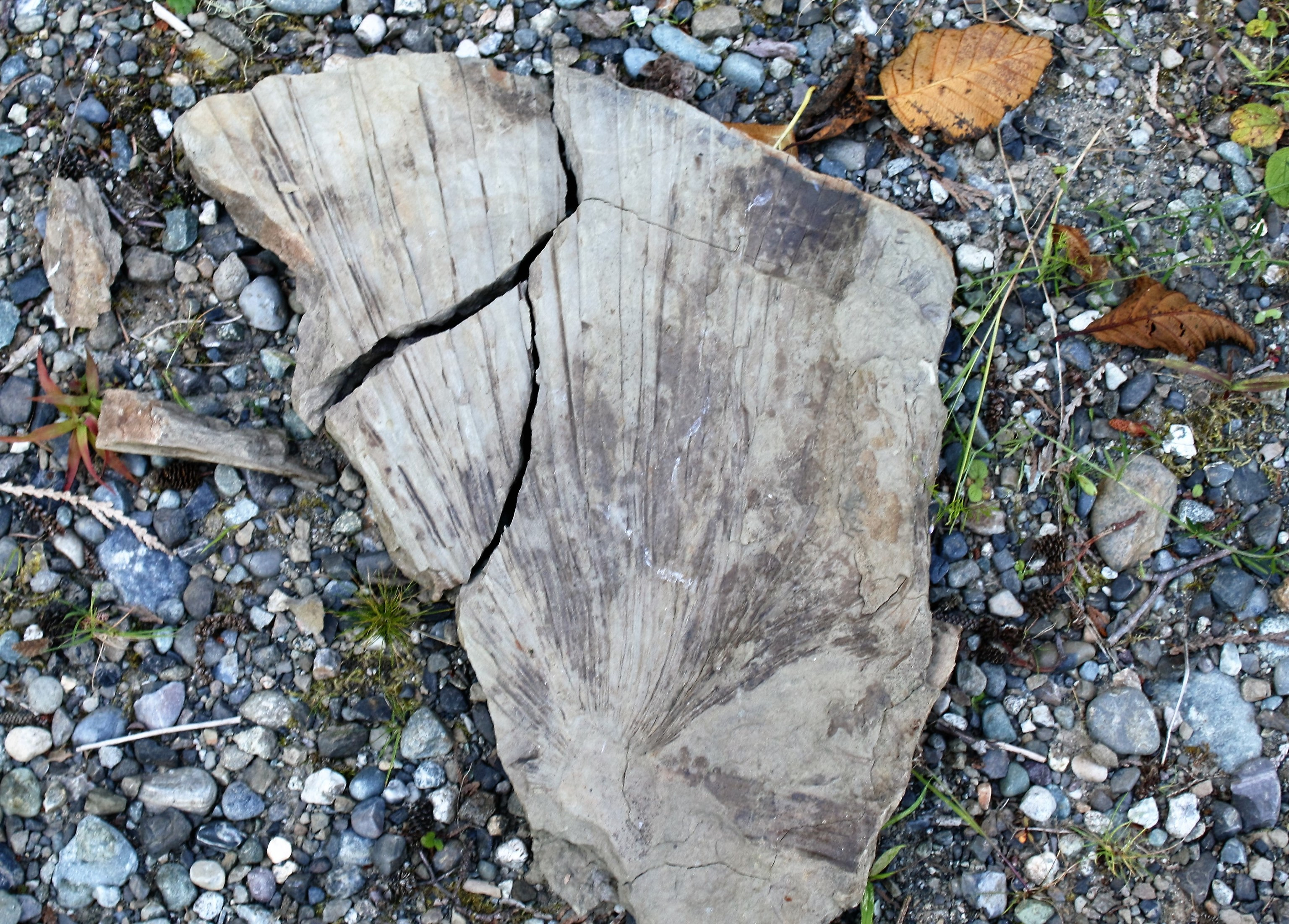 One fossil that I found particularly fascinating was the impression of an alder leaf in a piece of shale lying next to a small alder tree sprout with leaves exactly like the fossil, only 50 million years younger.

The Sandstone
In addition to the interesting fossil history of this formation, there is an aesthetic side to it as well. This formation has left us with wonderful and intricately shaped stone formations, especially along the bay shores below Chuckanut Mountain. These formations are readily observable along the shores of Larrabee State Park, Wildcat and Teddy Bear coves, Clayton Beach, Boulevard Park and Chuckanut Bay. Anyone who has driven along Chuckanut Drive will recall that the wall that is the uphill side the road is solid sandstone. 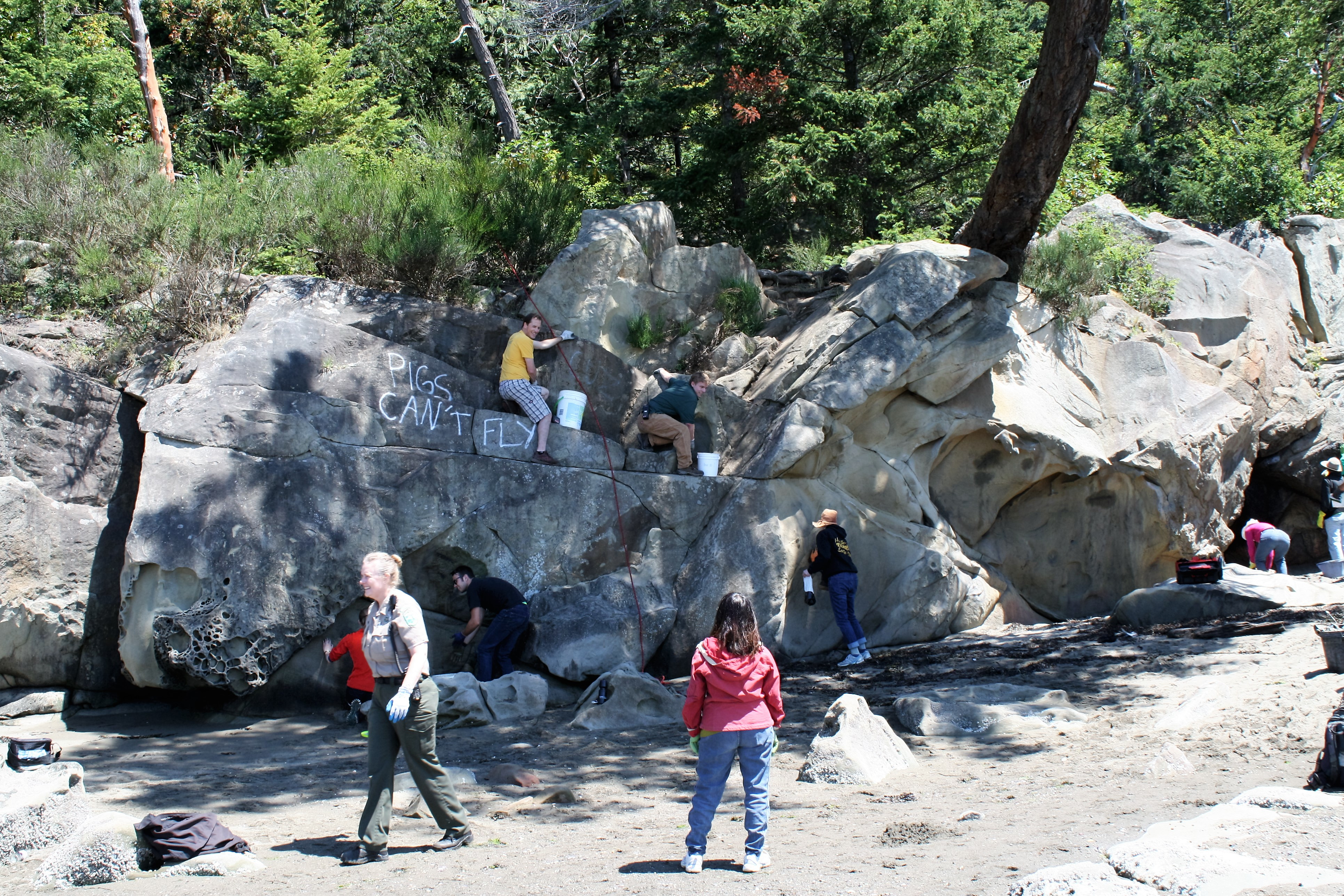 As happens all too often, vandals enter these naturally scenic wonders and for some reason feel compelled to spray paint them with their tags. Such happened in a big way in June. (8) The Larrabee State Park rangers got right on it, and along with WWU geologist George Mustoe formed a cleanup crew of volunteers who rallied to the beach with buckets, gloves and scrub brushes. In just a few hours, the graffiti was scrubbed off the sandstone.
At one point, I counted 70 volunteers, but a Seattle TV station that covered the event estimated there were 100 volunteers. That cleanup along with some winter waves and weather will soon return the sandstone to its natural state. 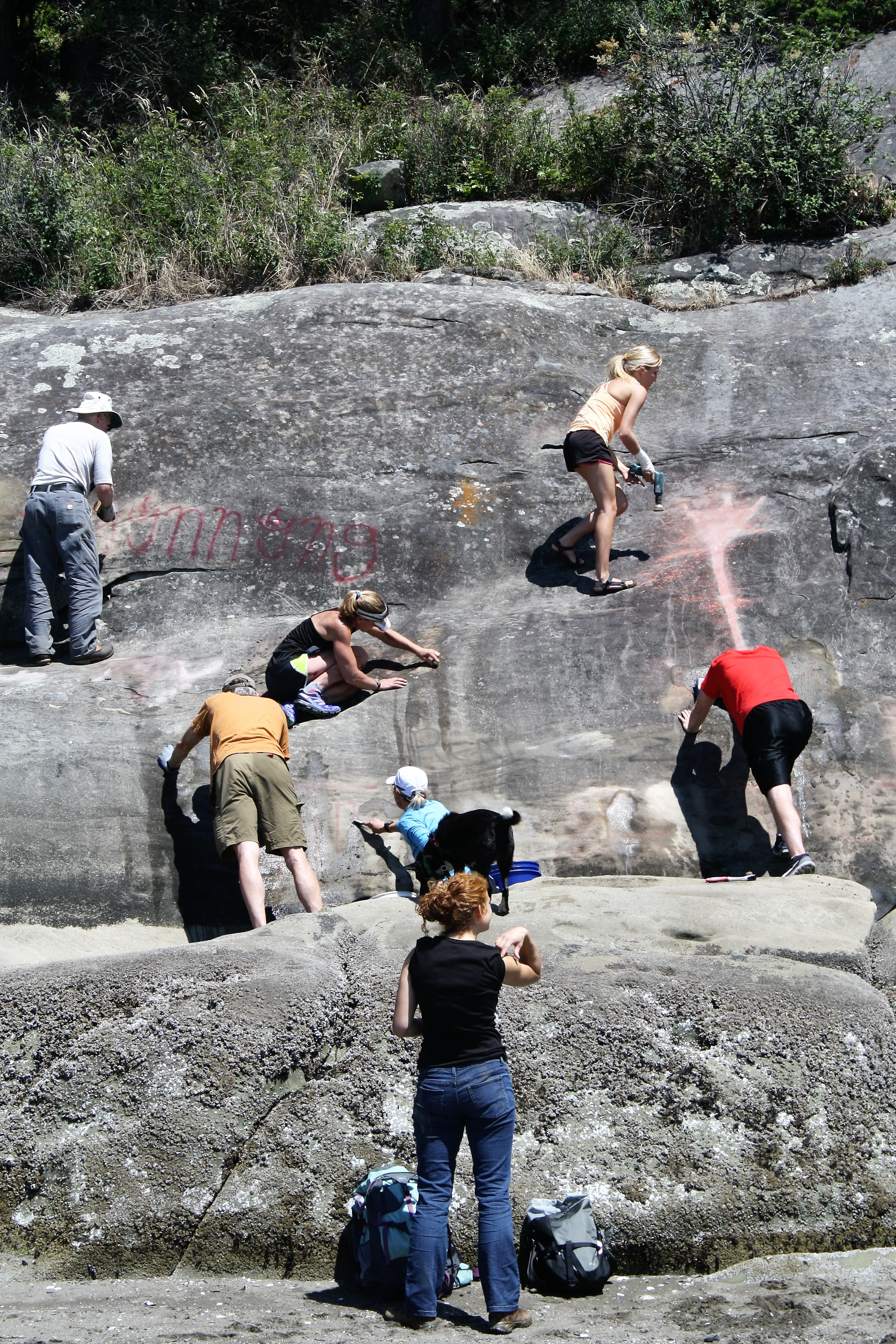 In addition to the larger shoreline rock structures, you will find intricate honeycombed sandstone rocks. These honeycombs are called tafoni, which appears to originate from Greek and/or Latin with meanings variously of  “tomb,” “window” or like openings. (9)
Tafoni are created by erosive processes that are the result of weathering and by erosion. Weathering involves various physical and chemical processes by which sand-sized rock clasts and minerals that make up the rock are loosened from freeze-thaw cycles that expand spaces between grains, and blowing sand or sediments from water pounding on the rock.  Chemical processes also contribute, such as combined water and carbon dioxide that weaken the mineral bonds holding rocks together. 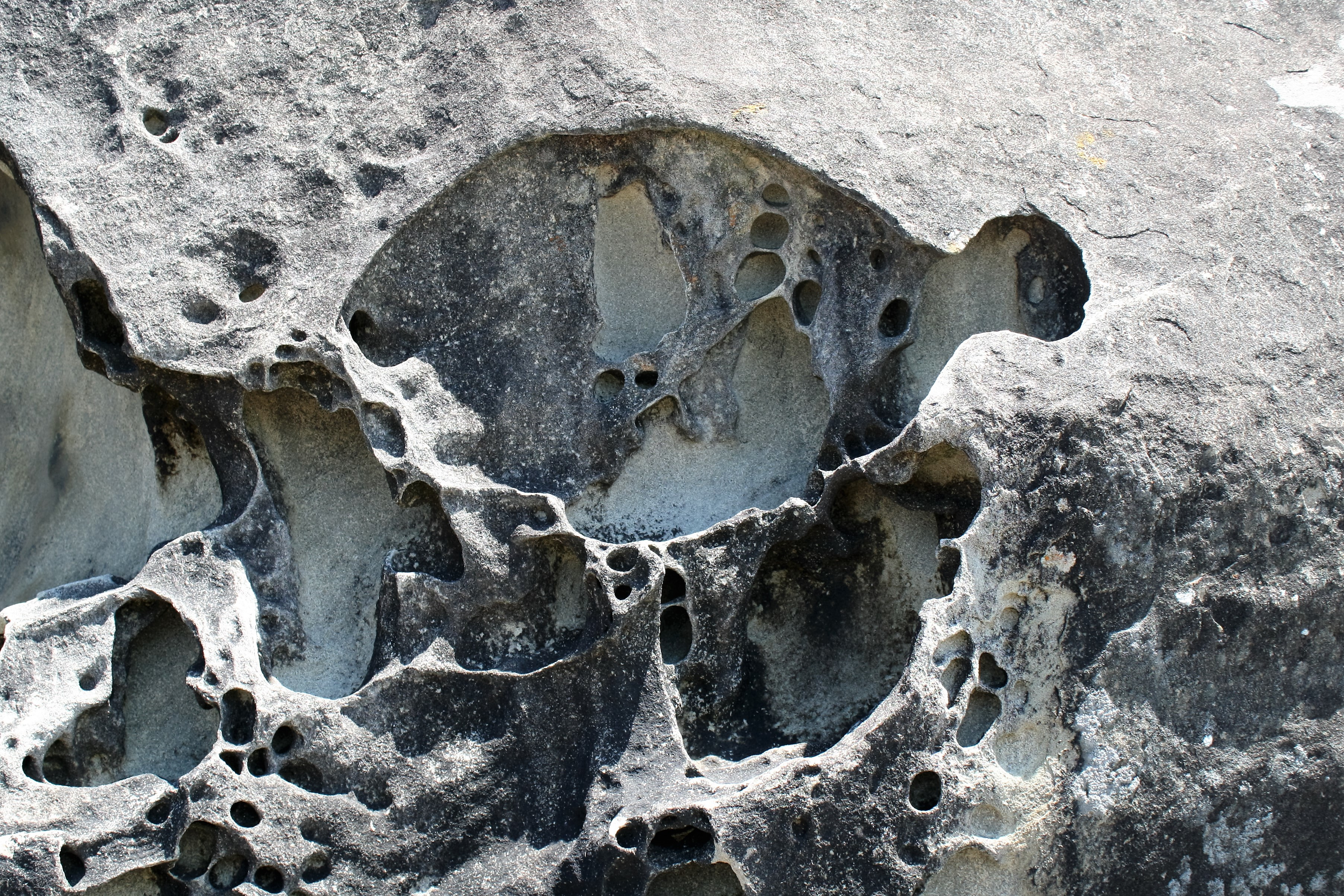 Once loosened, erosion from water pressure, wind and gravity removes the little clasts. Weathering and erosion account for the loss of grains and the eating away of the rocks. However, the honeycomb form consists of eroded cavities with non-eroded walls (septa) that separate the holes. What appears to account for septa not eroding is that algae are present that protect the rock from the weathering processes. Surfaces without algae are eroded and leave the honeycomb-like holes. (9)

Building Stone
Chuckanut Sandstone was also a prime building material used in Bellingham and Olympia. Further, it was used to rebuild both Seattle and San Francisco after their devastating turn-of-the-century fires.

The first Chuckanut quarry opened in 1880. Henry Roeder, having owned a tug and barge, towed the quarried and finished sandstone blocks to Seattle and Olympia. Roeder eventually bought the quarry and turned it over to his son-in-law, Charlie Roth. Roth later built the Lottie Roth Block, which is still standing at 1106 Holly St. (5) 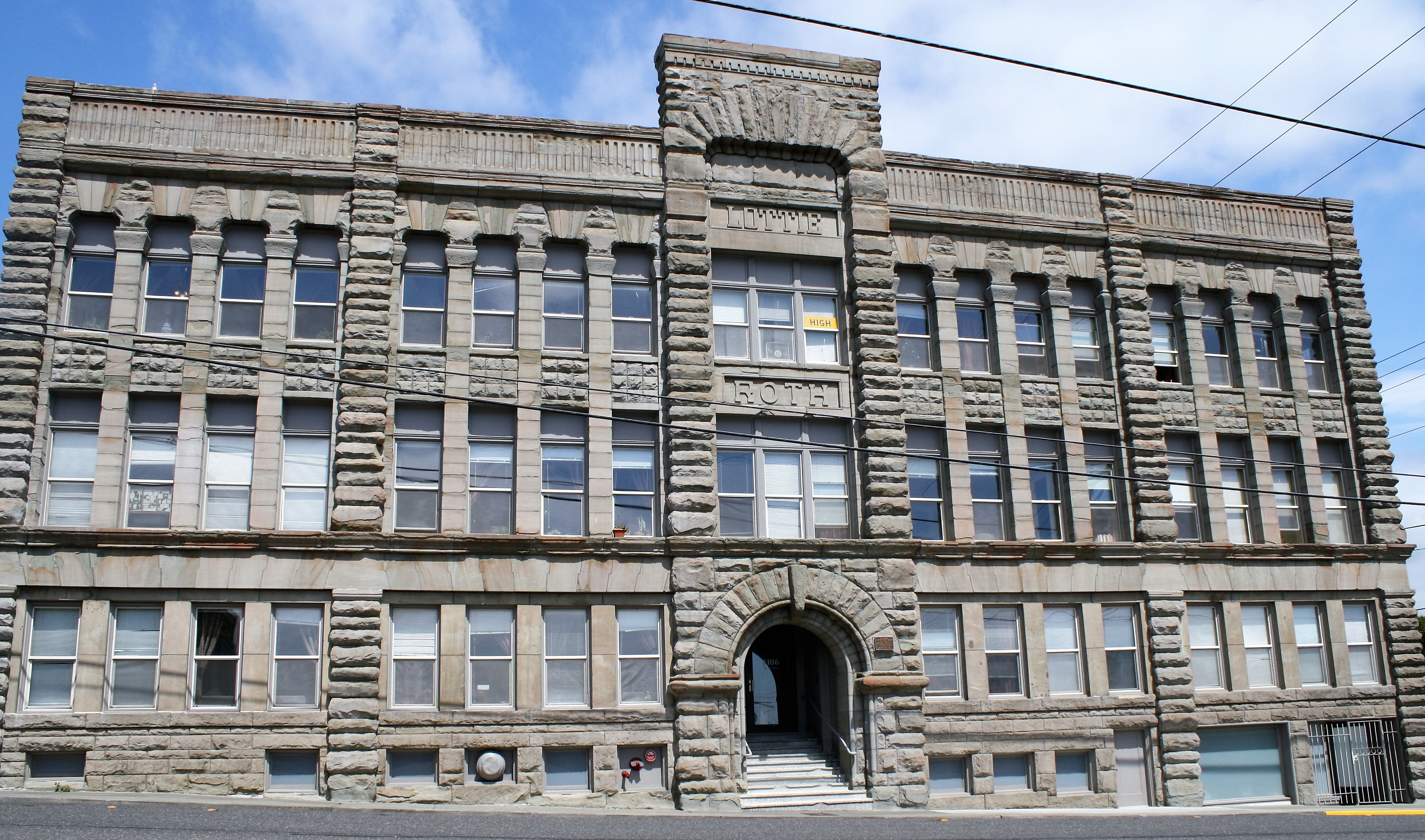 We are informed by Robert Thomas in his Chuckanut Chronicles (1971-92) that: “Nearly all of the early-day buildings, those of the U.S. Government, the early territory, the state, county and city were put up with stone from the Roth Stone Quarry. Mr. Roth’s being a member of the state Legislature may have had something to do with this.”

The Roth Quarry sandstone was also used for the Armory on South State Street and the Pike Block in downtown Bellingham. After the Pike building was gutted by fire, its stone arches were taken down and used in the building of the beautiful Whatcom Falls Park Bridge by the Works Progress Administration in 1939.

Coal Mining
Seams of coal also resulted from our region’s ancient lush vegetation that decomposed into peat bogs and swamps. Over the eons and under pressure, the peat hardened into coal. Beginning in the mid-1800s some of the first non-native settlers in this region discovered the coal, and by 1855 mining operations were well underway on the waterfront. Although the coal was not of high quality, being bituminous and sub-bituminous, the mines produced for 100 years, closing in 1955 after honeycombing under Bellingham and Sehome Hill. There were some 11 separate coal mines throughout Bellingham and the Lake Whatcom area. (A good overview of the coal mines was published in Whatcom Watch by Alison Bickerstaff in 2003 that included descriptions of the mines under Bellingham. (10)
Walter Johnson, who worked in the Bellingham Coal Mine from 1941 to 1950, said the old Sehome mine ran under State Street below Western Washington University.

“The Sehome mine entered near the foot of Cornwall Avenue below State Street. It went under downtown and under part of Sehome Hill,” he said. “That coal vein ran under Railroad Avenue and Holly Street, and it was mined out there. At the intersection of Railroad and Holly one time back in late 1940s, a cave-in occurred.”

He said a huge hole opened up big enough to swallow automobiles. “It was right by the Mason Building site where they’re building a new building there now,” Johnson said. “The hole was filled right away and paved over.” (11)

Finally, in addition to the historical and the economic value that the Chuckanut Formation afforded Whatcom County residents in the past, it continues to provide great recreational value today. Chuckanut Mountain is crisscrossed with hiking and biking trails leading to spectacular views of the Cascade Mountains to the east and the San Juan Islands to the west. Thousands of residents and tourists avail themselves of Larrabee State Park for camping and its wonderful shoreline and beaches along the foot of the mountain and by the bay, all thanks to the 50-million-year-old swamps.

Ron Kleinknecht is professor emeri­tus of psychology and dean emeritus of Western Washington University’s College of Humanities and Social Sciences. He is a lifelong nature and conservation enthusiast who writes about the Pacific Northwest. This article is based in part on posts previously published on Daily Kos under the user name RonK.