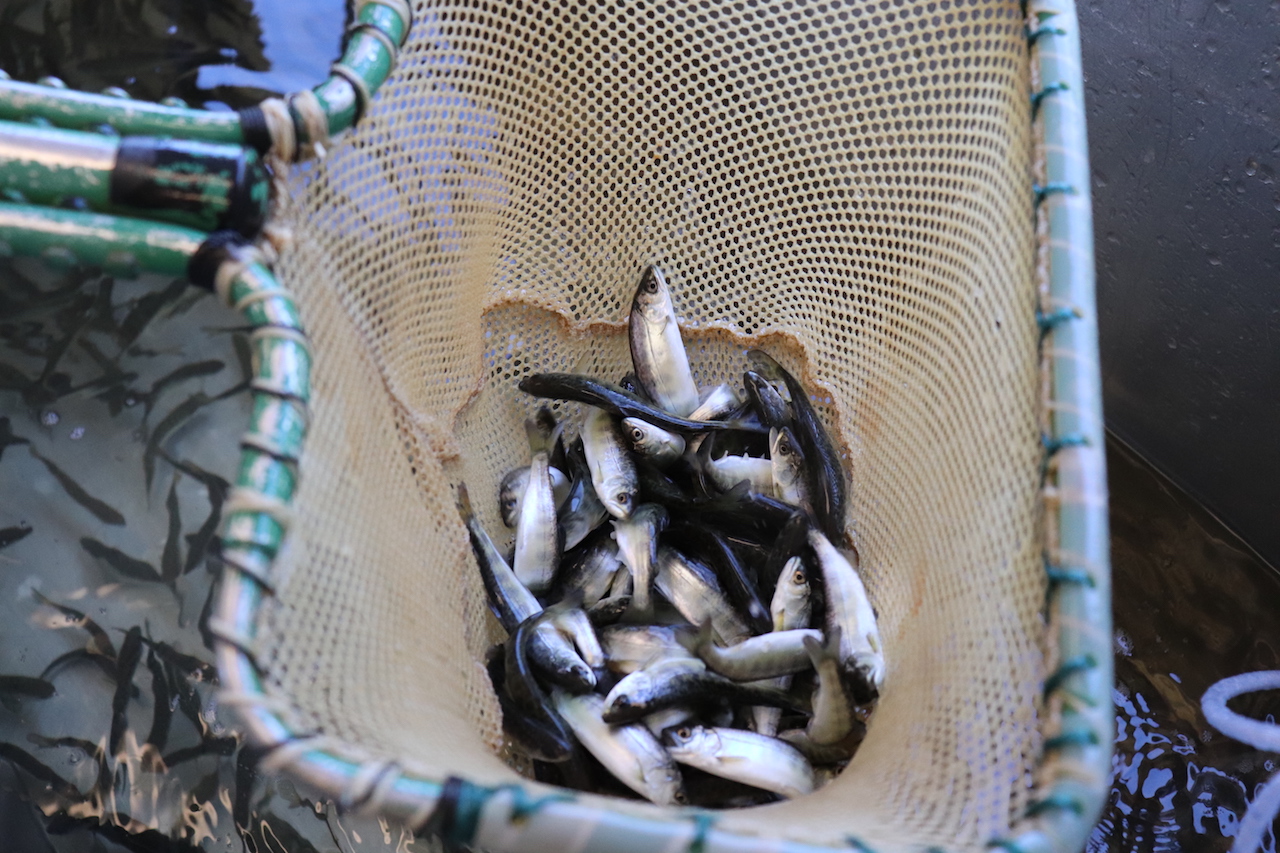 Juvenile Chinook salmon in a net at Whatcom Creek hatchery on May 16, 2021. The salmon were raised from eggs by students from Bellingham Technical College. This is an example of the efforts by the college and the Lummi Nation to enhance dwindling salmon stocks.
Photo by Sadie Fick, The Planet Magazine

No word yet on actual numbers …

To an outsider, the simple trailer sitting outside the Whatcom Creek hatchery in Maritime Heritage Park may not seem like much. Yet, inside, the renewal of the iconic Pacific Northwest symbol is taking place. It’s there that Loren and Anna Cultee, along with their team of three other Lummi Nation hatchery technicians, delicately remove the adipose fin of juvenile Chinook salmon.

The adipose fin is a small snub of a fin located near the tail on a salmon’s back. This marks the fish for life as an organism that has been raised by humans, which is essential for the survival of Chinook salmon. Students at Bellingham Technical College raised these Chinook salmon from eggs. Hatchery operations, such as the one at Whatcom Creek, are a part of a broader effort to help rebound the declining Chinook salmon. Lummi tribal hatchery, Skookum Creek Fish Hatchery on the Nooksack River, is another example of the success in rehabilitating declining Chinook salmon stocks. (1) 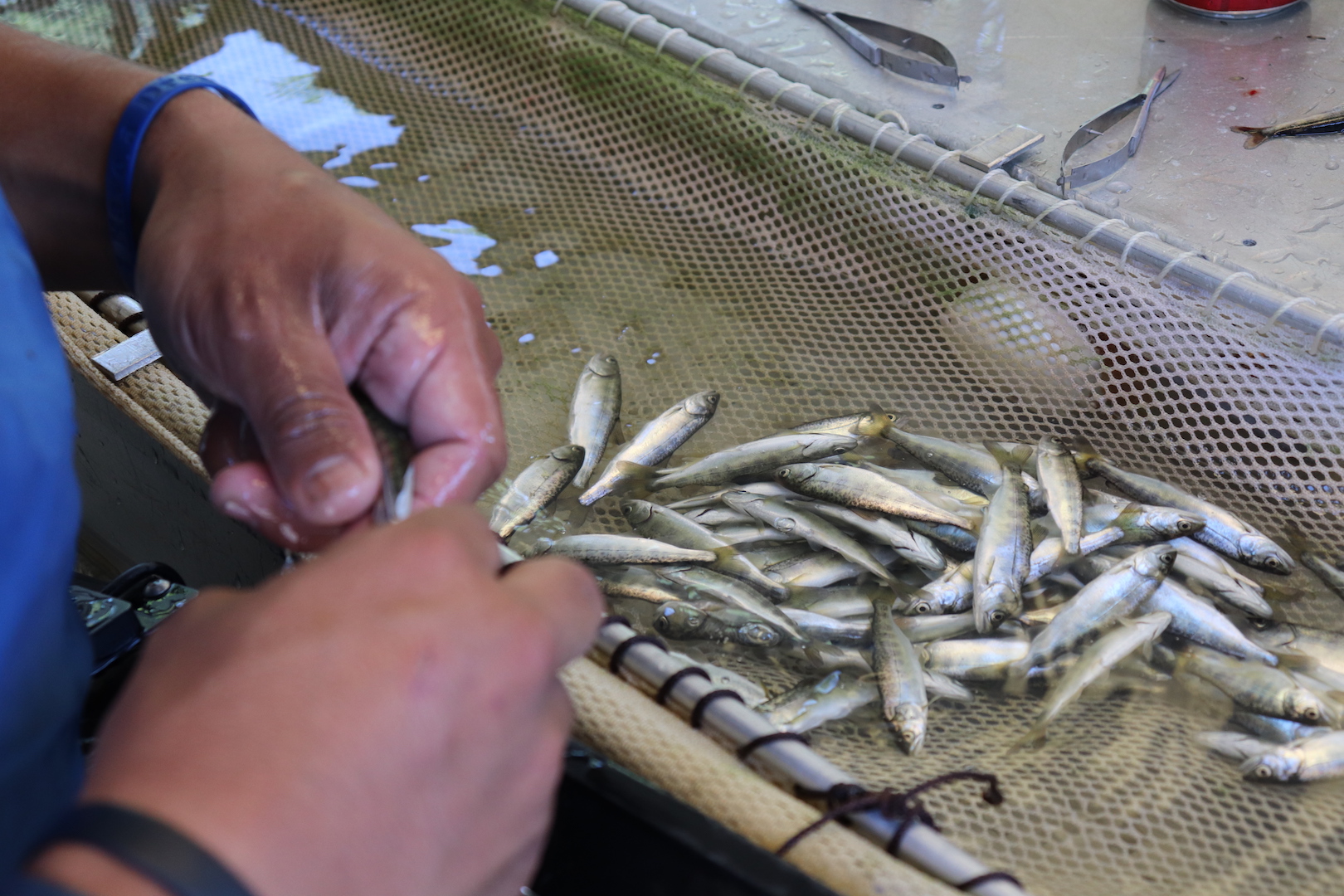 Christopher Cultee Jr., a member of the Lummi Nation, clips the adipose fin off a juvenile Chinook salmon at Whatcom Creek on May 16, 2021. The removal of the adipose fin marks the salmon as a hatchery-raised fish for life.
Photo by Sadie Fick, The Planet Magazine

The Nooksack River was forecasted to have a strong run of spring Chinook salmon, according to the Washington Department of Fish and Wildlife. (2) The Lummi Nation and Nooksack Indian Tribes did not fish on spring Chinook salmon for 40 years in order to ensure the return of these fish.(3) A strong return of Chinook salmon this spring (2021) would be tremendous news for the communities and cultures that interact with these fish according to Dana Wilson, a Lummi Nation Tribal Member. (4)

(Spawning surveys for spring Chinook salmon will be conducted during the late summer and early fall 2021. It will be during this time that the salmon forecast/actual run numbers will be assessed.)

Current spring predictions suggest the North Fork of the Nooksack River will see 7,540 returning Chinook salmon and the South Fork will have 7,248. (5) This year’s Nooksack River forecast nearly doubled from the year before. (6) It stands in sharp contrast to other rivers in the Puget Sound, like the Skokomish, which is projected to have a Chinook run that is down 5,115 fish from the 2020 forecast according to the Washington Department of Fish and Wildlife’s salmon forecast. (7)

“This is our part in giving back and trying to expand that population of salmon so that way it can give back and feed our families,” said Anna Cultee, a Lummi Nation tribal member. (10)

“The hatchery fish is as close as we are ever going to get to a wild stock,” said Wilson. (13)

There are groups such as Wild Fish Conservancy that don’t want hatcheries due to hatchery-raised fish competing with wild fish stocks, according to Shannon Moore, a local commercial fisherman. (14)

The Lummi Nation Skookum Creek Fish Hatchery, in cooperation with the Washington Department of Fish and Wildlife, the National Oceanic and Atmospheric Administration, and the Nooksack Tribe, has essentially brought that population back from the brink of extinction, said Ryan Vasak, a former fisheries biologist for the Lummi Natural Resources Department. (15)

Despite a strong spring forecast for Chinook in the Nooksack River basin, the overall population trend has been going down in Washington. (16)

Part of the Lummi Nation’s salmon recovery strategy included stopping fishing on the Nooksack for 40 years according to Wilson. (18)

Human Footprint
The Nooksack River has changed drastically over the years to the point where the river doesn’t support salmon like it used to. (19) The human footprint has ultimately caused the salmon populations to decline in the Nooksack River according to Moore. (20)

“That habitat is so degraded that the reality of trying to bring back wild fish populations that we had 100 years ago, it ain’t gonna happen” Moore said.

Spawning grounds and holdover habitat for migrating salmon has decreased in the Nooksack River.(21) The riparian zone, which consists of plants and vegetation that grow alongside the banks of the river and provide shade to salmon, has been particularly degraded on portions of the Nooksack River, Vasak said. (22)

“Without a functioning riparian zone, you just don’t have the proper type of food production for those fish,” Vasak said. (23)

According to a 1994 report from the University of Minnesota, logging has played a major role in the degradation of Washington state salmon habitats. (24) The report found the removal of trees can hurt the watershed and drastically increase siltation and other harmful effects. (25) Siltation is the movement of sand and debris to nearby watersheds, which impacts the flow of streams. (26) It occurs when a hillside has been robbed of its vegetation, like trees. (27)

“In places that river was 15-18 feet deep, now you could walk across it, now there’s just so much silt,” Wilson said. (28) Despite the problems facing the Nooksack watershed, stronger runs of spring Chinook salmon will give back to the communities such as the Lummi Nation that helped save the species from extinction. The Chinook salmon provides a sense of livelihood and purpose to many tribal members according to Wilson. (29)

“We’re fortunate to live here and to be a part of the natural world here and have salmon as our mainstay of life,” (30) Wilson said. “I always say that, with the decline of salmon, for us as Natives, it’s that if the fish disappears so will we.” (31)

The very identity of the northwest is centered around the health of salmon runs. (32) For now, efforts made by the Lummi Nation, Nooksack Indian Tribe, and Bellingham Technical College are what remain for the survival of Chinook salmon.

“Every fish that we touch in there, we hope and pray that it comes back to us,” said Loren Cultee, a Lummi Nation tribal member who was leading the fin clipping operation at Whatcom Creek. (33)

Alex Morris is a senior environmental studies student attending Western Washington University. Alex is passionate about the wide world of fisheries and the relationships that people form with various species.