by Al Hanners and Vikki Jackson

Editor’s Note: The pond, located near the corner of Alabama Street and Electric Avenue, is abutted by the city Railroad Trail. In November of 1987, Scudder Pond was donated by Veda Armitage (in memory of her father Mr. Scudder) to the North Cascades Audubon Society so it would be preserved in a natural state. The Audubon chapter donated it to the city of Bellingham in October of 2014. The pond has been in the news lately because approximately a third of it is covered by a rare native plant called Azolla, which turns pink in cold weather. 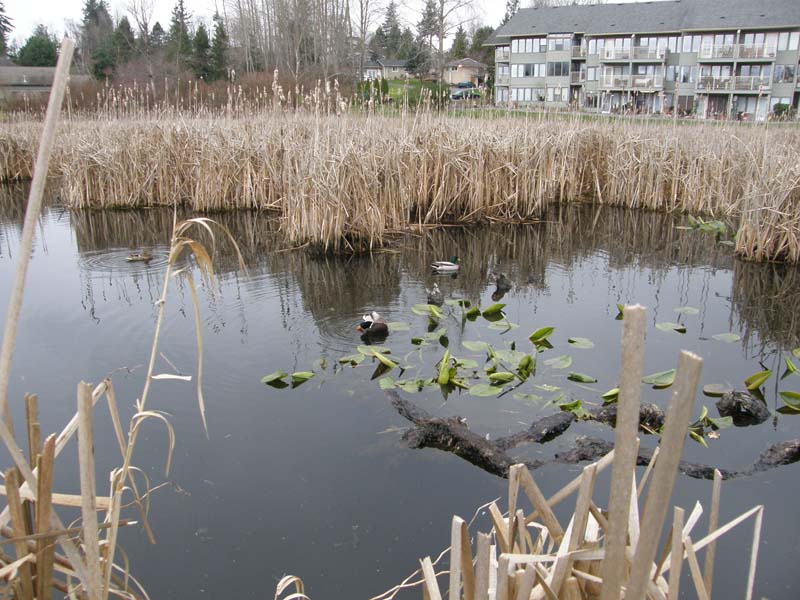 What to do about Scudder Pond is a question begging for answers. A 1987 study of the pond was done by Claire Cdebaca and Jeanne Funsch of Huxley College and and a summary was published in the May 1987 issue of the school magazine, The Planet. A photo that is part of the article shows the pond to be mostly open water with cattails (Typha latifolia) on the margins.

Since then the pond has become a marsh dominated by cattails. It has only about 20 percent open water in winter, and about half of that is choked with a monoculture of lady’s thumb (Polygonum persicaria) in summer. Lady’s thumb is an alien weed commonly dominating parts of shallow polluted lakes and ponds in western Whatcom County. In short, a marsh with two plant monocultures does not present an exciting view. More importantly, the present ecosystem with little structural and floristic diversity does not attract a wide variety of wildlife species.

The pond was formed by beavers that plugged the drainage through an abandoned railway grade that had been converted to a Bellingham city park trail. The city considered the water level a threat to its trail and unplugged the culvert. Human apartment dwellers on the west bank liked the pond and helped the beavers plug the culvert again.

The city unplugged it, and so it went on and on, seesawing back and forth. Finally, the water level was stabilized after the property owner gave the pond to the North Cascades Audubon Society. The new owner, the city, and the apartment dwellers reached a compromise on the position of the outlet culvert and agreed that it should remain open.

Doing Nothing or Next to Nothing
Any significant attempt to increase the open water at Scudder Pond would require a considerable expenditure of volunteer labor and money. It might require diligent pursuit of permits, difficult negotiations, and compromises that would not achieve lasting objectives. Some changes might not be net improvements.

Cattails grow in water up to 3 or 3 1/2 feet deep. The culvert is about 2 1/2 feet below the lowest spot in the trail over the old railway grade forming the dam. Thus, by hindsight, one sees that the culvert was set at a level ideal for spreading cattails through the pond.

If, instead, had the water level been controlled by a broad concrete spillway set about 6 inches below the lowest spot on the trail, water would have been deeper and there would be no cattail marsh today.

Beaver Control
The pond was originally controlled by beavers, but now people control the water level by keeping the outlet culvert open. If the present drainage policy is maintained, the property is likely to remain a cattail marsh. If one wants open water, the beavers were right; but of course, they were not concerned with protecting the trail nor the cheapest way to do it.

A cattail marsh is not all bad. Red-winged blackbirds and mallards nest there, and blackbirds commonly use cattails as perches. Beavers eat cattail roots; muskrats eat cattails and use them to make their homes, and native amphibians breed there. Open water is beneficial to alien bullfrogs that compete with our native species. Therefore, if there were more open water near the shoreline and we started more aquatic plants beneficial to amphibians, there might be no net gain.

There used to be numerous catails, many other native plants, and excellent places for a variety of wildlife to breed along the shores of Lake Whatcom. Now the lakeshores just about anywhere near Scudder Pond have been converted to boat docks and grassy lawns.

Options for Change
The Columbia National Wildlife Refuge near Potholes State Park in Eastern Washington has a program of cattail eradication and replacement by plants considered generally more useful to waterfowl. Here are options applied to Scudder Pond outlined by refuge biologist Randy Hill, and by suggestions from biologist Bob Zeigler of the Washington State Wildlife Department.

Cattails do not grow in water more than 3 to 3 1/2 feet deep. Removal of accumulated silt and decayed cattails by dredging is the only really long-term solution to maintain open water. Dredging is not recommended as it is too expensive and would require complex permitting including the U.S. Army Corp of Engineers and the Washington Department of Ecology. Moreover, it would be almost totally disruptive to wildlife now using the marsh.

If the water level can be controlled adequately, two other useful options are feasible. Raising the water level to deepen the pond could flood out the cattails. This may be feasible at Scudder Pond by raising the outlet, and possibly by raising the trail level. This option will be discussed in detail below. Alternatively, if the pond can be completely drained, a tractor and disc can be brought in to destroy the cattails. This option is not recommended as it would be too expensive and too destructive to plants and wildlife. In addition, it is doubtful that the pond could be adequately drained.

Removing Cattails
If the water level cannot be controlled, there are very few options and none of them is long term. Short-term methods include hand pulling and application of chemicals. Hand pulling is labor intensive and it is difficult to remove the entire base of the plant.

Cattails can be killed with the chemical Rodeo. It is similar to Roundup but is made for application in wetlands in late spring or summer when cattails are growing and roots are killed. As it also kills all parallel-veined plants such as grasses and sedges, not just cattails, it would be best to swab it on the cattails instead of spraying. A second application might be needed to kill cattails missed by the first applications. Rodeo does not last very long except possibly in the roots. Therefore, it might not be a serious threat to most wildlife, but it might be rough on beavers that eat cattail roots. A permit from the Department of Ecology probably would be required.

Advantages of Adding Logs
Adding whole logs with root masses to Scudder Pond is an option for inexpensive improvements without changing the water level or removing any cattails. A whole log with root masses is certain to be a focal point for visitors. It would attract attention to an otherwise monotonous cattail marsh by providing structural diversity, especially if there is a bird, amphibian, or plant in flower on the log.

This option would require permits from the U.S. Army Corps of Engineers, the Department of Ecology, and the city of Bellingham. However, it could be relatively inexpensive by requiring only the cost of a dump truck and an excavator if donated logs could be found.

Raise the Water Level
If the area of open water is to be increased at Scudder Pond, raising the water level is recommended as the best way to achieve that goal. From physical and financial points of view, it would be easy to raise the water level two feet by installing a broad concrete spillway six inches below the lowest point on the trail, covering it with a footbridge, and plugging the present outlet culverts. Water could be raised higher by raising the trail level, but that would be more expensive. The principal concerns would be securing permission from the Bellingham Parks Department to change the outlet, and possible flooding to the apartment property at the west shore. If the city resolutely rejects changing the outlet under its trail, this option should be dropped.

Topographically, the water level could be raised at least five feet without being a threat to the apartment buildings. A boundary survey should be done before making a decision to raise the water level.

When this article was published, Al Hanners was a past president of the local chapter of the Washington Native Plant Society and Vikki Jackson was the the current president.