Since January 2014, Whatcom Watch has been rerunning articles from issues printed 20 years ago. The below article appeared in the March 2002 issue of Whatcom Watch. 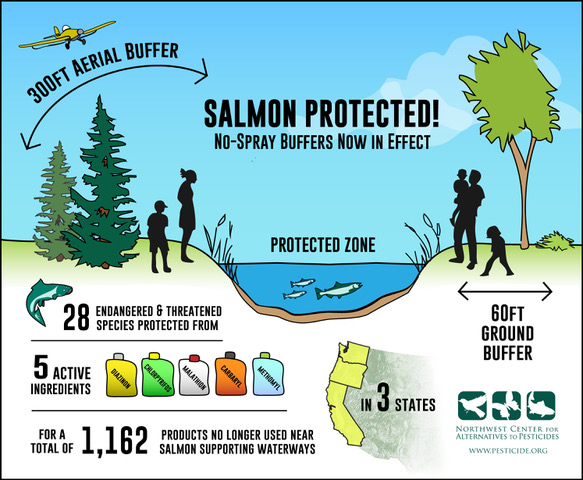 Pesticide contamination of rivers and streams in the Northwest is extremely widespread and is causing harm to salmon. That’s the conclusion of Poisoned Waters, a new report published by the Washington Toxics Coalition and the Northwest Coalition for Alternatives to Pesticides.

The two groups completed a first-time analysis of government studies on pesticide contamination of salmon streams, and obtained definitive evidence that pesticides pollute salmon streams at levels that cause harm. The groups also analyzed the Environmental Protection Agency pesticide registration documents and found glaring deficiencies in the agency’s actions to protect salmon.

The report’s major findings are as follows:

• Sixteen pesticides pollute our waters at levels harmful to salmon. These pesticides have been found at levels that exceed standards set to protect aquatic life, indicating that they are likely to currently cause harm to salmon.

• EPA findings reveal that allowed uses of 36 pesticides are likely to harm salmon. The EPA has made determinations for three dozen pesticides that they are likely to pollute waters at levels that threaten endangered salmon, but has allowed their use despite the danger to salmon.

• EPA has failed to uphold the Endangered Species Act by not submitting detailed assessments of pesticide threats to salmon and restricting pesticide uses when threats are found. The Endangered Species Act requires EPA to submit assessments to the National Marine Fisheries Service, but EPA has failed completely to obey the act despite the ten years since the first salmon listing.

Three pesticides were found in the stream at levels that harm aquatic life including salmon. Government agencies, individuals, and commercial pesticide applicators share the blame for the use of pesticides that harm salmon in Thornton Creek.

The Department of Ecology sampled four sites in Lake Whatcom and Whatcom Creek in June and October 1998, for a total of eight samples for most pesticides. Fourteen pesticides and one breakdown product were detected out of 110 analyzed. At least five pesticides were detected in all but one sample.

Three pesticides were found at levels exceeding criteria set to protect aquatic life—chlorpyrifos, diazinon, and malathion. Pentachlorophenol was detected at one site at levels exceeding the human health criterion set under the National Toxics Rule.

Seven of the pesticides detected in the Whatcom Creek/Lake Whatcom Watershed have been detected in our region at levels at or above standards to protect aquatic life.

Although the testing completed in this watershed was relatively limited, with only two samples in each location for a total of just eight samples, it found significant contamination. The results clearly indicate that pesticide pollution is a serious problem for the health of Lake Whatcom and Whatcom Creek, for both the people and the salmon that use this water.

The pesticides present at levels exceeding standards to protect aquatic life were chlorpyrifos, diazinon, and malathion. All three of these insecticides have extensive home uses, as well as uses by institutions and in agriculture. A shelf survey of pesticides sold in Bellingham retail outlets found a number of products containing these ingredients.

Clean Water for Salmon
More than 70 clean water, fishing, salmon recovery, faith-based, and civic groups agree that strong and swift action is necessary to get pesticides out of our waters and protect salmon. These organizations have joined the Clean Water for Salmon Network by endorsing the campaign Statement of Support, which calls for the following measures:

• Phase out the use of pesticides that are hazardous to salmon and their habitat.

• Adopt measures to keep pesticides out of water needed for salmon survival.

• Promote and adopt salmon-friendly practices that reduce reliance on pesticides.

Poisoned Waters also presents specific recommendations for government agencies to protect salmon from pesticides. Among them:

1. EPA must comply with the Endangered Species Act by phasing out the use of pesticides that harm salmon and keeping all pesticides out of water. Until now, EPA has shirked its duty to make sure that the pesticides it allows for use do not contaminate water at levels that harm threatened and endangered salmon. EPA must act quickly to begin evaluating all the effects of pesticides on salmon and immediately restrict or eliminate pesticide uses where hazards are found.

3. States should stop the use of pesticide products that harm salmon or their habitat by phasing out and restricting their use. Washington state has taken steps toward addressing the threats pesticides pose to salmon by establishing the state Pesticide/ESA Task Force. This task force is just beginning to assess the impacts of pesticides on salmon, and it is expected to recommend restrictions on pesticides to the Washington State Department of Agriculture. The task force and Department of Agriculture must ensure that salmon are protected by phasing out the use of pesticides that are found in our streams at harmful levels.

4. Local governments should make pesticide use reduction a core element of salmon recovery. Seattle and King County have led the way in Washington state by eliminating their use of the most hazardous pesticides and taking steps to reduce the rest. All cities, counties, ports, and school districts must pass ordinances or policies to eliminate their own use of pesticides that threaten salmon and human health, and replace pesticides with salmon-friendly alternatives.

5. States must establish pesticide use reporting systems to aid in salmon recovery. Government agencies and salmon recovery groups need information on what pesticides are used where and when in order to effectively target their pesticide reduction efforts.

The report also calls on farmers and individuals to replace pesticides with salmon-friendly alternatives, and calls on land grant universities to orient their research, extension, and education toward sustainable pest management practices rather than pesticides.

Residents in the Lake Whatcom and Whatcom Creek watersheds can help reduce pollution by taking the Watershed Pledge to reduce home use of pesticides and other toxics. The pledge is available from RE Sources for Sustainable Communities at (360) 733-8307.

Erika Schreder has been employed by Toxic-Free Future (formerly the Washington Toxics Coalition) since 1997. She is the science director, the leader of the research program. Topics have included testing flame retardants, tracing the path of toxic chemicals from the home to waterways, and biomonitoring pregnant women for BPA, phthalates, and other chemicals.