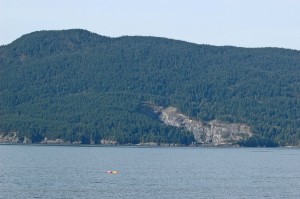 Following two years of intense negotiations with the court-appointed receiver, Lummi Island Heritage Trust has secured a deal to purchase the 105-acre Lummi Island quarry property. The property includes 4,000 feet of shoreline opening onto Smugglers Cove and Hale Passage on the southeastern slope of Lummi Mountain. A 20-acre scar created by decades of mining is visible from Bellingham, to as far north as Gooseberry Pt. and south to Chuckanut Drive.

The Trust will implement an extensive restoration project at the site. once the acquisition is completed. The first phase of the project will be determining reclamation strategies for approximately 20 acres of uplands damaged by mining as well as restoration strategies for approximately 500 feet of the shoreline used for barging rock and gravel from the mine.

The Heritage Trust will partner with Northwest Straits Foundation, Whatcom County and Washington Department of Natural Resources to repair and re-vegetate the land and shoreline to a more natural state, while making sure the area is safe for what will one day be a saltwater access preserve for low impact public use.

The two-year purchase effort was fraught with uncertainty as the receiver marketed the property for mining and residential development. A last minute offer from a mining company threatened to trump the Trust’s offer, but an emergency bridge loan from concerned citizens enabled the Trust to prevail. The deal was finally closed on September 30, 2015. During these two years of negotiation, the Heritage Trust has worked diligently to secure grants and private donations, now totaling $1,080,000 toward the total acquisition cost of $1,550,000. The acquisition cost includes purchase of the property and funds required to safeguard stewardship into the future. A capital campaign is being launched to raise the remaining funding.

The property has both local and regional conservation significance and has attracted numerous partners for the purchase and restoration. The Puget Sound Marine and Nearshore Shore Program has awarded a $600,000 Marine Shoreline Protection grant and Whatcom County has committed $400,000 toward the purchase. The Rose Foundation has awarded $100,000 to begin restoration feasibility work. Other partners include the Northwest Straits Foundation, Washington Department of Natural Resources, Washington Department of Fish and Wildlife, Whatcom County Marine Resources Committee, and many private individuals. Whatcom County Parks and Recreation will acquire an easement with the Heritage Trust to help develop a low impact saltwater access preserve in the future.

Once an industrial eyesore to kayakers, fishers and boaters, the scenic shoreline will be restored and once again become home to a variety of marine creatures: eagles, herons, loons, migrating shorebirds, otters, and seals among them. The over 80 un-mined upland acres consist of mature forest habitat, providing home to native plants and wildlife. These include local priority species like Pileated woodpeckers.

Established in 1998, the Lummi Island Heritage Trust is a nationally accredited land trust. With this project, the Trust has now conserved 1,088 acres of land on Lummi Island. As development threatens the natural areas of Whatcom County, the San Juan Islands and the entire Puget Sound basin, conservation of remaining habitat and open spaces becomes increasingly urgent.

To this end, Lummi Island Heritage Trust is inviting the greater, off-island community to help raise the remaining funds needed to complete the acquisition phase of this project. Restoration of the scenic shoreline view seen from Bellingham and Chuckanut will be but one of the benefits to the broader community. Local fisheries will benefit from enhanced salmon and crab habitat, and in the future a low impact saltwater access preserve will allow small boat and pedestrian access.

To learn how concerned citizens were instrumental in successfully working with community and government to bring about this significant conservation opportunity, look for a follow-up article in the December issue of Whatcom Watch.