Life Returns to Whatcom Creek: One Year After the Pipeline Explosion 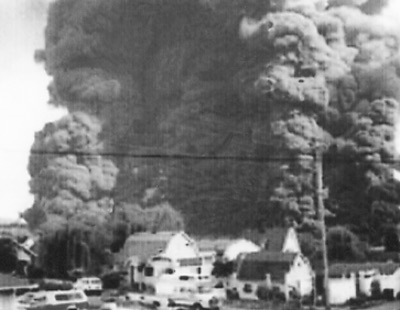 Flash Fire
The June 10, 1999, pipeline rupture spouted a deluge of gasoline that eventually ignited, and in a flash flood of fire, scorched the wildlife and vegetation that once made the creek its home.

“It’s unique because it was so much hotter than the average forest fire,” said Virginia Stone, a Huxley College graduate student who has done extensive water quality studies on Whatcom Creek. “Forest fires normally don’t burn in riparian zones, whereas this one was centered in one.”

While devastating for the riparian, or streamside, zone, the speed of the fire may have actually saved some vegetation from wholesale extermination. Forest fires typically burn much longer, and may smolder for days.

This fire was different — the fuel was gasoline, instead of vegetation, and it scorched the area, rather than actually consuming it, said Mary Jo Sanborn, an employee of Bellingham Public Works. “There’s been quite a bit of regrowth, since many of the root systems weren’t necessarily burned,” Sanborn said.

Of course, the creek has had one year to recover after 229,950 gallons of fuel filled the streambed of Whatcom Creek.

“One of the theories,” said Mark Henderson, a water quality specialist at the Department of Ecology, “goes that there was so much product in the creek, it displaced the water in the creek, just pushed the water aside … and went right down into the sediments.”

Kill Zone to the Bay
Initially the kill zone for aquatic life extended more than three miles to the mouth of Whatcom Creek at Bellingham Bay, and the riparian area was burned for more than 1.5 miles.

The fireball wiped out understory vegetation such as bushes and grasses, and much of the canopy vegetation. With the loss of the vegetation came the loss of habitat for all of the life forms in the riparian area.

The foliage usually provides shade to keep the water temperature in the mid-50 to low-60 degree range. Higher temperatures can be lethal to cold-water adapted salmon.

Sediment, with no vegetation to hold it in place, eroded into the creek.

“We don’t have any good base data on fish use in the stream (prior to the explosion),” Fogelsong said. “We do know what we collected dead out of the stream — several thousand dead fish of all kinds.”

Early reports estimated 30,000 dead fish, along with a few dead birds and rodents. Fogelsong was unable to comment because the long-term restoration plan is not yet published, but acknowledged that the figure was within a reasonable range.

“Everything in the creek was dead,” Henderson said. “All the way to the bay.” Worms floated dead. All types of insects were gone.

So far, Olympic has paid for all the restoration proceedings and hired professionals to do the jobs. Not including legal fees, Olympic has spent more than $50 million so far, according to Brian Conoly, Olympic’s chief financial officer.

“Olympic and their managing partners have taken full responsibility for the financial obligation for emergency restoration … they’ve also taken the initiative to fund some of the early action restoration plan elements,” Fogelsong said.

“A lot of times (after a spill) they focus on remediation and cleanup right away, and the restoration is something that comes later, once they’ve decided what the damage has been. It can take years before restoration really gets started,” Sanborn said. “This group decided that they wanted to do emergency restoration right away, by using the JRC.”

The committee is made up of representatives from the city of Bellingham, the Washington state departments of Natural Resources and Ecology, the National Oceanic Atmospheric Administration (NOAA), the Nooksack Tribe, the Lummi Nation and Olympic.

The committee makes recommendations to the trustee group, which includes any agency that represents some sort of public resource that was damaged or lost, as well as Olympic.

Any action on Whatcom Creek has to have full and total agreement by all the members of the Joint Restoration Committee. Any disagreements that may arise between the agencies on the best way to proceed have to be worked out before anything progresses.

Cleaning the Creek
The gasoline that soaked into the ground is a defining factor of the ecological damage. Normally in oil spills the gasoline doesn’t actually soak in: The properties of oil cause it to float. Because the leak went undetected for so long, however, the gasoline not only inundated the creek; it saturated the soil.

Once water started flushing out the gasoline, Sanborn said, the assumption was that the product would leave the system. But anytime anyone kicked at sediment in the creek, the telltale dull rainbow sheen would appear.

Crews responded with a process called agitation, which involved literally moving every rock through the whole burn zone of the creek, with both human crews and machinery, bringing the gasoline to the surface.

Groundwater Contaminated
A surface cleanup was not enough. Gasoline also penetrated the groundwater by the Bellingham Water Treatment Plant near where the leak occurred. In that area all the groundwater flows into both Whatcom and Hannah creeks, so the gasoline seeped continuously.

“It went down into the ground and hit the bedrock and came out through seeps along Whatcom Creek,” Henderson said. “It was so thick it was coming out like vegetable oil. It wasn’t just a sheen on the water — you could have gotten gasoline off the water.”

Soil Removed
Literally tons and tons of contaminated soil (some 5,000-plus cubic yards) had to be trucked from the burn zone and disposed of as hazardous waste at refineries in Bellingham, Tacoma, and Oregon, and new soil had to be brought in.

“The stream remediation project included a re-sculpting of the streambed itself,” Fogelsong said. “Steps were taken … to improve some of the fish characteristics.” This process includes adding woody debris, like tree trunks, to the channel banks, which provide cover and refuge habitat for the fish until the vegetation can recover.

Replanting Trees
In the first weeks of April 2000, over 2,000 trees had been planted. The trees were all native species, mostly conifers, with wild cherry, alder and cottonwood.

“We’re making suggestions to the contractors. The plantings will be done on a performance-based schedule, which means that when we get the canopy back that’s required to replace the loss, then that’s when the project is successful,” Fogelsong said. “It’s not going to be tied to a certain amount of plants going in.”

Fish migration is now studied in the creek. Special attention is focused on the macro-invertebrates, the bugs, clear indicators of the health of the ecosystem, not to mention the source of sustenance for salmon. The Joint Restoration Committee is reviewing a long-term restoration plan developed by Olympic with direction from the Joint Restoration Committee. Once it is approved, it will be available for public review in June. The long-term plan will access such sweeping concerns like invasive species control and salmon health.

“The restoration plan will outline the long-term programs that will be in place to compensate for the loss … there will probably come a time in the future where the city and its local partners will continue to restore the stream on its own (without Olympic’s financial assistance),” Fogelsong said.

“When you talk about having the creek back, different components are going to come back accordingly … water quality has improved significantly daily … on the other extreme, you have 80 to 100-year-old trees that were burned. To replace those, it doesn’t take a mathematician to know it will take 80 to 100 years to replace them.”

Community Effort
“Something that’s getting lost in the whole story is that this community put a lot of effort in getting life back into Whatcom Creek,” Barbour said. “We visited 400 businesses door-to-door, asking them to take a look at their waste streams. We said ‘Let us come in and take a tour of your shop, and we can keep that ounce of oil out of the creek.’ Everything has an impact. And people were beginning to get it.”
_____________________________

Tiffany Campbell was entering her senior year at Western Washington University in 2000 and was majoring in environmental journalism and English.