Letter From the Standing Rock Protectors

by Karin Kraft and Aleta DeBee 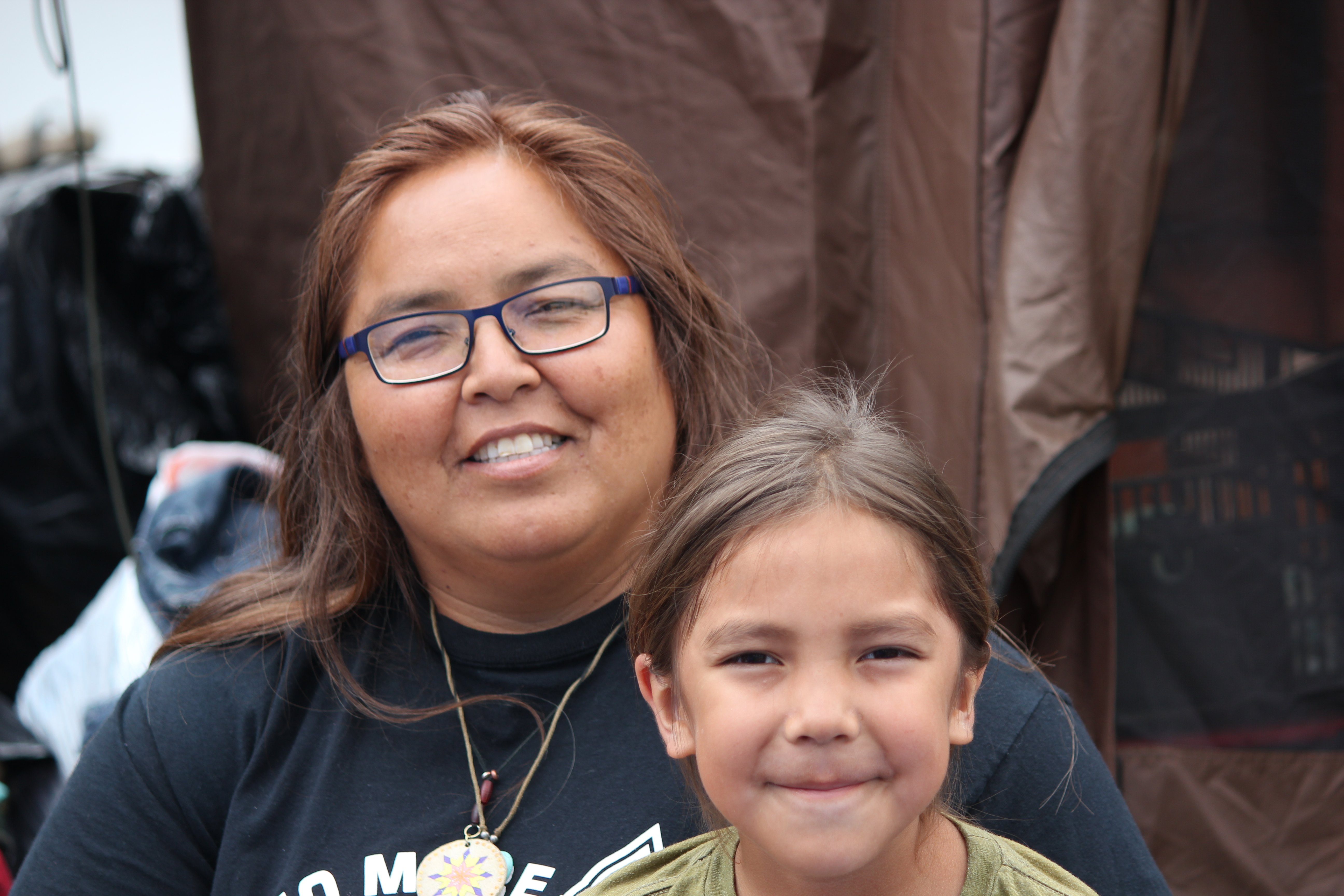 Joely Big Eagle-Kequahtooway and her son at the Sacred Stone Camp in North Dakota.

Hundreds of tribes from the United States and Canada are gathered along the Cannonball River next to the Standing Rock Sioux Reservation in North Dakota. They’ve come together to stand as one in opposition to the Dakota Access Pipeline. The camp is located on treaty land ceded by the Sioux Nation (Oceti Sakowin, or Seven Council Fires) in 1851 and 1868 at the junction of the Cannonball and Missouri rivers. The Cannonball empties into Lake Oahe, a portion of the Missouri River extending from near Bismarck, N.D., 230 miles south to Pierre, S.D. Lake Oahe is the Standing Rock Sioux Tribe’s primary source of domestic and irrigation water as well as a source of recreation for the region. The Missouri is in turn the main tributary of the Mississippi River.

Energy Transfer Partners, owner of the Dakota Access Pipeline, wants to move approximately 500,000 barrels of crude oil per day from the Bakken oil fields of North Dakota through South Dakota, Iowa and into Illinois. The pipeline contract is worth $3.8 billion. Present plans call for routing the pipeline under Lake Oahe. This portion of the route was originally planned to cross under the river near Bismarck, the capital of North Dakota, but the mapping was altered to avoid Bismarck. The pipeline reminds native people of ancient indigenous prophecies that told of a “black snake” that would cross the land and bring an end to the world.

The swirling water of a whirlpool at the mouth of the Cannonball River shaped river rocks such that the native people called it the River that Makes the Sacred Stones, thus the name of the camp where the water protectors converged. Like the whirlpool, this area has been a vortex of human and natural history. An estimated 300 to 400 Sioux were massacred by the U.S. Army in 1863 approximately 50 miles east of here in the Whitestone Massacre. In the late 1950s, the U.S. Army Corps of Engineers began building the Oahe Dam, which altered this portion of the Missouri River and displaced most of the tribal farming in the rich river bottomlands. During construction, the Corps dredged the mouth of the Cannonball River, destroying the sacred stones.

Historic Convergence
Over Labor Day weekend, we traveled to Sacred Stone Camp to offer support through donations of time, money, camping gear and a readiness to spread the word. As soon as we heard about this situation, we both knew we had to offer assistance to the tribes. Most participants we talked with had heard about it through Facebook and were drawn to come immediately as well. More than 200 tribes had already made the trek to Camp of the Sacred Stone by the time we arrived, and more continued to come after we left. This gathering of the tribes is a significant historical event since it is the first time the council fire has burned in more than 140 years.

After a formal procession into the sacred circle and a welcome by the Standing Rock Sioux Tribe, incoming tribes shared their flags, words of support, songs and dances. A number of Pacific Northwest tribes arrived by canoe after a two-day paddle down the Missouri River from Bismarck. Many Northwest tribes were represented at the council fire, including the Yakama Nation, Swinomish Tribal Community, Lummi Nation, Puyallup Tribe, Nisqually Tribe, The Suquamish Tribe, Lower Elwha Klallam Tribe and the Hoh Tribe.

The Sioux Nation has three regional dialects: Lakota, Dakota and Nakota. All three names mean friend or ally. The Sioux have 13 reservations in the Dakotas, Nebraska, Montana and Minnesota. They have been traditional enemies with the Crow Nation. The two nations recently reconciled to face a common foe in the oil industry, and while we were there a large number of Crow arrived at the camp to join the protest. By the time we left the camp, more than 200 out of 586 federally recognized reservations in the United States had posted their flags at the camp and offered support.

Several people from First Nations in Canada said the border crossing has been difficult for them, as the U.S. border guards are disrespectful and are aggressively discouraged them from entering the United States.

We met a civil engineer in camp who reported evidence that the pipeline company is buying defective pipes and valves to reduce costs. Even with premium materials, oil pipelines have been the source of spills and explosions on U.S. waterways. As of 2015, 55 oil and gas pipelines crossed the Missouri River. In 2015, the Poplar Pipeline leaked approximately 30,000 gallons of oil into the Yellowstone River at Glendive, Montana. In 2011, ExxonMobil’s Silvertip pipeline also leaked 50,000 gallons of oil into the Yellowstone River 20 miles upstream from Billings, Montana. The Yellowstone River is a tributary of the Missouri River.

Now, in September 2016, as bulldozers cleared the earth, hundreds rushed into the construction area to protect the sacred site. This was just one day after attorneys representing the Standing Rock Sioux Tribe filed evidence in federal court documenting the Dakota Access Pipeline’s proposed route through a sacred burial site. However, the pipeline contractors began bulldozing that sacred ground, and the people stepping in to halt the destruction were met by oil pipeline security guards armed with dogs and pepper spray. Several were bitten and sprayed, but they were able to stop the bulldozers and force the security personnel to leave the site. Despite being met with aggression, all who defended the sacred site did so through nonviolent action.

The opinion in the camp was strong that this was a deliberate act of destruction of sacred sites and that the pipeline contractors intended to destroy these sites before anyone could physically stop them. We arrived shortly after the incident and were invited to attend a sacred prayer circle at the desecrated site along with hundreds of others from the camp. As everyone walked a mile or so to the site, we were photographed by unknown people parked in cars along North Dakota Highway 1806. An oil company helicopter, a small fixed-wing plane and a surveillance drone were on patrol all day and continued to fly daily over the camp. This event is more evidence of the historic, unabated persecution of indigenous peoples in North America.

Roots of the Conflict
To understand the root of this conflict and the history of colonial and post-colonial government treatment of Native Americans, we learned you have to start with the Vatican. At the camp, we spoke with Phyllis Young, chair of the National Museum of the American Indian at the Smithsonian Institution. Young was a coordinator of the 1977 U.N. Conference for the Rights of Indigenous People in Geneva, Switzerland. She coordinates the Camp of the Sacred Stone, is an advocate for environmental protection and works to uphold the treaties between the tribal nations and the U.S. government.

According to Young, over the centuries popes have published numerous papal bulls, five of which have had hugely negative effects on tribes, Africans and non-Christians around the world. Of the five, the Papal Bull of 1493, the Inter Caetera Bull, has likely caused the most harm for indigenous people. The Inter Caetera Bull called for indigenous people to be subjugated so the Christian empire and its doctrines could propagate. This bull led to the passage of the Doctrine of Discovery in the United States.

In 1823, in the case Johnson v. M’Intosh, the U. S. Supreme Court allowed colonial powers to claim lands belonging to foreign nations. According to the court, title to lands “discovered” lay with the (nominally Christian) government whose subjects traveled to and occupied a territory whose inhabitants were not subjects of a European Christian monarchy. This “doctrine” allowed the colonial powers moving across North America to justify the genocide of the indigenous inhabitants of that continent for over 500 years.

According to Young: “The crying is over. We are moving aggressively forward. As women, we have the obligation to protect Mother Earth. We give birth in water. We are at a new threshold. We have reached the peak of spirituality.”

Young is currently involved in efforts to have the devastating papal bulls rescinded.

Perspectives From the Participants
We interviewed numerous people to get their thoughts on how others can assist the tribes with protecting the Missouri River and getting the pipeline stopped.

Betty Osceola of the Miccosukee Tribe, Florida:
“Use the power of the voice and tell social media and the politicians. We are having the same issues in Florida with the Sabal Trail Pipeline for natural gas.”

Martha Tommie of the Seminole Tribe, Florida:
“Humbly, we have to stick to prayers. We are here to support love, honor and respect for each other. It is time for unity.” Theron Iron Cloud, Lakota: “It’s not about physically being present at Standing Rock, it is about being here spiritually supporting the effort.”

Theron Iron Cloud, Lakota of the Standing Rock Tribe, North Dakota:
“Pray to stop the pipeline. It’s not about physically being present at Standing Rock, it is about being here spiritually supporting the effort.”

Dallas Goldtooth of both Dakota and Diné (Navajo) heritage is from the Lower Sioux Indian Reservation, Minnesota:
“It is most helpful if calls can be made to:
• Jo-Ellen Darcy, Assistant Secretary of the Army Corps of Engineers (Civil Works)           703-697-8986
• The White House to inquire why there has not been a full Environmental Impact Statement (EIS) on the entire pipeline and to make it happen. 202-456-1111
• All levels of public officials to find out where they stand.

Ask why we build such infrastructure for oil when we need renewable energy?
Make this a national issue.”

Colleen Johnson of the Confederated Tribes of Warm Springs, Oregon:
“Let others know we need supplies, monetary support for legal fees, to get word to politicians and others. How would they feel if we plowed Gettysburg?”

Phyllis Young, Lakota of the Standing Rock Tribe, North Dakota:
“We have to take war out of this nation.”

Winona Casto, Cheyenne River Sioux Lakota, head cook at the camp:
“I’ll be here to the end. I welcome all who can help. I’ll be drying squash, corn and meat for the long winter.”

Martina Smith, Ojibway Tribe 200 miles east of Thunder Bay, Ontario, Canada:
“It is historical that people across the world are coming here.”

United Voice Emerges
People of all races, from throughout the United States and Canada and as far away as Europe and New Zealand came in support of Standing Rock during our stay. The United Nations Permanent Forum on Indigenous Issues has agreed that the route for the pipeline was mapped without proper consultation with the tribal nations.

A united voice emerged at Sacred Stone Camp that said they will stay for the the duration and possibly become permanent. Items currently needed include large army tents, sleeping bags, warm clothes, boots and personal tents of all sizes, including tipis and yurts.
The camp hopes to set up solar panels and small wind generators for power, cabins, a schoolhouse for the children and medical facilities. They plan on building irrigated organic gardens, a greenhouse, clean kitchens for sharing food and are working to maintain legal and security assistance throughout the resistance. Funds contributed will help to assure the protest continues.

There is a GoFundMe page to help with these efforts at
https://www.gofundme.com/stand4standingrock

For background and updates, see  http://sacredstonecamp.org

The volunteer publication “Works in Progress” located in Olympia submitted this article to Whatcom Watch.

Karin Kraft is an artist and farmer in Olympia, www.theironhorsefarm.com. Aleta DeBee is a writer and researcher. A special thank you to Zoltan Grossman for reviewing this article for historical accuracy.